Narwhal Genome Reveals Another Way That Narwhals Are Weird

One of the most recognisable animals of the sea, the narwhal, is even more unique than their looks would suggest, according to a new study of their genetics released last week.

It found that the genetic diversity of these horned whales is astonishingly low compared to similar animals living in the arctic waters. Yet, despite this low genetic diversity, long considered a harbinger of a species’ pending doom, narwhals have thrived for a million years and even rapidly grown in population recently, with no signs of stopping soon—at least if we humans don’t threaten their existence with climate change.

Though some DNA evidence from narwhals, or Monodon monoceros, had earlier suggested these animals were light on genetic diversity, there hadn’t been a deep dive into their genetic structure, or genome. So Danish researchers at the Natural History Museum of Denmark (affiliated with the University of Copenhagen) sequenced and studied the genome of a narwhal living in West Greenland. They also compared these genes to those of other marine animals that reside in the Arctic, such as beluga whales (a close cousin), polar bears, and walruses.

Compared to these animals and others, they estimated that the genetic diversity of the narwhal population was very low, meaning that narwhals don’t carry many genetic variations between them. Ordinarily, that’s a big sign of trouble for a species, since it can mean the population has dwindled so low over time that they’re forced to mate with their close relatives (and inbreeding can then raise the risk of dangerous, life-threatening mutations). Or it can mean that a recent calamity had wiped out most of their population, something scientists call a bottleneck event. 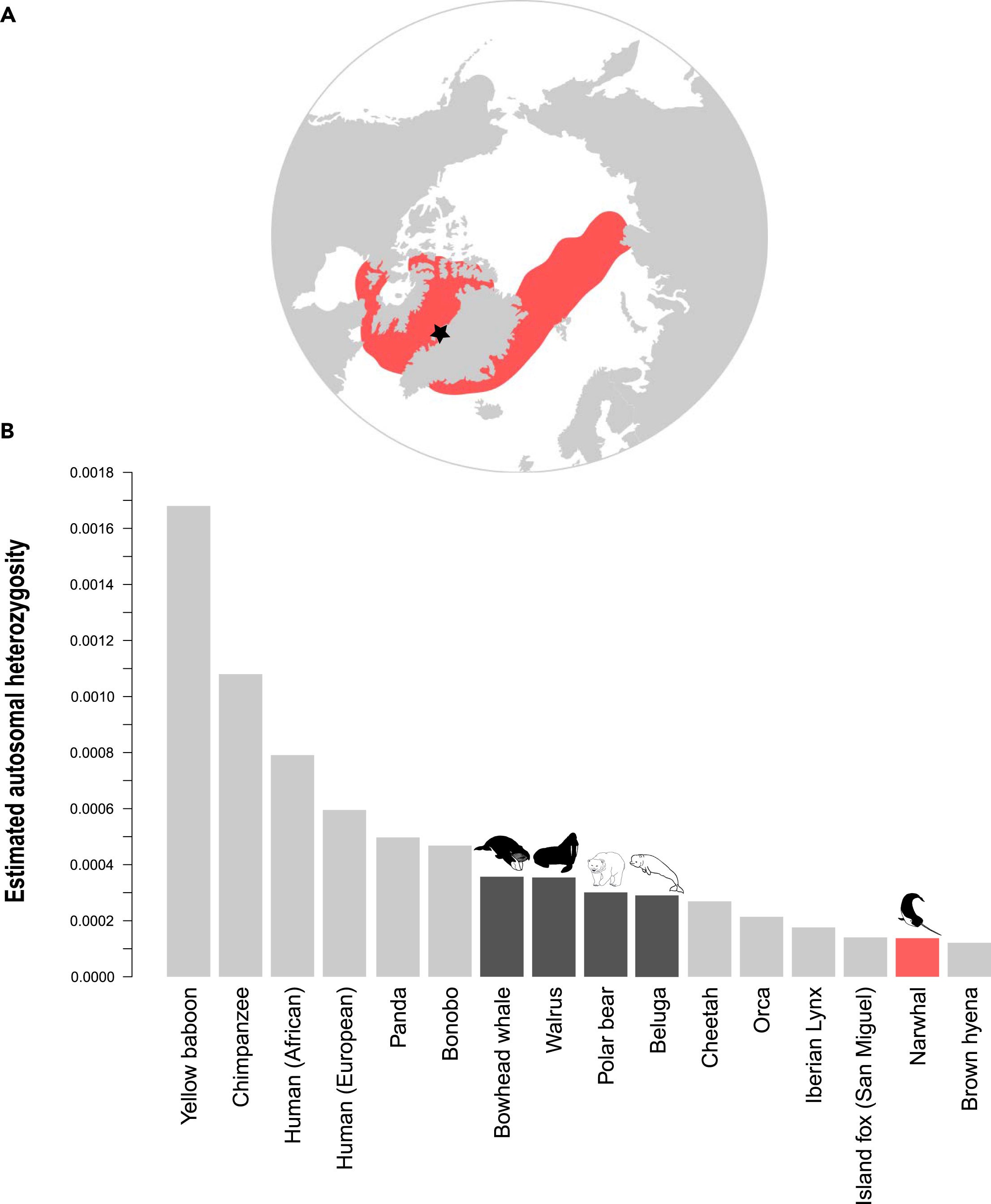 Above, a map of the narwhal’s distribution in the Arctic; below a graph of the narwhal’s genetic diversity compared to other animals, with similar marine animals in black (Graphic: Lorenzen, et al/iScience)

But the researchers found no evidence of much inbreeding in narwhals, and their population is plainly doing just fine. At last count, there were around 170,000 narwhals in the world, a number that actually convinced the International Union for Conservation of Nature to recently move narwhals from the status of “nearly threatened” to “least concern.” And as far as the researchers can figure, there’s been a relative boom in narwhals in the last 30 to 40 thousand years.

The team’s findings were published in iScience.

“There’s this notion that in order to survive and be resilient to changes, you need to have high genetic diversity, but then you have this species that for the past million years has had low genetic diversity and it’s still around—and is actually relatively abundant,” said Eline Lorzenen, an associate professor and curator at the Natural History Museum of Denmark, in a statement.

Lorzenen and his team theorise that since narwhals have lived in such a specific niche, the Arctic, and in relatively low numbers for much of their million-year history, there was never much need for them to become genetically diverse. They could have also evolved different ways to cope with less genetic diversity. But if the species does continue to thrive over a long length of time, the researchers wrote, they may very well become as genetically diverse as other species of their size and population tend to be.

Not all is necessarily well in narwhal land, though. Since these creatures only live in the Arctic, they’re especially vulnerable to the environmental pressures that climate change is already bringing, and will continue to bring, to the region. And there’s no clear road map as to how these animals will navigate these increasingly turbulent waters.

“Our study can’t comment on whether narwhals will be able to adapt, or if they have the plasticity to be resilient in these rapid changes,” said Lorenzen. “But what we can say is that they have had this low genetic diversity for a really long time and they’re still around.”

Narwhals aren’t the only animals that are forcing scientists to rethink the common narrative that genetic diversity is a universal strategy for a species to stay healthy either. Brown hyenas and orca whales may also break this rule, and the researchers expect that we’ll discover more species that do the same the more genetic data we collect.