Newly Discovered Cousin of T. Rex Was a Pint-Sized Killer

Palaeontologists have identified a previously unknown relative of T. rex that stood just below 3 feet at the hip. The discovery is shedding new light on the evolutionary origins of tyrannosaurs, while providing a glimpse of these fearsome creatures before they reached enormous sizes.

The name Suskityrannus hazelae is derived from the local Zuni word for coyote, the Latin word “tyrannus” meaning king, and from the name Hazel Wolfe, a supporter of fossil expedition in New Mexico. 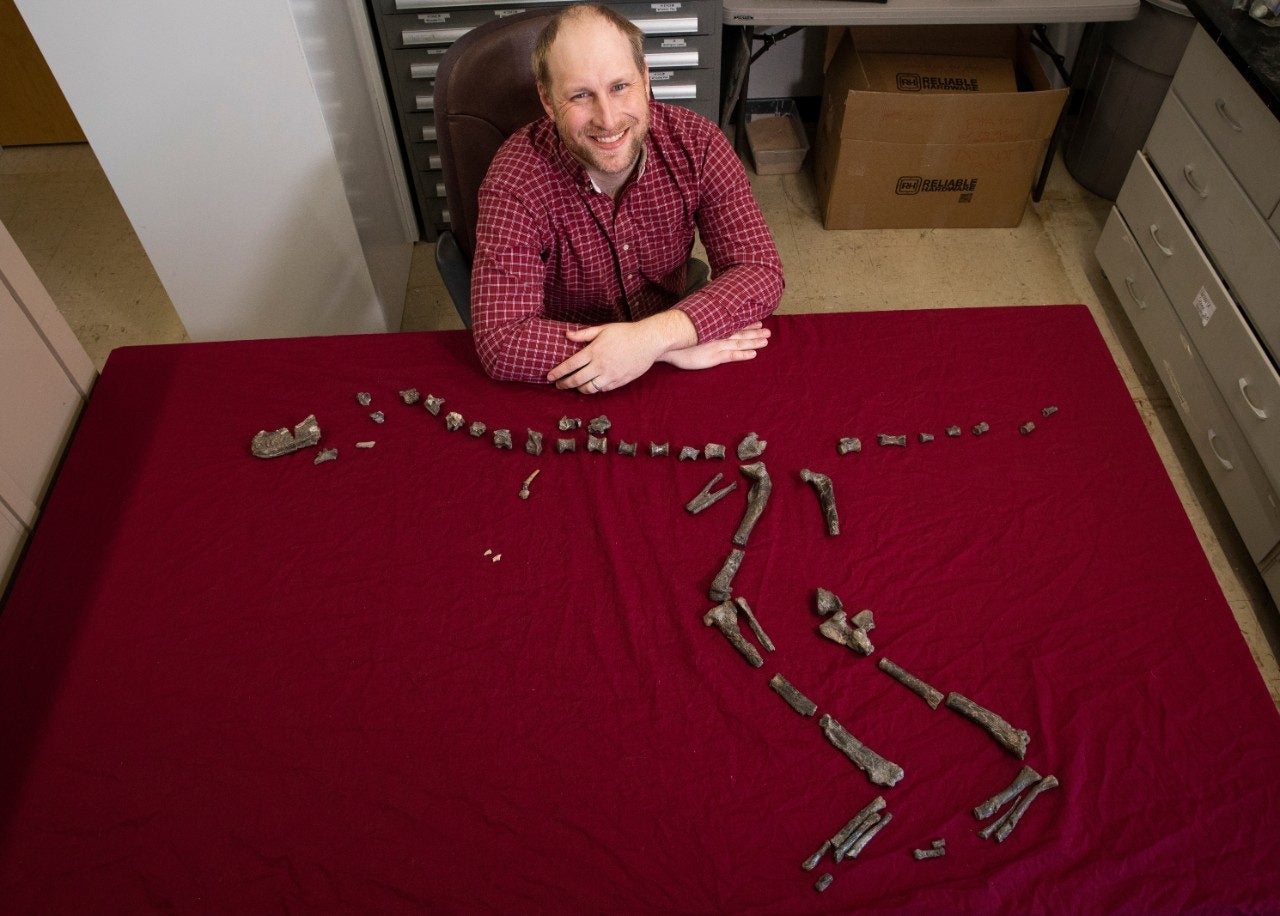 The newly described species is known from a pair of juvenile skeletons, which were found about 165 feet (50 meters) from each other in the Zuni Basin of the US state of New Mexico. The first skeleton was discovered in 1997 by Robert Denton, who’s currently a senior geologist with Terracon Consultants. The second, more complete skeleton was discovered by Nesbitt in 1998. Remarkably, Nesbitt was a 16-year-old high school student at the time, and he found the bones while participating in a palaeontological expedition led by Doug Wolfe, a co-author of the new study and a palaeontologist at the Zuni Dinosaur Institute for Geosciences.

For years, the scientists weren’t sure with what they were dealing with, figuring the remains belonged to some kind of dromaeosaur, like a Velociraptor.

“We did not know these fossils represented a tyrannosauroid for more than a decade after they were discovered,” Nesbitt told Gizmodo in an email. “It was after many new, small tyrannosauroids from China and North America were found that we could compare our specimen to these others.”

And indeed, the discovery connects older and smaller tyrannosauroids from North America and China with the enormous tyrannosaurids that emerged during the Late Cretaceous.

“Suskityrannus helps us constrain the time that large tyrannosauroid dinosaurs got big—sometime after approximately 92 million years ago—and became the biggest meat eaters at the time,” said Nesbitt. “More broadly, tyrannosauroids go back to the Middle Jurassic, around 160 million years ago, but it is only at the end of the Cretaceous that they got big.”

Nesbitt said the new dinosaur fills an important evolutionary gap, but it would be a mistake to call it a “missing link.” Suskityrannus “represents a side-branch of the [tyrannosauroid] family” and is “not a direct ancestor” of T. rex and other big tyrannosaurs, he said. 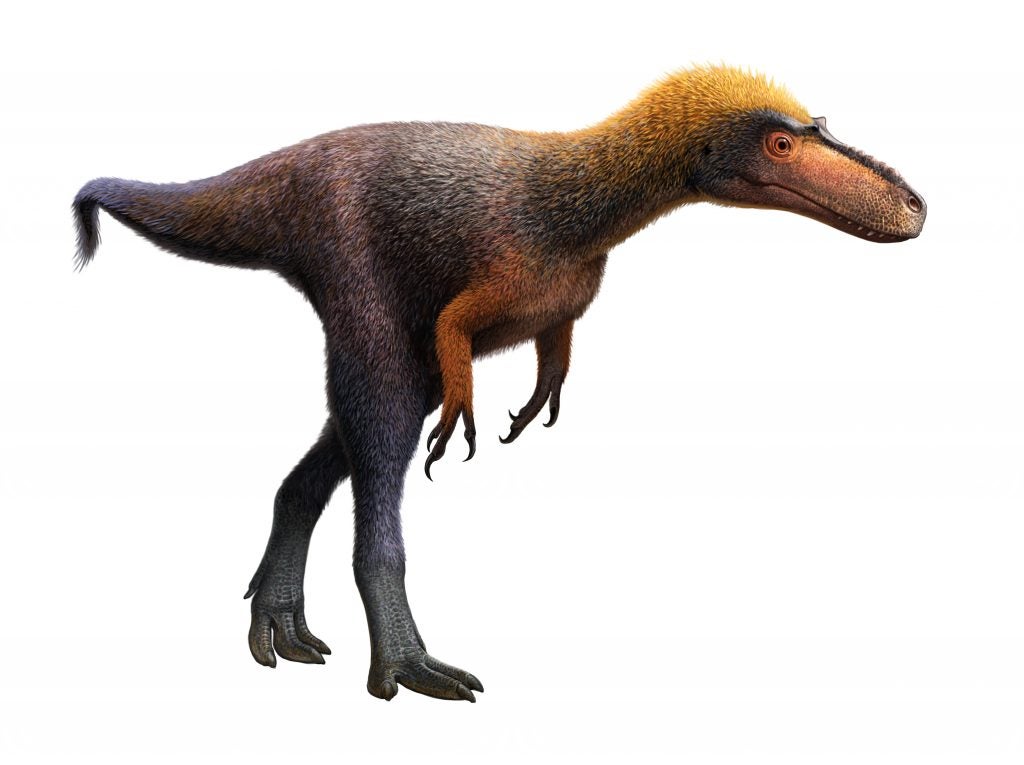 In terms of its unique physical characteristics, the bipedal Suskityrannus had long feet, a strong bite, and sharp, serrated teeth—features consistent with a fast-moving carnivore. It likely lived in a wet, swampy environment and feasted on hadrosaurs, ankylosaurs, and other prey, according to Nesbitt.

A decent portion of the skeleton was represented in the two specimens, but some parts of its skull, hands, and feet were missing. Scientists don’t know if Suskityrannus had small arms like T. rex or if it had two or three fingers.

In an email to Gizmodo, palaeontologist Thomas Carr from Carthage College said an added bonus of the new study is that Suskityrannus is represented by “more than one scrappy skeleton.” The finding is important, he said, because it shrinks the time gap between the small, intermediate-grade tyrannosaurs and the big ones. But that still means a 12-million-year time gap exists between “the first of the big tyrannosaurus and the ancestral representatives of the two main stocks of the giants, namely the Albertosaurus line and the tyrannosaurine line,” said Carr, who was not involved with the new study.

For Brown University PhD candidate Armita Manafzadeh—also not affiliated with the new work—the most interesting aspect was the “arctometatarsalian” foot, which she said is “secretly the most exciting part of this paper.”

“In an arctometatarsalian foot, the three long bones that make up the sole of the foot are pinched together, with the middle bone being particularly skinny. Most dinosaurs and other reptiles have roughly cylindrical sole bones like us,” wrote Manafzadeh in an email to Gizmodo. “This foot morphology has only been found in a few groups of Cretaceous theropod dinosaurs, and several biomechanical hypotheses have been put forward linking it to improved running ability.”

The new paper is thus significant in that “the foot of Suskityrannus is now the earliest known record of an arctometatarsalian foot in a tyrannosauroid,” a discovery that “has the potential to help us better understand the evolution of running ability in dinosaurs,” she said.