There Aren't a Lot of Good Wireless Xbox Headsets. This Is a Damn Good One

Last year, the SteelSeries Arctis 5 won our battle to crown the best gaming headset under £120, so when I heard SteelSeries was working on a new wireless headset made specifically for the Xbox, naturally I was intrigued.

Typically, the problem for Xbox One owners is that because the console doesn’t support Bluetooth or standard USB audio, you can’t really use traditional wireless headsets on an Xbox. So on the Arctis 9X, Steelseries built Xbox Wireless support directly into the headset. You can get cord-free audio without even needing a separate dongle.

What is it?: A wireless headset designed specifically for the Xbox One
Price: £180
Like: Very comfortable, supports dual wireless connectivity, retractable mic
Don't Like: Pricey, no onboard battery indicator, needs a separate dongle for connecting to PCs

Pairing the Arctis 9X is also dead simple. You just turn the headset on and connect it to the Xbox like you would a controller, and that’s it. But SteelSeries didn’t stop there, because in addition to Xbox Wireless support, the Arctis 9X’s also have Bluetooth audio support so you can get audio from an Xbox and your phone at the same time.

It’s a pretty handy feature that allows you to listen to music or hear incoming notifications on your phone while gaming, or take a call without needing to yank your headset off.

On top of that, whenever you’ve had enough fragging for the day and want to go outside (gasp!), you can bring the Arctis 9X with you and use them as if they were normal over-the-ear headphones. Just so long as you don’t mind a few stares from people checking out your giant cans.

The Arctis 9X also offers pretty substantial battery life, and based on my experience, they totally live up to SteelSeries’ runtime claims of around 20 hours on a single charge. That means in the real world, unless you regularly engage in some marathon gaming sessions, I found that you only need to recharge the 9X about once, maybe twice a week. And that’s even when it’s connected to two devices. 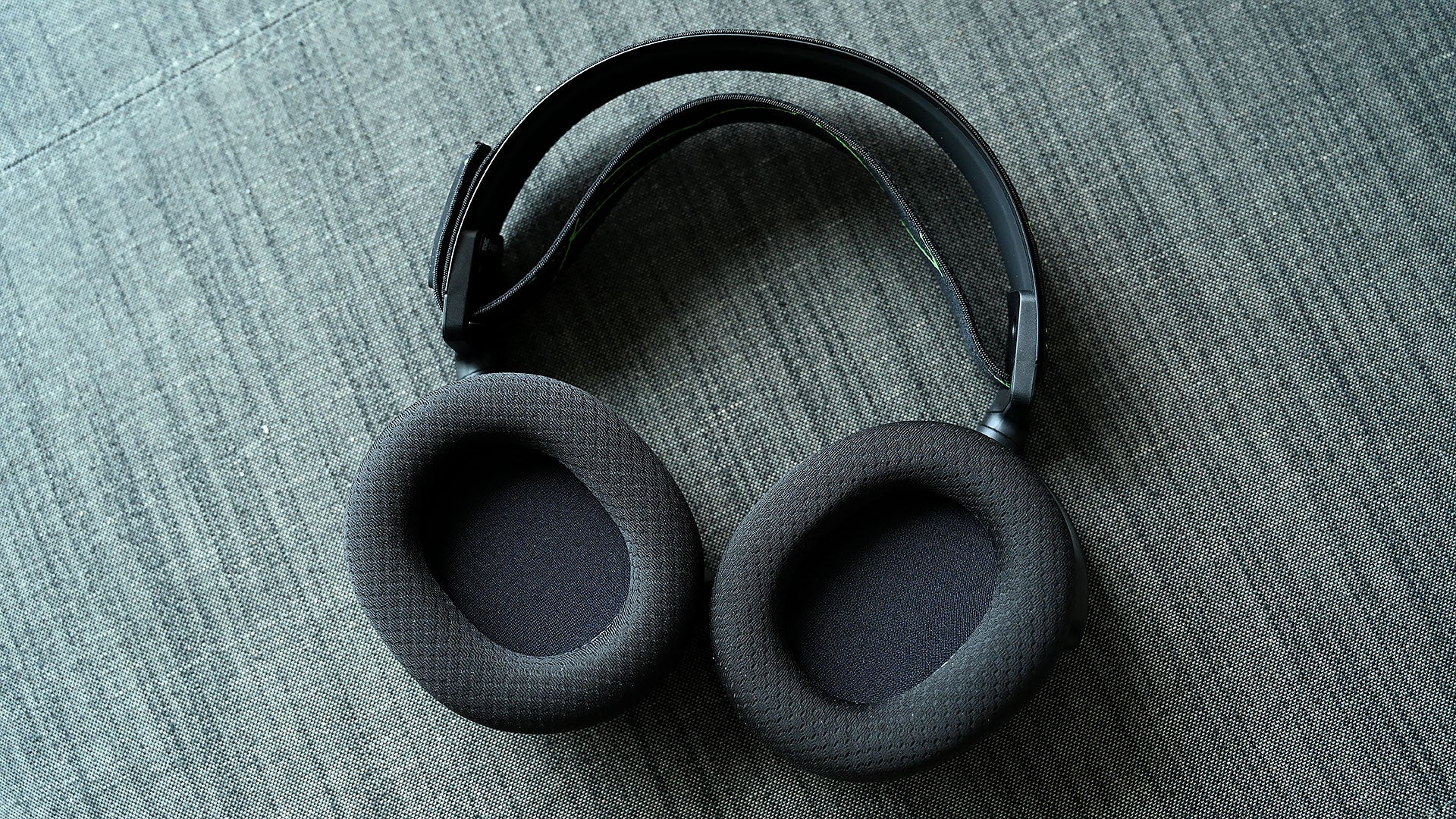 As for audio, the Arctics 9X acquit themselves quite well, with crystal clear voice pickup from the SteelSeries’ retractable mic, while the semi-closed back cups do a fair job of passively cutting down on outside noise. The Arctis 9X also come with support for Windows Sonic Spatial Audio, which helps add a little extra dimensionality to sounds like footsteps or explosions. 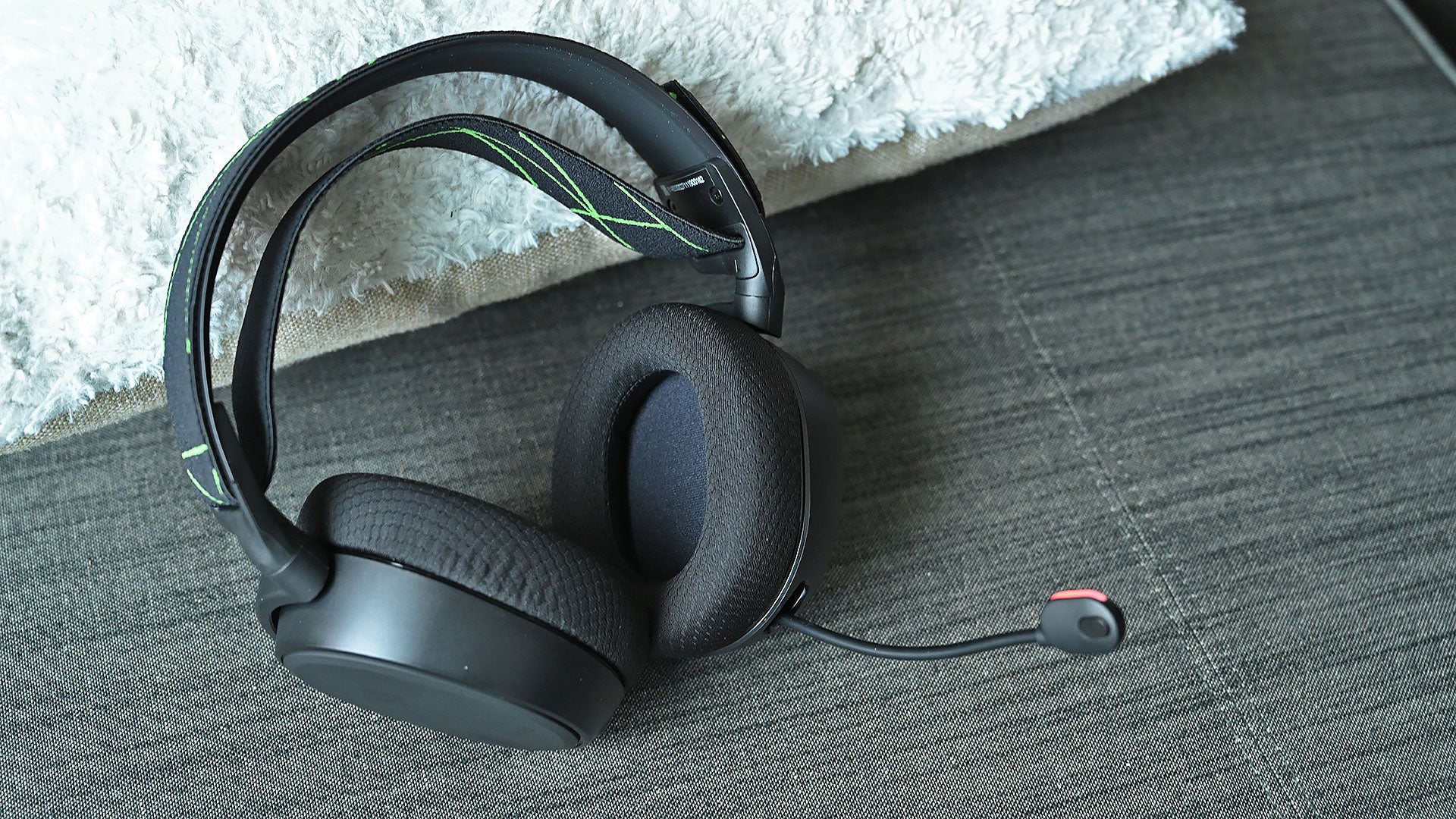 The Arctis 9X have the same general design as the previous SteelSeries headsets, but with a splash of green, because that’s the Xbox colour. (Photo: Sam Rutherford/Gizmodo)

That said, at first I thought the Arctis 9Xs sounded a bit light on bass, but after quickly playing around with the headset’s four built-in EQs, that issue went away. (You can customise sound even further by connecting the 9X to the SteelSeries desktop app). I also noticed that the 9X’s cool foam earpads are actually a tiny bit thicker than what you get on the Arctis 5, and when you combine that with SteelSeries’ ski-band head strap, you end up with a supremely comfortable headset.

Like previous Arctis headsets, the 9X comes with a dedicated mute button (though retracting the mic will also automatically mute the mic), separate wheels for both volume and adjusting the balance between game audio and voice chat, and two buttons for power and Bluetooth. 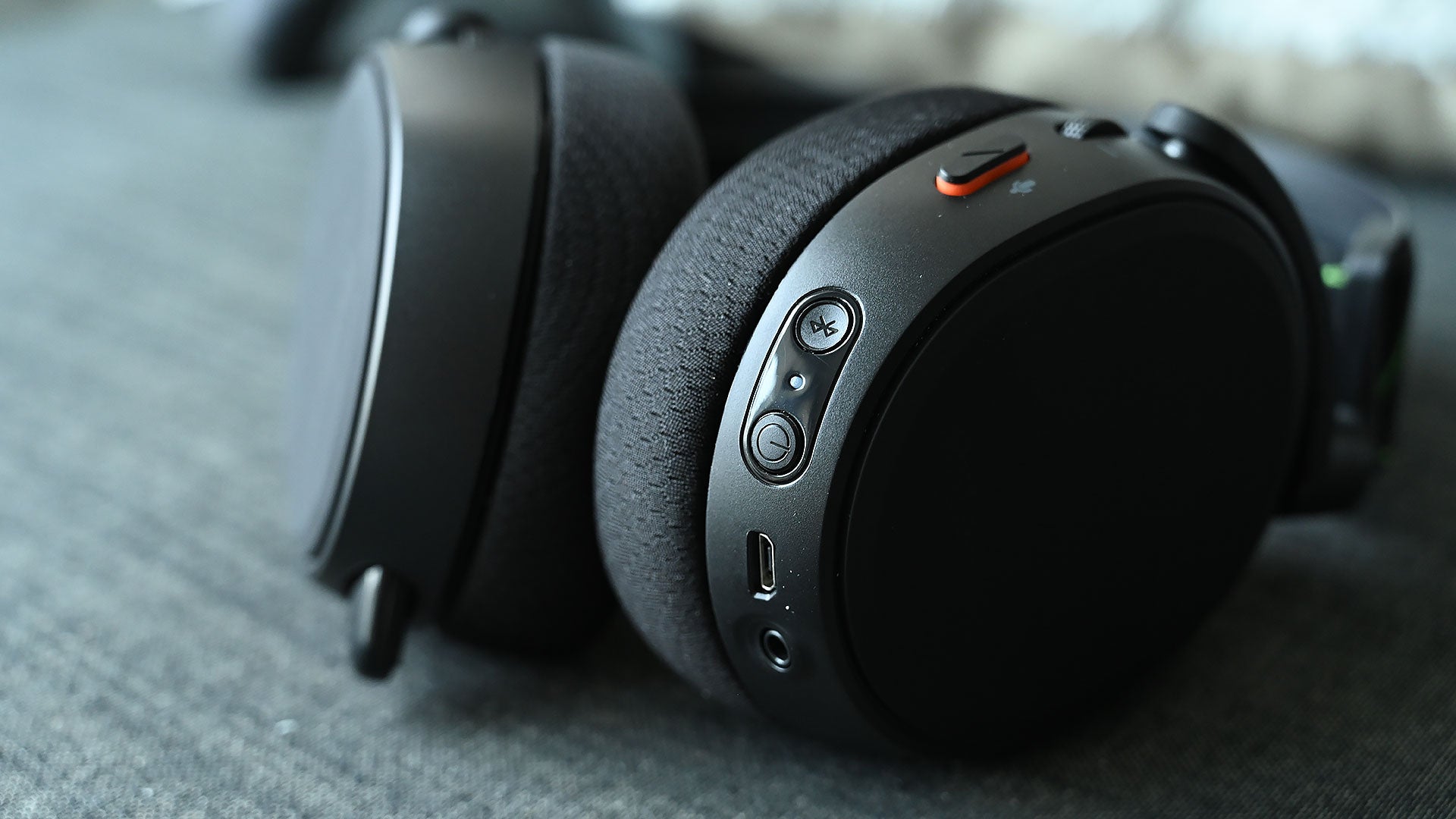 The Arctis 9X also comes with a standard 3.5mm jack, so you can use them as a wired headset in a pinch. (Photo: Sam Rutherford/Gizmodo)

One interesting quirk I found is that because of the 9X’s Xbox Wireless support, you can even turn on your Xbox simply by tapping the power button on the headset. However, I’m not sure how useful that feature actually is, since you can also turn on the console using an Xbox controller, which you would need to pick up anyways to play some games.

The Arctis 9X’s aren’t perfect though. Even though the 9X uses a microUSB port for recharging, which is the same port Microsoft puts on Xbox One controllers, I kind of wish SteelSeries had opted for USB-C instead. There’s also no battery life indicator on the headset itself, which means the only way to see how much juice you have left is to go into the devices menu on your Xbox. But that solution isn’t super useful if you happen to be using the 9X as Bluetooth headphones. 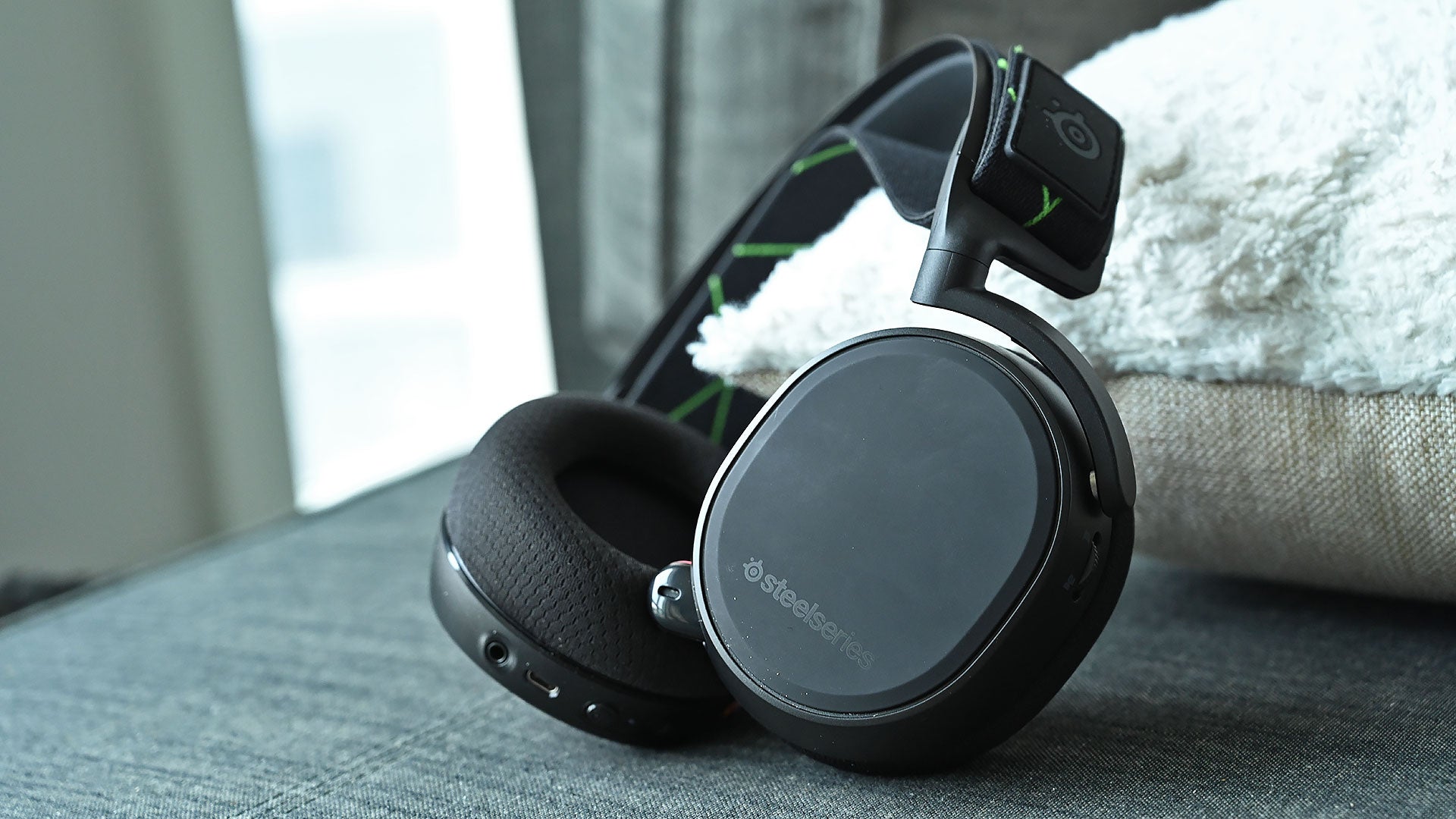 If you do receive a call on Bluetooth from your phone while gaming, to prevent any confusion, in-game voice chat gets disabled until the call is over. (Photo: Sam Rutherford/Gizmodo)

Meanwhile, for gamers who play on both Xbox and PC, in order to get wireless audio from the 9X working on a laptop or desktop, you’re going to need an extra dongle. Thankfully, if you already use an Xbox Wireless Adapter for pairing an Xbox One controller to your PC, you’re already covered, as that’s the dongle you need.

But perhaps my biggest concern is the pricing. At £180, the Arctis 9X definitely aren’t cheap. That’s £20 more than SteelSeries’ previous wireless headset, the Arctis 7, and around £30-£35 more than current going price for LucidSound’s LS35X headset, which also has Xbox Wireless support. Yes, the Arctis 9X has better battery life and more features than the LS35X, but that’s still a big pretty price gap, especially for anyone on a budget. 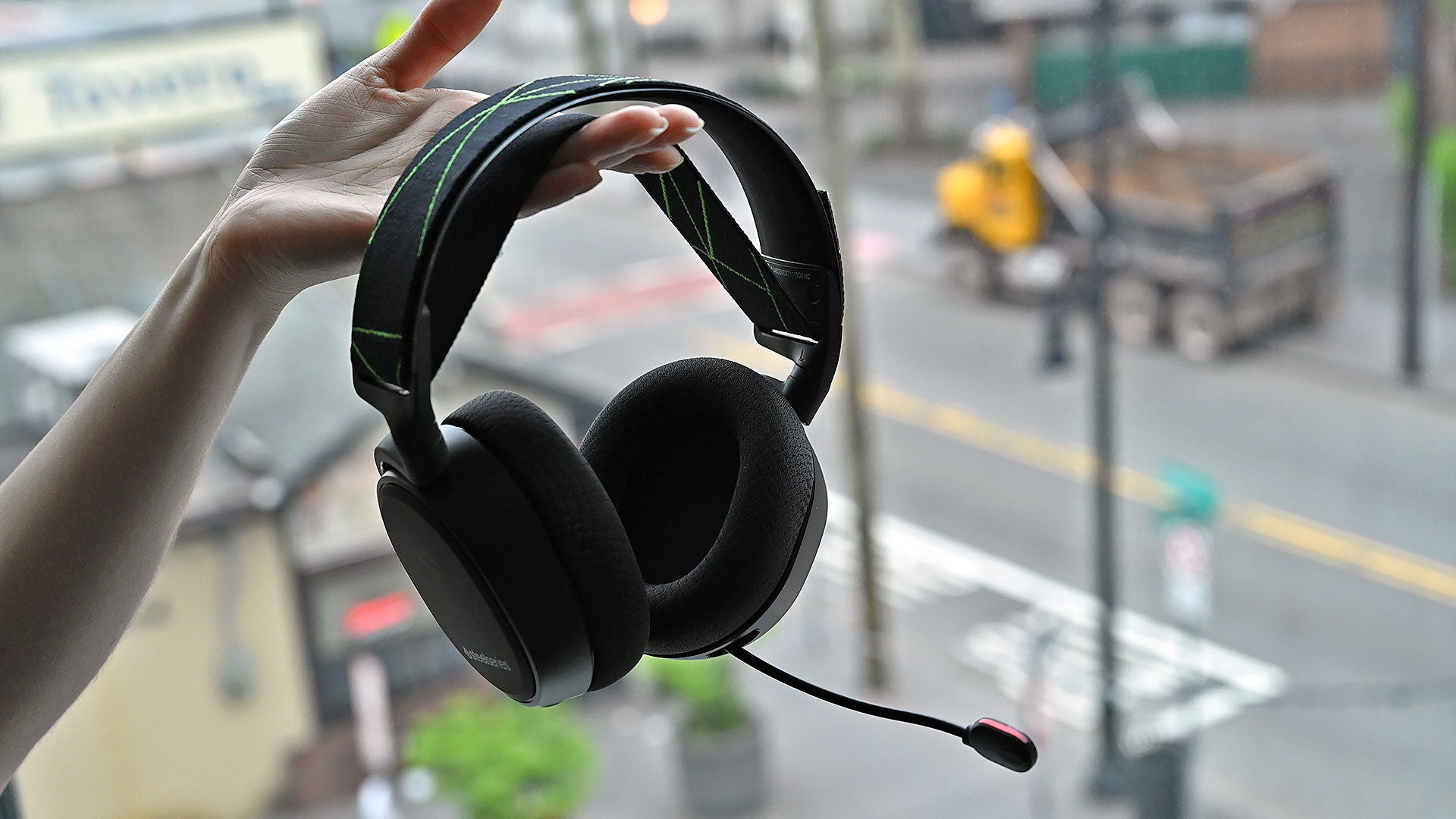 But if you want a super comfy high-quality headset that works on more devices than just your Xbox, the Arctis 9X is definitely a solid contender.