If you’ve suffered the throes of chronic insomnia, you’ll do almost anything to fall asleep. Pills, guided meditation apps, vigorous exercise, melatonin, screen dimmers, aromatherapy diffusers, sleep tracking via fitness tracker, smart beds, bedtime calculators—at some point or another, I’ve tried them all and probably spent an absurd amount of money in the pursuit of a restful night. So what’s the harm in trying an expensive bean-shaped cuddle robot meant to help you fall asleep faster?

What is it?: A robot that mimics breathing to help you fall asleep faster.
Price: $600 (£474)
Like: Doesn't fart in your face as a pet would.
No Like: Buggy bluetooth. Pricey. Not practical if you have pets or a sleep partner.

The premise of the Somnox Sleep Robot is it mimics the breathing of a sleeping partner. That in turn, is supposed to help you fall asleep faster. It’s padded for maximum cuddles and spooning, and can also play soothing white noise tracks. As for programming the bot, you can do that via the Somnox companion app.

I first encountered Somnox at a consumer electronics showcase about a year ago. Back then, I was plagued with the worst insomnia of my life—think six months of sleeping a maximum of three hours a night. To my sleep-deprived brain, Somnox’s in-and-out breathing was as creepy as it was intriguing, and I handed my card over to a Somnox rep with a beleaguered, “Let me know when this thing is ready for reviews.”

A year later, I’ve finally got about three weeks of cuddle time with the Somnox and I still can’t tell if I’ve been swindled.

The first few nights with the Somnox were downright weird. After turning out all my lights and turning on the bot, I found the default breathing rate to be way too fast. Trying to match my breathing to the rise and fall of my bean bot’s “breathing” made me light-headed and stressed—the opposite of what it was supposed to make me feel. The next night, I hopped into the app to lower the breathing rate but took it a little too far. This time it felt like I was suffocating because the bot was breathing too slowly. 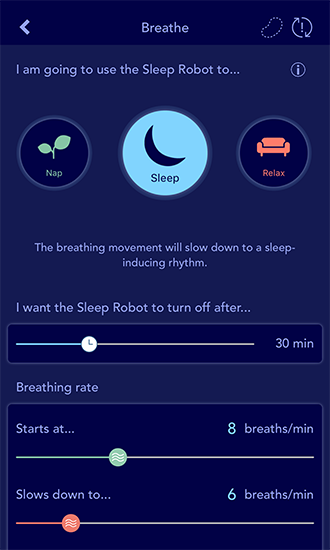 You can edit the Somnox robot’s programming in the companion app, but Bluetooth is pretty patchy. (Screenshot: Victoria Song/Gizmodo)

The audio tracks were also more distracting than soothing. For me, the only relaxing options were the “Cosmic” mixes, which sort of sound like the mating calls of ancient space whales run through a synthesizer. Then again, this might be a matter of preference. If you like white noise machines, this feature might be a tad more useful. I ended up just turning the volume down entirely. The sound of the bot’s motor was also distracting those first few nights. Eventually, I was able to ignore it. Yet combined with my frustration regarding breathing rate, I’ll admit a few nights I just gave up, patted the bean bot on the side, and opted to count sheep instead.

A Somnox representative warned me that most people take a few nights to get used to the robot. After a few more nights of trial and error, I settled on a starting rate of 8 breaths per minute, slowing to 6 bpm over the course of thirty minutes. To my surprise, once I found a rate that was comfortable, it was easier to shut my brain off and drift off. When I was bone tired but mentally wired, I also found the Somnox rather helpful at coaxing me into a short nap.

There’s one huge caveat. This only ever worked provided every other condition in my bedroom was perfect, peaceful, and without distraction.

That is to say, the bot is sort of only practical if your bed belongs to you and you alone. Some nights, I’d curl up with the Somnox to find my dog irrationally jealous and determined to get between me and this unnamed interloper in her territory. Other nights, the bot’s space whale tracks kept my partner up and I’d get a polite request to maybe try again another night. My arsehole cat was also a fan of knocking the bot out of my arms and onto the floor, just because. 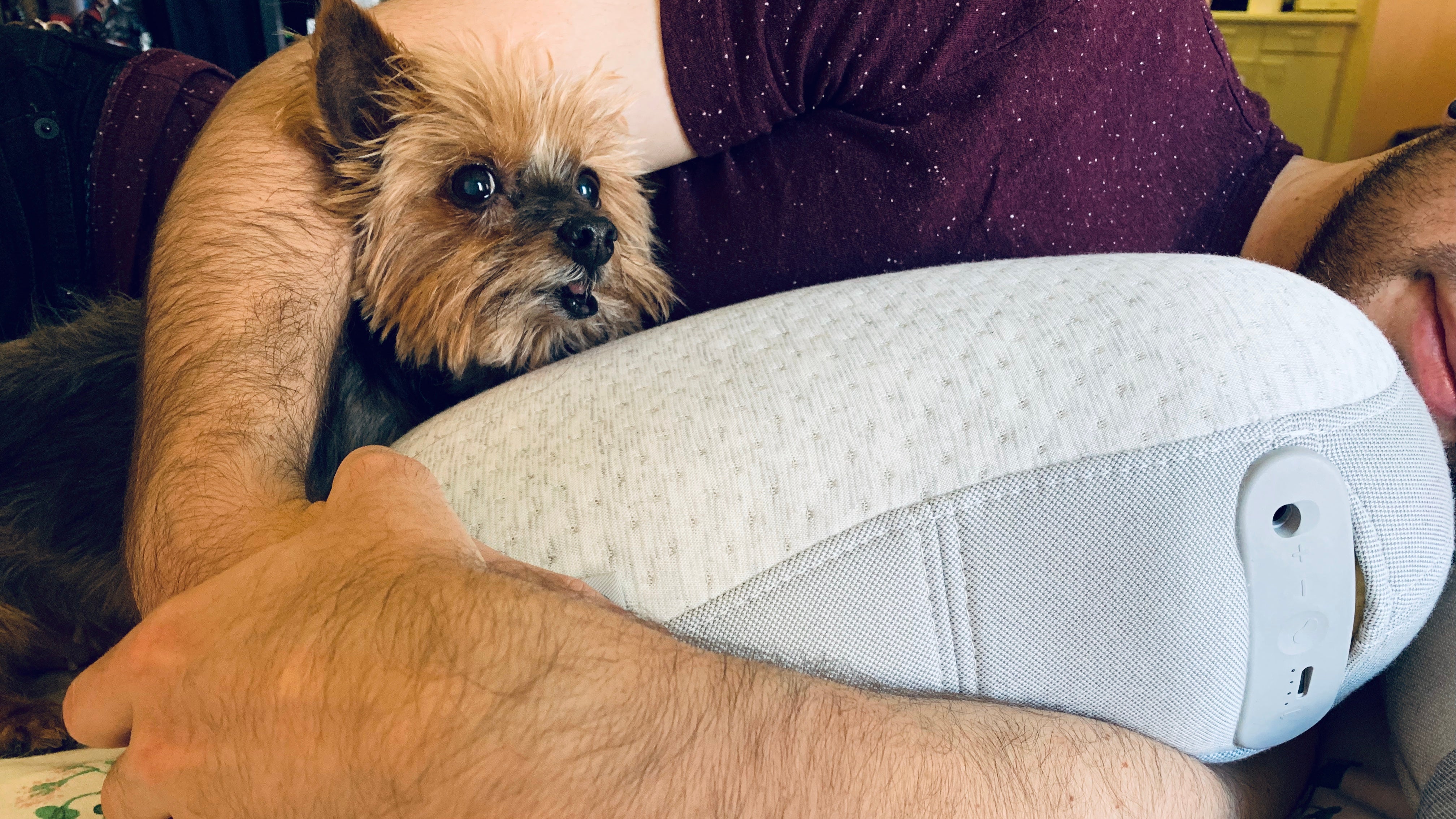 The dog is not a fan. She will regularly try and squeeze between her humans and the Somnox. (Photo: Victoria Song/Gizmodo)

The truth is, more nights than not, the Somnox wouldn’t get the chance to serenade me to sleep. Or if it did, it ended up on the floor. It’s not that the robot is uncomfortable to spoon. The bean-shape lends itself really well to that, once you figure out which way is most comfortable for you. The robot is also fairly well padded, though it’s rather firm—not at all soft and squishy like, say, teddy bear or a chubby cat. Think more like a pillow that’s somehow managed to get a six pack abs at the gym. At four pounds, it’s also heavier than you might expect. I never quite got used to rolling over with the Somnox.

There were a few other technical issues with the Somnox. It pairs with the companion app via Bluetooth, but I constantly had to re-pair the bot every time I reopened the app. I also wasn’t always 100 per cent certain after I adjusted the bot’s programming that it actually accepted the changes. That was mostly moot once I found the settings that worked for me but getting there was more frustrating than it should have been considering the $600 price tag. 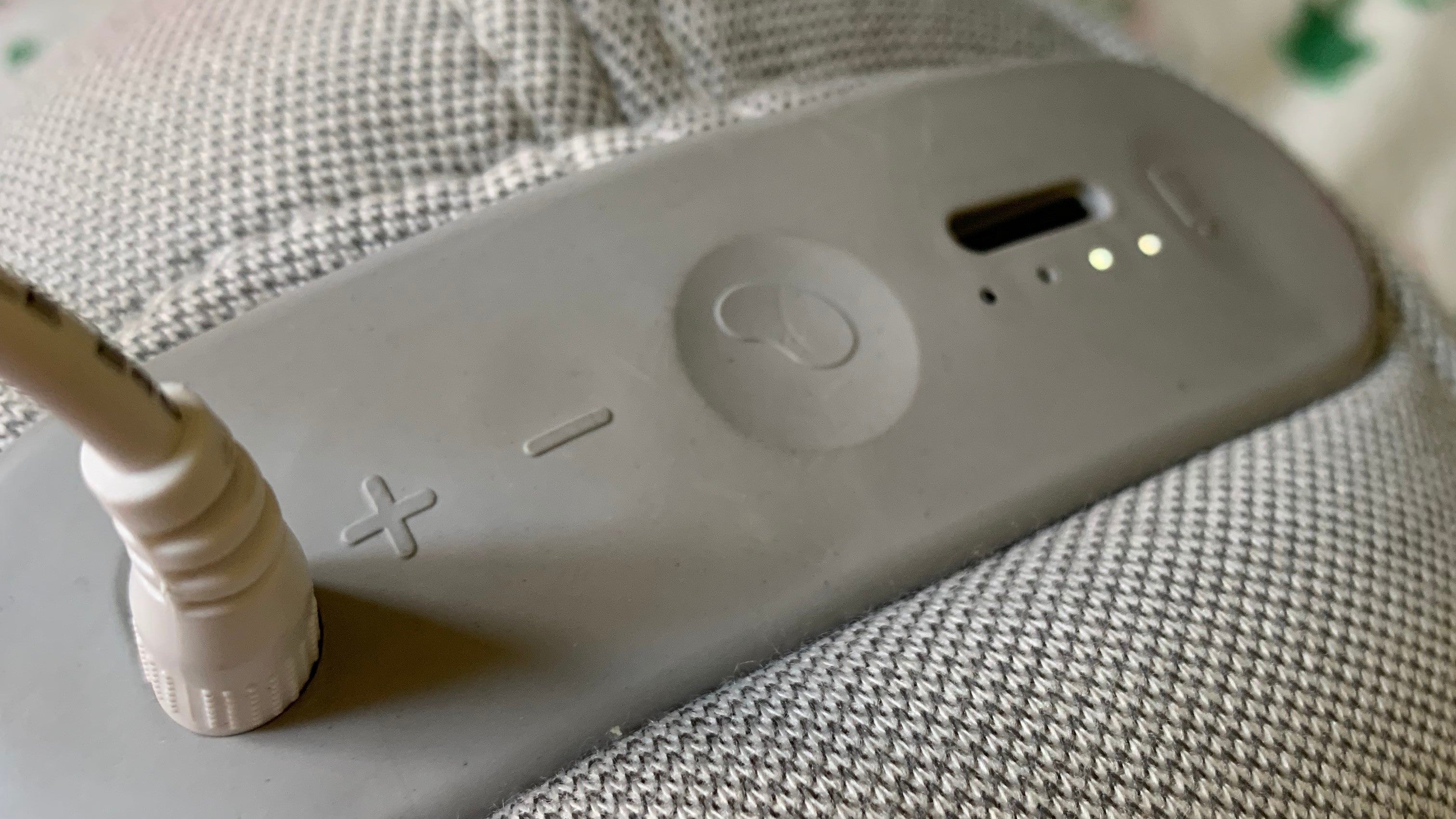 You use this panel to control volume, turn the bot on or off, and view battery charge. (Photo: Victoria Song/Gizmodo)

It was also hard to tell when I’d actually turned the Somnox on. Figuring out what button to press was simple enough—it’s the big ol' bean shaped one in the middle. To turn it on, Somnox’s instruction manual says you just hold it down until you see its chest light up and it starts breathing. On average, I’d have to do this a couple of times for it to actually work. It could be that I wasn’t pressing hard enough—you can see the indents my nails made in the button in the above photo—but overall the process was more finicky than I’d have liked.

For those wondering how the Somnox stacks up against cuddling with a pet or a person, it’s not really a contest. If you have a living, breathing sleep buddy that lets you snuggle them, that is infinitely more satisfying. For all its high-tech design, the Somnox is still a slightly-too-firm, cold robot. Though, if your pets or loved one is a grumpy snuggle hater, or if you’re allergic to fur, the Somnox is a close-enough facsimile of physical contact and probably more satisfying than one of those anime waifu pillows. It also has the benefit of not having morning breath, hogging the blanket, farting in your face, or smacking you awake in the morning to be fed. (All things my loving pets and partner have done in the past week.) 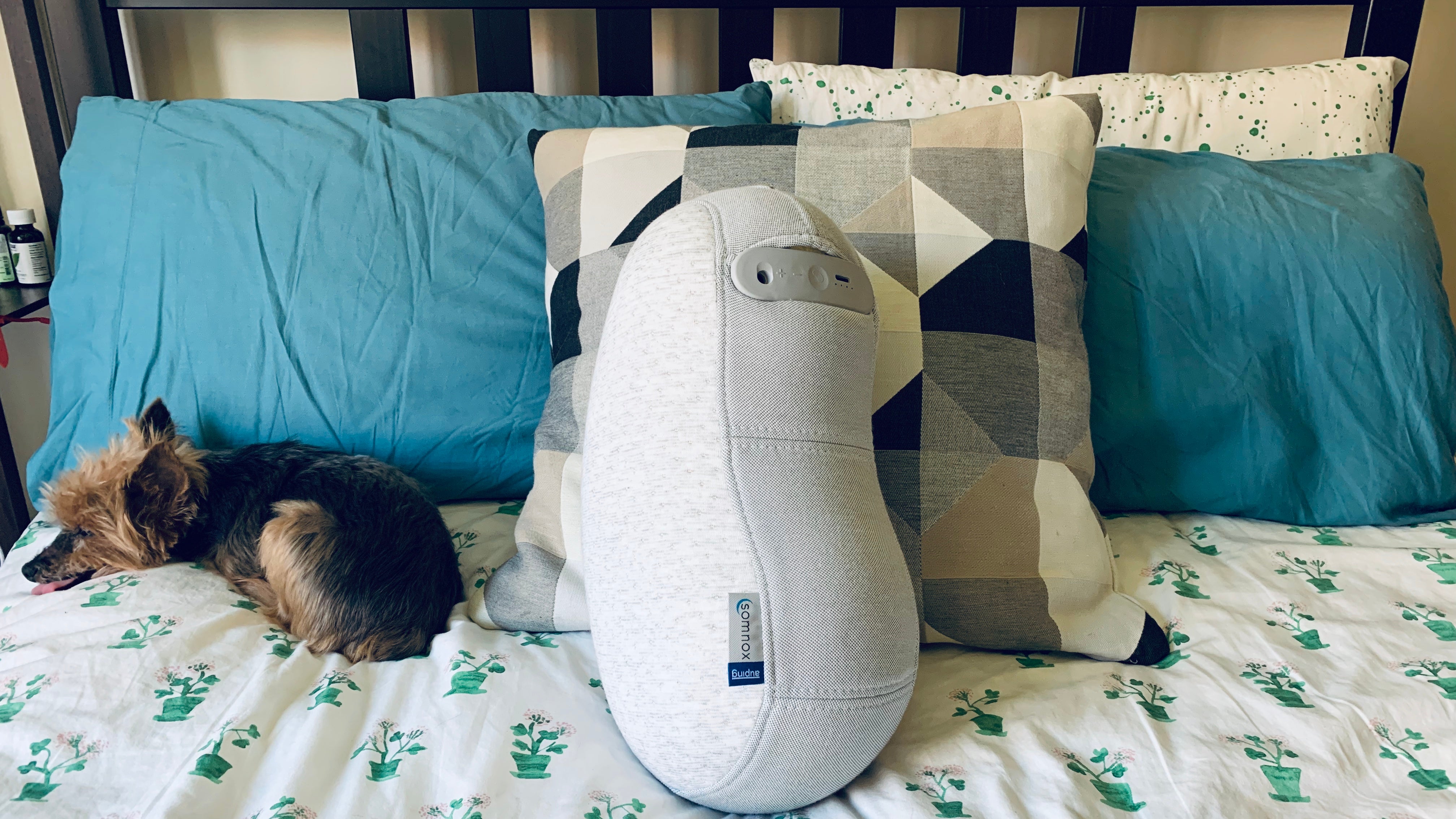 Small dog for scale. The bean-shaped Somnox is good for spooning, but at four pounds, it’s a bit hefty when rolling over. (Photo: Victoria Song/Gizmodo)

As to whether Somnox helps you sleep better, it’s a toss-up. I’m not sure if my later successes with the robot were the result of it actually working or some sort of placebo effect. While I think the Somnox would be great for one-off naps, or when my partner is out of town, it’s hard to justify shelling out $600 when you consider the buggy connectivity and the fact that pets, while more expensive in the long run, offer way more as nap buddies.

Still, as someone with a bad case of chronic insomnia, I get it. Sometimes you’ll just plop down however much based on the glimmer of hope it’ll help. I ultimately found some success with the Somnox, but it just wasn’t a good fit into my everyday life. Truthfully, I’d imagine it only really works for a specific type of person—someone exhausted, desperate for sleep, with no other breathing lifeform to hold. And that...just kind of makes me sad.