We Found the Sub-£2500 Home Projector That's Actually Worth It

By Alex Cranz and Raul Alexander Marrero on at

Buying a projector is a much more intimidating prospect than buying a TV. You can at least go see most televisions in a store, and once you’ve made your purchase, setting it up can be as simple as putting it on an entertainment stand and plugging it in (though a quick calibration is a good idea too). With a projector, you have to worry about the right lighting and right screen and even focusing the dang thing. Can you find a decent projector that’s not a pain to use without bankrupting yourself? We aim to find out.

Projectors can be worth it though! While a TV has a fixed image size, projectors can cast on a screen and give you a TV-size picture (think 50 inches) or a movie size one (think over 100 inches). Home installers also love projectors because you can hide both the projector and the screen so a big black monolith doesn’t have to be the centrepiece of a room.

There are a variety of projectors available that use different lighting technologies to cast an image up on a wall or screen. Higher-end projectors use lasers to create super bright images with super accurate colours, but laser projectors are prohibitively expensive. We set out to find the best projector under £2,500, and these all use a series of colour filters placed in front of a lamp to produce the image. That’s a grossly simplified explanation of what these projectors do, but trust me, the more detailed explanation is much, much more complicated and confusing. 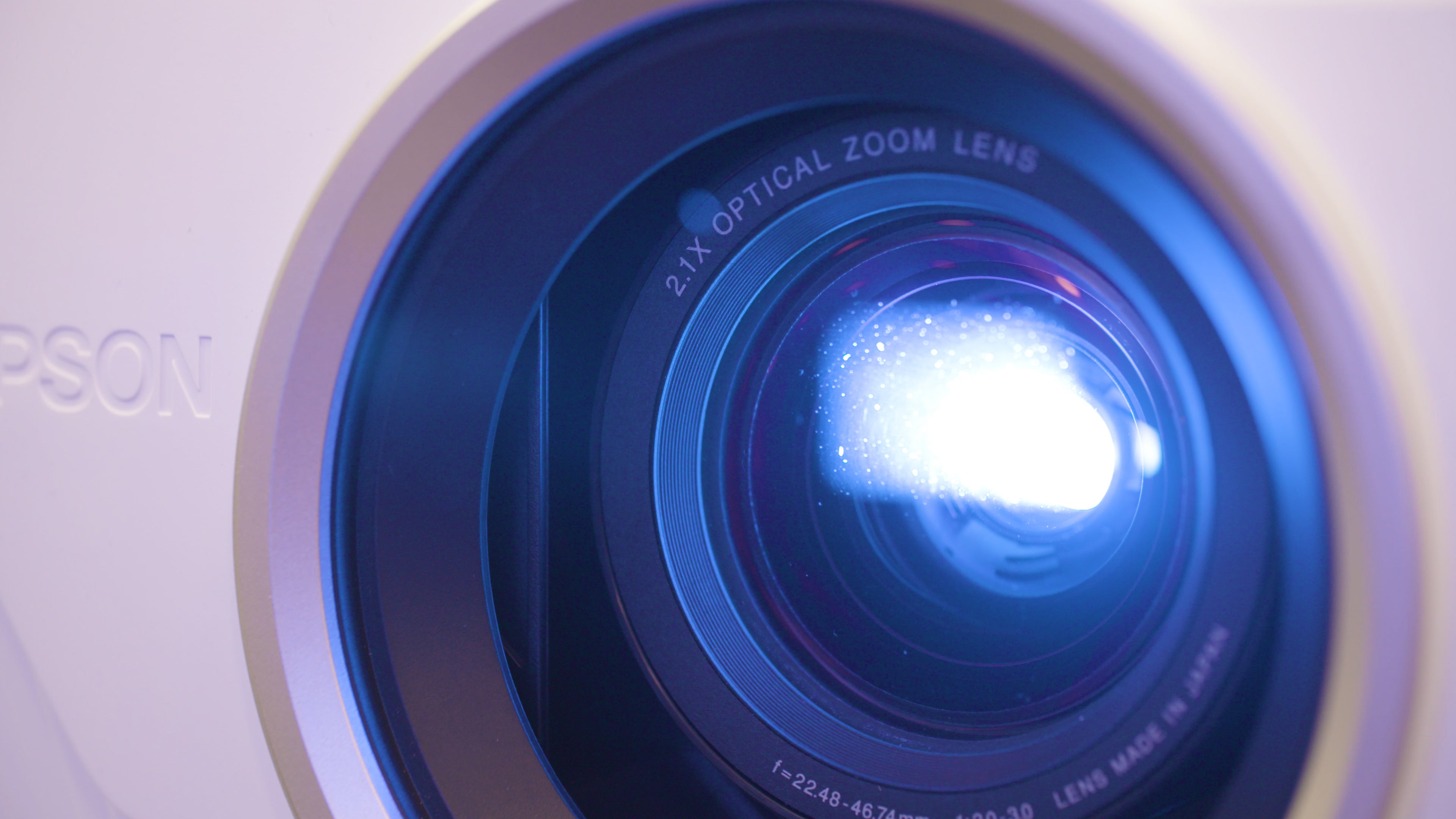 The problem with cheaper projectors is that if you get too cheap, you’re stuck with a muddy and washed out image that is probably going to be too dim. This is why we can’t recommend projectors for under $1,000. In all but the most extreme situations, you’d be better served by a quality television.

But there are five solid options for projectors if you’re in the £1,000 to £2,500 range. That is a lot of money, of course, and if you have space, you’re going to get a better image with a similarly priced TV, On the other hand, no TV you can afford is going to give you 100 beautiful inches of 4K picture.

Which projector is the easiest to set up? 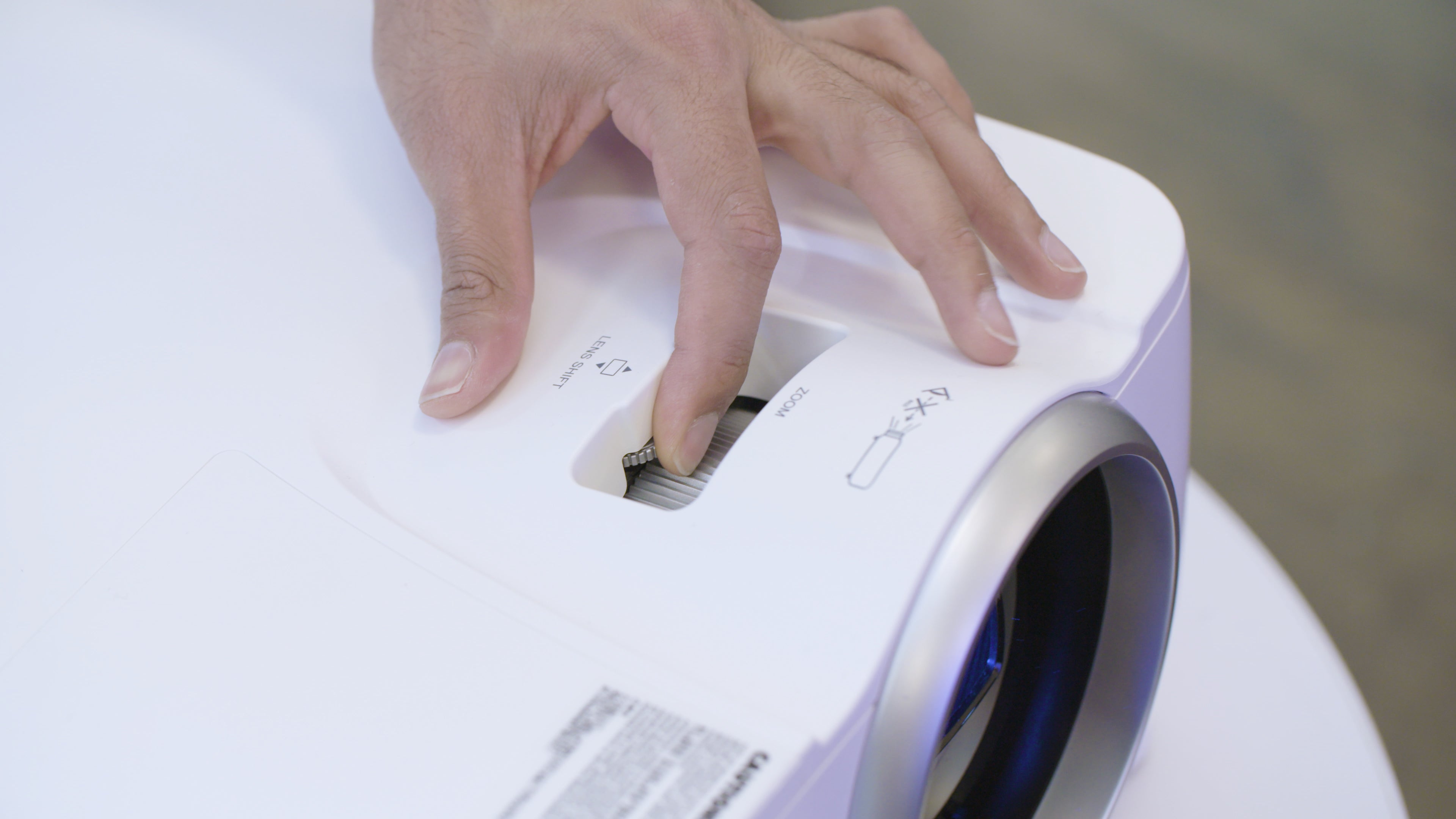 Setting up a projector requires fiddling with a lot of knobs and wheels. (Photo: Raul Marrero/Gizmodo)

What can make projectors really complicated is the setup process. Projectors, more than TVs, are dependent on the lighting in the room—they also need to have the right screen for that lighting. We used the same dark room and an Elite Screens ezCinema Series 2 screen for all five projectors to mitigate variables. Next, we unboxed and set out to create a sharp and even picture on the screen. This requires placing it at an appropriate distance from the screen so that it takes up as much of the screen as possible. Then you have to level the projector, so it’s at the right height, keystone the image so that it’s a perfect rectangle instead of one side being narrower than another, and finally focus the picture so there’s a sharp image on screen.

It comes as no surprise that the two cheapest projectors, the Vivitek and ViewSonic, were also the most barebones. To level them you have to unscrew feet to the right height and to focus the picture, you have to use a poorly labelled knob. The BenQ was moderately better, with its easier-to-read labels, and more intuitive keystone controls. 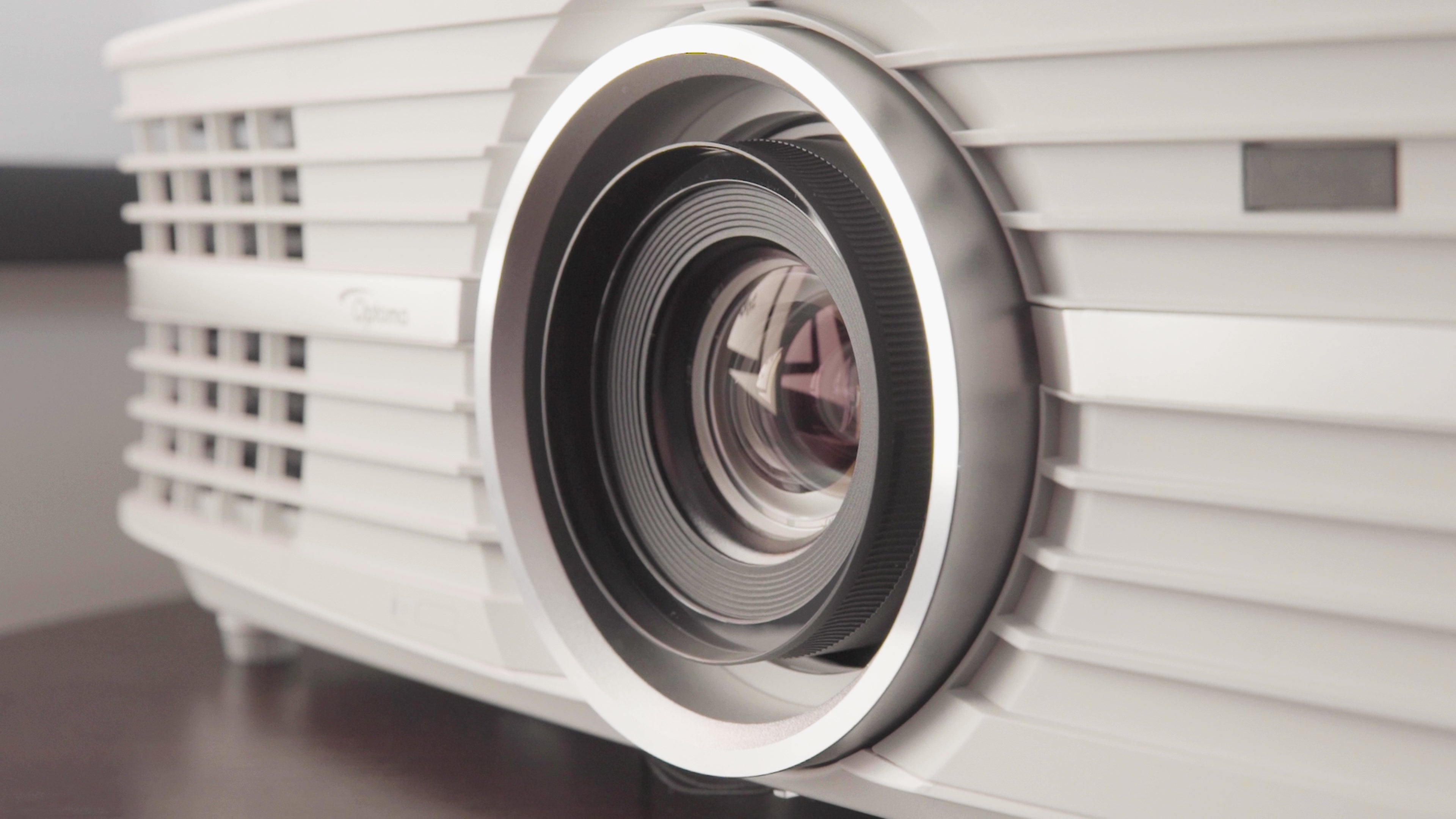 You focus the lens by manipulating a ring much as one would do on a camera. (Photo: Raul Marrero/Gizmodo)

The Optoma was the most fun to adjust, since you have to manipulate the lens as a photographer or cinematographer would—but otherwise, the setup process was as clumsy as the rest.

The Epson TW7400 was the real standout. Unlike all the other contenders here, the Epson can be adjusted with its remote control. Which means you don’t have to hover over the projector and tweak it. Instead, you can place it where you want it to live, sit where you’d normally view content, and make all the adjustments you need with the remote control. 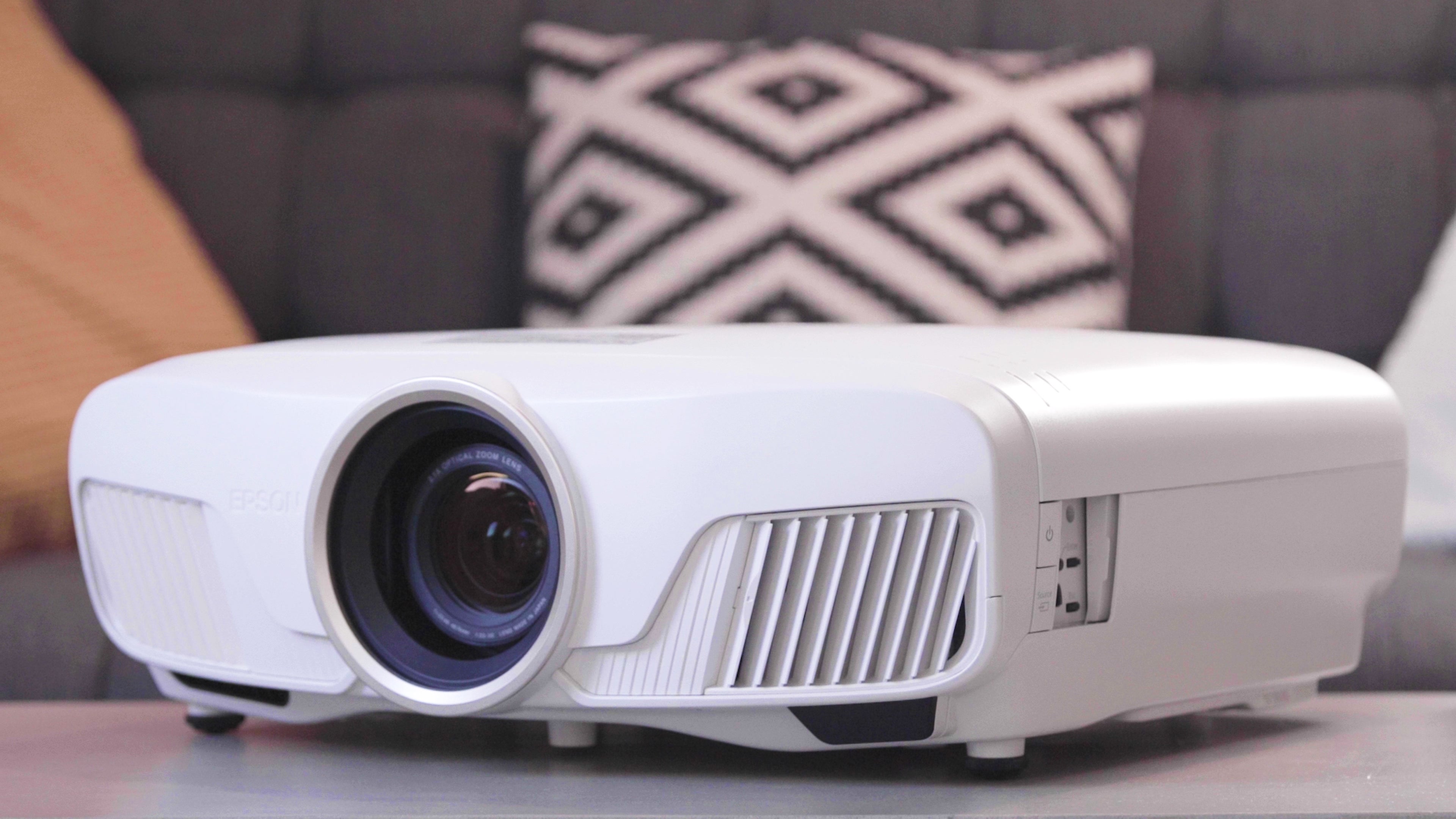 And because it’s electronic you can also store more than one group of settings for adjustments, so if you happen to move the projector from room to room it can be refocused and ready to go with the press of a button.

The other thing to consider when choosing a projector is the quality of the image. Typically reviews like this would calibrate the projector to find out which has the very best possible picture, but a professional calibration costs hundreds of pounds, and between that, a screen, and the projector itself you’re spending a lot of money. So instead we focused on which has the best picture out of the box.

First, we looked for the best picture mode on each projector—typically the cinema or movie mode—and then we used a SpectraCal C6 colorimeter, the Murideo Six-G pattern generator, and the CalMan software to test projector brightness, the quality of the blacks, and colour accuracy. The three products work in tandem. The colorimeter reads light output from sources like OLEDs, LCDs, and the screens projectors display on, providing results on how bright that light is and the exact colour of the light as related to a colour space. It then records that data into the software which provides detailed information about luminescence, hue, and saturation. Luminescence, hue, and saturation all correspond to a z, x, and y-axis. In order to know how far a shade of red has deviated from where it should be on the colour space, you use a pattern generator which provides a clean sample of the exact colour to the projector or TV.

In our testing, we paid particular attention to the luminescence of the colours, because a projector that is too dim will produce darker and less attractive colours. A red might appear more muddy and brown, a bright blue more navy. Colour accuracy is determined by a score called Delta E, or dE. The dE for a colour is determined by taking those coordinates we discussed and pumping them into a formula that compares the actual coordinates to the ideal ones. 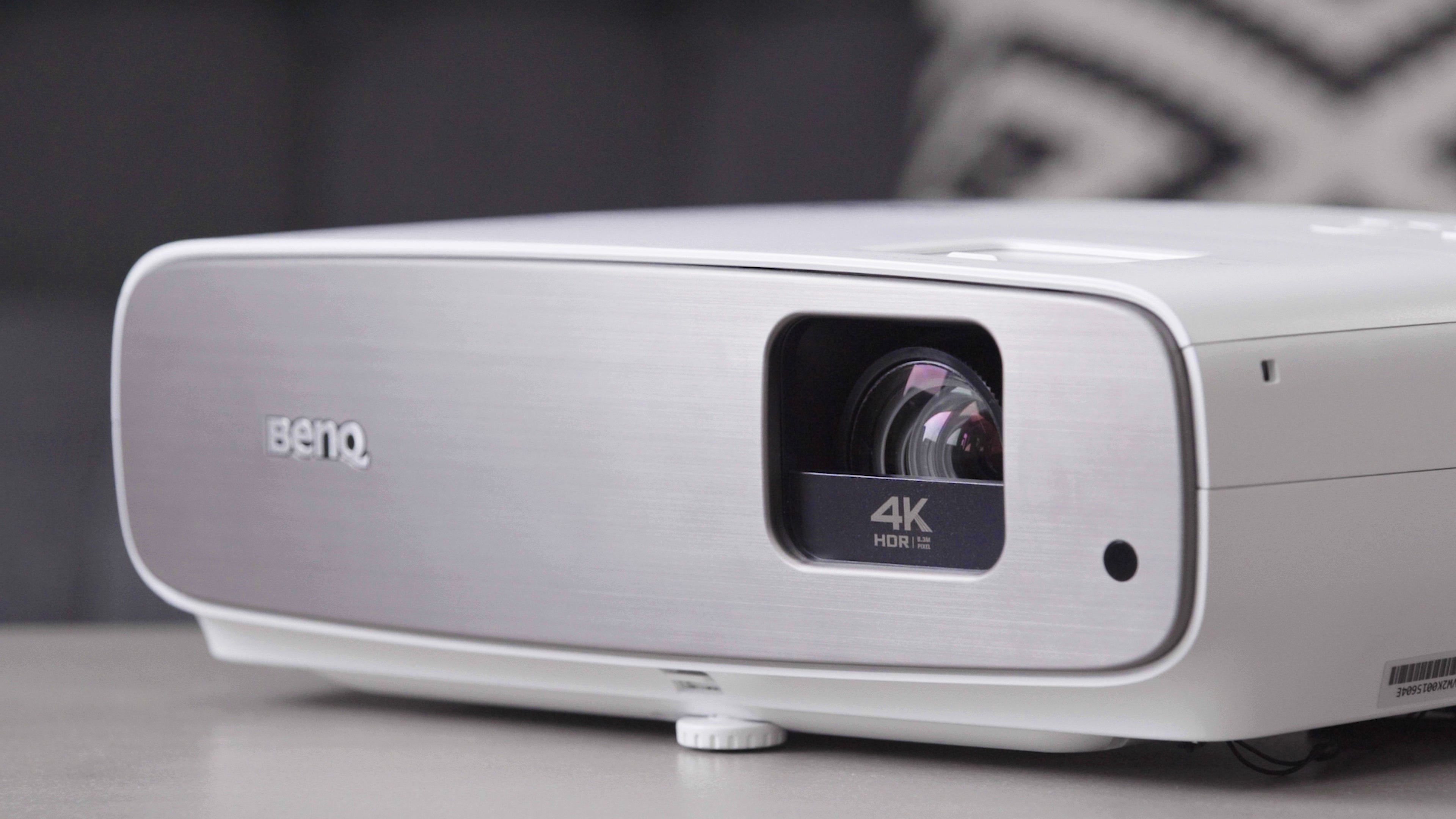 The higher the dE score, the less accurate the colour. Anything above a 5 will typically be visible to the majority of people. Between 3 and 5 most people won’t be able to tell the difference. A score under 3 is apparent only to those trained (think colourists and calibrators). And a score under 1 is usually only visible to Superman or a colorimeter. Out of the box with no calibration, no projector could manage under a 3.

I ran two tests. The first was a saturation sweep which tests the primary and secondary colours at five levels of brightness. The second was a greyscale sweep, testing 20 points of grey from black to white. The BenQ did by far the best with a dE of 4.97 on the saturation sweep and 7.2 on greyscale. The Optoma did 6 and 7.4, the Viewsonic 8.45 and 11.3 and the Vivitek scored 8.03 and 12.1. The Epson TW7400 was a significant outlier with a respectable greyscale dE of 6, but a saturation sweep dE of 17.11. While the hue and saturation were accurate, it was pumping out too much light. It produced a bold image, but it wasn’t as accurate. It would require calibration to get it to an image that is less fatiguing. It also has a distinct blue shift that is unpleasant—like the vibrant mode on a TV.

Consequently, the most accurate was the BenQ. With its welcome balance of colour and brightness, it felt like the better choice.

The Epson is the easiest to set up, but it’s it too bright out of the box. Plus it’s a lot bigger and more obtrusive than the BenQ. The BenQ might have the better picture out of the box, and contain it all in a smaller and more attractive case, but it just cannot compare to the Epson when it comes to ease of set up.

For me, it comes down to price. The BenQ is not only cheaper, but it requires less tinkering for a decent picture, which means you can skip the pricey calibration if you want to save money, and while you can’t adjust it from your couch, it does have fairly easy-to-use controls for setting up and focusing the image.

Which means if you’re looking for a solid projector for well under £2,500, the BenQ W2700 should be your first choice.