With Time Running Out, Hayabusa2 Spacecraft Fails to Drop Target Marker on Asteroid

Japan’s Hayabusa2 probe aborted an attempt to drop a highly reflective target marker on the surface of Ryugu in preparation for its second sample extraction mission. But with surface temperatures rising steadily on the asteroid, the probe is running out of time.

The Japan Aerospace Exploration Agency (JAXA) is in the midst of contemplating a second touchdown mission for Hayabusa2 to collect surface materials. The probe managed to scoop up samples this past February, so the space agency isn’t under a huge amount of pressure to make a second attempt given the risks. That said, the second touchdown would be the icing on what is already a very delicious cake.

Back in April, Hayabusa2 created an artificial crater by shooting a projectile onto the asteroid’s surface. The tiny blast kicked up material from deeper within Ryugu, which JAXA is now hoping to collect for analysis. The next step is for the probe to drop a reflective target marker in the area near the crater to assist with navigation. This operation, dubbed PPTD-TM1, was scheduled for 14 to 16 May, but the mission was unsuccessful. Hayabusa2 failed to drop the marker, returning to its home position some 20 kilometres (12.4 miles) above the asteroid.

This news isn’t great, given that Ryugu will reach its closest orbital position to the Sun in a few weeks, a time when surface temperatures will be way too hot for Hayabusa2 to make a touchdown. 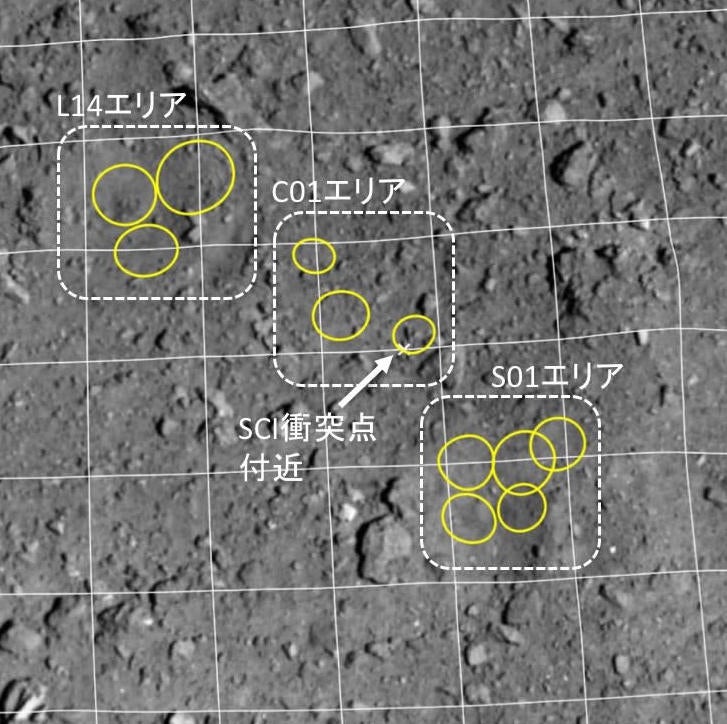 Three candidate areas for the second touchdown attempt, with yellow circles showing specific touchdown points. This image was taken prior to the creation of the artificial crater. (Image: JAXA)

Before the operation, JAXA had designated three candidate areas on the surface from which Hayabusa2 could collect surface materials. A total of 11 candidate points were chosen, as shown by the yellow circles in the image provided by JAXA (above). The circles measure between 15 to 30 centimetres (6 to 12 inches) in diameter. The spots designated S01, C01, and L14 are areas in which debris from the crater has settled. For the PPTD-TM1 operation, JAXA had instructed Hayabusa2 to drop the target marker onto S01.

[PPTD-TM1] The spacecraft descent has been autonomously aborted at an altitude of about 50m. Hayabusa2 is currently rising to the home position. Telemetry from the spacecraft has been confirmed and the spacecraft is normal, but the target marker has not been dropped.

“The spacecraft descent has been autonomously aborted at an altitude of about 50m [164 feet],” JAXA announced in a tweet. “Hayabusa2 is currently rising to the home position. Telemetry from the spacecraft has been confirmed and the spacecraft is normal, but the target marker has not been dropped.”

A subsequent tweet stated that JAXA will investigate to determine the cause of the aborted operation. That said, a similar thing happened back in September 2018. During this early phase in the mission, Hayabusa2’s radar system had difficulty receiving signals from the surface owing to the asteroid’s low reflectivity. JAXA found a fix for the problem, so hopefully it’ll manage to do so again in this case.

But as noted, JAXA hasn’t yet decided to go ahead with the second touchdown attempt. The space agency has to decide if the risks are worth it. The probe could smash into the asteroid or be damaged by debris during the extraction attempt. Indeed, it would be tragic if something catastrophic happened to Hayabusa2 given that it’s already managed to collect surface materials.

That said, JAXA will have to make up its mind soon. As Jason Davis wrote at the Planetary Society, time is quickly running out:

The problem, though, is that Ryugu is approaching perihelion, and its surface temperature will start to climb. Once it tops 100 Celsius [212 degrees Fahrenheit], as soon as early July, the spacecraft won’t be able to spend time in close proximity to Ryugu because all that radiated heat is hard on the spacecraft.

So, if Hayabusa2 is going to collect a second sample, it needs to do so in the next month and a half. The spacecraft will stay at Ryugu until November or December of this year, when it departs for Earth. It will return home with its samples in late 2020.

So some big decisions ahead for JAXA, but the space agency is in a good place. This mission has been nothing short of spectacular so far, and a huge success regardless of what happens next.