A Cool, Gassy Ring Has Been Detected Around Our Galaxy's Gigantic Black Hole

Using the ALMA observatory, scientists have detected a previously undocumented band of cool gas wrapped around the black hole at the core of our galaxy.

The immediate area surrounding the supermassive black hole is kind of intense. Called Sagittarius A*, this behemoth has a mass around 4 million times that of our Sun. As befits a supermassive black hole of that size, it has managed, through its intense gravitational influence, to collect an assortment of cosmological wonders, including wayward stars, troves of interstellar dust, and various gases.

Much of the gas collected by Sagittarius A* orbits the black hole in an accretion disk. This doughnut-like ring extends from the black hole’s event horizon to a few tenths of a light-year away. Astronomers had previously detected a blazingly hot band of gas within this accretion disk, which—weirdly—didn’t show any signs of rotation around the black hole. New research published yesterday in Nature now describes a disk of cool interstellar gas, along with evidence of movement within the accretion disk.

“We were the first to image this elusive disk and study its rotation,” Elena Murchikova, the lead author of the new paper and an astrophysicist at the Institute for Advanced Study in Princeton, said in a release from the National Radio Astronomy Observatory.

As noted, astronomers had previously captured evidence of the hot portion of the gaseous ring. And by hot, we’re not kidding. Its temperature is around 10 million degrees Celsius (18 million degrees Fahrenheit), which is two-thirds the temperature found at the core of the Sun. When gas gets this hot, it emits X-ray light that can be detected from Earth. Astronomers had also previously detected cooler gas near the black hole, but nowhere near the accretion disk.

To be clear, the “cooler gas” is just cool by comparison; it’s still around 10,000 degrees Celsius, or 18,000 degrees Fahrenheit. The relationship, if any, between this cool gas and the hot gas within the nebulous disk is not known.

But as the new research shows, cooler gas also exists in close proximity to the supermassive black hole. Using the ALMA telescope in Chile’s Atacama desert, the astronomers detected the faint millimetre-wavelength signals emanating from a cool ring of gas. These signals—the result of radiation on hydrogen atoms—travelled 26,000 light-years to Earth with barely any degradation along the way. The result is the first-ever image of the cooler gas disk. Incredibly, it’s located one hundredth of a light-year away from Sagittarius A* and is roughly 20,000 times the diameter of the black hole. 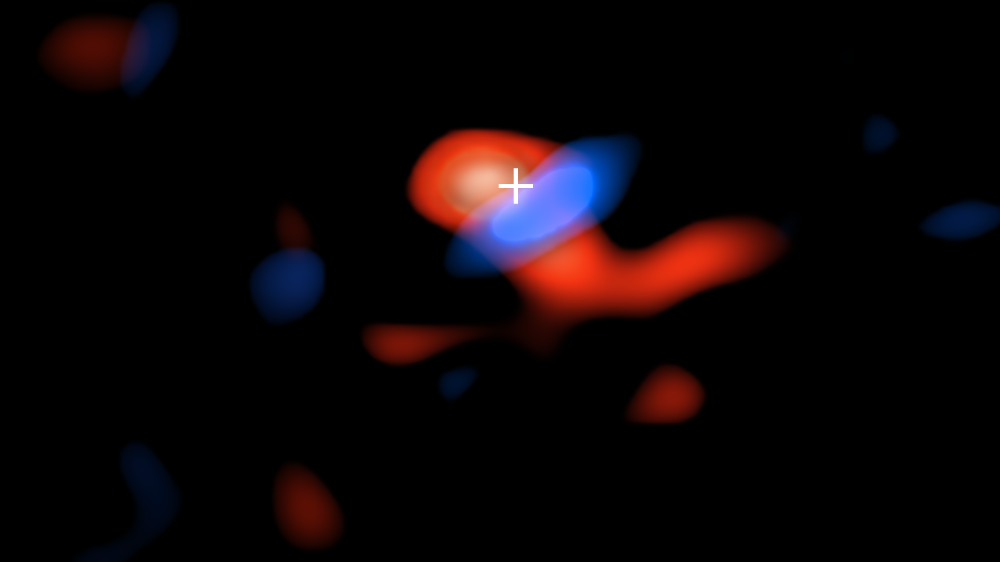 ALMA image of the cool gas within the accretion disk. Areas in blue are moving toward us, while the regions in red are moving away—evidence that the accretion disk is spinning around the black hole, which is shown by the crosshair. (Image: ALMA (ESO/NAOJ/NRAO); E.M. Murchikova; NRAO/AUI/NSF, S. Dagnello)

The ALMA data also allowed Murchikova and her colleagues to track the location and motion of the gas within the accretion disk. Owing to the radio light doppler effect, which produces shifts of blue (moving toward us) and red (moving away from us), the astronomers were able to see that the gas was slowly rotating around the black hole. The amount of hydrogen within the cool area of the disk was estimated at around one-tenth the total mass of Jupiter.

Importantly, these observations provide new insights into how the supermassive black hole at the centre of the Milky Way collects and devours surrounding matter. In the new study, the researchers estimate that Sagittarius A* gobbles up a relatively tiny amount of matter—less than half a percent of the mass of the Moon per year.

These new observations are exciting, but Murchikova said “we still have no good understanding of how” the accretion process actually works at Sagittarius A*. A deeper dive into the new ALMA data, plus observations by other observatories, will hopefully reveal more about the monster parked at the core of our galaxy.