Scientists have spotted what might be the most distant (and therefore the youngest) example of merging galaxies yet observed, according to new results.

The team of researchers in Japan observed a distant source of light called B14-65666 using the Atacama Large Millimetre/submillimetre Array of telescopes in Chile. Higher-resolution data from light emitted by oxygen and carbon ions suggested to the researchers that the object might be a single galaxy quickly forming new stars as the result of a collision.

Thanks to the fact that light has a top speed, looking farther into the distance reveals information about increasingly earlier times. Scientists therefore hope to retell the history of the universe, how it evolved and ended up looking the way it does today, by observing the most distant objects.

Scientists were already familiar with B14-65666, an object we see as it was 13 billion years ago. Data from the Hubble Space Telescope revealed that it seemed to have two lobes, separated by about 6,500 to 13,000 light-years—the Milky Way, our home galaxy, has a diameter of more than 100,000 light-years, for comparison. So a team led by Takuya Hashimoto, a postdoctoral researcher at the Japan Society for the Promotion of Science and Waseda University, took a closer look at the object using ALMA, on nights in 2016, 2017, and 2018.

Specifically, the researchers observed radiation emitted by specific carbon and oxygen ions as well as radiation from dust. They confirmed that the object was indeed organised into two clumps and estimated the object’s total mass at around 770 million times the mass of the Sun (that’s many times less massive than our own Milky Way). They also predicted that it was forming approximately 200 solar masses’ worth of stars each year. 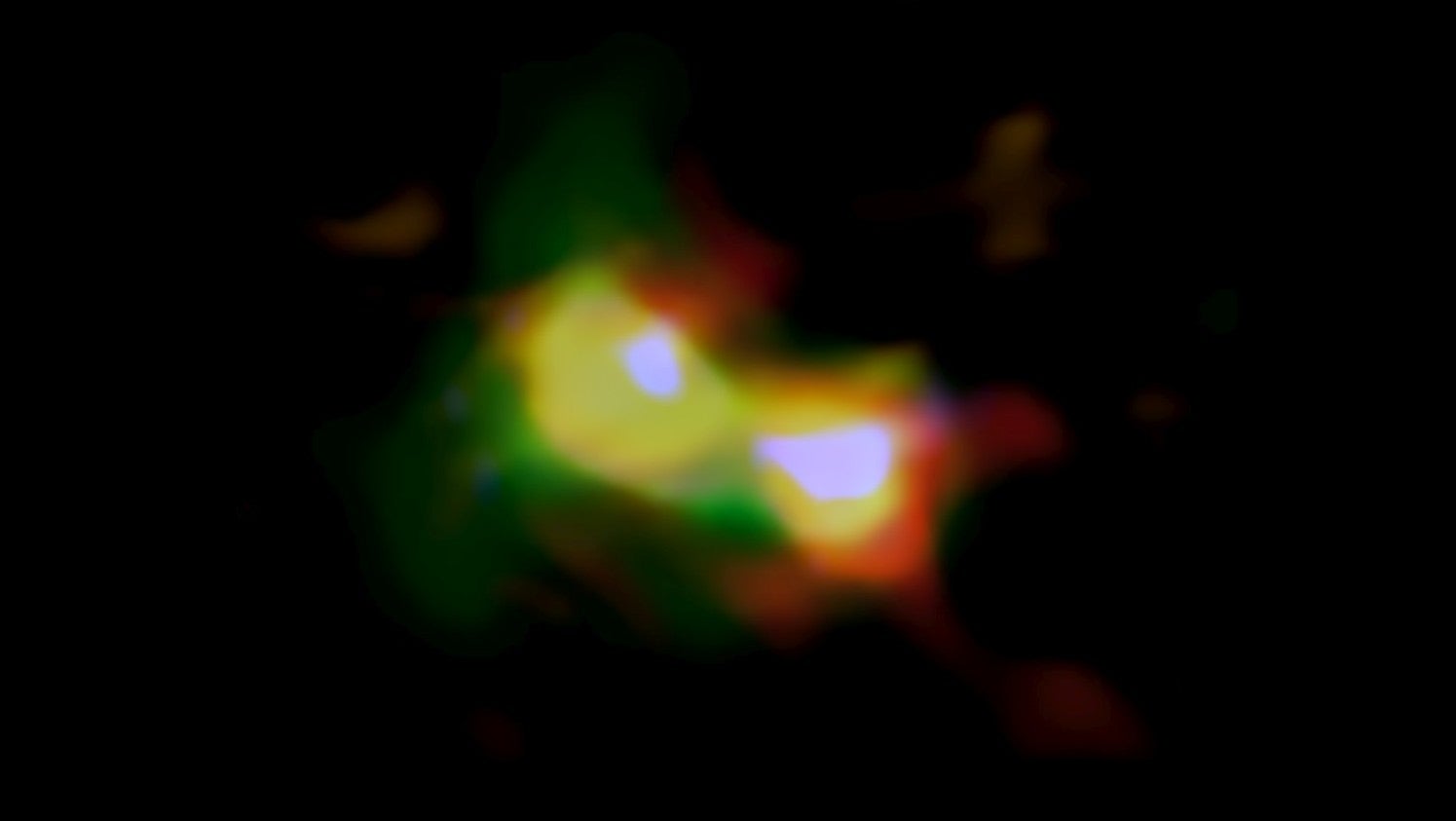 The researchers inferred that the object must be the result of two smaller galaxies merging, experiencing a starburst—a quick period of star formation—as a result.

The galaxy is interesting for more than just how old it is, though. The fact that the researchers were able to detect the signal from dust as well as the specific oxygen and carbon spectral lines means that it could be a promising target for followup research with new telescopes. The researchers will attempt to view spectral lines representing other elements as well, to get an idea of the kind of matter making up the very early galaxy.

But it’s not the only early example of merging galaxies, and there’s evidence for some even more distant ones as well. “The very early universe seems like a very exciting time to be a galaxy, with lots of violent collision and nothing that looks like the ordered structures we’re used to at later times,” Dan Marrone, associate professor at the University of Arizona, told Gizmodo.

He pointed specifically to oxygen as a useful source of spectral lines for these distant objects, mentioning that there are a lot of measurements of these oxygen ions for this epoch. “There should be many exciting things happening in this space, even before [the James Webb Space Telescope].”

Scientists think that mergers are an important part of galaxy formation. Seeing galaxies merge that far away, and so far back in time, adds some credibility to that theory.