A discarded Apollo 10 lunar module known as “Snoopy” has been drifting in space for the past 50 years, its location a complete mystery. Now, after a meticulous eight-year search, a team of astronomers suspect they’ve finally found it.

On 22 May 1969, just two months before Neil Armstrong and Buzz Aldrin made their famous walk, NASA’s Apollo 10 mission performed an important preparatory exercise some 47,400 feet above the Moon.

During this dress rehearsal for the Moon landing, astronauts Thomas Stafford and Eugene Cernan spent some time in a lunar module, nicknamed Snoopy, as fellow astronaut John Young waited in the command module, appropriately dubbed Charlie Brown. The lunar module got its name because it was going to “snoop” around the future lunar landing site. 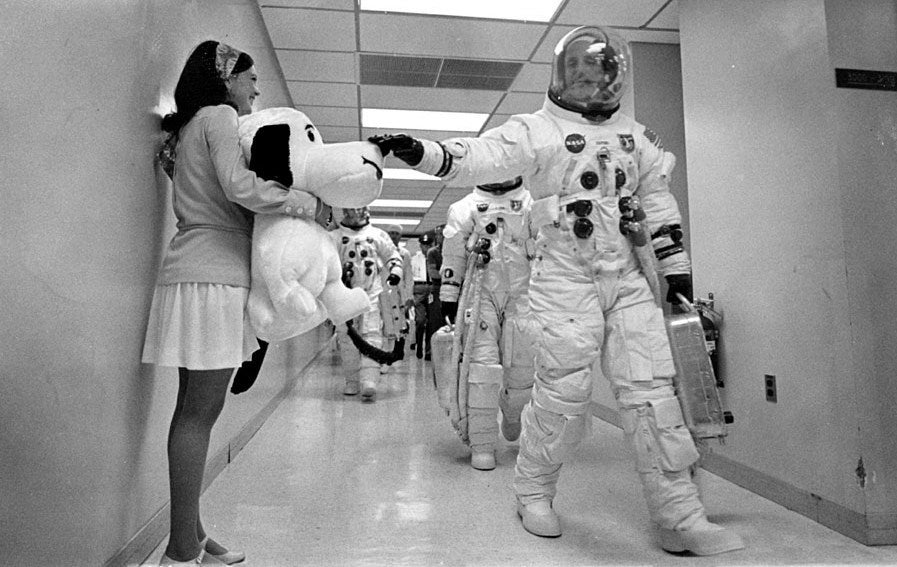 After the docking manoeuvre, the astronauts re-joined Young in the command module and headed back to Earth, but Snoopy never made it home, or to the lunar surface for that matter. Instead, the lunar lander was flung into an orbit around the Sun, never to be heard of again—until now. Possibly.

As reported in Sky News, a team of astronomers say they’re “98% certain” they’ve located Snoopy’s position in space. The news was disclosed by Nick Howes, a fellow of the Royal Astronomical Society, to an audience attending the recent Cheltenham Science Festival.

Howes began the search for Snoopy back in 2011. Over the past eight years, his team has sifted through radar data gathered by multiple observatories. Howes told Gizmodo in a Twitter direct message that his team “trawled through lots of data” with help from Asteroid Zoo members. Back in 2015, the team thought they had detected Snoopy, but object Wt1190f, as it was called, re-entered Earth’s atmosphere, at which time it was identified as the trans-lunar injection stage of the 1998 Lunar Prospector mission.

The object-in-question was finally picked up by the Mount Lemmon Sky Survey team in January 2018. It “quickly became obvious that the size and orbit were very much like the calculations we made in 2011 and 2012 for Snoopy,” Howes told Gizmodo. To make the discovery, Howes said his team used online orbital calculators such as AGI’s Systems Tool Kit (STK) to determine the object’s orbit.

Speaking to Sky News, Howes said “we can’t be 100% sure” this object is Snoopy. For that, we’ll need to get “really close to it and get a detailed radar profile.” As to when that might happen, Howe told Gizmodo that it won’t be any time soon.

“Right now [it’s] heading away from us” and it’s “due to come back around 18 years from now,” he said. The object is currently at magnitude 29.5 in terms of its brightness, which means it’s impossible to image with most telescopes, he added.

Should the object eventually be confirmed as Snoopy, Howes said we should try to intercept and image it. He thought SpaceX CEO Elon Musk might be a good candidate for such a mission. As to whether we should scoop up Snoopy, “that’s an interesting question,” he said, “as the cost would be high versus the science return,” adding that “it’s a similar argument I guess to the one Bob Ballard faced in the 80s when looking for the Titanic.”

Howes is right to say it’s an “interesting question” as to whether we should retrieve Snoopy, if that’s what the object really is. But to be fair, this historical relic is doing nothing for nobody out there in the depths of space. My preference is that we go get it and put it in a museum for all to see. It would be an expensive proposition, no doubt, but also pretty cool.