DJI's Robomaster S1 Is the Closest Thing to RC Mario Kart, and It's a Blast

DJI is already the worldwide leader for drones, and despite recently taking aim at GoPro with new Osmo Action, it’s venturing into yet another market with the new Robomaster S1. While this might seem like a move out of left field, DJI’s robotics efforts are actually quite well established in Asia thanks to its annual Robomaster competition, and with the S1, DJI is looking to bring the same sort of passion and creativity for coding and robotics to the consumer space.

Starting at $500 (£399; UK pricing and availability TBA), the Robomaster S1, which is on sale now in the US, is one part coding lesson, one part robot assembly class, and one part Mario Kart, and it’s an absolute blast. You see, because unlike a cheap RC car you might buy at Argos, the Robomaster comes completely disassembled, which means you’ll need to piece together its 46 various parts before you can take it for a spin. 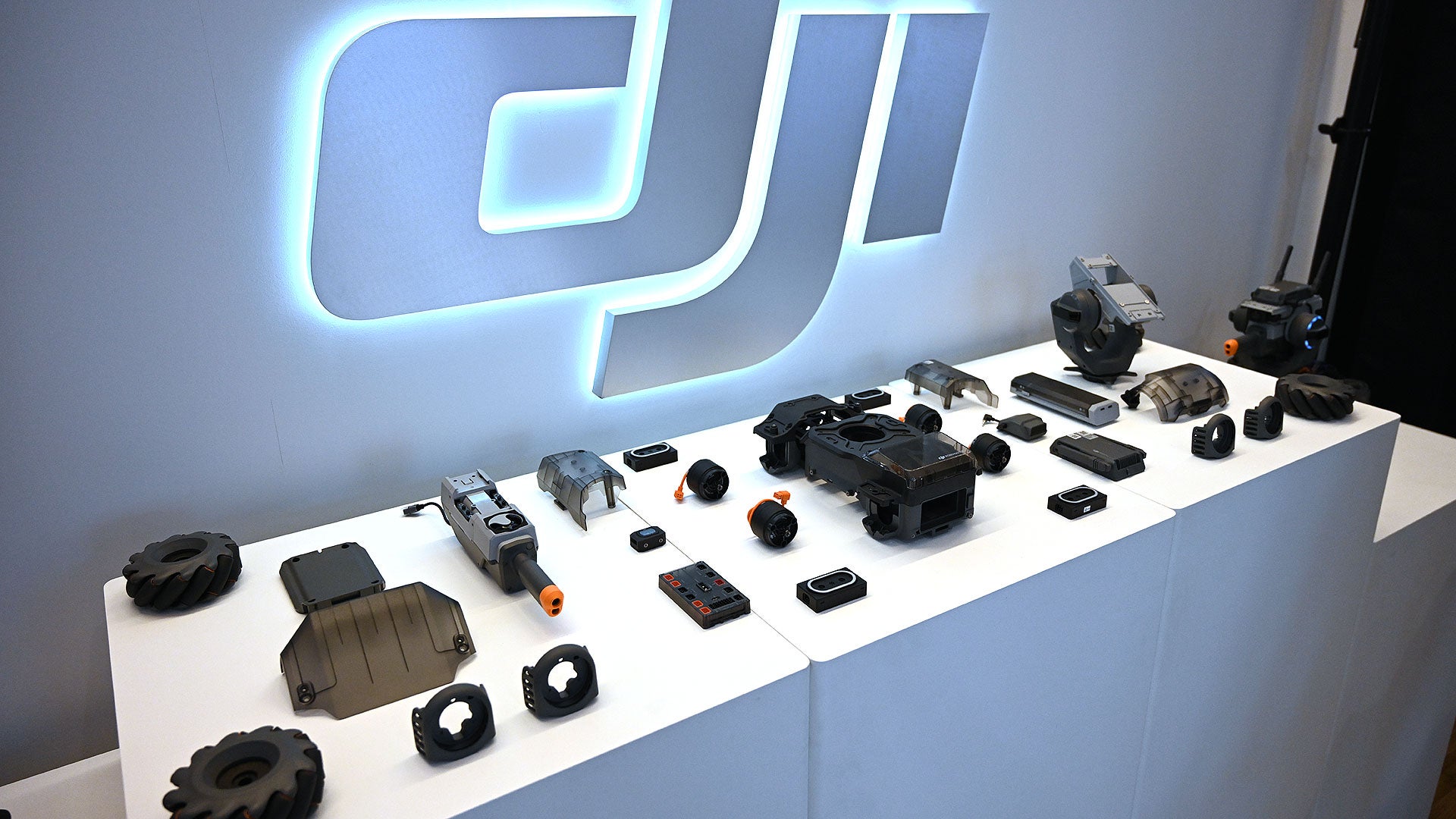 Here are all of the Robomaster S1's 46 different parts. Assembly is definitely required. (Photo: Sam Rutherford/Gizmodo)

Once you assemble the Robomaster S1 (S1 stands for "Step 1"), you can hop behind the vehicle’s controls using the Robomaster app, which is split into a three sections: Solo, Battle, and Lab. Solo mode lets you drive the S1 around like a sophisticated RC car, while Battle gives you a couple of different game types to duke it out it against other S1s.

But if you really want to take advantage of the S1's full potential and educational value, the Lab is where it’s at. The S1 is nearly fully customisable and be programmed to do your bidding in Scratch—a kid-friendly programming language with code blocks that can be pieced together like Legos— or Python, for more advanced coders. The Robomaster S1 also comes with 36 different sensors, a rechargable battery, and a custom circuit board with six pulse width modulation ports that can accept input from outside parts, so if there’s a component you want to add to the S1 like an accelerometer or second camera, you can bolt it on and then code in support for that component yourself. 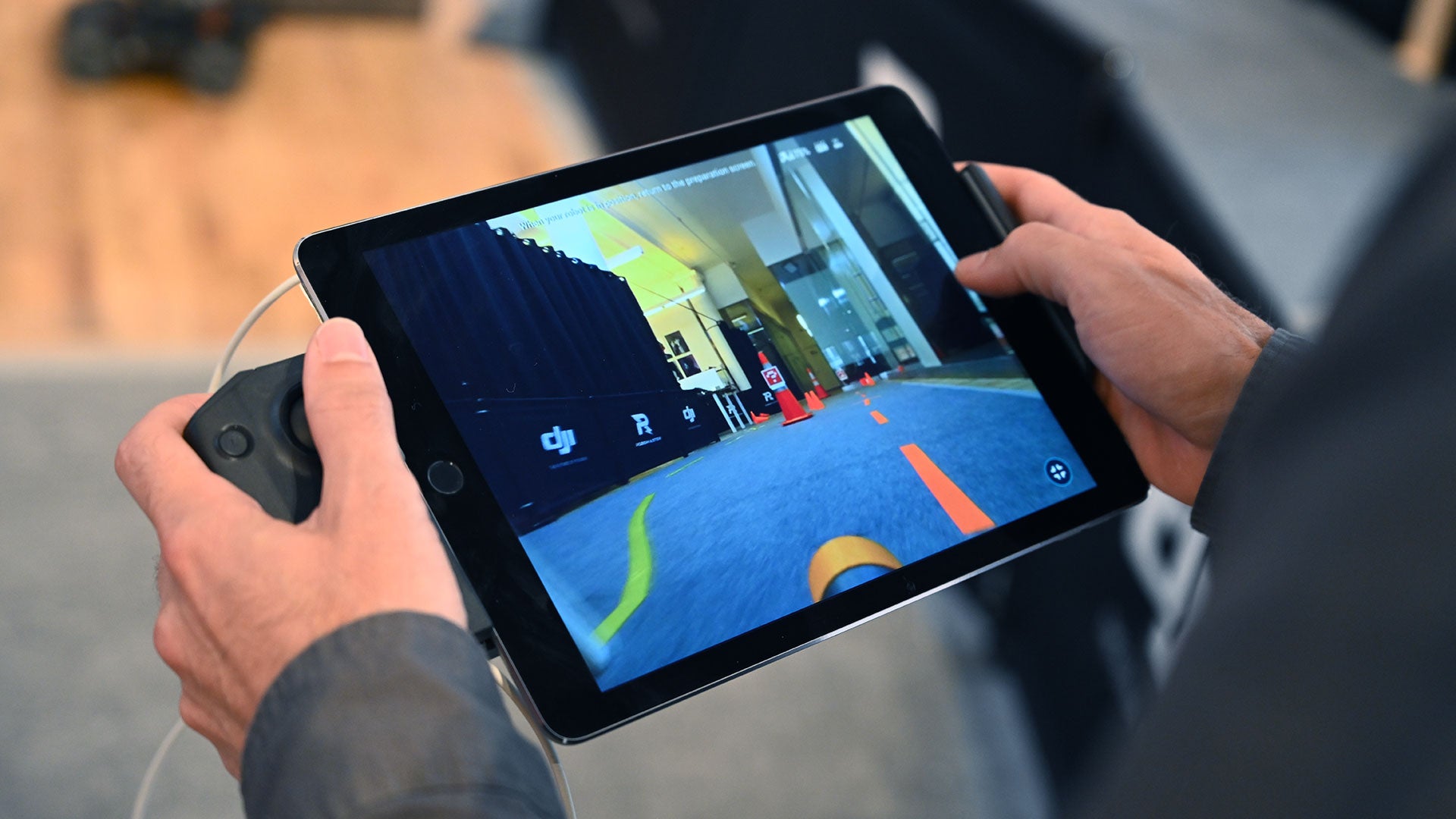 Using the Robomaster S1's camera to drive is much easier than trying to navigate from a top-down perspective. (Photo: Sam Rutherford/Gizmodo)

But let’s not digress: The S1's real fun is just driving it around. Because it features Mecanum wheels instead of traditional tyres, the S1 is incredibly agile and can even strafe directly left or right. Meanwhile, the S1's turret holds its built-in first-person camera and two different blasters.

One blaster is infrared and can be used gun down other S1s by hitting the illuminated sensors scattered around its chassis. If you want to shoot something a bit more tangible, the S1 also comes with a gel bead blaster that fires what are essentially a generic version of Orbeez. That said, even when you’re having a gel bead blaster fight, the S1 still relies on its infrared blaster for hit detection.

At a preview event hosted by DJI, I got a chance to battle and race against a pack of other reporters manning their own S1, and it was absolute mayhem in the best sense of the word. In DJI’s free-for-all battle mode, we darted around a smallish 15 x 15-foot arena while pelting each other’s bots with hundreds of pellets.

Here’s a shot of DJI’s app for the Robomaster. (Photo: Sam Rutherford/Gizmodo)

This is what coding in Scratch looks like. Individual code blocks can be dragged and dropped where needed, which avoids needing to know specific coding syntax and makes it easier for children to pick up coding. (Photo: Sam Rutherford/Gizmodo)

Here is the same snippet of code in Python, which can be used to program the S1 by more advanced coders. (Photo: Sam Rutherford/Gizmodo)

The beads make a bit of a mess, but can be easily vacuumed up when you’re done goofing around.

Each light surrounds an infrared sensor which can detects shots from other S1s during battle. (Photo: Sam Rutherford/Gizmodo)

The question mark at the bottom is one of a few different signs that can be used while racing or battling to give the S1 a power-up. And if you don’t like the speed boost or other power-ups DJI created, you can edit the code and create your own.

Meanwhile, to make S1's programmability more immersive, DJI also includes a set of signs featuring numbers and icons that work similarly to QR codes. Numbers can be used to set checkpoints during races and scanned in by pointing the S1's first-person camera at the signs, while things like the Heart icon and the “?” icon can be scanned in to provide power-ups like a speed boost or EMP blast.

So between the S1's built-in blaster, various power-ups scattered around the battlefield, and heart icons that let you revive your S1 when you run out of HP, I was basically playing a real-life version of RC Mario Kart. The only thing we didn’t have was a sadistic AI Luigi throwing out shells and mean stares as he drives by. 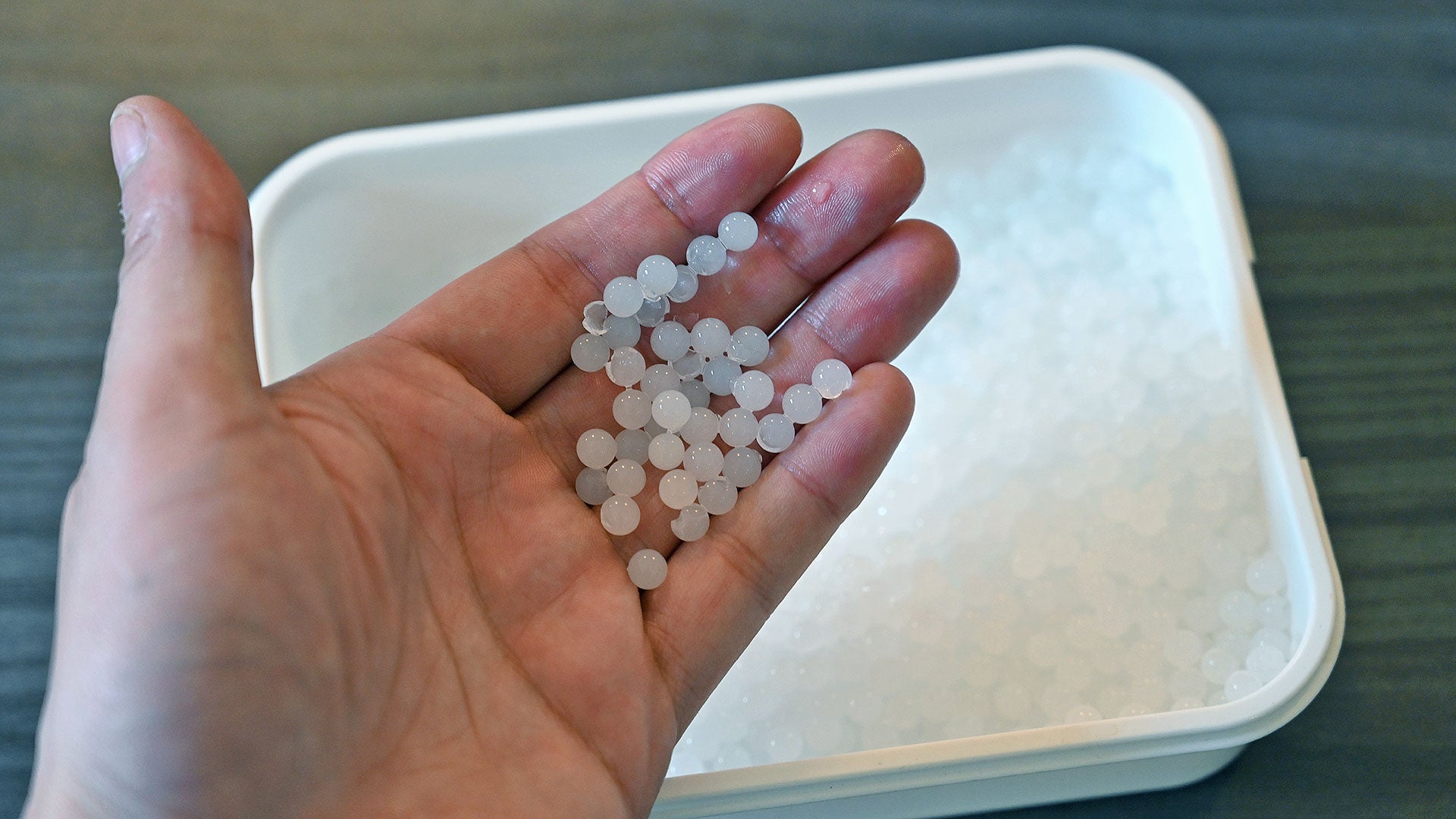 These are the gel beads the S1 uses as ammo. They start as tiny beads and need to be soaked in water so that they can expand to their full size before use. (Photo: Sam Rutherford/Gizmodo)

Next, we moved on to a custom race track with a series of four checkpoints spaced throughout the lap. For anyone who has played a modern FPS game, the S1's driving controls will feel instantly familiar. Using a phone or tablet, you can use the on-screen touchpad on the left of the app to move the S1 in any direction, while the touchpad on the right is used to aim the camera, which you need to do to navigate, and also scan in checkpoints and power-ups.

The S1 can also use its sensors to do things like follow lines drawn onto a track, and comes with variety of sound and image recognition software that allows it to identify 44 different Vision markers (things like road signs and arrows), gestures, clapping sounds, and even other S1 bots. DJI even borrowed some tech from its drones and gave the S1 the ability to follow a specific person within its line of sight.

Additionally, if you prefer physical controls instead of software buttons, the Robomaster S1 also supports an optional controller similar to what DJI makes for its drones, which includes a clip to hold a mobile device along with an analogue control stick and several shoulder buttons and triggers. 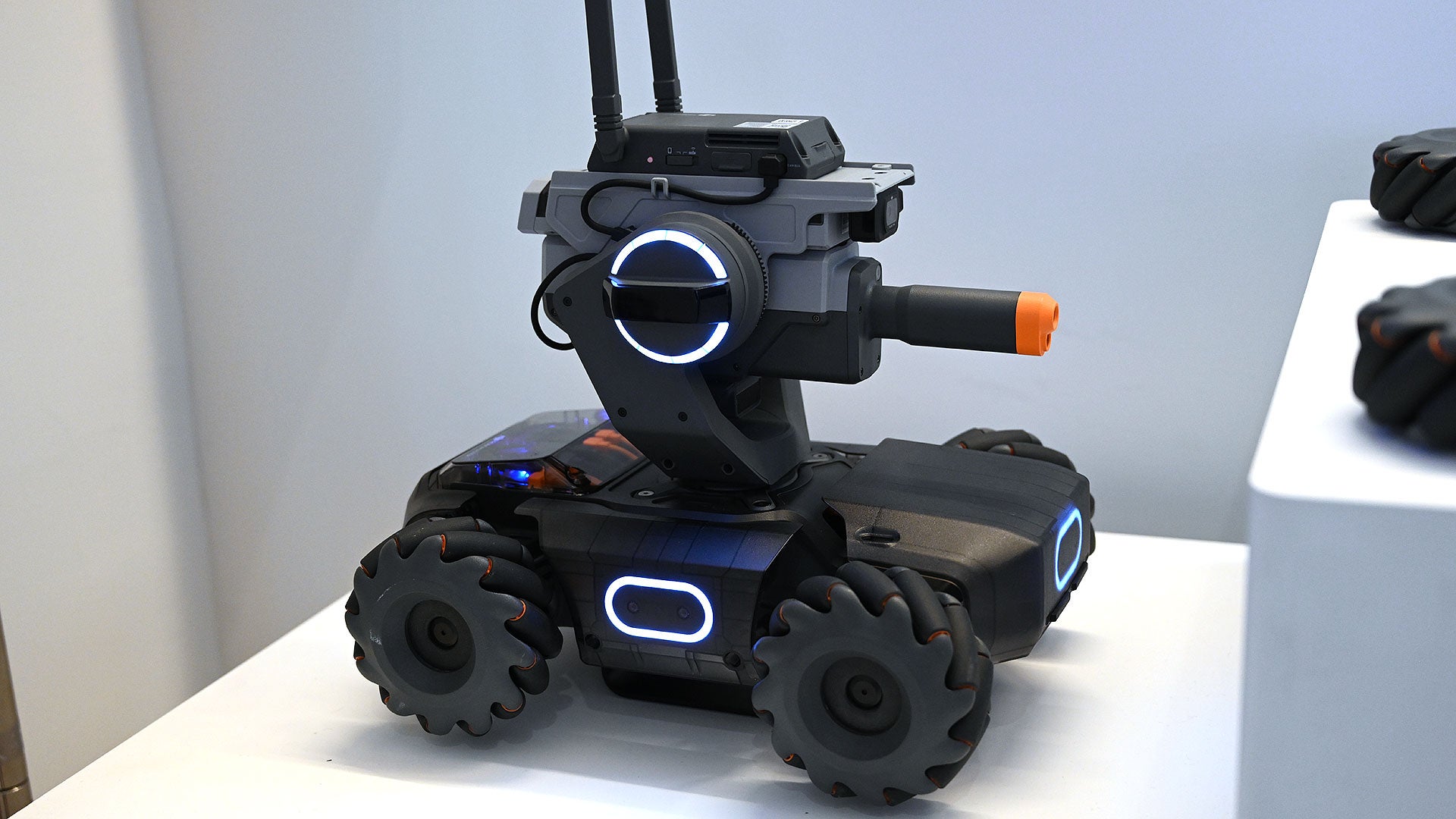 Look, I know $500 is a lot to spend on an RC car, but if you or your kid can take advantage of its programmability to learn to code, the Robomaster S1 starts to make a lot more sense. That said, as innovative as the S1 looks and feels, it’s really just part of a bigger trend of high-tech robotic toys like the GJS Geio Gaming Robot, and others with an educational angle like Sphero’s RVR, which at $250 (£199), almost seems like a entry-level option compared to the more sophisticated Robomaster S1.

Unfortunately, due to time constraints, I didn’t have the chance to build one from scratch myself, but once I get my hands on an S1 for keeps I’m looking forward to doing that real soon.