Young people take the blame for a lot of the world’s problems. Ignoring the fact that wages have been stagnant for the last 40 years, we’re often blamed for killing the economy because we’re not buying as many houses or diamonds, having less babies, and waiting longer to move out of our parents’ homes.

But according to FujiFilm, at least we’re helping to keep old-school film photography alive, who recently resumed production of monochrome film after a one-year hiatus due to consumer demand “particularly from millennials and GenZs.”

So, to make it a bit easier to find black-and-white film, FujiFilm is bringing back its Acros line with its new Neopan 100 Acros II film, which will be available in both 35mm and 120mm formats at ISO 100. FujiFilm says its new film features proprietary Super Fine-Σ technology that results in “unsurpassed fine grain, sharpness and exceptional three-dimensional gradation” compared to original Acros film. 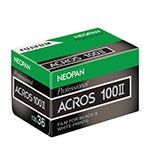 Here’s what the box for the new Neopan 100 film will look like. (Photo: FujiFilm)

For a company with the word film in its name, it seems like a no-brainer to support the small number of photographers who still want to deal with the hassle of analogue film. And with some outlets claiming that we’re in the midst of a film photography revival, it’s encouraging to see a company with such a long history in analogue photography like FujiFilm come back to the scene.

However, part of FujiFilm’s return is due in part to the development of new materials used to make film, which the company said had become more difficult to source recently due to the decline of film and the rise of digital photography.

In a way, the resurgence of film photography mirrors the rise of vinyl sales, which have grown every year since 2006. Though if you look back at vinyl sales from the 1970s, it’s easy to see that while vinyl is on an uptick, it’s still a minor blip compared to vinyl sales back in the day.

Unfortunately, FujiFilm has yet to reveal pricing for its new Neopan 100 Acros II film. And when it launches later this autumn, Neopan 100 will only be available in Japan while FujiFilm evaluates market demand before trying to sell its film in other regions.

But with Kodak having brought back Ektachrome film in 2018 and FujiFilm reviving its Acros film in 2019, even though analogue photography might be on life support, it’s not dead just yet.