The HP Spectre x360 15-inch laptop is a lovely machine. Impeccably designed, powerful enough for most big tasks, and featuring a new 15.6-inch OLED display that will make your eyes weep with joy. Too bad HP put a terrible trackpad on the thing.

What is it?: HP's latest premium 15-inch notebook, now with an OLED display
Price: £1,600
Like: The OLED display is tremendous. The mx150 is just fast enough for most needs. Keyboard is nice.
Don't Like: That trackpad should be pilloried.

While HP launched the laptop earlier this spring, the device I have been testing packs the previously unavailable 15.6-inch OLED display. It’s one of the most beautiful displays you’re going to find on a laptop right now. HP isn’t the only manufacturer using this particular panel, though. Alienware, Lenovo, and plenty of other brands are using the same 4K OLED display in variants of their most popular 15-inch laptops.

Upgrading from the typical 4K display to the OLED one will cost you, but it's worth it. You'll get some of the richest looking colours in a laptop display right now, along with the darkest blacks possible.

As before, the Dell XPS is probably the best rival to consider to the HP Spectre x360 15. Though Dell hasn’t updated its processors since last year, nor does it offer an OLED option. If you want a 15-inch 2-in-1 with an OLED display, you’ll have to go HP for now. The OLED version of the device is the priciest, starting at £1,600 and going up to £1,900. As reviewed, this Spectre x360 15 has an i7-8565U, Nvidia MX150 GPU, 16GB of RAM, and a 256GB SSD - however, this specific configuration is only available in the US. A similarly configured model is available in the UK for £1,600, which also features an 8th-generation Intel i7 processor and a Nvidia MX150 GPU, but has 8GB of RAM and a 512GB SSD.

HP opted for an interesting location for the Thunderbolt 3 port. (Photo: Alex Cranz/Gizmodo)

HP isn’t the only company doing a hardware switch for disconnecting the webcam, but it's still a welcomed feature. (Photo: Alex Cranz/Gizmodo)

The other side includes a microSD slot. (Photo: Alex Cranz/Gizmodo)

The combination of the i7 8th-gen processor and Nvidia MX150 discrete GPU is curious. This won’t win any speed competitions. It’s faster than similarly configured 13-inch devices because it can sustain faster speeds longer thanks to being larger and better at cooling the CPU and GPU, but it is not the fastest 15-inch laptop available (that would be a gaming or workstation laptop). It’s perfectly average to slightly above average in the performance department. Need to edit a few videos, or play a game on medium to lower settings? The Spectre x360 15 will be there for you. Need to edit a batch of 4K video files in real time or render a huge 3D project in Blender? This might not be the right tool for the job.

It’s got more style than other premium 15-inch laptops like the Dell XPS or Apple MacBook Pro. The edges closest to the hinges have been chopped off with a power button added on one side and a Thunderbolt 3 port added on the other. They’re distinctly weird locations for two regularly used features. You finger naturally searches for the power button on the side of the device, and you never think of a port hiding in the corner of the laptop. Yet, I never accidentally hit the power button when trying to plug something in because it’s far enough away from all the other ports. I even found myself not hating the Thunderbolt 3 location, although it won’t work with any Thunderbolt 3 docks or dongles that are meant to rest flush against a laptop. 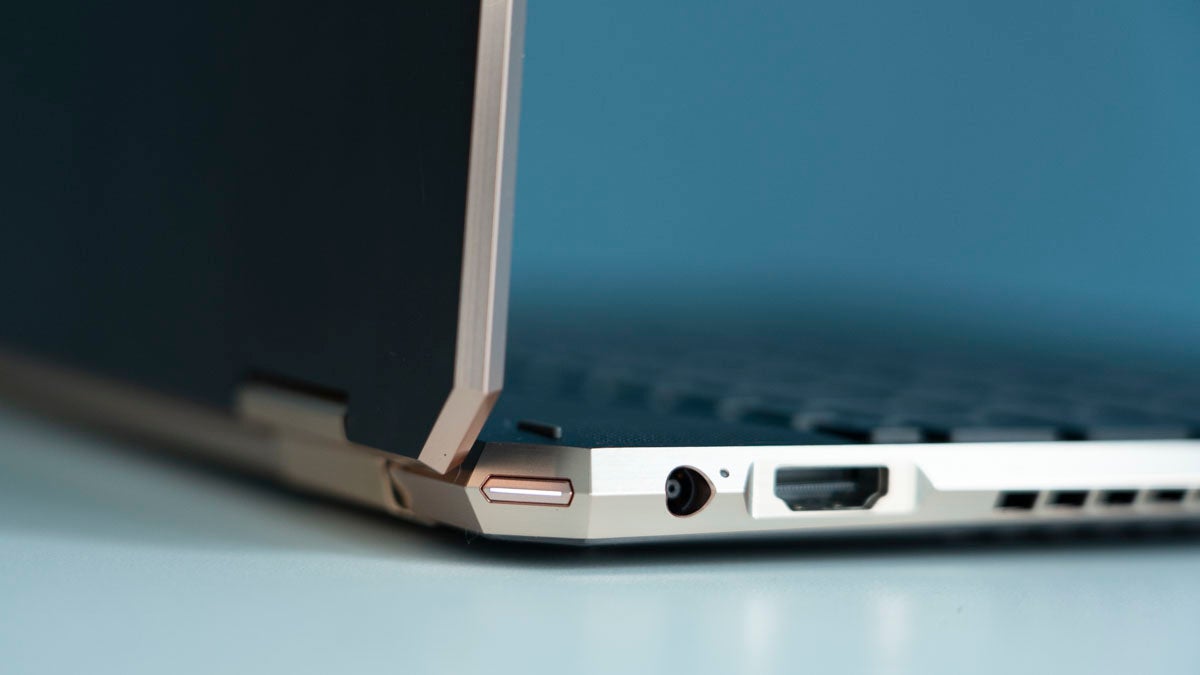 I ended up loving the location of the power button, appreciating the full-size HDMI port, and generally holding contempt for the proprietary power port. (Photo: Alex Cranz/Gizmodo)

Also, in a welcome change of pace, HP included a hardware switch for the webcam that physically disconnects it from the motherboard internally. Flick it off, and the OS no longer even sees a webcam attached. HP told me it is physically closing off circuits between the webcam and the motherboard when you flick the switch, so there are no moving parts beyond the switch itself.

The Dark Ash Silver colourway has a beautiful copper finish on the metallic elements of the laptop’s design, and the bezels, while by no means minuscule, give just enough of a frame to the 4K display to make it pop. The bezels also double as a handy grip when using the Spectre x360 15 in tablet mode, and HP now includes a leather case to store the laptop in when in transit, complete with a little holder for the included pen.

But the Spectre x360 15 is ultimately a laptop, not an oversized tablet, and it does most things right in that regard. The keyboard keys are spaced evenly, and I rarely mistyped, despite the addition of a full-sized number pad moving the keys to the left. Its processor is zippy enough for most work, and its battery life is more than acceptable. But the trackpad is so bad, I’m left thinking a lot of people might be better off with a competitor. 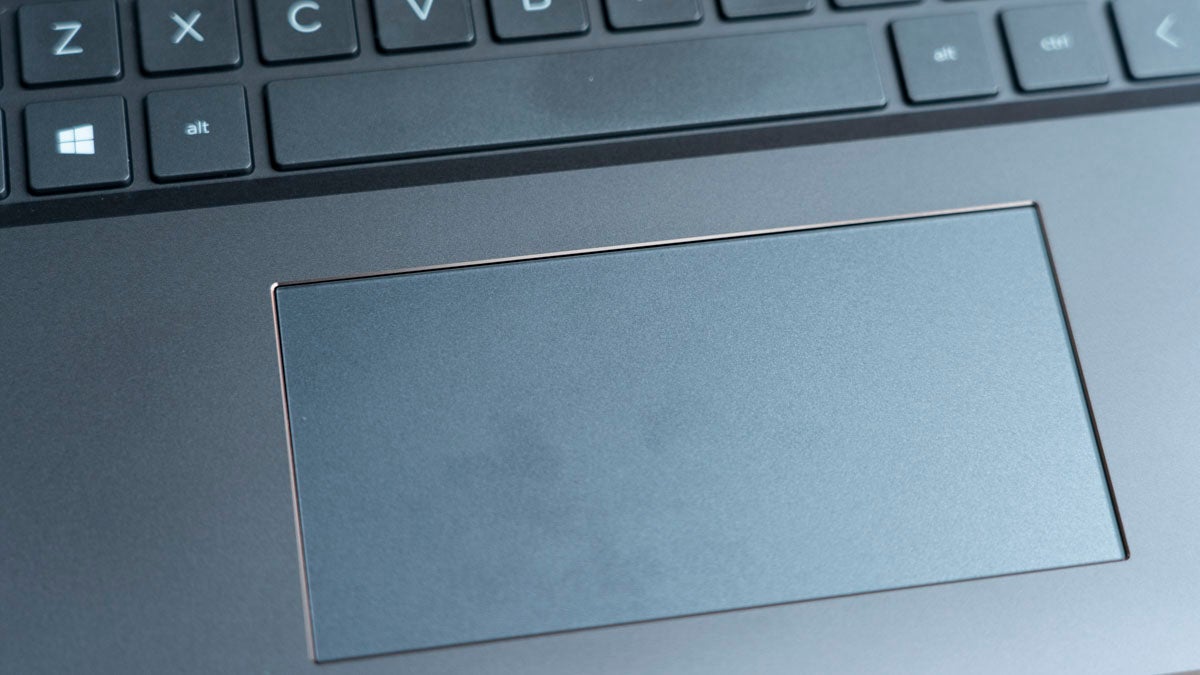 I know, I know! It’s 2019, and my biggest complaint about the laptop is the trackpad? It is precisely because it is 2019 that I have an issue. For years, bad trackpads were a hallmark of Windows devices. A truth as unassailable as “Windows computers are cheaper than Macs,” and “it’s probably the drivers.” Where Apple appeared to have invested real effort in making a trackpad that worked as well as a mouse Windows and its partners had not. At a previous job, I helped test virtually every new laptop, and I always had a USB mouse handy so that I wouldn’t have to suffer with the garbage trackpads laptops came with.

But then Microsoft created Windows Precision drivers for Windows trackpads, and the gap between macOS and Windows diminished significantly. Now, provided the hardware is not junk, a Windows Precision trackpad is just as good as a Mac one. The problem is HP opted for a trackpad managed by Synaptics drivers instead, and it’s terrible. It feels sluggish and inaccurate. HP may be fond of cutting corners (to add a power button or Thunderbolt 3 port), but this is one corner it should have left intact. 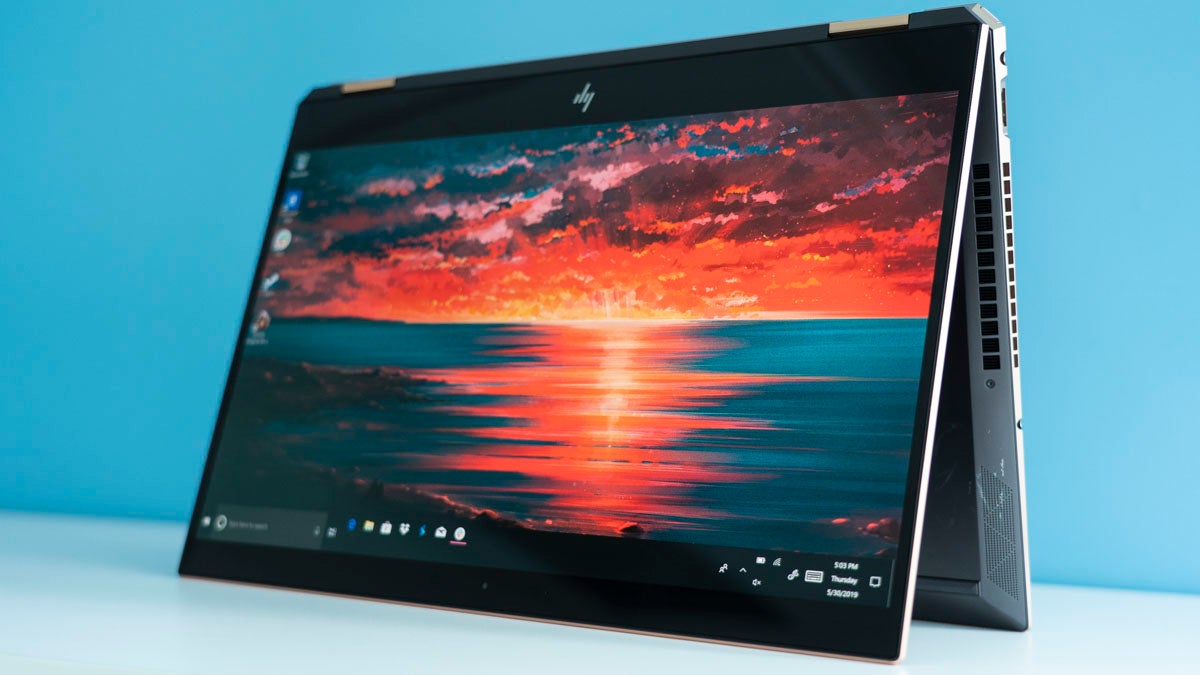 Is it enough to turn people away from an otherwise lovely laptop? That’s tricky. My colleague Sam Rutherford had fewer issues with the trackpad. His first trackpad was on a Windows device, and he claims that people who first used trackpads on Apple devices are more sensitive to a bad one. Maybe he’s right. Maybe I’ve spent too long with good trackpads to go back to bad ones. If you’re coming from a Windows device, or you don’t mind carrying around a mouse, the HP Spectre x360 15 isn’t a terrible option. It’s got more style than the competitors and that gorgeous (optional) OLED display. For some people, it might be pretty enough to ignore a frustrating flaw.