If You're a Zillionaire Neat Freak, iRobot's New Roomba and Mop Bot Are a Dream Come True

While most home robots never see much success with consumers, iRobot’s made a nice little niche for itself with its Roombas. The company has announced its most advanced bot to date—the Roomba s9+: A self-emptying, room-memorising cleaner that also costs a whopping £1,500 to start. Oh...and iRobot has also gotten around to refreshing its Braava Jet mop to be a hell of a lot more useful.

But first let’s talk about the £1,500 robot. It’s a bit surprising to see another top-of-the-line, flagship bot from iRobot. Just last year, the company put out its Roomba i7+. That bot was unique in that it eliminated one of the more annoying parts of using a robot vacuum—cleaning out the dustbin. Basically, once the i7+ finished cleaning, it would sidle up to a hulking Clean Base dock and another internal vacuum would suck out the dirt from the Roomba and into a base itself. You still get that with the s9+, but the other upgrades are more software and design-based. 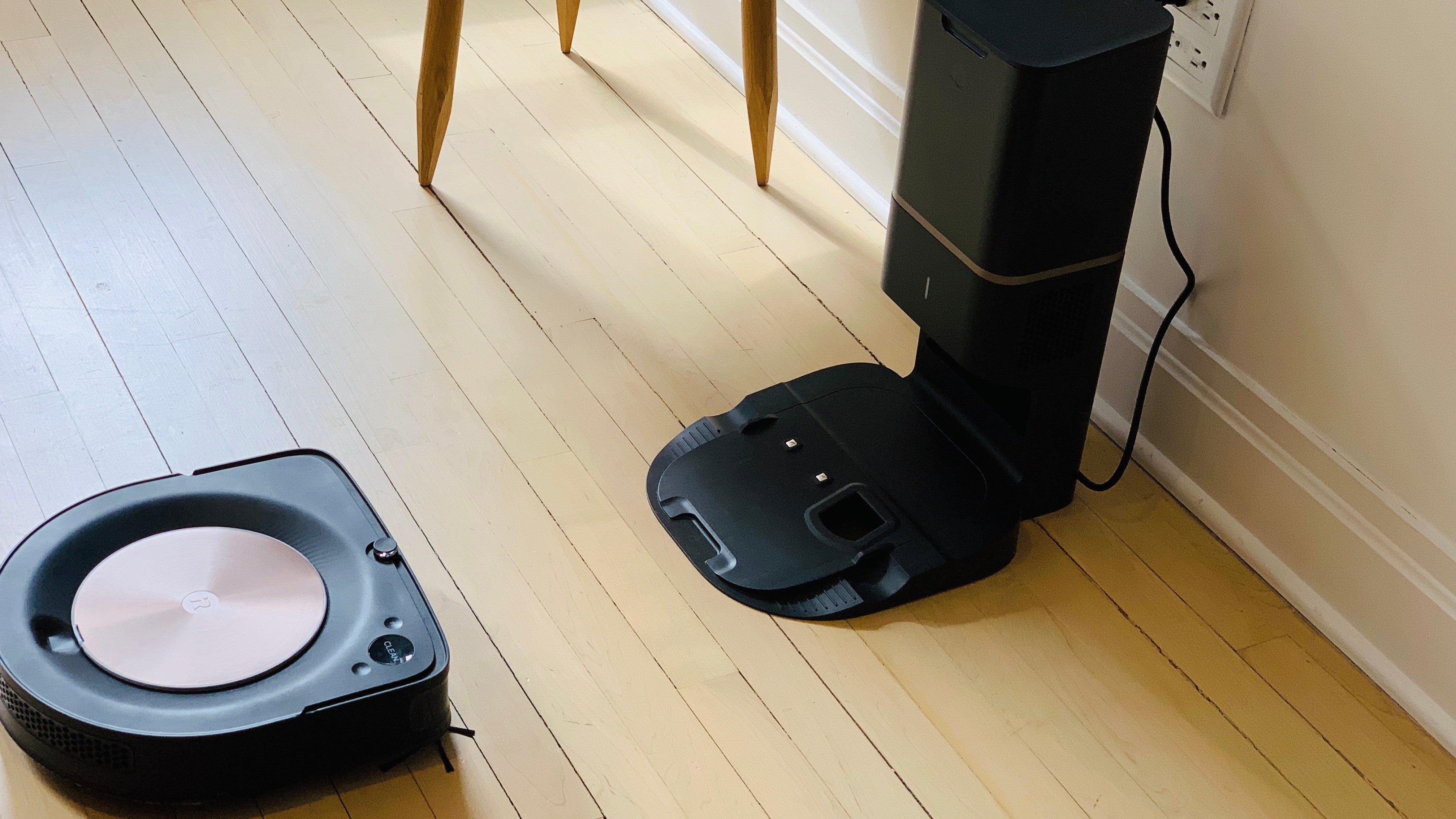 Notably, the s9+ does away with the classic circular shape of a Roomba for a D-shape. (One that’s heavily associated with iRobot’s main competitor in the space, the Neato Botvac.) At an in-person demo, iRobot told me that was because it was better suited to getting at corners and right up against walls. With the s9+, iRobot’s introducing a new mode it’s dubbing PerfectEdge. In practice, it means you can tell the robot to just clean right up along walls, doors, and entryways to nab stray dust bunnies. It’s also gone from a larger sweeper, to a single corner brush. Internally, the s9+ has a stronger motor that gives it up to 40 times the suction power of previous Roombas.

During the demo, the s9+’s suction was admittedly impressive. It was able to detect the difference between hardwood flooring and carpeting—you could hear the bot immediately increase suction once it was on a rug and then decrease it once it reached the other end. 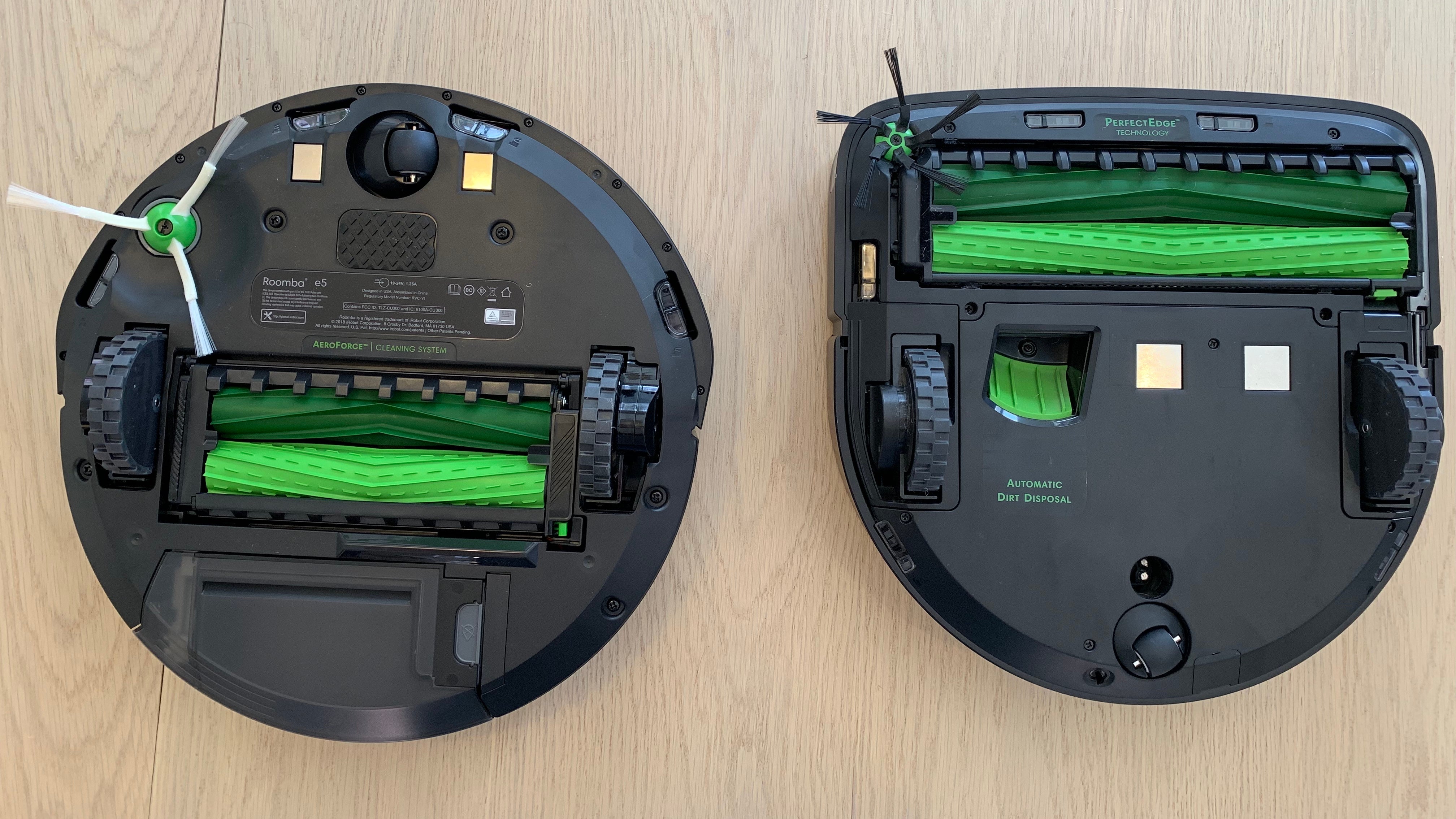 You can see the design tweaks in this side-by-side from the circular Roomba e5 to the s9+. (Photo: Victoria Song/Gizmodo)

But the thing that really sets premium bots like the s9+ apart is the navigation. On this front, the s9+ uses a 3D sensor that iRobot claims scans its surroundings 25 times per second. It can also automatically map and identify rooms, as well as remember which rooms have already been cleaned and which ones have yet to be tackled. For example, you could direct your Roomba to clean the kitchen while you lounge on the couch—and it would actually follow your command. A bit of a nightmare when you think of a potential vacuum revolt in a future robot uprising, but when I saw it in action, I admit it sparked fantasies of never ever having to vacuum again. Not yet live is a feature that would let you program specific cleans for designated areas of your house. So if your messy cat tracks litter outside its litter box after pooing every morning, a later update will theoretically let you schedule the s9+ to clean that one area every morning and that area alone...again, for £1,500.

For context, that’s the peak of Mount Everest when it comes to robot vacuum prices. You can find super cheap ones for under £100 on Amazon, though typically higher-quality budget options, like Anker’s eufy RoboVac line, with voice assistant compatibility and app control fall somewhere between the £200 to £300 range. The trade off with cheaper bots is less advanced navigation—infrared sensors and less methodical cleaning—but longer battery life. Meanwhile, you can find mapping features on bots in the £500-£600 range. Premium bots generally cost upwards of £700, and skirt the edge of £1,000. The closest competitor to the s9+ is probably the Neato Botvac D7 Connected, which retails for £800 and has the added bonus of letting you draw virtual boundaries within the app. Likewise, Dyson’s monster robot vacuum, the 360 Eye, features camera navigation and also costs £800.

The s9+ probably costs as much as it does because it’s the beefiest of iRobot’s Roombas, has the most advanced navigation, and is the only one with the D-shape design. The i7+ costs £1,200, and it wouldn’t really make sense to go less than that. Still, there’s a bit of side-eye involved when you think about how you can get good navigation and mapping on the £650 Roomba 966. Also while companies like iRobot do tend to push out updates to older models, it’s not clear if the more advanced room-specific updates will go to any Roomba that came before than the i7+. We’ve reached out for clarification and will update when we hear back.

Perhaps more impressive is the new £700 Braava jet m6. The previous Jet 240 came out nearly three years ago and was little more than a glorified motor that got your floors damp at best. But whereas the s9+ is an incremental upgrade with some design tweaks, the m6 is a meaningful update in every sense. iRobot’s added its intelligent mapping to the m6, so now you get the benefit of a bot that can automatically clean multiple rooms. Design-wise, it’s bigger, features a larger water tank, and you can now press a button to eject dirty pads straight into the trash. Improved navigation also means the m6 now comes with a charging dock, which it can locate and return to after its battery dies. Theoretically, that’s pretty sweet, though I’d need some real-life testing to see how it handles hard-to-remove stains. 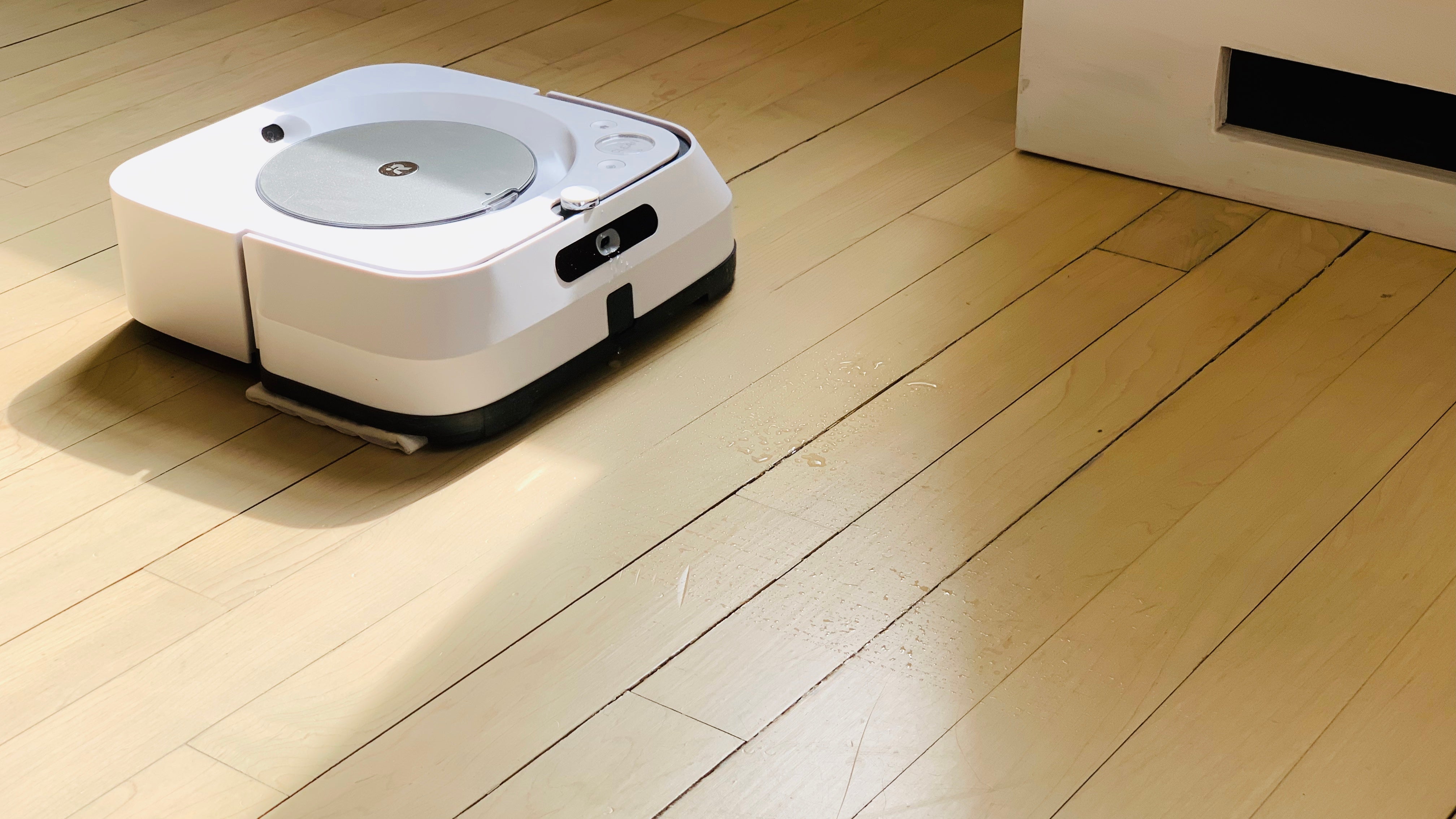 If you happen to have £2,200 just lying around and buy both bots, you can also link them up via iRobot’s app. In the demo, once the s9+ was done and had returned to its dock, the jet m6 automatically started mopping up in a different room. That’s expensive as hell, but the lazy clean freak inside me did wonder how much credit card debt I could take on to make this happen for myself. There was a bit of a lag, but it’s hard to ding iRobot over a five second wait for a feature that actually worked.

It’s also hard to say how well the robots would work in tandem in a real-life living situation. After all, hotel rooms and demo spaces are free of pets, clutter, and that inevitable snag of cords hiding behind every desk. And as advanced as both these bots are, the truth is I’ve yet to come across a robot vacuum or mop that can completely replace your standard upright. 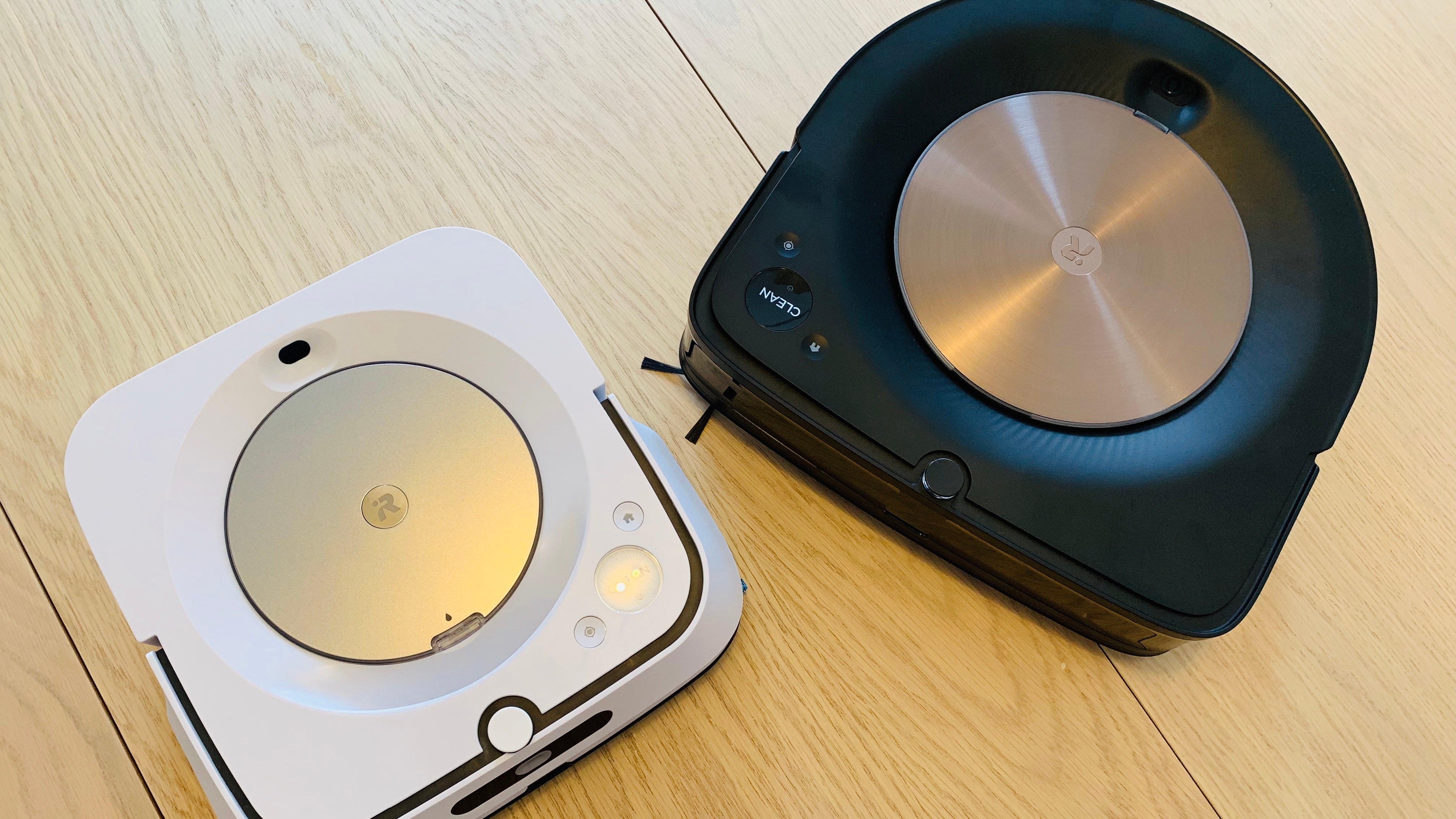 Both bots are also beholden to battery life. Though iRobot told me you could expect about an hour of cleaning—depending on the mode—that’s only good for small-to-medium-sized flats.

Still, the promise of robots who can do a decent job automatically cleaning and mopping without you having to lift a finger appears to be in reach. You just might have to sacrifice your firstborn’s uni fund to partake.