In today’s world, it feels like every company is trying to spruce up old tech with the power of the internet. We got smart locks, smart lights, smart vacuums, so why not a smart alarm clock? But with so many people opting to set alarms on their phones rather than manage yet one more device, what’s that point? Well for one, because snoozing an alarm with a smack is a hell of a lot more fun (and easier) than trying to hit a random software button on the phone you just knocked onto the floor.

Amazon was one of the first to really give the idea a shot with the Echo Spot back in 2017, but even after more than a year and a half, Google still hasn’t released a real alternative for those invested into the Google Home ecosystem. But that’s where Lenovo is hoping to swoop in and carve out some space with its new, simply named Smart Clock.

As part of the Google Home ecosystem, Lenovo’s £80 Smart Clock is basically a Google Home Mini with a 4-inch screen. Lenovo even cribbed a bit of Google’s style with the Smart Clock sporting a simple design with friendly rounded edges and a grey mesh fabric that looks and feels quite similar to what you’d find on a homegrown Google Home device.

However, I do like that instead of touch controls for volume, Lenovo opted for dedicated volume up and volume down buttons, which are much easier to use than what you get on a Google Home Mini. But perhaps my favourite thing about Lenovo’s Smart Clock is that after an alarm goes off, you can snooze it simply by giving the device a nice little whack.

There’s no special snooze button you need aim for, anywhere will do, which is exactly what you want when your sleep-addled brain just wants to get an extra 10 minutes of shuteye. And because the Smart Clock’s plastic and fabric build feels quite solid, I was never worried that it couldn’t handle the hits.

Like every other Google Assistant-powered smart speaker, you can use your voice to ask the Smart Clock to play music, check the weather, control your other smart home devices, or anything else you’d normally do. Meanwhile, that 4-inch screen has super simple UI that lets you swipe left to access a dedicated screen for all your alarms, swipe up to access device settings, or swipe right to bring back the main clock face. You can also swipe down to see a small selection of handy shortcuts for any currently set alarms, active routines, music controls, and what I think is its most useful feature: a toggle switch for any nearby smart lights. 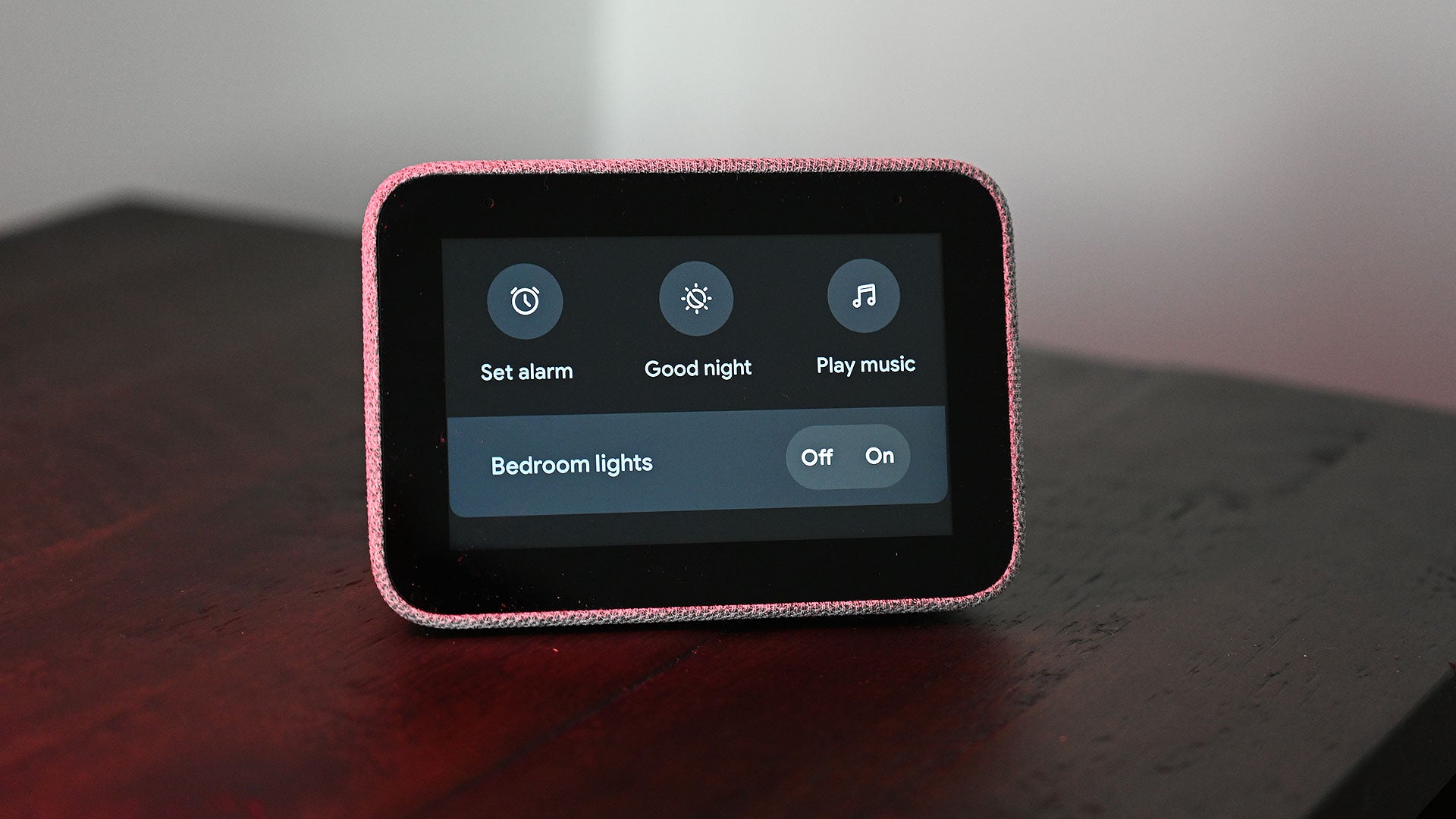 If you don’t want to ask Google to turn off the lights, you can just swipe down, tap the toggle, and do it yourself. (Photo: Sam Rutherford/Gizmodo)

This is super handy because sometimes you just want to tap something to turn off your bedroom smart lights (like say when someone else is the room is sleeping) instead of shouting at Google for help, and since the Smart Clock will probably live on a nightstand or a bedside table, it’s already in an ideal position. And as long you as make sure the Smart Clock gets added to the correct room during setup, there’s no additional tweaking or customising you have to do, as the device automatically knows which smart lights are in your bedroom.

Sadly, aside from its wake up light feature that slowly brightens up the Smart Clock’s screen prior to an alarm going off, that’s about all the Smart Clock’s display can do. You can’t use the Smart Clock to watch YouTube videos, send videos to it via Chromecast, or make video or audio calls. Now some people might ask why you would even want to do those things on something with a 4-inch 800 x 480 screen, but at the same time, why not? Especially when you consider that while it costs £40 more than the Smart Clock, these are all things the £120 Echo Spot can do.

That said, the part about not handling video calls is understandable, because even though the Smart Clock does have an ambient light sensor to help prevent the screen from blowing up your eyes at night, it doesn’t have a traditional built-in camera, which does make you feel better about a gadget that lives in the bedroom. And if you don’t want the Smart Clock to listen in on you either, there’s a dedicated microphone mute switch around back too.

But my big question about the Smart Clock is less about its abilities or features, but more how it fits into people’s increasingly gadget-filled lives. In a world where so many people simply use their phone as their alarm clock, Lenovo’s Smart Clock feels a bit superfluous. Simply putting your phone on a stand (or better yet, a wireless charging stand) delivers practically the same sort of functionality as the Smart Clock.

And if you still want a dedicated device for handling voice requests, a £30 Google Home Mini is a cheaper and simpler alternative. And that’s not even factoring Google’s recent behaviour of flinging Google Home Minis at people for free through promotions with seemingly every major company. Also, with the price of the Google Nest Hub (formally Google Home Hub) currently listed at just £99, for just £20 more, you can get a more robust smart home device that can use its screen for more than just displaying the time. 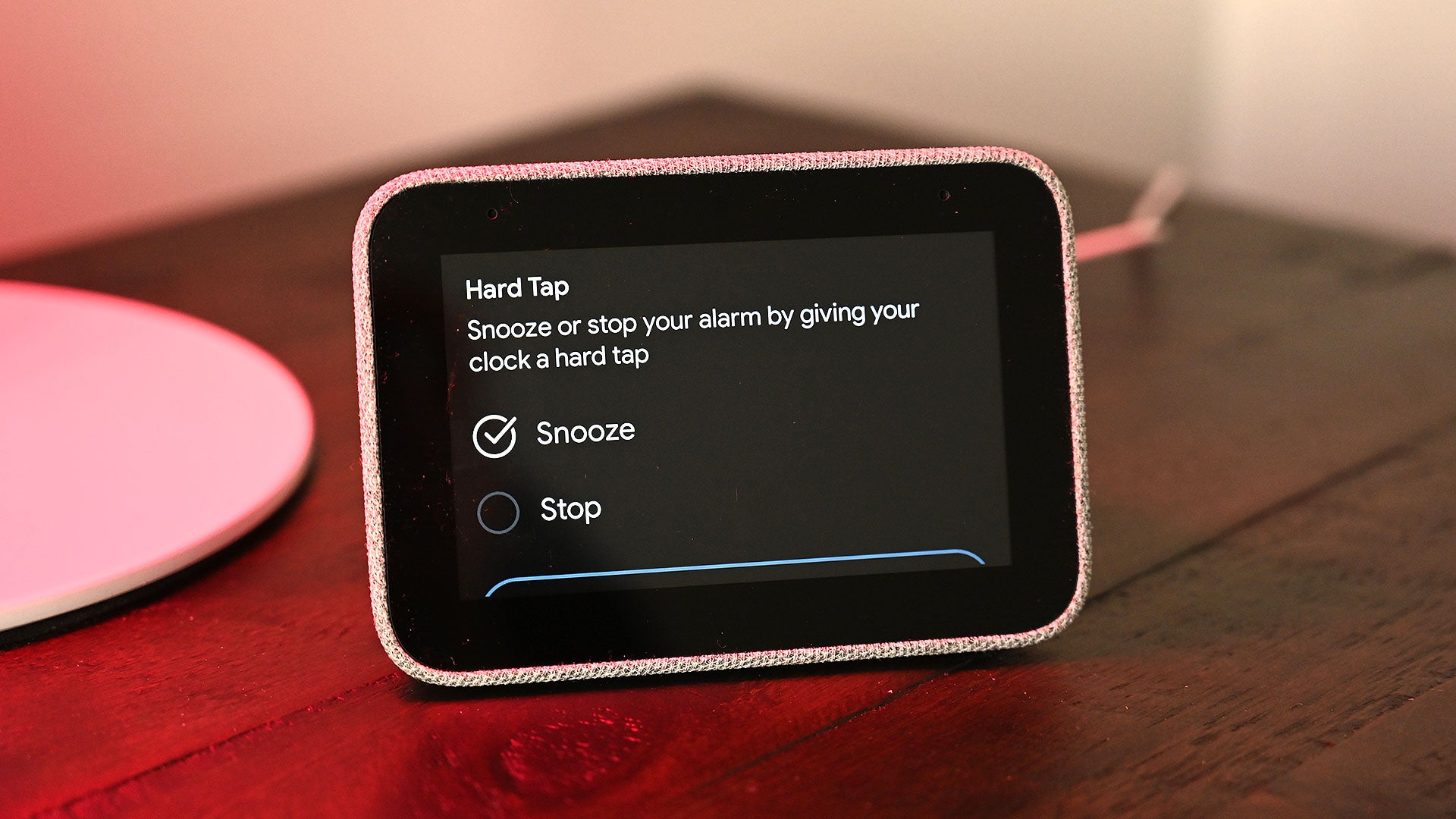 This makes the Smart Clock feel less like an essential piece of your smart home arsenal and more like a luxury gadget for people still enthused or nostalgic about the idea of a dedicated bedside clock, even one with more modern sensibilities like Lenovo’s Smart Clock. The Smart Clock has a niche, but because it’s being pinched on either side by the Google Home Mini and Google Nest Hub, it’s a rather small one. Lenovo’s Smart Clock is cute, helpful, and a well-designed bedroom addition for people who don’t already have some sort of smart speaker, but I still find myself wishing it offered just a tiny bit more. Why, oh why, does this thing not support video?