On Sunday, Microsoft announced a new iteration of the Microsoft Elite Controller. And that is great news because while the original was a landmark concept, in practice, it was kind of junk. The Series 2, at least from my limited time with it, seems like a substantial improvement.

I know plenty of people who love the original Elite Controller. For many people, it was their first experience with a user-customisable controller, and it shows off just how impactful customisation can be. The thumbsticks and D-pad can be switched out with zero effort, and there are great programmable paddles that rest near the rear grip of the controller. The Series 1 makes you feel like a pro, even if you die on hard mode.

But compared to recent hardware from small, boutique outfit Scuf, the Series 1 feels cheap. If you drop it, your thumbsticks pop off, leaving you to fish them out from under the couch. It lacks a rechargeable battery, so you’re stuck plugging it in or reaching for batteries if you ever want to play for more than a few hours.

My early impression is that the Series 2 appears to have fixed those two annoyances. Microsoft claims its rechargeable battery lasts up to 40 hours. And in a demo, I dropped the new controller a few times, from a height of about 3 feet, and the thumbsticks stayed in place. (Obviously, final conclusions will require more tests.) 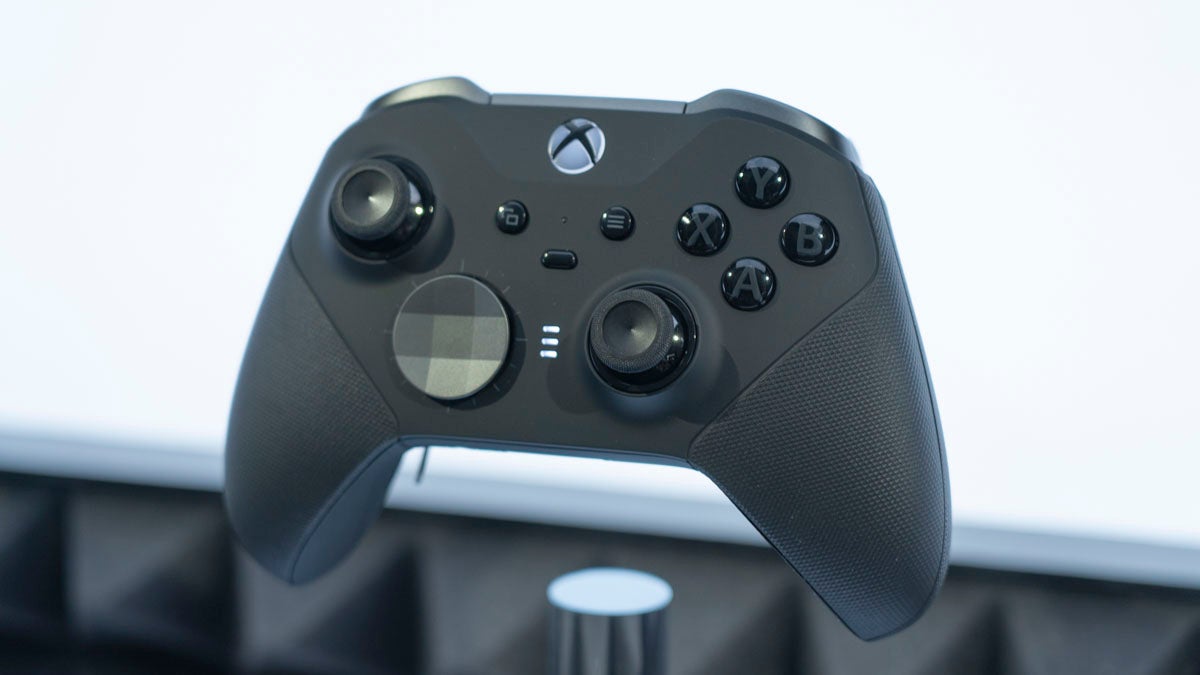 The thumbsticks are tunable, so you can turn a little screw at the centre of the thumbstick input to control just how much pressure you need to apply to a thumbstick when you’re using it. That’s useful for games in which you can’t adjust the input sensitivity. In games where you can, it gives you one more tool for finetuning your play. Unfortunately, that feature wasn’t available for testing when I tried out the controller.

I did try out the new switches on the back, near the paddles, which control the draw distance of the lower left and right triggers. In most shooter games, you pull these to activate a scope or fire. A lot of people like to adjust the draw length with other controllers to pull off shots faster. Though in my experience, it’s not useful in every game. In Destiny 2, for example, you have to fully press down on the trigger to shoot or accelerate your vehicle. Microsoft only had the controllers connected to a demo game based on Fortnite, so I didn’t have the opportunity to see how the triggers will work in most games, but it’s a promising feature.

The Series 2 comes with a lot of extra STUFF. (Photo: Alex Cranz/Gizmodo)

There’s a little switch by the paddles for adjusting the triggers. (Photo: Alex Cranz/Gizmodo)

The Elite Series 2 has many similar features to the Prestige, while also tacking on a few extra touches, like the adjustable thumbsticks. And it feels sturdy with a lovely textured rubber grip that might help cut down on sweaty hands. At 345 grams, it’s also heavier than the Prestige’s 262g. While Scuf listed the lightness of the Prestige as a bonus, I quite like the heft of the Series 2. It makes it feel substantial. Maybe even substantial enough that it could end up being the superior device when you want to spend half the cost of an Xbox One on a controller.

The Xbox Elite Series 2 controller is available for pre-order now for £160. We’ll know if it’s worth that price when we review it closer to its ship date, 4 November 2019.