An updated estimate shows the September 2017 nuclear test by North Korea was equivalent to 250 kilotonnes of TNT—an explosive yield 16 times greater than the bomb dropped on Hiroshima during the Second World War. The explosion was also an order of magnitude stronger than the country’s previous five tests.

New research published this week in the Journal of Geophysical Research: Solid Earth is providing new estimates for an underground nuclear test conducted by the Democratic People’s Republic of North Korea on 3 September 2017. The bomb, detonated at Punggye-ri nuclear test site within Mount Mantap, produced 250 kilotonnes of TNT, according to the new research. Given uncertainties, the strength could be as high as 328 kilotonnes. The 2017 test was also an order of magnitude greater than any of the previous tests conducted at the site from 2006 to 2016, indicating a sudden increase in capability.

The authors of the new study devised a more accurate estimate by taking the region’s geology into account. To determine the power of these weapons from afar, scientists study the seismic waves produced by these tests.

North Korea withdrew from the 1968 Treaty on the Non-Proliferation of Nuclear Weapons in 2003, and it started testing nukes in 2006. The country has now conducted a total of six tests, each one stronger than the last. But as the new research shows, the difference detected between the fifth and sixth tests is particularly alarming. The jump from roughly 20 kilotonnes to 250 kilotonnes signifies a dramatic boost in North Korea’s nuclear potential.

“The scary thing is that this was such a big device.”

“From 2006 to 2016 North Korea steadily increased the size of the events, from somewhere around 1 kilotonne up to around 20 kilotonnes. The very early events looked like they didn’t work very well, because they were unusually small,” study co-author Thorne Lay, a seismologist at the University of California Santa Cruz, said in an American Geophysical Union press release. “And then in one year they jumped up to 250-ish kilotonnes. The scary thing is that this was such a big device.”

This revised estimate is not entirely surprising. The 2017 test triggered a 6.3 magnitude earthquake—an event that literally moved the mountain. The subterranean explosion also caused the collapse of the nuclear chamber at the at Punggye-ri nuclear test site. 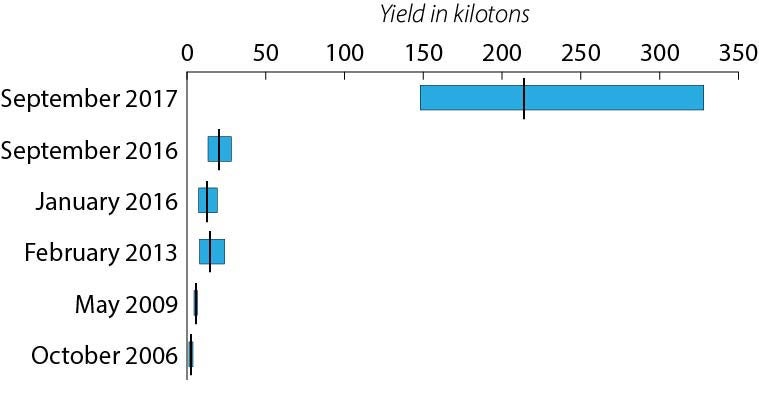 Updated estimates of the six nuclear tests conducted by the DPRK to date. Black vertical lines indicate the estimated yield of each device, while the blue bars show the estimated range given uncertainty. (Image: AGU)

A 2018 study assessed the yield of the device at 209 kilotonnes. It’s standard practice in US intelligence to apply an error margin of a factor of two, so reported estimates ranged between 120 to 304 kilotonnes. The new study has upgraded the strength further still, to 250 kilotonnes with a margin of error between 148 and 328 kilotonnes. At the highest bound, that’s nearly 22 times the strength of the bomb dropped on Hiroshima, which was 15 kilotonnes.

To devise their updated estimates, the researchers analysed previously compiled data about the way sound travels through different types of rock. A soundwave, for example, will behave differently when it propagates through granite compared to sandstone. And because the geology of Mount Mantap and the surrounding area is not well known, the scientists had to use the explosions from previous nuclear tests conducted at Punggye-ri to calibrate their models. 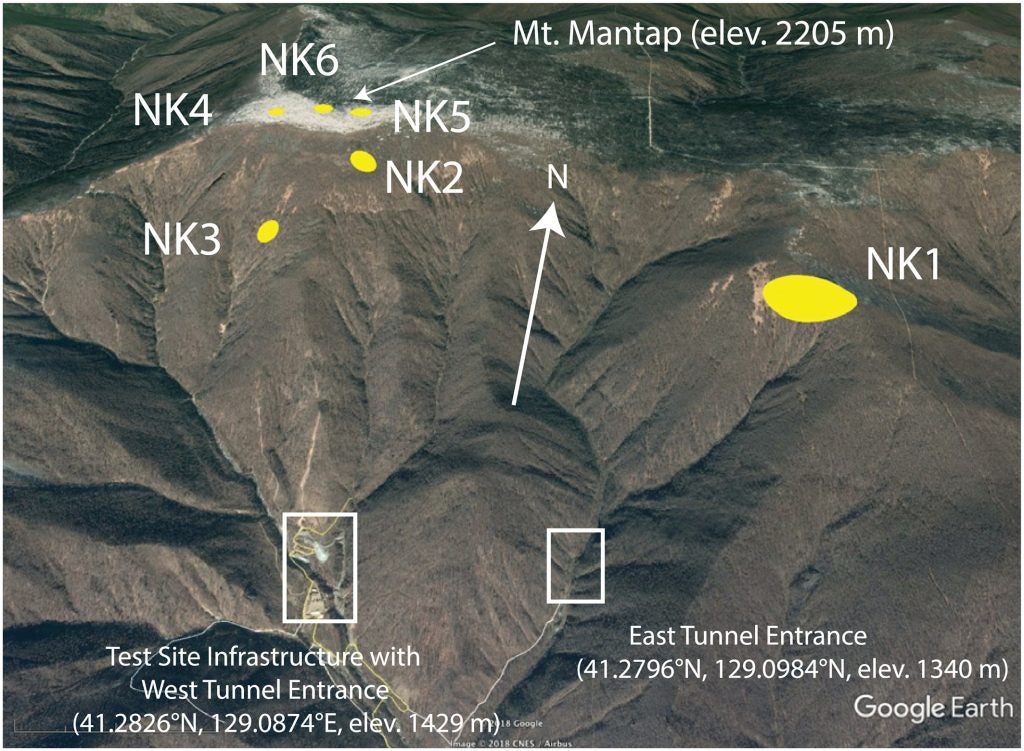 Satellite view of Mount Mantap, the site of the nuclear tests. The exact location of each test, designated from NK1 to NK6, are shown in yellow. (Image: Google Earth/AGU)

An important consideration had to do with the way underground blasts bounce back from the surface like an echo—an effect that distorts seismic recordings taken from a distance. With this in mind, the researchers estimated the “relative sizes of the bombs by finding a combination of depth and yield that compensated for the reflection of the sound from the surface,” as the AGU noted in its press release.

“They’ve modelled what the reflection would look like for different yields and depths and solved for what the signal would look like if you didn’t have to account for this returning wave. The most impressive thing in the paper for me is how similar these waveforms are. This is what gives me confidence that they’ve done a good job,” geologist Steven Gibbons, who wasn’t involved with the new study, said in the AGU press release. “I think the authors have pushed it to the limits with this paper. I would be surprised if we can get tighter constraints on the absolute yield without additional information.”

As for the type of weapon used in the 2017 test, Lay said it’s either a boosted fission bomb or modest fusion device, the latter of which is also known as a thermonuclear or hydrogen bomb. Fusions bombs combine hydrogen nuclei to form helium, resulting in enormous explosive potential—the strongest of which, the Tsar Bomba in 1961, produced upwards of 50,000 kilotonnes.