Odd Skull in Museum Finally Confirmed as a Narwhal-Beluga Hybrid

Back in 1990, subsistence hunters in Greenland gave a skull to scientists. Its origin, they explained, was a strange creature, evenly grey, with flippers like a beluga but a tail like a narwhal. The specimen was larger than either a beluga or a narwhal’s skull, but seemed to contain the proportions of both.

Now, researchers are announcing a genetic analysis of DNA they extracted from the skull. And indeed, their results showed that it belonged to the first recorded hybrid beluga-narwhal. A belugawhal. A narwhaluga.

“This is a one-off individual that tickles our scientific and childhood curiosity towards nature,” the study’s first author, Mikkel Skovrind from the Natural History Museum of Denmark at the University of Copenhagen, told Gizmodo. “That’s why it’s interesting.”

Skovrind was doing his Ph.D in beluga whale genomics, and his office sat right next to a collection of beluga and narwhal skulls. But one skull looked different – most notably, its teeth splayed outward, very unlike a beluga’s regular-looking set of teeth and the narwhal’s single, overgrown tooth-tusk. Researchers had long since hypothesised it was a hybrid, based on the shape. “It ticked all of the boxes for a project I wanted to spend time on,” he said.

The team extracted DNA from the teeth and from tissue samples from eight belugas and eight narwhals taken from West Greenland’s Disko Bay. The results of the analysis revealed that the creature was the male offspring of a male beluga and a female narwhal, according to the paper published yesterday in Scientific Reports. And it seemed to be a healthy individual before it was hunted, having reached full maturity. 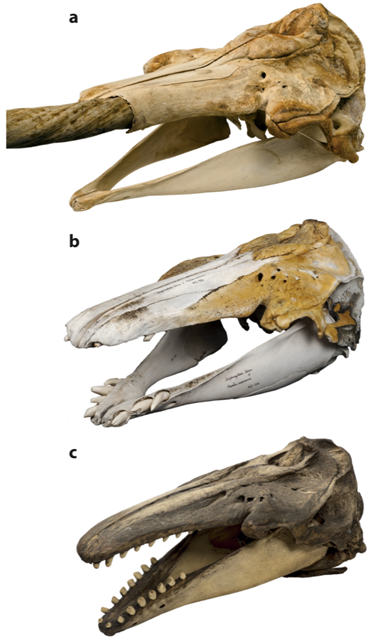 A narwhal skull (a); the hybrid skull (b); and a beluga skull (c). (Photo: Mikkel Høegh Post, Natural History Museum of Denmark.)

These two species represent two of the three cetaceans found all year long in the Arctic, according to the paper. And of course, both have made a name for themselves in popular culture; the beluga from the well-known children’s song “Baby Beluga,” and the narwhal from its mythical single tooth that gives it a unicorn-like appearance.

But how did something like that happen? There’s much that researchers don’t know about the movements and mating behaviour of these two cetaceans, according to the study authors. Yet they do know that both animals mate in the spring, as Arctic sea ice breaks up, and both animals have been found in pods of the other species. Both species appear in large numbers during spring in Disko Bay.

Hybridisation is already rather common in cetaceans, Skovrind told Gizmodo, so they weren’t surprised that the two were able to produce offspring. What’s more interesting is that both of these animals are social and must have some sort of mate selection process that didn’t occur properly in this case.

Improvements in genome sequencing have allowed researchers to increasingly report mixing between species, Rue Hoelzel, a professor in the biosciences at Durham University in the United Kingdom who was not involved with the study, told Gizmodo. He thought the work offered compelling evidence – after all, the skull already looks pretty convincingly to be a narwhal-beluga hybrid.

Martin Nweeia, a lecturer in the Department of Restorative Dentistry and Biomaterials Sciences at the Harvard School of Dental Medicine, also not involved in the study, told Gizmodo that breeding between two close species isn’t always beneficial, since hybrids might not have useful survival traits of both animals. Hybridisation isn’t a net good thing, as we’ve explained; if the resulting hybrid is infertile, it can exacerbate population decline in a threatened species. This individual probably did fine, though, before he encountered the hunters.

Skovrund wasn’t worried about this specific hybridisation example, though climate change more generally likely threatens both species. But he hopes to further understand examples like this – would this first-generation hybrid have been able to breed?

Ultimately, he hopes to continue to be involved in research on these two species in case more hybrid examples pop up, as his group has a large dataset of both narwhal and beluga DNA and skulls.