New archaeological evidence suggests the inhabitants of Çatalhöyük, an ancient city founded over 9,000 years ago in what is now Turkey, were subject to many urban problems we’re familiar with today, including overcrowding, interpersonal violence, and sanitation issues.

At its peak some 8,500 years ago, Çatalhöyük (pronounced cha-tal-hoo-yook) was home to an estimated 3,500 to 8,000 people. This Neolithic farming settlement, located 40 kilometres (25 miles) southeast of Konya in south-central Turkey, was an extraordinarily large community for its time. Archaeologists consider it a proto-urban city, having emerged only a few thousand years after humans began to transition from a hunter-gatherer lifestyle to farming.

New research published this week in Proceedings of the National Academy of Sciences shows that Çatalhöyük was a sign of things to come, both in terms of human social organisation and the problems caused by living in large cities. The residents of Çatalhöyük “experienced what happens when you put many people together in a small area for an extended time,” Clark Larsen, the lead author of the new study and an anthropologist at The Ohio State University, said in an OSU release. Indeed, like the city dwellers of today, the inhabitants of Çatalhöyük had to contend with infectious diseases, overcrowding, violence, and environmental degradation.

Appearing around 7100 BCE, Çatalhöyük quickly grew from its humble beginnings as a small community of farmers who lived in mud-brick houses. The settlement thrived between 6700 and 6500 BCE, followed by a rapid decline that saw the city deserted by 5950 BCE, as the researchers describe in their paper.

Çatalhöyük was first excavated by archaeologists in 1958. Located on the Southern Anatolian Plateau, it measures 32 acres in size and features up to 18 settlement layers extending down more than 21 metres (69 feet); the city was continually occupied for over 1,150 years. Çatalhöyük was declared a UNESCO World Heritage Site in 2012. The most recent excavation project ended two years ago, setting the stage for the new study. 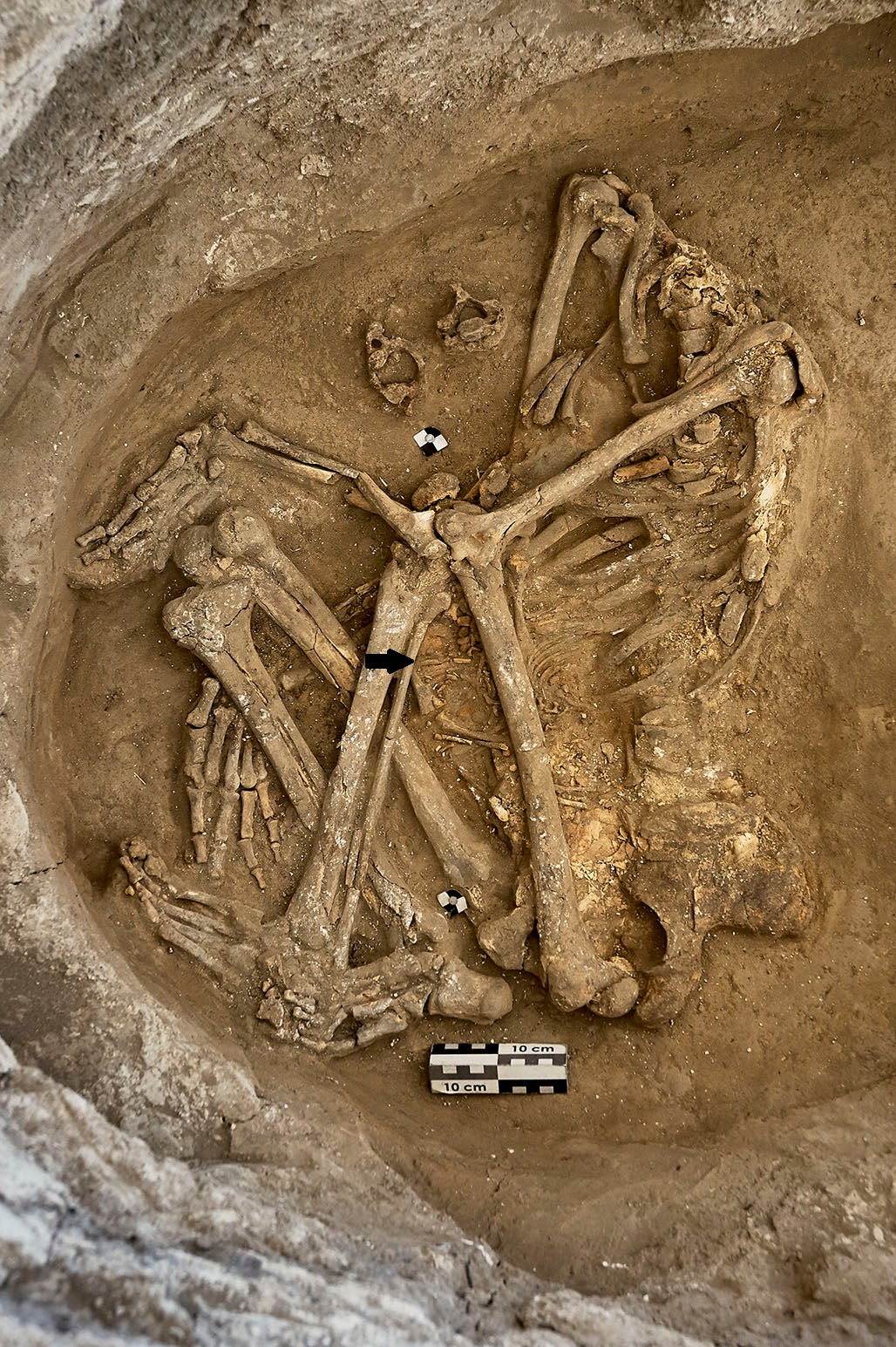 This headless adult female was buried at Çatalhöyük with her unborn fetus (indicated by black arrow at centre). Skull removal prior to burial was a common funeral practice in the region at the time. (Image: Çatalhöyük Research Project/Jason Quinlan)

The authors of the new study, in addition to analysing the remnants of plants and animals, also examined the skeletal remains of 742 human individuals dating to between 7100 and 5950 BCE. Isotopic analysis showed that the inhabitants of Çatalhöyük ate lots of wheat, barley, rye, some wild plants, sheep, goats, and some wild animals. This Anatolian community had adopted a Neolithic diet rich in plant carbohydrates and foods like bread and porridge—but this introduced a rather familiar problem: tooth decay. As many as 13 percent of the adult skeletons found at the site exhibited dental cavities.

“They are living in very crowded conditions, with trash pits and animal pens right next to some of their homes,” said Larsen. “So there is a whole host of sanitation issues that could contribute to the spread of infectious diseases.”

Fascinatingly, the skeletons also exhibited more wear-and-tear during the settlement’s late period. Specifically, late period Çatalhöyük inhabitants walked significantly more than their predecessors. The authors of the new study said this was evidence that farming sites were moving increasingly farther away from the city over time. The region also began to dry out, which didn’t help.

“We believe that environmental degradation and climate change forced community members to move further away from the settlement to farm and to find supplies like firewood,” said Larsen. “That contributed to the ultimate demise of Çatalhöyük.”

Life in Çatalhöyük was rough. It’s possible “that overcrowding led to elevated stress and conflict within the community,” said Larsen. Analysis of the skeletons showed signs of interpersonal violence, as evidenced by a plethora of head injuries. Of 93 skulls analysed, 25 exhibited evidence of healed fractures. Twelve skulls showed evidence of trauma that was inflicted on multiple occasions. These injuries were observed on both male and female skulls, and the injuries tended to appear on the back of their heads, which suggests the victims were struck from behind.

Interestingly, the new study has resulted in somewhat of a mystery. The inhabitants of Çatalhöyük engaged in a funeral practice in which dead individuals were buried beneath the floor of their home. However, a genetic analysis of these remains shows that most individuals who were buried together were not biologically related. This was an unexpected finding that is worthy of further study, noted the authors.