In a welcome bit of news as water shortages hit major cities worldwide, scientists have discovered an enormous low-salinity aquifer off the US East Coast. The researchers say it could indicate other such aquifers trapped beneath the salty seas in ocean sediments across the planet.

Hints of the aquifer’s existence go all the way back to the 1970s, when companies drilling for oil off America's Eastern seaboard would occasionally encounter relatively freshwater instead. But scientists weren’t aware of its full extent until a Columbia-led research expedition set out to map subterranean water offshore in 2015. The results of that analysis, published Tuesday in Scientific Reports, suggests this thing’s gigantic: about 650 feet deep, extending up to 50 miles wide, and stretching from New Jersey to Massachusetts and possibly farther.

All told, the researchers estimate the aquifer contains some 670 cubic miles of water. As noted in a press release, if brought to the surface it could create a lake spanning 15,000 square miles.

“There’s been drilling on all continents showing this [offshore subterranean freshwater] occurs everywhere,” lead study author Chloe Gustafson, a PhD candidate at Columbia’s Earth Institute, told us. “But drilling boreholes are just point measurements. Our study confirms [an] extensive and robust aquifer extending from the shore.”

To reach that conclusion, the researchers surveyed off the coast of the state of New Jersey, where boreholes previously indicated freshwater, and off the coast of Martha’s Vineyard, where onshore drill holes and models hinted at the presence of freshwater in offshore sediments. They used two different electromagnetic (EM) mapping techniques, deploying passive receivers on the seafloor to measure ambient EM fields, and towing a transmitter behind the ship that emitted its own EM field. As Gustafon explained, when EM fields penetrate the seafloor, the nature of the waves changes as they interact with water of different conductivities. Since saltwater is much more conductive than freshwater, the two create distinct EM profiles. 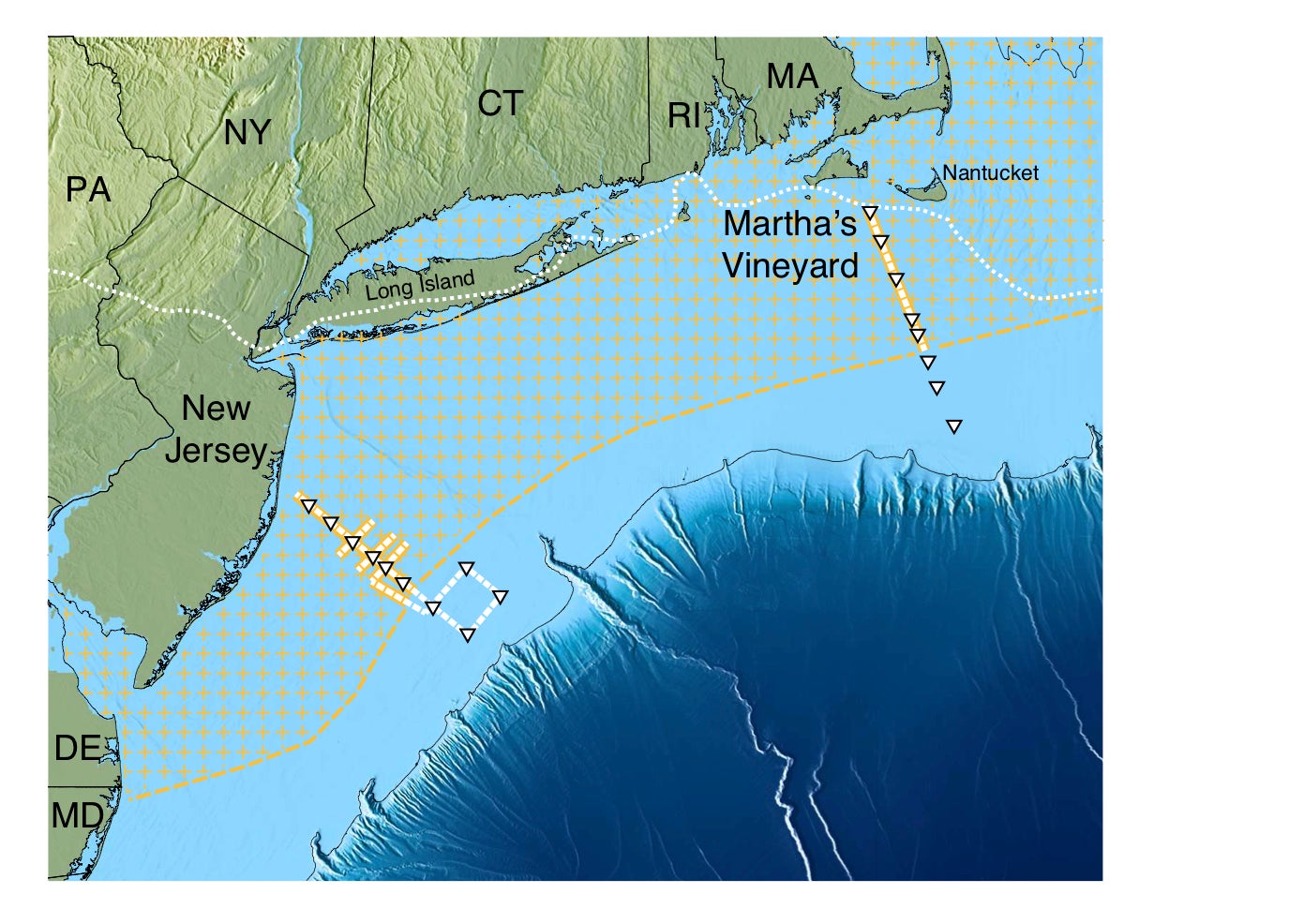 Hatched area shows the likely extent of the aquifer scientists have mapped off the US eastern seaboard, with triangles showing ship tracks. The dotted white line shows the southern extent of the Laurentide Ice Sheet during the last Ice Age. (Image: Courtesy Chloe Gustafson)

This analysis revealed a continuous, low-salinity aquifer system in both locations, most of it separated from the overlying seawater by hundreds of feet of sediment. Given the similarities between the two sites and the fact that onshore aquifers exist up and down the coast, the researchers believe it’s very likely the aquifer spans this entire stretch of coastline—although doing more surveys between New Jersey and Massachusetts in order verify that would be a “next logical step,” Gustafon said.

You might wonder how a giant freshwater aquifer winds up buried beneath hundreds of feet of seawater. The likely answer is that it didn’t use to be at the bottom of the ocean at all.

During the last Ice Age, sea levels were much lower and much of what’s now the continental shelf would have been exposed land. At that time, rivers and rainfall could have started to build up an aquifer from the surface. In the case of Martha’s Vineyard, which was buried beneath the Laurentide Ice Sheet, glacial meltwater could have also contributed. Over time, more sediments would have been deposited, trapping this water in place. Eventually, the Earth warmed up, the ice sheets retreated, sea levels rose, and the aquifer found itself at the bottom of the sea.

At least, that’s a working theory scientists can now try to test by taking samples of the water and looking at the mix of isotopes present. There’s also evidence that the aquifer is being recharged in modern times—as Gustafon noted, her analysis found the freshest water closest to the shoreline. “That indicates to us that freshwater is coming from onshore and making its way offshore,” she said.

However the aquifer got there, its existence raises the tantalising possibility of other large aquifers off coastlines around the world, which could become a resource for water-strapped coastal cities as population growth and climate change stretch onshore resources thin. It’s a resource that would have to be mined, effectively, and if offshore aquifers turn out to be largely glacial in nature, that would make them non-renewable. Also, the aquifer off the US East Coast does contain low levels of salt, and some desalination would be required to make it drinkable, which comes with its own environmental consequences.

Nevertheless, Gustafon is hopeful this discovery could wind up being a boon for humanity in a thirstier future.

“In the case of the East Coast of the US, we’re not really short on water,” she said. “In regions where water resources are more stretched, I think this could be a really unique resource that people don’t typically think about.”