A lot of amazing technologies developed at universities or corporate R&D labs never see the light of day because they’re just too expensive to turn into consumer-ready products. But by copying how bats navigate the world at night, researchers have come up with a way to see hidden objects around corners using cheap mics and speakers.

The idea of safely peering around corners using technology might not sound that new to you, because back in 2012, 2015, and subsequent years, researchers found a way to do just that using cameras and lasers.

That technique, known as non-line-of-sight (NLOS, for short) imaging, would bounce a series of laser pulses off a wall to get around a blind corner, while a camera would measure the light that bounced back, which was then used to generate a 3D image of whatever was hidden out of sight. It worked quite well, but the hardware employed was slow, with a limited range, and was expensive. That steep price tag is one of the biggest reasons your car doesn’t yet have the ability to spot unseen hazards when you roll up to an obscured corner.

But researchers at Intel and the Stanford Computational Imaging Lab have managed to recreate what is essentially the same NLOS technology, but using modulated sound waves blasted from off the shelf speakers and microphones. The same way a bat can spot obstacles or dinner using echolocation, this approach can visualise unseen objects using the echos it generates. 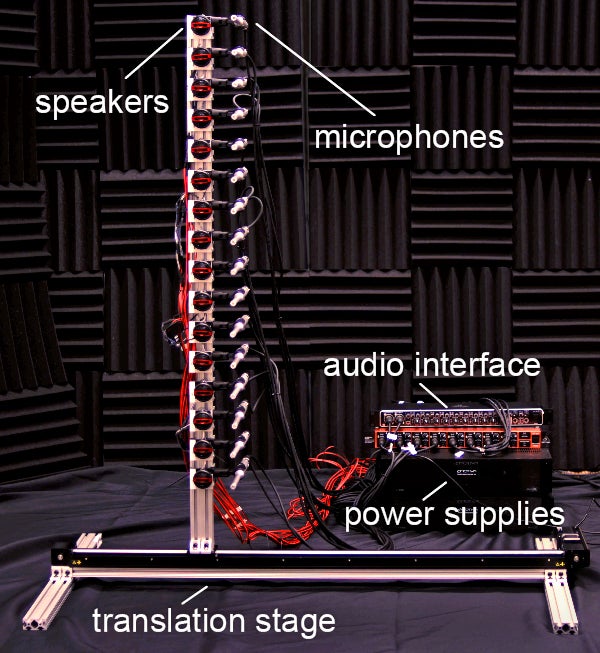 At the moment, the equipment used for acoustic NLOS imaging is far from elegant. The researchers created a vertical tower of 16 microphone and speaker pairs that slides back and forth along a metre-wide stage. As the tower moves, the speakers blast a specifically modulated acoustic signal that’s detected by the mics. The setup generates a grid of data points and based on how long it takes for the acoustic signals to bounce back to each of the microphones, a 3D image of a hidden object or obstacle can be generated.

Strapping one of these arrays to the bonnet of your car seems impractical, but eventually, the equipment could be miniaturised and hidden inside a vehicle’s bumper, or reduced to just a tiny component that could be built into a host of different devices. 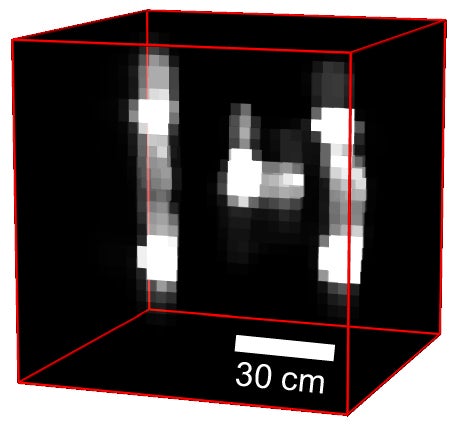 In addition to cheaper hardware, the researchers have found their acoustic approach to NLOS imaging to be both faster than using cameras and lasers, with an improved range, which could be beneficial to autonomous vehicles one day. But there’s still work to be done when it comes to converting the measured echos into visual imagery, and then understanding what’s being seen. Knowing an object is around a corner is one thing, but being able to discern what is actually there is far more useful when applying this technology to real-life situations. A letter ‘H’ that was created by the researchers out of foam and then hidden behind an adjacent wall is barely recognisable in this acoustic image, but as the research progresses, so will the fidelity and accuracy of the images it can generate.