Members of the American Astronomical Society are speaking out about the potential for large satellite constellations, such as SpaceX’s Starlink network, to interfere with scientific observations of space. In a statement issued this week, the AAS said we need to re-think this technology before it’s too late.

On 23 May, SpaceX delivered 60 Starlink satellites to low Earth orbit (LEO). This drop in the bucket likely represents the beginning of a deluge. The Elon Musk-led company would like to launch anywhere from 800 to 1,000 interconnected Starlink satellites—and possibly as many as 12,000—to complete the constellation. Once the network is operational, Starlink will deliver affordable high-speed internet to paying customers around the globe, including to remote regions. Other companies are planning to enter into this market as well, including OneWeb, Space Norway, and Telesat.

A day after the inaugural Starlink launch, skywatchers were treated to an unusual spectacle, as the 60 satellites, each weighing 500 pounds (227 kg), could be seen streaming across the night sky like a row of glowing ants. So strange was the sight that some people mistook it for alien ships. SpaceX said the feature was temporary, as the satellites are slowly drifting away from one another. Given the slew of launches required to complete the constellation, however, it’s fair to say these satellite trains will become a semi-regular, albeit transient, feature of the night sky. 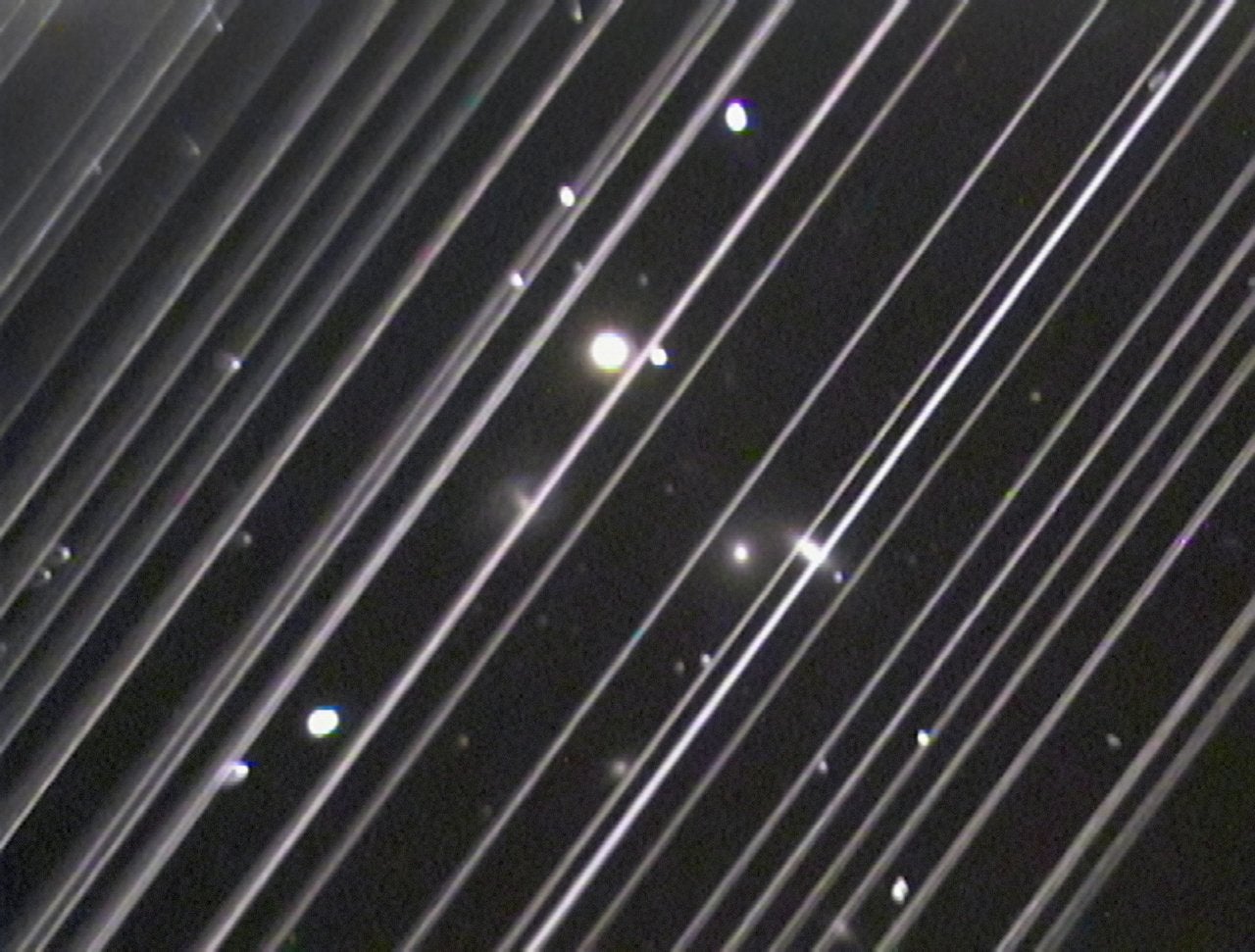 A group of galaxies imaged by a telescope at Lowell Observatory in the US state of Arizona on 25 May 2019—just two days after SpaceX deployed 60 Starlink satellites. The diagonal lines running across the image are trails of reflected light left by more than 25 of the satellites as they passed through the telescope’s field of view. Mercifully, the satellites are drifting apart, but scenes like this could become the new normal. (Image: Victoria Girgis/Lowell Observatory)

More problematic will be the intense number of satellites drifting in LEO, including those belonging to SpaceX and other ventures. There’s now legitimate concern that satellites in megaconstellations, as they’re called, will eventually outnumber visible stars in the night sky. But in addition to contributing to light pollution and obscuring our natural view of the cosmos, these satellites could disrupt important astronomical observations.

In a 27 May tweet, Elon Musk brushed away such concerns, saying Starlink will have “ 0% impact on advancements in astronomy.” In another tweet, Musk said he “sent a note to Starlink team last week specifically regarding albedo reduction” to reduce the reflectivity of the satellites. The SpaceX CEO believes “potentially helping billions of economically disadvantaged people is the greater good.”

The American Astronomical Society, whose members are currently gathered at its 234th meeting in St. Louis, in the US state of Missouri, aren’t as convinced. They’re concerned that Starlink and other pending megaconstellations could cause lots of problems. As noted in an AAS statement issued this week, its trustees have adopted the following position statement on the matter:

The American Astronomical Society notes with concern the impending deployment of very large constellations of satellites into Earth orbit. The number of such satellites is projected to grow into the tens of thousands over the next several years, creating the potential for substantial adverse impacts to ground- and space-based astronomy. These impacts could include significant disruption of optical and near-infrared observations by direct detection of satellites in reflected and emitted light; contamination of radio astronomical observations by electromagnetic radiation in satellite communication bands; and collision with space-based observatories.

The AAS recognises that outer space is an increasingly available resource with many possible uses. However, the potential for multiple large satellite constellations to adversely affect both each other and the study of the cosmos is becoming increasingly apparent, both in low Earth orbit and beyond.

The AAS is actively working to assess the impacts on astronomy of large satellite constellations before their numbers rise further. Only with thorough and quantitative understanding can we properly assess the risks and identify appropriate mitigating actions. The AAS desires that this be a collaborative effort among its members, other scientific societies, and other space stakeholders including private companies. The AAS will support and facilitate the work by relevant parties to understand fully and minimise the impact of large satellite constellations on ground- and space-based astronomy.

As the AAS correctly pointed out, the next important step is to figure out how these constellations might affect astronomical observations. These findings will then allow us to devise the requisite safeguards and policy changes.

Jessica West, a program officer at Project Ploughshares and the managing editor of its Space Security Index, believes the AAS is right to raise the issue.

“Significantly changing the view of the night sky—if that is what happens—extends beyond science and affects everyone on Earth,” West told Gizmodo in an email. “This is not a conversation that we are having, and it extends far beyond this single example.”

The question, she said, always seems to be “what is allowed” in space, without much thought about “at what cost” and “to whom.” At the same time, however, she said we need to be mindful about balancing the interests of various users.

“I think that this situation is encouraging that kind of conversation, and SpaceX seems to be thinking about it,” she said. “Of course there are other concerns with such large constellations, most critically the creation of debris and non-functioning satellites as well as space traffic management.”

Jonathan McDowell, an astronomer at the Harvard-Smithsonian Center for Astrophysics, said the AAS response was both appropriate and measured.

“My own preliminary calculations indicate that different kinds of astronomy will be affected to different degrees by different proposed megaconstellations,” said McDowell in an email to Gizmodo. “I think [the AAS] will find that megaconstellations will have a significant effect on astronomy, but that it will be possible to develop design guidelines that won’t be too stringent that will ensure the effect is not disastrous.”

That said, if a future megaconstellation fails to take these concerns into account, “eventually there WILL be one which has disastrous effects on astronomy and on the night sky,” he said. “Starlink was a good wakeup call in that respect.”

New technologies tend to be a step ahead of sensible regulations, guidelines, restrictions, and the like. We now have an opportunity to forge effective rules before things get out of hand. The position statement put out by the AAS is a positive step in that direction.