Glaciers and other icy landscapes are often named after the scientists who first set eyes on them. But it isn’t just human eyes spotting new features in Earth’s frozen wastes; many of these remote landforms are discovered and detailed via satellite. So, shouldn’t the robots get some credit, too?

University of Leeds glaciologist Anna Hogg thought so, which is why she requested that seven ice streams on the Antarctica Peninsula be named after the Earth-observing satellites that have helped her document them. On Friday, her university and the European Space Agency announced that the names had been formally approved by the UK Antarctic Place-names Committee. The names are expected to be internationally recognised, in what could be the start of a new trend for Antarctic glaciers.

“This is the first Earth-observation [satellite] range of glaciers,” Hogg said in a phone interview.

Hogg said she first became interested in Antarctic place names following a trip to the icy continent in the austral summer of 2013/2014, when she found a massive book of place names in a library at the British Antarctic Survey’s Rothera research base. She noticed that many landforms were named after the scientists who were the first to visit a region, while others were named after groups that funded expeditions. (Some of these names, like Mobile Oil bay, feel rather unfortunate in hindsight.)

In 2017, Hogg was finalising a paper detailing ice flow over Western Palmer Land, located in a region that she helpfully describes as “the armpit of the Antarctic Peninsula.” Using a suite of Earth-monitoring satellites, she was able to pinpoint a cluster of fast-flowing ice streams that didn’t have any names yet. And she recognised an opportunity, finally, to bestow geographic recognition on something other than a lone scientist or an oil company or a feeling of existential despair.

“I thought: I have been completely dependent on satellite data [in doing this research],” Hogg said. “Wouldn’t it be a great thing to name these glaciers, which are changing quite fast and are scientifically interesting, after the satellites that found them?” 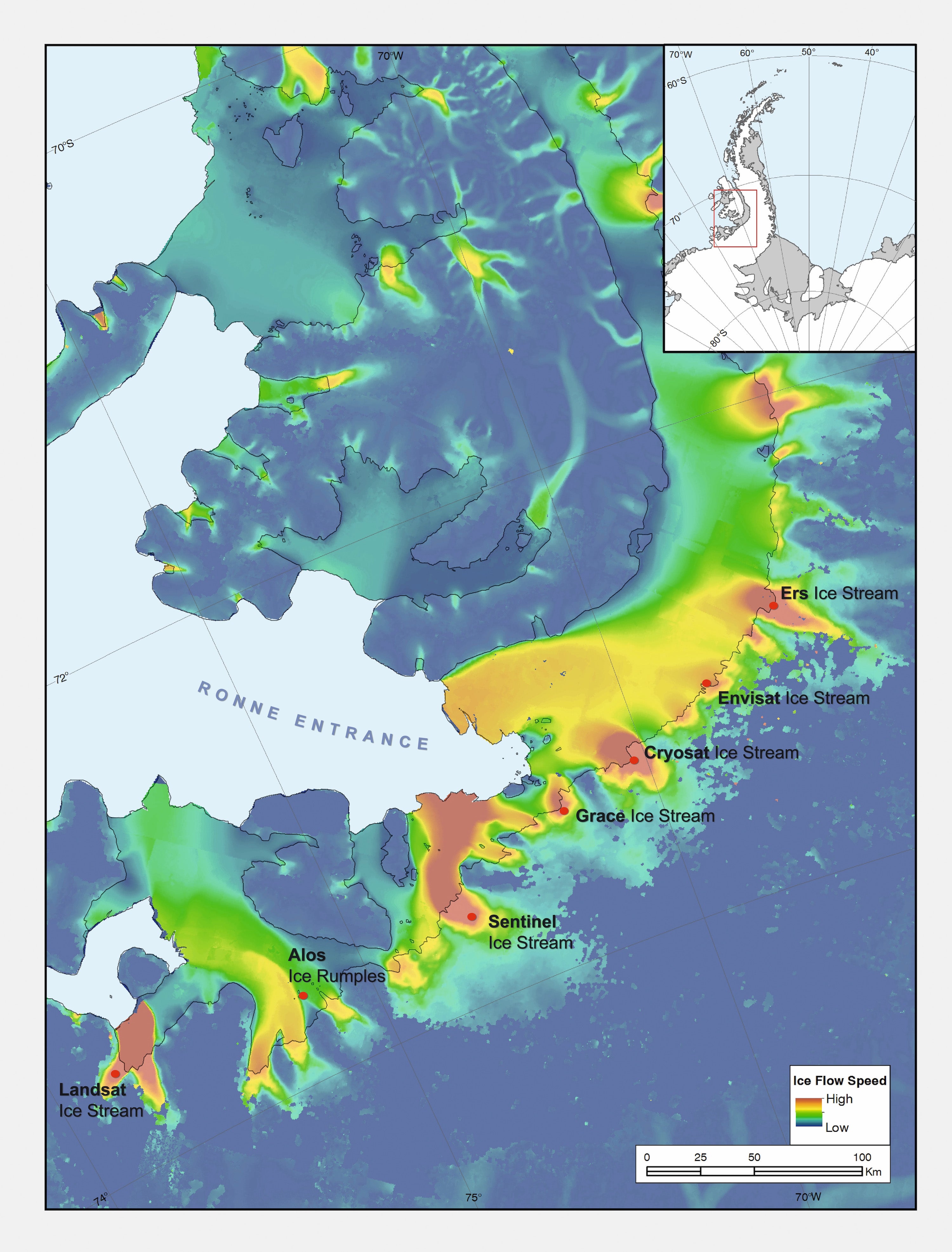 And so Hogg submitted a formal request to the Antarctic Place-names Committee that seven ice streams each be named after an Earth-monitoring satellite or group of satellites that had aided in their discovery. Last autumn, the committee notified her that the names—the Ers Ice Stream, the Envisat Ice Stream, the Cryosat Ice Stream, the Grace Ice Stream, the Sentinel Ice Steam, the ALOS Ice Rumples, and the Landsat ice stream—had been accepted and added to the British Antarctic Territory Gazetteer. The names were also submitted for inclusion to an international place names gazetteer maintained by the Scientific Committee on Antarctic Research.

Hogg said that thanks to the uniquely international nature of Antarctic stewardship (where land isn’t owned by individual countries but peacefully governed by the Antarctic Treaty), place names approved by one country’s committee tend to be honoured worldwide.

“This gesture of naming Antarctic glaciers after these ground-breaking satellites is a mark of recognition of the importance of Earth observation data in addressing the climate crisis,” Mark Drinkwater, the European Space Agency chair of the World Meteorological Organization’s Polar Space Task Group, said in a statement.

Hogg hopes that the names mark the start of a new trend. Satellites like NASA’s recently-launched ICESat-2 are constantly refining our understanding of Antarctica’s topography, helping us explore a recently unknown world of subglacial lakes and pinpoint the processes controlling the flow of ice from mountains to sea. The satellites are also, crucially, allowing researchers to determine just how quickly ice is melting as global temperatures rise, an issue that should matter to every Earthling.

“There’s so much we’re still learning about this remote and vast continent, there’s plenty more features to go around,” Hogg said. “Why shouldn’t they [the other satellites] get their own names, too?”