Scientists have shined a light on one of the creepier denizens of the deep sea, a pitch-black creature that can turn itself into a living lamp called the dragonfish. New research helps explain one of the dragonfish’s more disturbing qualities: its relatively gigantic and translucent teeth.

Deep-sea dragonfish, while rarely more than a half-foot long, are at the top of their food chain in their particular niche, much like sharks, bears, and other apex predators. Its superiority is in no small part thanks to a disproportionately huge jaw, which features sharp, fang-like teeth and allows it to swallow prey up to half its size. Dragonfish are also capable of bioluminescence, with the help of special organs along their body and in a protrusion from their bottom jaw called a barbel. This self-produced light, bluish in colour, is thought to attract both prey and potential mates.

Like so many animals from the deep sea, though, there’s very little we truly understand about dragonfish. One of these mysteries, according to senior study author Marc Meyers, is how and why their teeth are so transparent.

“We hypothesise that the teeth are transparent so that they are invisible to prey.”

Meyers, a Brazilian-born engineer at the University of California, San Diego, and his team often look to nature for inspiration in refining or creating new materials. Their latest study of the dragonfish, published Wednesday in Matter, was the result of a collaboration with scientists from the Scripps Institution of Oceanography, also based at UCSD, and the Leibniz Institute for New Materials in Germany. The team had earlier caught a species of dragonfish called the shiny loosejaw (Aristostomias scintillans) on an expedition, then had Leibniz researchers examine the teeth under an advanced electron microscope.

Much like our own teeth, they found, the dragonfish’s teeth are coated by a layer of enamel-like protein, with an inner layer of a bonier material called dentin. But the fish has evolved a unique way to keep its teeth invisible, even compared to other examples of translucent body parts in nature, such as the cornea of the eye. 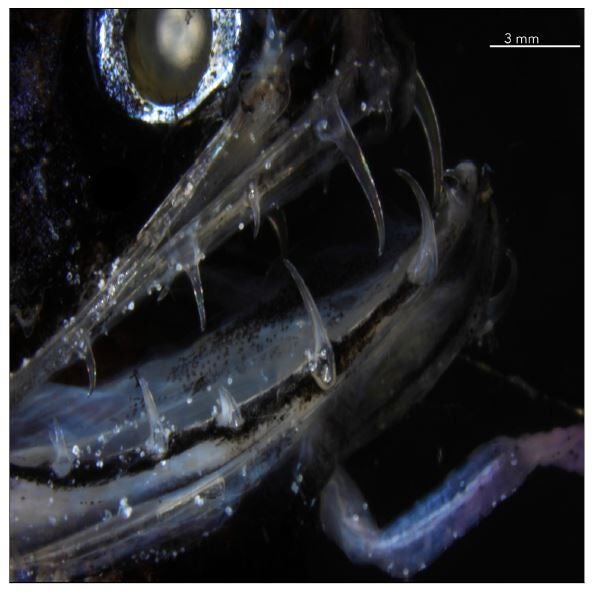 “These teeth—they have a nanoscale structure, meaning that hydroxyapatite nanocrystals are embedded in an amorphous matrix,” Meyers explained to Gizmodo by phone this week. “And when the features of most any material are very, very small, light doesn’t scatter or bump off—it just goes through it.”

Light scattering is what makes us perceive the sky as blue, for example. Sunlight interacts with air molecules, which leads to a higher scattering of short waves of light, which we see as blue. But in the case of the dragonfish’s teeth, the little ambient light passes right through, so unlucky prey don’t see the danger they’re swimming into.

“We feel it’s an adaptation, part of the evolutionary competition between predator and prey,” Meyers said. “In those depths, where there’s almost no light, the other fish are attracted to the [dragonfish’s] light, because they think it might be food. Then this one opens its mouth, and wham! So we hypothesise that the teeth are transparent so that they are invisible to prey.”

There’s plenty more work to be done to understand the lives of these bizarre fish, but Meyers is most interested in how humans can exploit the dragonfish’s tricks to make glass and other transparent materials.

“In the case of these fish, there are two features we would be really interested in replicating. One is its transparency, but two, [the teeth] might be tougher than other materials. And we plan to study that next,” Meyers said. “If we could develop a glass or ceramic that’s transparent and very tough the way these teeth are, that’d be a great application.”