It’s been over a year since Apple last teased the Mac Pro, a major refresh to its traditionally priciest and most powerful computer. And finally—finally! The successor to the “trashcan” is here and it looks a lot like a cheese grater (it also looks like it’s potentially very powerful).

Apple promised a major redesign to the last version of the Pro back in the spring of 2017. At that time the Mac Pro was already 4 years old, and while everyone could agree it was an attractive machine, everyone also agreed it was terrible for actual pros. Form trumped function leaving Apple with a pretty device that was a nightmare to upgrade. 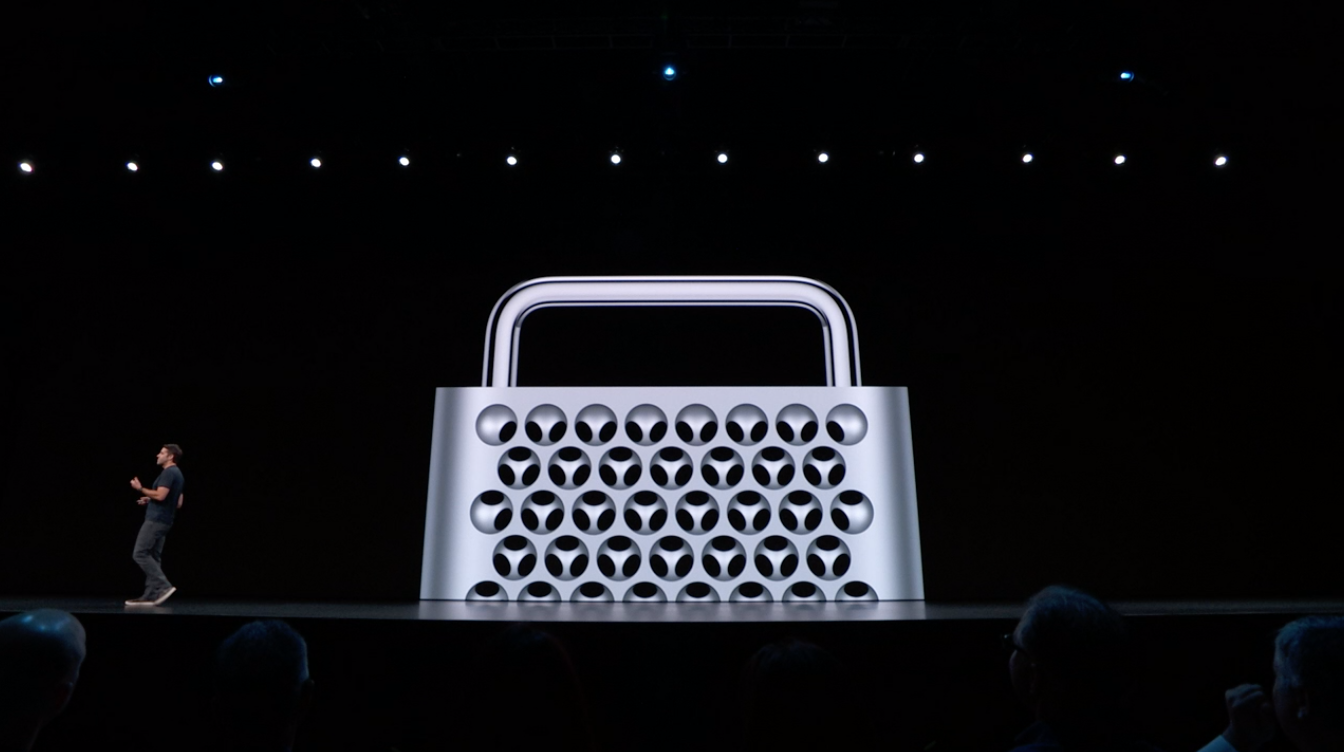 It’s been all but abandoned since it landed with a thud. Last week the version of it available on Apple’s site was still using a processor from 2015. And still, we all languished with only Apple’s furtive promises of a new and unique device. John Gruber was there when Apple first teased this new Mac Pro in 2017, and at the time quoted Phil Schiller, VP of Marketing at Apple as saying the following:

With regards to the Mac Pro, we are in the process of what we call “completely rethinking the Mac Pro”. We’re working on it. We have a team working hard on it right now, and we want to architect it so that we can keep it fresh with regular improvements, and we’re committed to making it our highest-end, high-throughput desktop system, designed for our demanding pro customers.

As part of doing a new Mac Pro — it is, by definition, a modular system — we will be doing a pro display as well. Now you won’t see any of those products this year; we’re in the process of that. We think it’s really important to create something great for our pro customers who want a Mac Pro modular system, and that’ll take longer than this year to do.

So what does a modular, “complete rethinking” of the Mac Pro look like? It looks like a cheese grater—even more so than the previous G5 version of the Mac Pro, which was lovingly called the “cheese grater” by fans.

It’s set into a stainless steel frame that gives you access to components from every single angle.

It uses the 8th-Gen Xeon processor announced back in January, which includes up to 28 cores. It can support up to 1.5TB of 2933MHz ECC RAM in 12 DIMM slots, and has 8 PCIe slots, two Thunderbolt 3 ports, two USB-A ports, two 10GB Ethernet ports, and a 3.5mm audio jack. 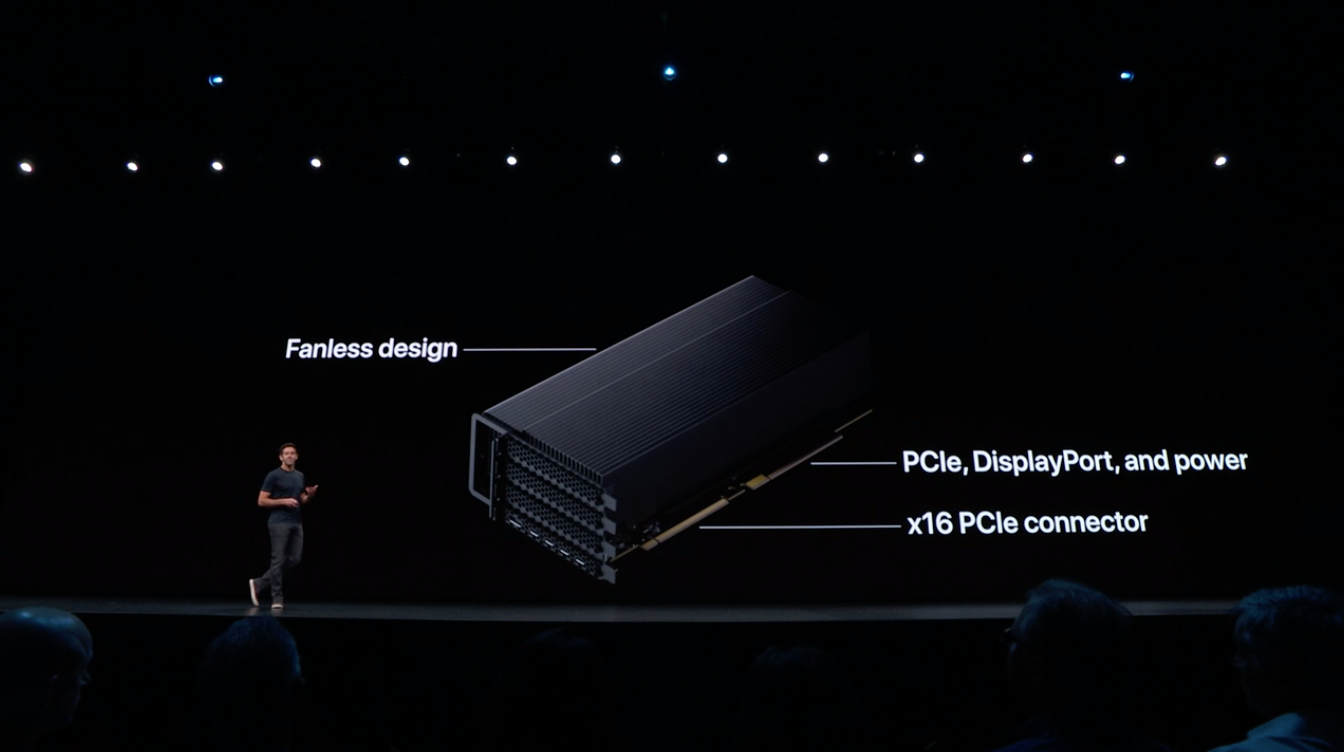 The GPU sucks up to 500 Watts of power and is called the MPX Module. The idea is that the GPUs are packaged by Apple, so they should be even faster than a similar card in a Windows device. According to Apple it lets you easily combine up to two AMD cards into a single module. Currently, it supports the Radeon Pro 580 and Pro Vega II, though presumably, Navi will get support too. Up to two MPX Modules can be slotted in, which means 4 graphics cards can run at once. Besides the GPUs, there’s a new “Afterburner” video decoder card as well. Apple claims it will allow you to process up to 3 8K streams at once.

And how is all this nonsense powered? By a whopping 14,000 Watt power supply. Which is. Ridiculous.

As for how you’ll view all the content Apple claims this cheese grater can crush? Via a new more affordable monitor meant to provide the quality of a £40,000 reference monitor called the Pro Display XDR. 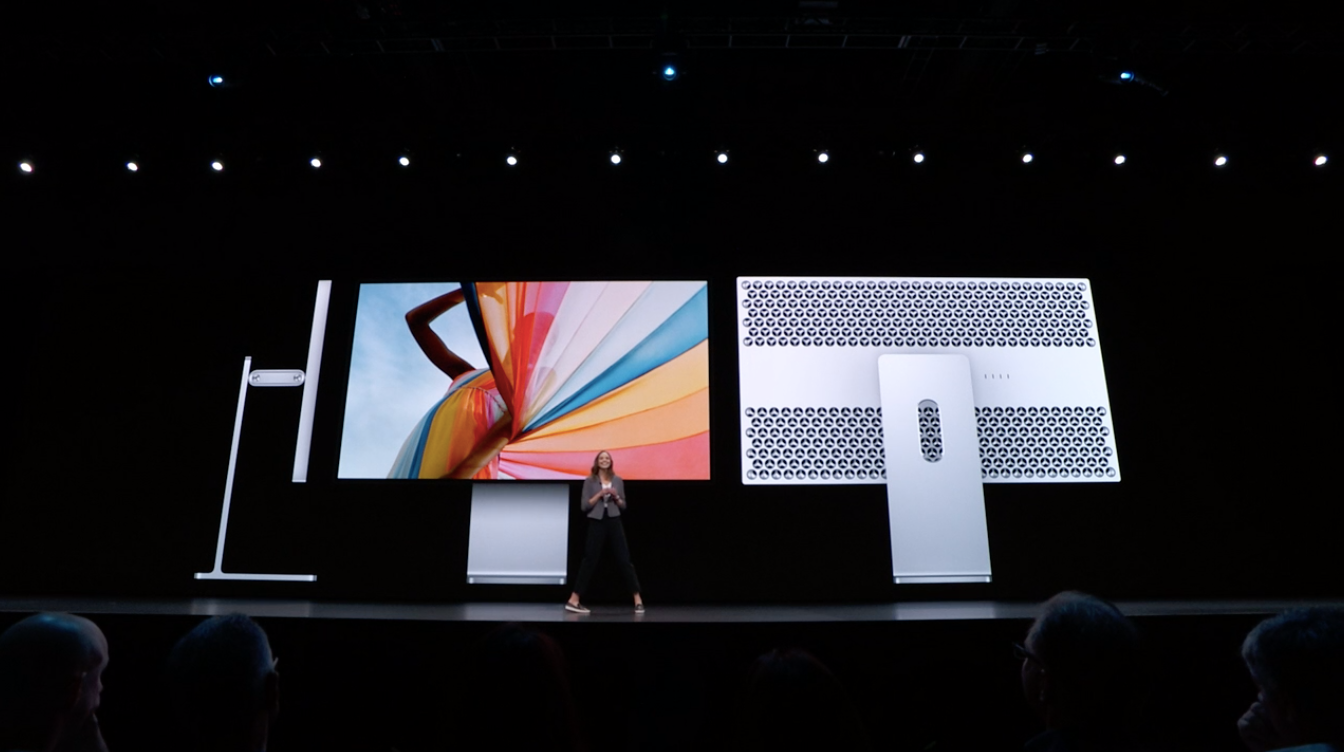 It’s a 32-inch 6016 by 3384 6K retina display with the option for either a glossy or matte glass cover. It’s a full LED-backlit display that can maintain 1,000 nits of full brightness indefinitely with 1,600 nits of peak brightness, and as with the Pro, it has a nice cheese grater back.

But boy this cool display and computer aren’t going to be cheap. UK pricing has yet to be announced, but in the US the Pro Display XDR will start at $5,000 (£3,946) and the cheapest Mac Pro, with an 8-core Xeon processor, AMD Radeon Pro 580, 16GB of RAM and a pitiful 256GB SSD will start at $6,000 (£4,736). This is definitely not a prosumer product, but one Apple intends for big editing bays in professional studios.