When most of us think of the original Men in Black, it’s not that significant. It’s a blip on the blockbuster scale. A film that used Will Smith at his prime, had a hit pop song in its credits, and spawned a few sequels. Watching it now though—over 20 years since its 1997 release, on the eve of a franchise reboot—and you come to appreciate the film in ways you never thought possible.

Take this, for example: Men in Black is a comic book movie, but not just any comic book movie. It’s based on a 1990 comic book series by Lowell Cunningham, which was published by a company (Aircel) that was absorbed by another company (Malibu) that was absorbed by...Marvel. It’s right there in the film’s opening credits. Men in Black is a Marvel Comics movie, a brand that, a few decades later, would redefine what blockbuster filmmaking could be.

Men in Black is also, and this is much easier to believe, an Amblin movie. When we think of Amblin movies, we think of films like E.T., Back to the Future, The Goonies, or the Indiana Jones series. No one thinks of Men in Black, and yet, all the elements are there. The heart, the big ideas, the family-friendly premise. Everything. So, if you think of it in very broad strokes, Men in Black is a Steven Spielberg-produced Marvel comic book movie. Talk about a nice mix. 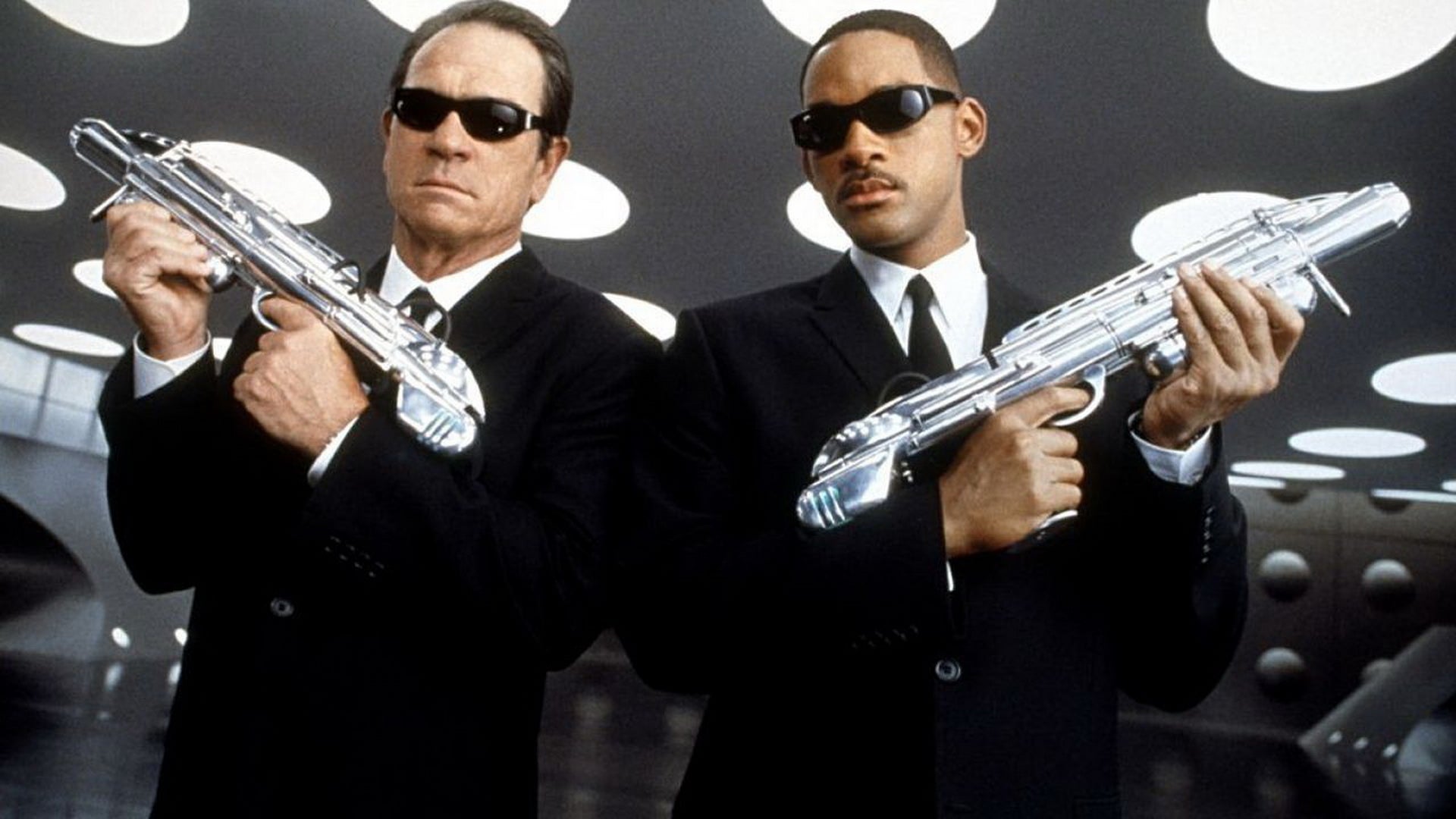 This article has lots of photos with dudes in sunglasses with guns. Be forewarned. (Photo: Sony Pictures)

Men in Black is also short. It’s about 98 minutes with credits, which is just over half the length of the most recent Marvel movie, Avengers: Endgame. Imagine how much money Endgame would have made if cinemas could have played it twice as many times in a day? Most big blockbusters these days are over two hours, or at least close to that. The big-budget studio film pushing 90 minutes is an endangered species.

All of this is a testament to just how well Men in Black still works. The script, by Ed Solomon, co-creator of Bill & Ted, is a Swiss watch of economical storytelling. Each scene forwards the narrative in a very crucial way, while also informing the audience about the character in the scene. At the same time, it quickly and authoritatively builds an awesome, expansive world. A world where, if you remember, aliens live among us and a small, elite organisation called the Men in Black operate in secret to watch over them, and us.

Then there’s the direction by Barry Sonnenfeld. The world he and his team create, both visually and tonally, beautifully blends the familiar and the strange in a way that’s wholly unique. You think you know what an illegal alien is, but you haven’t seen anything until you’ve seen an actual alien pretending to be one. You knew George Lucas and Sylvester Stallone were weird, but you didn’t think they could be otherworldly weird. And the choice to have the main characters—Agents J and K, played by Will Smith and Tommy Lee Jones—dress in the most basic of black suits, holding some of the coolest gadgets and guns every created, represents that dichotomy perfectly. It’s a world you recognise, just with some insane sci-fi sprinkles on top. 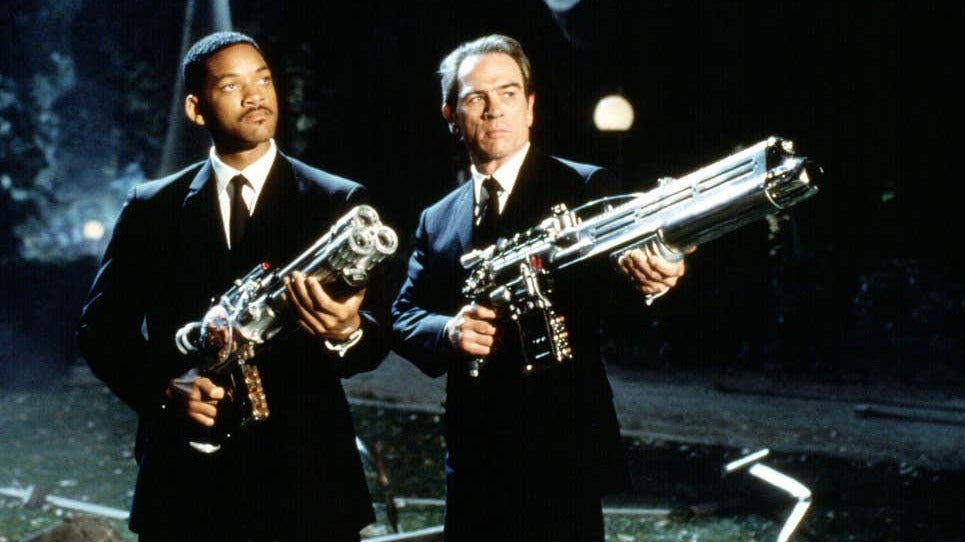 I warned you about the photos, didn’t I? (Photo: Sony)

As for the actors, obviously, you expect Smith to be cool. He’s Will Smith. That’s what he does and continues to do. But you may have forgotten just how much cooler Jones is in the film. If Smith is the other side of the pillow, Jones is a freezer. His performance isn’t just suave and confident, it borders on shocking how aloof his demeanour can be. It’s incredibly fun to watch.

Then there are the supporting performances by the likes of Rip Torn and Vincent D’Onofrio, who are each great—as is Linda Fiorentino. Unfortunately, watching Men in Black today, you really feel how shortchanged the one female character in the film is, which is a shame, especially since she never got to come back for the sequels.

Another huge issue with the film today is its visual effects. Men in Black came out just as digital effects were starting to rise to prominence and here they look very, very dated in almost every single shot. They almost feel like you could pause the movie, stick your hand onto the screen, and pull them off like a sticker. It’s that bad. On the other hand, that’s also because the film uses those effects so ambitiously. Men in Black uses full, CG characters years before Star Wars Episode I: The Phantom Menace or The Lord of the Rings did (though they were created differently). So although the effects date the film poorly, it’s also a little bit charming, since everything else in the movie works so well. 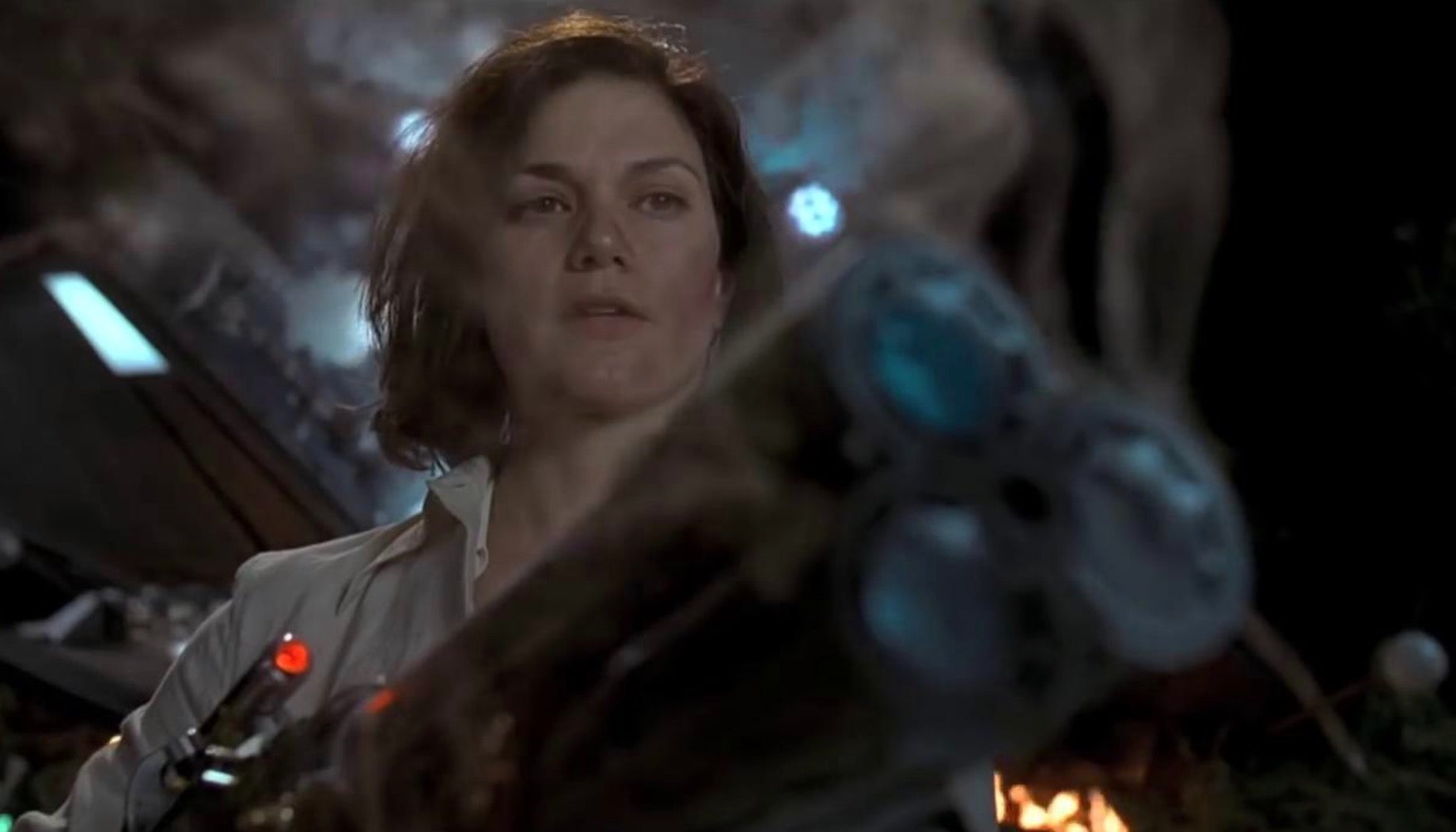 Of course, I had to include one image of a woman (Linda Fiorentino) with a giant gun too, though it’s the only scene where she gets to hold one. (Photo: Sony Pictures)

Put all of that together and 1997's Men in Black today looks, in 2019, like the Missing Link of Hollywood blockbusters. A film that bridges the gap between the old and the new. It blends the legendary Amblin tone of the ‘80s with the soon-to-be-prevalent digital effects of the 2000s, under the umbrella of a comic book adaptation that would spawn a larger franchise, which is the kind of thing movie studios dream of. It has it all, minus any well-developed female characters, of course. But oddly, that too places it squarely in the cultural time and space it was released: a time of transition, a time of shorter blockbusters, and a time before a slowly rising social change became apparent in Hollywood. And all of it adds up to a nice slice of blockbuster history.