This Freaky Robotic Fish Is Powered by ‘Blood’

In an effort to create more autonomous, life-like robots, scientists have developed a soft robotic lionfish with a multi-functional circulatory system. A blood-like compound powers the bot and provides propulsion.

Typically, robots are equipped with single-purpose elements, like a battery to store energy or gears to transmit power from one component to another. Animals, by contrast, are composed of parts that are extremely multifunctional. Take the fish gill, for example, which enables underwater gas exchange, maintains body fluid pressure, regulates the acid-base balance, and discharges waste. Robots, it’s fair to say, are still incredibly basic when compared to animals.

Indeed, the problem with single-purpose elements is that they add to the size and bulk of a robot, which in turn contributes to a lack of dexterity, flexibility, and autonomy. New research published this week in Nature describes an innovative effort to make robots more animal-like by endowing them with dual-purpose components. In this case, researchers from Cornell University and the University of Pennsylvania developed a soft robotic fish whose unique circulatory system provides both its power and its means of propulsion.

Using its synthetic blood as a hydraulic fluid, the soft robotic lionfish was able to move its pectoral fins and swim against a current in the water. At the same time, the ‘blood’ (an electrolyte solution) stored the energy required to power the fish. Looking ahead, this robotic fish could inspire researchers to create robots with greater physical autonomy and energy storage efficiency.

James Pikul, a co-author of the study and a researcher at the University of Pennsylvania’s Department of Mechanical Engineering and Applied Mechanics, said his team came up with the idea while trying to find new ways of making robots more independent.

“We realised that the operation time of most robots is very short before they have to recharge, on the order of tens of minutes, yet humans can operate for days without eating,” Pikul told Gizmodo in an email. “We wanted to solve this problem by finding ways to store energy in all the components of a robot. This robot blood is our first demonstration of storing energy in a fluid that is normally only used for actuation.”

Robot lionfish moving against a current.

Nothing quite like this has ever been done before. It’s the first experiment to combine hydraulic force transmission, actuation, and energy storage into a single, multifunctional system in a robot, according to the team. It’s also the first to show how a fluid battery (specifically, a redox flow battery, which stores energy in a liquid electrolyte solution) can improve the performance of a robot, despite having less efficiency than a solid battery. Liquid batteries have been used before, such as large scale batteries connected to electrical grids, and hydraulic fluids have previously been used to propel robots. But this is the first time a liquid has been used to perform both functions in a single robot.

Pikul said the new system is similar to an animal’s vascular system in that it consists of a fluid that stores chemicals, pumped throughout the body.

“In our synthetic vascular system, the fluid stores chemical energy which we can use to power the fish robot,” he said. “As the fluid is pumped through the fish robot, the moving fluid also causes the robot to move. The vascular system, therefore, is multifunctional. It is these multiple functions that allow the robot to maintain its dexterity while also having a long operational time.”

In tests, the robotic fish was able to swim for long durations, with maximum stints exceeding 36 hours. Swimming against a current, the fish was able to move at a rate of 1.5 body lengths per minute. Compared to a robot of similar design but without the synthetic blood, the robotic fish worked for about eight times longer, and without having to sacrifice dexterity. The robot was also able to “fan its pectoral fins, a behaviour that lionfish use to communicate,” noted the authors in the paper. 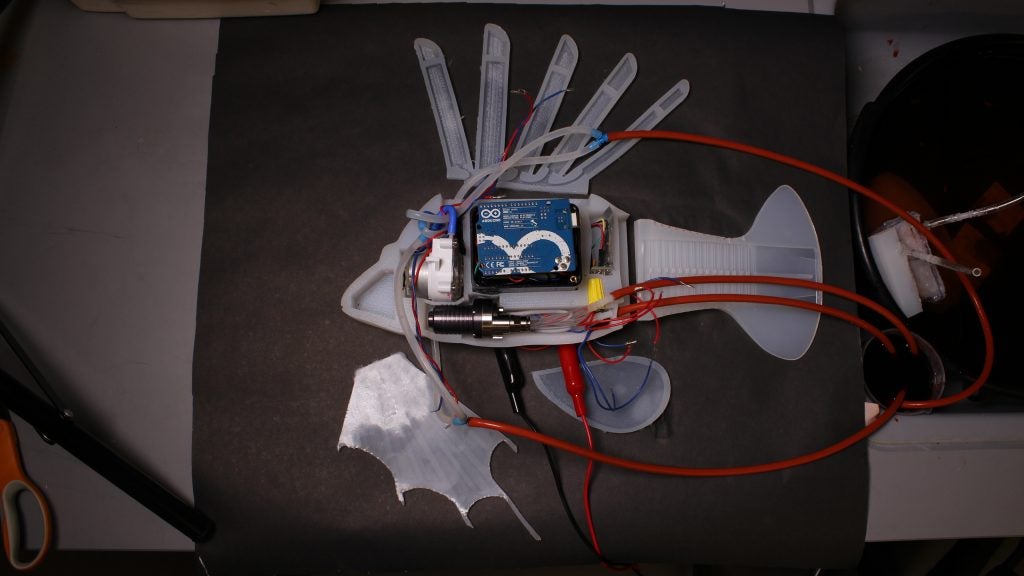 Looking ahead, Pikul said his team would like to use the synthetic blood to boost the power of robots and machines that require fluids, which includes electric vehicles, aeroplanes, and other soft robots. And as the team integrates more complex chemistry into the fluids, they’d like to increasingly add functionality to the robots.

This fascinating new experiment is yet another sign of how robots are becoming increasingly animal-like in both form and function. Once clunky, stiff, and simple, robots are now becoming agile, soft, and sophisticated. Eventually, it’ll be hard to tell the difference between robots and animals. What happens after that is anyone’s guess.