Harvard’s robotic flying bee has been in development for well over a decade now. And despite its incredibly simple design, over the past few years, its creators have improved Robobee’s capabilities, adding abilities such as the ability to hover and even steer itself down a pre-determined flight path. It’s too tiny to carry its own batteries and has been long reliant on a connected power cable. But last August, for the first time ever, Robobee made its first flight without a wire tether.

It wasn’t necessarily the most spectacular flight, however. Instead of soaring across the laboratory, buzzing past researcher’s ears, Robobee lifted off for a mere second under its own power before falling out of the sky—saved from a crash landing by an emergency kevlar safety wire. To achieve this feat, RoboBee received a couple of key hardware upgrades last year, including the addition of two extra wings, bringing the total to four, which contributed to a 38 per cent boost in lifting power. It also got the smallest set of solar cells you can buy, weighing in at just 10 milligrams. 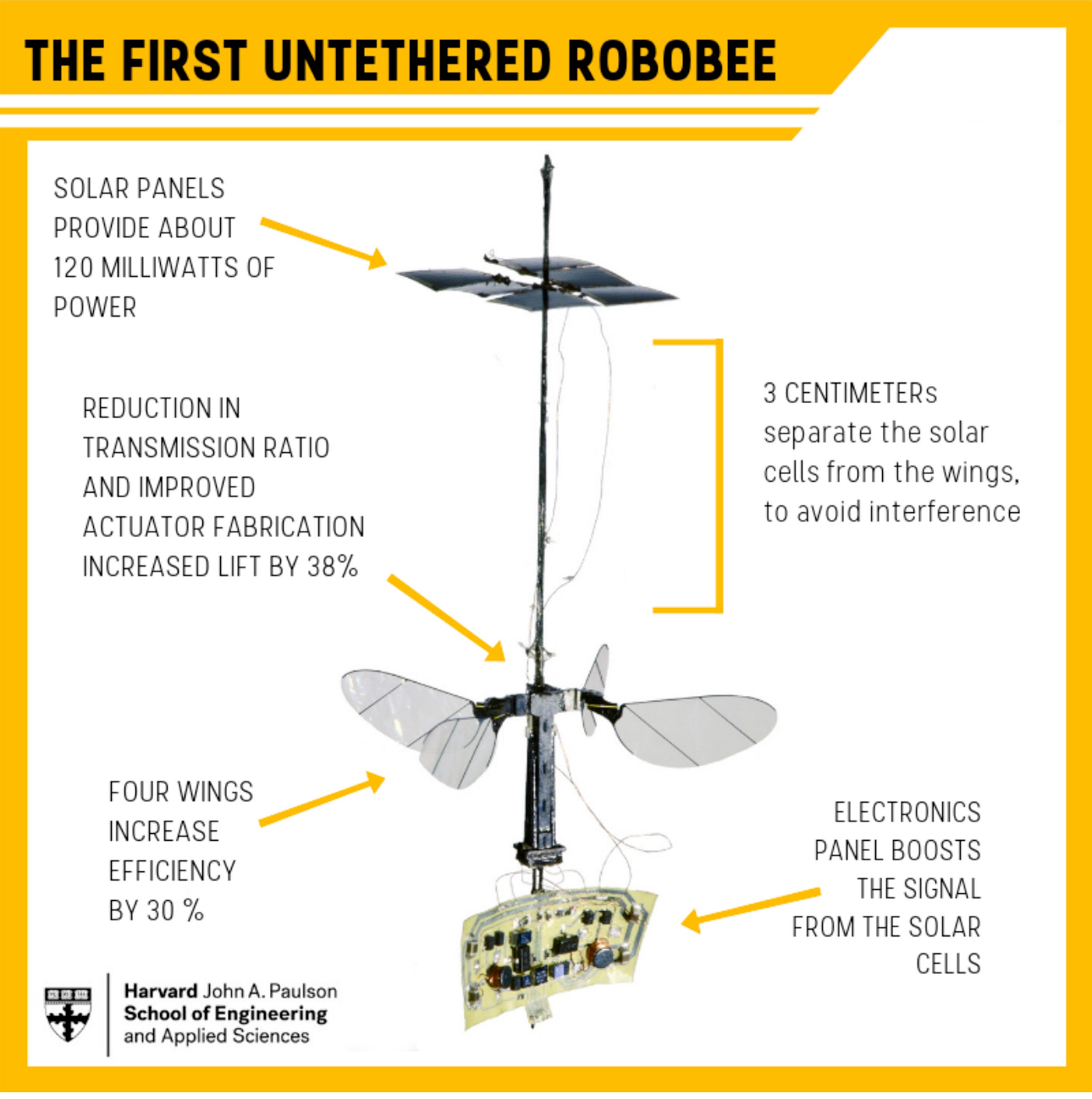 Even with those upgrades, the upgraded Robobee X-Wing, as the researchers call it, weigh a mere 259 milligrams. (For comparison, a regular sized paper clip is about four times as heavy.) Its incredibly light structure is what allows the robotic insect to fly without the need for onboard batteries, which would add a considerable and problematic amount of weight.

To eliminate the power cord, the added solar cells generate about 120 milliwatts of electricity, which the researchers point out is less than what’s needed to light a single LED on a string of Christmas lights. But that’s all that’s needed to power Robobee’s actuators and flapping wings—at least briefly. To achieve sustained flight, the Robobee X-Wing would require a sun that’s three times as bright, which the researchers simulated in the laboratory using a set of intensely bright halogen lights.

Researchers have done a good job at creating robotic versions of animals like dogs, cheetahs, and even load-hauling mules. But this ongoing research proves just how challenging it is to recreate the smallest creatures on Earth. It will be quite a few years before Harvard’s Robobee is able to fly around a controlled laboratory setting all by itself, and even longer before it tackles the uncertainty of the outside world where even the tiniest of breezes can throw it off course. But with this recent accomplishment, it’s hard to imagine a future where smacking a mosquito buzzing around your ear doesn’t come with the risk of destroying an incredibly expensive micro drone trying to spy on you.