Woodstock ‘Took on a Life of its Own,’ Recent Archaeological Survey Reveals

The 50th anniversary of the Woodstock music festival is fast approaching, and though the iconic cultural event still resides within living memory, the site is now the subject of archaeological inquiry. As new research shows, Woodstock was more even more chaotic and spontaneous than we imagined.

From 15 to 18 August 1969, over 400,000 people descended upon a 600-acre dairy farm near White Lake in Bethel, in the US state of New York, to celebrate “3 days of peace & music.” The music and art festival—though no one could have predicted this in advance—turned out to be a hugely important cultural event, one that defined an entire generation.

Five decades later, the site has undergone some changes. The field that once held hundreds of thousands of scantily clad, mud-soaked spectators is now a verdant meadow intersected by old wooden fences and a car park. Some spots have been overtaken by thick vegetation and trees, obscuring important landmarks. The Woodstock site became a protected area in 2017 when it was added to America's National Register of Historic Places, but with nature taking its course, the site is beginning to show the passage of time—and by consequence, is attracting the interest of conservationists and archaeologists. Aerial view of the Woodstock site as seen in 2012. The Bindy Bazaar is outlined in red. (Image: Heritage Landscape/Bethel Woods Center for the Arts)

In preparation for the 50th anniversary of the festival, a research team from Binghamton University, the Museum at Bethel Woods, and Bethel Woods Center for the Arts conducted a series of ground surveys at the site. This work was important from an anthropological and historical perspective, but it also served a practical purpose—namely the groundwork required for the construction of an interpretive trail system through the site, including accurate signage. The recent investigation was an effort to document and pinpoint key cultural features of the festival.

Last year, for example, the team found the exact location of the stage. Standing on this spot would send shivers down the spine of any music fan. Thirty-two acts performed on this stage during the festival, including Joan Baez, Janis Joplin, The Who, Jefferson Airplane, and Jimi Hendrix. 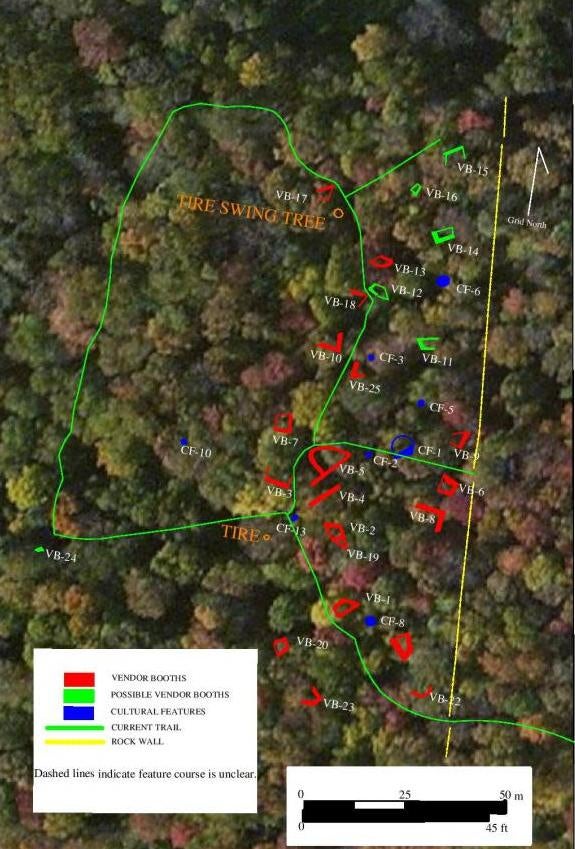 New map showing the locations of vendor booths and other culturally significant areas of the Bindy Bazaar. (Image: Maria O’Donovan)

The researchers also explored an area that hosted Woodstock’s Bindy Bazaar. In the words of Maria O’Donovan, the project director and an archaeologist at Binghamton University, the Bindy Bazaar was “a meeting place where transactions—which included trading and bartering, in addition to selling—and cultural interactions took place.” For O’Donovan, it exemplified “the informal, free-wheeling spirit of the counterculture,” she said in a press release.

Given the importance of this meeting place, the archaeologists and conservationists “set out to bring the Bindy Bazaar back into its former glory,” said Julia Fell, the assistant curator at Bethel Woods Center.

Equipped with an original 1969 map and some archival photos of the festival, the researchers sifted through a now-forested region where the Bindy Bazaar once stood. In all, the location of 24 vendor booths and 13 other culturally significant features were uncovered. Interestingly, however, the booths were arranged in a discernibly ad hoc manner—one inconsistent with the maps.

“Our research demonstrated that the reality of what occurred at Woodstock was not captured by the preliminary plans,” said O’Donovan. “Archaeologists located 24 potential vendor booths concentrated on one side of the Bindy Bazaar area and not distributed as on the 1969 plans. This is more evidence that the festival took on a life of its own that organisers could not control.”

The team located the vendor booths by uncovering stacked stones and other features consistent with human, and not natural, activity. The researchers also documented evidence of more recent use of the area, which was linked to later anniversary events and other uses of the site prior to its acquisition by Bethel Woods.

A music festival to commemorate the 50th anniversary of Woodstock is tentatively planned for 16 to 18 August, but the event is in a state of limbo right now because there’s no venue locked down. The festival was supposed to take place at Watkins Glen International, but the racetrack reportedly backed out.

On a happier note, the Museum at Bethel Woods opened its interpretative trails in early May. You might have better luck—and a better time—visiting the old Woodstock site, anyway. Commemorative Woodstock festivals haven’t really been able to capture the spirit of the original. Yes, Woodstock 1999, we’re thinking of you.