All the News and Key Details From Google Stadia Chief's AMA

Google’s big play at making game streaming a reality—Stadia—is slated to go live sometime in November. That’s less than four months away, so to help answers questions and provide more info about Google’s upcoming game streaming platform, Stadia’s director of product Andey Doronichev hosted an AMA (Ask Me Anything) over on the Stadia subreddit.

We covered a lot of these questions when we interviewed Doronichev back in June, but it’s heartening to see that many of these things haven’t suddenly changed since then. AMA questions ranged from basic stuff like how many free games Stadia Pro users will get for their subscription fee to “Is a hot dog a sandwich?” So here’s all the new info we’ve been able to glean from Stadia’s recent AMA.

What’s the difference between Stadia Pro and Stadia Base?

On the topic of free games, Doronichev clarified that a Stadia Pro subscription is not a “Netflix of games” where users would get unlimited access to every title on the service. Instead, Doronichev described a Stadia Pro subscription as something closer to Xbox Live Gold or PlayStation Plus that comes with access to a pool of free games along with features like support for 4K/HDR streaming, 5.1 sounds, and elusive discounts. 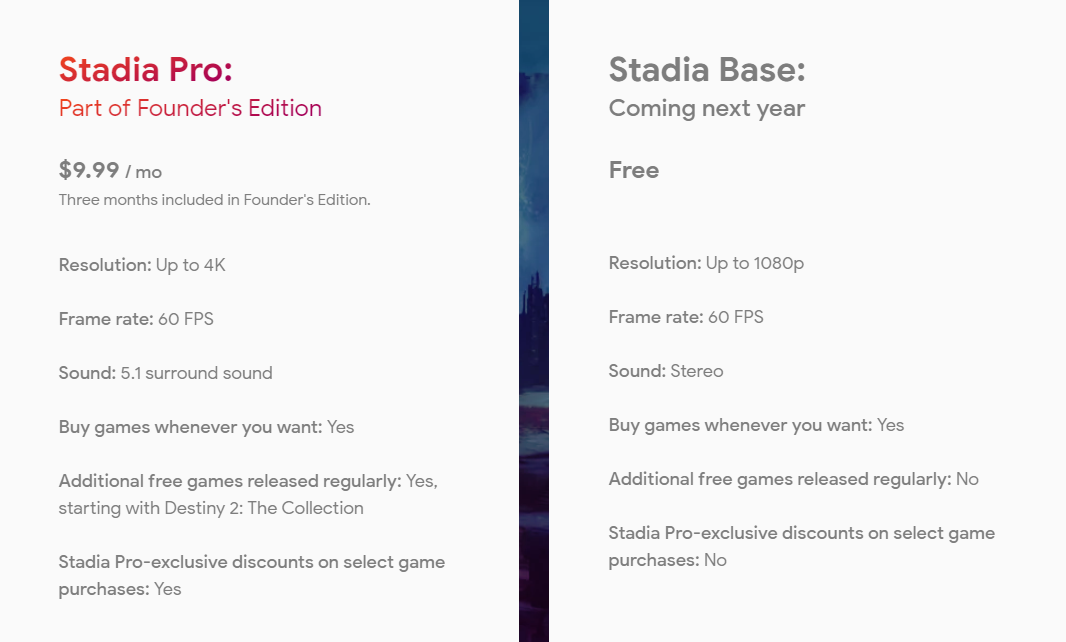 At launch, Stadia’s first free game for Pro users will be Destiny 2, with Google saying that the pool of free games will grow overtime at the rate of about one game per month. That means after a year, there should be around 12 free games for Stadia Pro subscribers to play. However, if you cancel your Pro sub and revert back to Stadia’s free Base tier, you’ll lose access to those games until you re-subscribe.

Meanwhile, Stadia Base (Google’s free service tier) will function similar to Steam, where users will be able to buy games individually, and instead of downloading and installing those games to a home PC, Stadia games will simply be hosted in the cloud and then streamed to a local device. For the Base tier, users will be limited to 1080P/60FPS resolutions and stereo sound.

What about free to play games like Fornite, Warframe, etc.?

Unfortunately, this is one of the big questions Doronichev didn’t get to, as there are a large number of free-to-play games like Fornite that seem like they might be a good fit for Stadia. Currently, it’s not clear if you’ll need a Stadia Pro subscription to play free-to-play games, though I suspect that won’t be a requirement. I wouldn’t be surprised if free-to-play games will be available to both Pro and Base users for free, while Google makes money off those titles by taking a cut of microtransactions purchased via their in-game stores.

What features will be available at launch?

At launch in November (which will only be for Stadia Pro subscribers, the free Base tier won’t be available until sometime in early 2020), Doronichev said Stadia will include all of the service’s basic functionality like the ability to play across multiple devices, no need to install games or patches manually, built-in social features (making parties, managing your friends list, using voice chat) and of course, Stadia’s game store. Doronichev said Google is also working on some sort of achievement system, though it won’t be ready at launch.

Down the line, Google is looking to expand Stadia’s list of compatible devices to more phones (only Pixel phones will be supported initially) and streaming boxes like the Nvidia Shield. When asked about a potential partnership with Steam, Doronichev would only say that Google is “always evaluating our options to make Stadia a better place for the gamers.” 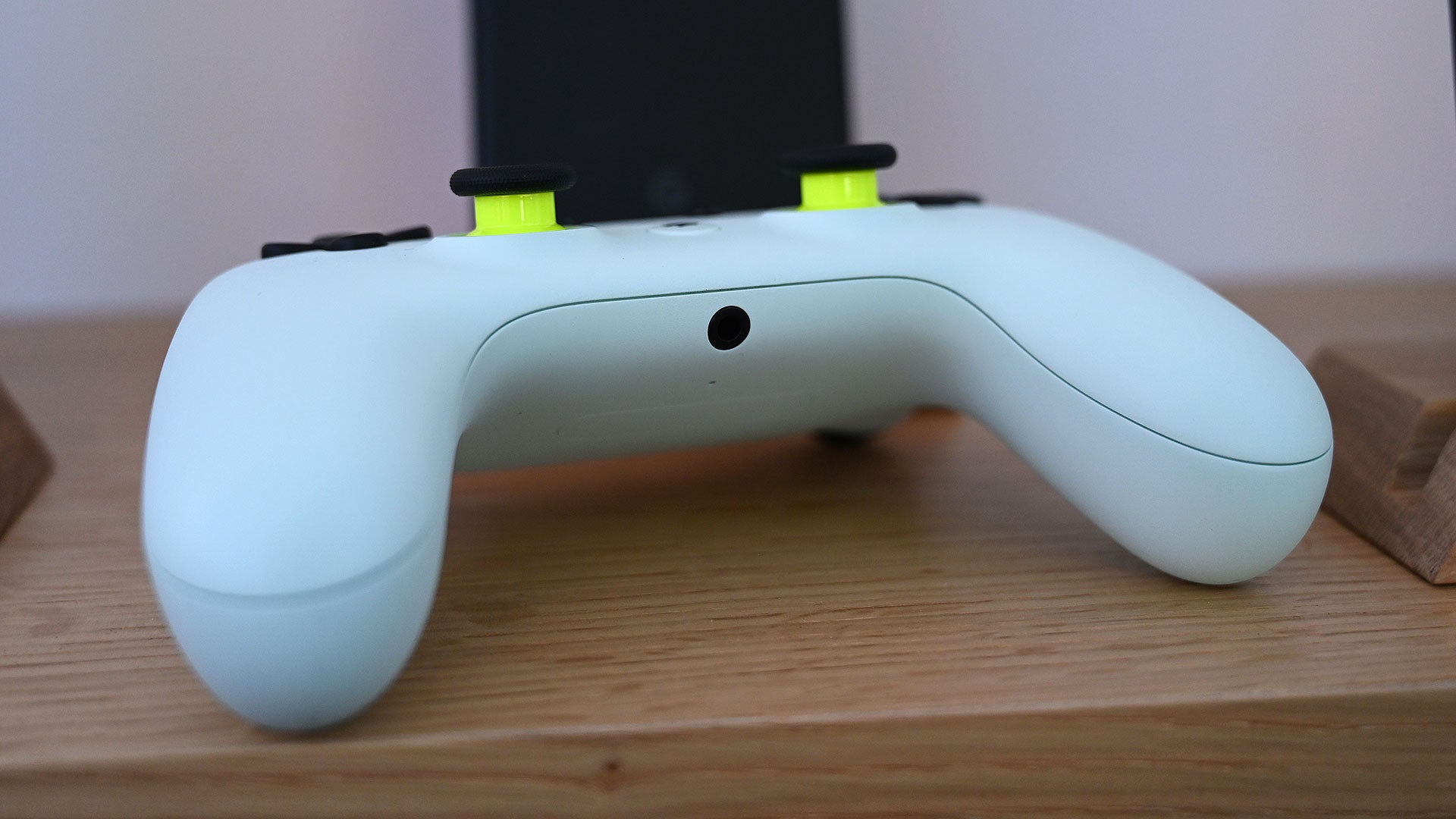 That sort of depends on what device you use for Stadia. If you’re streaming Stadia using a Chromecast Ultra connected to a Stadia controller, you’ll have to use wired headphones. That’s because while the Stadia controller does have built-in Bluetooth, support for wireless audio won’t be available at launch. Presumably, Google will add support for Bluetooth headphones and headsets in the future.

However, if you’re streaming Stadia on a laptop or phone (which only works over WiFi, not 4G), you will be able to connect Bluetooth headsets if you want.

How will Stadia Founders pick their handles?

One of Google’s incentives to get people to buy into the Stadia Founder’s Edition is the ability to choose your Stadia username before regular folk. So to make this happen, Stadia will send out an email “a bit before” the Founder’s Edition arrives asking users to reserve a username, with the first emails going out based on when pre-orders were purchased.

What happens to your games if Stadia goes under?

Obviously, Google would prefer if this never happened, and Doronichev said Google is “super committed” to making Stadia successful. But in the event of a Stadia shutdown Doronichev said “The games you buy on Stadia are yours to play” and that Stadia will support Google’s Takeout feature so users can download game saves, metadata, and more.

However, it’s not clear what will happen to the games themselves and if you’ll still be able to play them in the cloud if Stadia gets shuttered.

So is a hot dog a sandwich?

While I strongly disagree with this, Doronichev said “Hot Dog is definitely not a sandwich….it’s so much more,” before countering with a question of his own: “Is breakfast cereal a soup?”

So that’s pretty much it for now, but stay tuned for another Stadia Connect as Doronichev said the next Connect will happen “Sooner than you think…”