At Snowpiercer's SDCC Panel, All Anyone Could Talk About Was the Cows

The Snowpiercer TV show debuted its first trailer at its San Diego Comic-Con panel, along with an extended scene giving us a look at what’s to come. The action was impressive, making the audience feel just as jostled and terrified as the folks on the train. But the real victims were the cows—and after the scene was over, the panel seemed to transform into a memorial service. RIP cows.

The series, based on the same French graphic novel by Jacques Lob, Benjamin Legrand and Jean-Marc Rochette that inspired Bong Joon-ho’s 2013 film adaptation, takes place seven years after humankind tried and failed to prevent climate change, inadvertently creating a new Ice Age. Thousands of passengers, including star Jennifer Connelly as train announcer Melanie Cavill, now inhabit a 1,0001-car train that permanently encircles the globe to avoid freezing. But as we saw in a clip at the panel, nature still has a way of butting in...even if they’re always moving.

The scene, from episode two, centred around an avalanche on a collision course with the train. Since it came so suddenly, the passengers had little time to brace before several of the cars were thrown into chaos by the impact. One of the cars, holding some of the train’s cows, got a window crack from a flying cattle gun, which quickly spread and exploded. All the crew members and cows quickly succumbed to frostbite, with the cows falling limp and their eyes glazing over. It hit the audience hard...but possibly not as hard as the cast.

“These guys hadn’t seen that [scene] before,” showrunner Graeme Manson said, gesturing to the cast.

“I mean those cows, man, with their little eyes. They’re so sad. It was so cool when I was just gonna eat them, but freezing to death? That’s just fucked, man,” Diggs added. “Reconsidering all my choices now, I’m a vegetarian now. By necessity.” 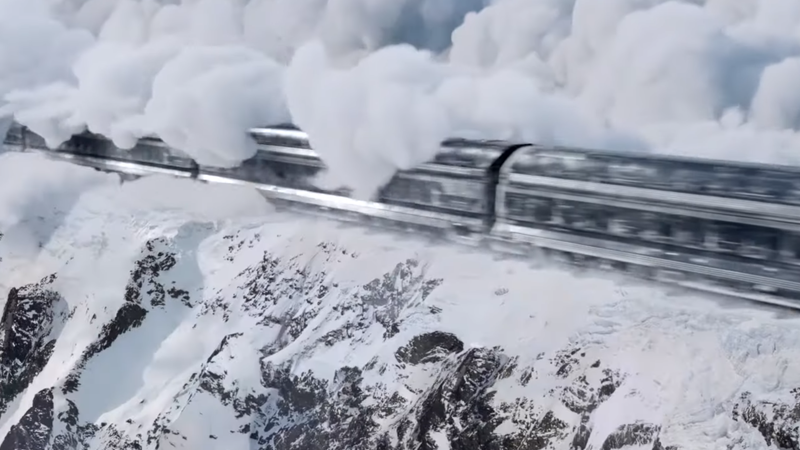 It wasn’t just the cows that left an impression. The scene was powerful and action-packed, with the train cars and cameras doing equal work to bring the audience into the intensity of the situation. During the panel, Manson talked about the challenge of creating sets that could properly convey the movement and claustrophobia of being on a giant train you seemingly can’t disembark. They built several different cars that could be connected to each other for larger sequences, which made a huge difference when needing to do action scenes.

“Our sets are really quite amazing. We could link five train cars up together and you could walk all the way down,” Manson said. “The train cars are all jostling because there are two big grips shaking the cars... and they could actually bend the tail too, like some guy’s on a forklift pushing it this way and that way,” he added.

“It’s kind of the most incredible bit of movie magic. When you’re inside of the train, it’s the most real feeling, like, intense thing ever. And then cut, and you walk outside and it’s just, like, four huge dudes on a seesaw,” Diggs added.

Snowpiercer is “coming soon” to Netflix, and has already been guaranteed for a minimum two seasons.