When a gunman opened fire at the Gilroy Garlic Festival in the US state of California on Sunday evening, killing at least three people, including a 6-year-old boy, and wounding 12 others, Dilbert creator Scott Adams apparently saw a juicy marketing opportunity for his blockchain app.

Adams is best known for creating Dilbert, a comic strip satirising soulless corporate culture and the gruelling punishment dished out on its eponymous engineer by idiot co-workers and clueless management. But he also moonlights. In addition to punditry on topics ranging from fifth-dimensional chess analyses proclaiming Donald Trump a genius Pavlovian manipulator to tortured theological treatises, to questioning the specifics of the Holocaust’s atrocities, Adams is the co-founder of app company WhenHub. WhenHub is similar to Cameo, the app that allows everyday people to pay celebrities to create customised videos, except instead of pre-recorded messages from movie stars and rappers, it offers live chats with a range of subject-matter experts.

(It’s also on the blockchain for some reason that definitely is not just capitalising on the initial coin offering craze, a loosely regulated funding model in which investors receive digital “tokens” instead of equity.)

Adams seems to have concluded the Gilroy Garlic Festival shooting was an ideal time to direct-market this app to witnesses—who, as he made quite clear on Twitter, he believed could cash in on their traumatic experience by selling interviews to news organisations via WhenHub.

According to the Los Angeles Times, the gunman opened fire sometime around 5:30 pm local time on Sunday when the festival was nearing its conclusion. Less than three hours later, at 8:21 pm, about 13 minutes after President Trump advised locals to exercise caution because reports indicated the shooter was still at large, Adams began pitching the survivors on signing up for, and charging for, interviews with media outlets via WhenHub. 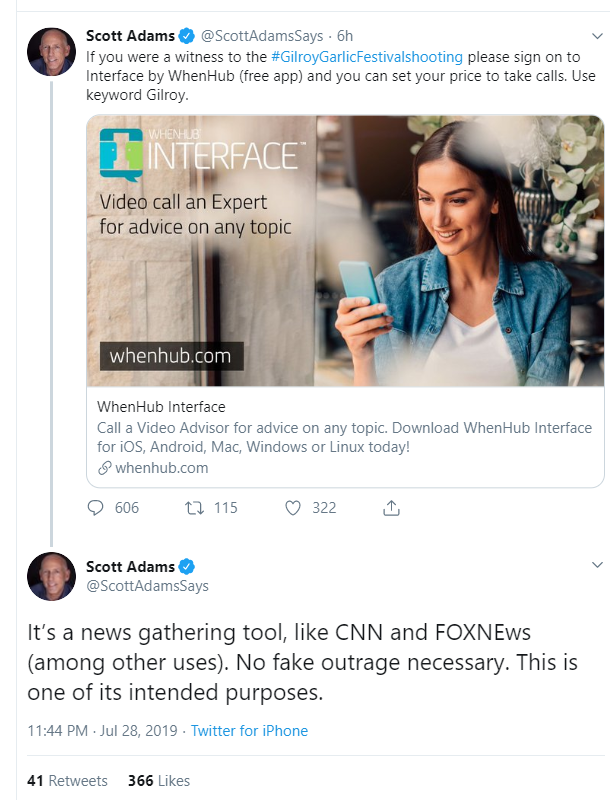 “If you were a witness to the #GilroyGarlicFestivalshooting please sign on to Interface by WhenHub (free app) and you can set your price to take calls. Use keyword Gilroy,” Adams tweeted.

Roughly 23 minutes later, Adams had some advice for critics who correctly identified this as shameless opportunism aiming to capitalise off an atrocity: Grow up and stop it with the “fake outrage.”

“It’s a news gathering tool, like CNN and FOXNEws (among other uses),” Adams wrote at 8:44 p.m. PDT. “No fake outrage necessary. This is one of its intended purposes.”

Adams doubled down in subsequent tweets. Later in the evening, in response to a Twitter user who wrote, “Monetizing a massacre? Disgusting. WTF?” the cartoonist wrote, “You said that on Twitter, which monetizes every news story. As does CNN. Interface is just another tool.” Adams also wrote that “no one needs to charge for anything” on WhenHub, which lets users set an hourly rate. But it is obvious that the potential to make money off the Gilroy tragedy was on Adam’s mind. When challenged by another Twitter user as to why other media outlets such as CNN weren’t offering to pay mass shooting survivors for quotes, he responded, “How do they make money?”

In another response to outraged Twitter users, Adams wrote that their concerns were “fake unless you are bitching about CNN interviewing witnesses as we speak,” and he asked, “Do you scream at all the news platforms or just this one?”

Adams did not immediately respond to our request for comment, although he did respond to the controversy in a livestream on Monday on Periscope, where he continued to stand by his promotion efforts and blamed the controversy on socialism.

The difference between how news organisations gather information and what Adams proposed is vast. Reputable news sources generally do not pay sources (although, there are rare situations in which specific pieces of information are unlikely to emerge any other way). More specifically, they do not try to grease the wheels when trying to quickly obtain eyewitness accounts of mass shootings—not just because waving wallets at people who were just shot at is obscene, but because crises unfolding in real time demand careful editorial discernment and tend to be accompanied by panic and misinformation.

Adams’ characterisation of WhenHub’s utility as a “news gathering tool” in the wake of a mass shooting also appears to be absurdly generous, given that all WhenHub offers in this situation is the prospect of cashing in on the situation. There’s also the whole thing in which the shooter was, as of that time, reported to not be in custody.

To put it another way, Dilbert guy did a Pointy-Haired Boss thing. Except the Pointy-Haired Boss is supposedly an amusing caricature of out-of-touch management, while Adams was trying to convince survivors of a massacre that happened just hours before that they were leaving cash on the table.

As of early Monday morning, a search for the “Gilroy” keyword on WhenHub’s Android app found just one person took Adams up on his offer: someone posting under the name and photograph of Wall Street Journal reporter Jeff Horwitz, whose profile lists the topics “Gilroy, Scott Adams being vile, journalism basics, Blockchain scams.”

Gizmodo has reached out to WhenHub and its chief technical officer, Nik Kalyani, as well as Dilbert syndication firm Andrews McMeel Syndication, for comment. We’ll update this post if we hear back.