Your bargain phone charger can come with a hidden cost—as one 19-year-old woman unfortunately had to find out. According to her doctors, the woman’s generic phone charger likely started a fire around her neck that left her with serious burns and sent her to hospital. Now they’re warning people to be wary of these cheaper, often less safe products.

The woman’s strange medical tale was detailed in a case report by her doctors, published this month in the Annals of Emergency Medicine.

According to the report, the woman was lying on her bed when she suddenly experienced a severely painful burning sensation on her neck. She then went to the paediatric emergency department at the University of Michigan C.S. Mott Children’s Hospital in the US, where she was diagnosed with a second-degree burn that had wrapped around her neck. The woman was luckily not harmed any further, so the doctors cleaned up her wound and she was discharged.

Near as the doctors could tell, from what the woman told them, it’s almost certain that her burn was caused when her generic iPhone charger—nestled under a pillow and plugged into an outlet—came into contact with the chain necklace she was wearing. 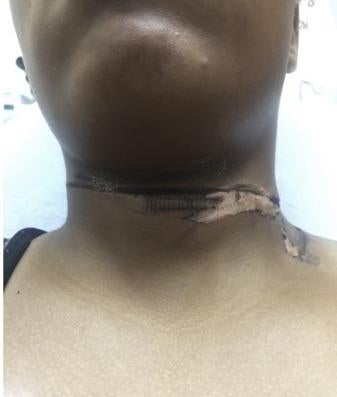 The woman and her charger-caused burn. (Photo: Annals of Emergency Medicine)

The case is little more than an anecdote. But the authors found another case where a man was thrown off his bed by the electrical shock of his charger. And just this week, another woman in the US state of Louisiana reported that her generic iPhone charger had caused a fire in her bed while she was sleeping, burning both her sheets and her arms. And there’s at least some research showing that generic phone chargers are more prone to these accidents than their brand-name counterparts.

One study, cited by the authors in the case report, found that over half of generic iPhone chargers had failed a test for proper insulation. Without an insulation barrier, a high-enough current running through the charger could cause an electrical shock, the authors noted, even if the device itself is low voltage.

Some companies like Apple do have a certification process for the third-party chargers of their products, which should make them safer to use. But there are also some common-sense tips people should keep in mind when using any charger, the authors said.

“Teens and adolescents are particularly at risk of injury due to their frequent mobile device use,” said lead author Carissa Bunke, a paediatric resident at Mott’s, in a release from the American College Of Emergency Physicians, the organisation that publishes the journal. “They should be advised to not sleep with their phones or mobile devices charging in bed and avoid leaving the charger plugged in when it is not connected to a phone.”