On Tuesday evening in San Francisco, SpaceX and Tesla CEO Elon Musk finally shed some light on what Neuralink, his company that has raised $158 million (£126 million) to develop “ultra high bandwidth brain-machine interfaces to connect humans and computers,” has been up to since its launch in 2017.

In the livestreamed announcement, Musk expressed his long-held concern that humans would be “left behind” by developments in artificial intelligence, but said with the development of a true brain-computer interface, humanity could “come along for the ride.” He described the principal barrier preventing this as an information precision and “bandwidth” issue, with existing technology that interfaces with the brain limited in both.

To that end, Neuralink says it has developed a new way of embedding electrodes in the brain using tiny insulated “threads” that resemble a string of pearls and connect to a chip embedded in the skull. Those threads are designed to be both sturdy enough to pass through brain tissue and withstand degradation, according to the company, while also being flexible enough to not damage tissue when the brain shifts in the skull. That could be a significant advance over current methods that use needle-like electrodes that can be risky to insert or offer degrading performance over time.

Per the Verge, Neuralink said that the threads are extremely thin (4 to 6 μm, smaller in diameter than a human hair). The abstract of a white paper credited to “Elon Musk & Neuralink” – which has not yet been peer reviewed – says that the system could support “as many as 3,072 electrodes per array distributed across 96 threads.”

“Because these things are so thin and flexible, the idea is that they move with the tissue instead of tearing the tissue,” Neuralink researcher Philip Sabes told Bloomberg.

In the presentation, Neuralink described plans for an external receiver that could wirelessly communicate with the embedded chip and connect to apps, though it currently relies on a hardwired external connection (USB-C).

Neuralink also debuted a surgical robot equipped with advanced optics that it says is precise enough to weave the delicate threads throughout brain tissue without damaging blood vessels. The research paper said this system is “capable of inserting six threads (192 electrodes) per minute,” the Verge wrote. According to Bloomberg, Neuralink also wrote it has used the robot to perform at least 19 surgeries on animals with success rate of 87 per cent. It does, of course, require a brain surgeon to actually operate. 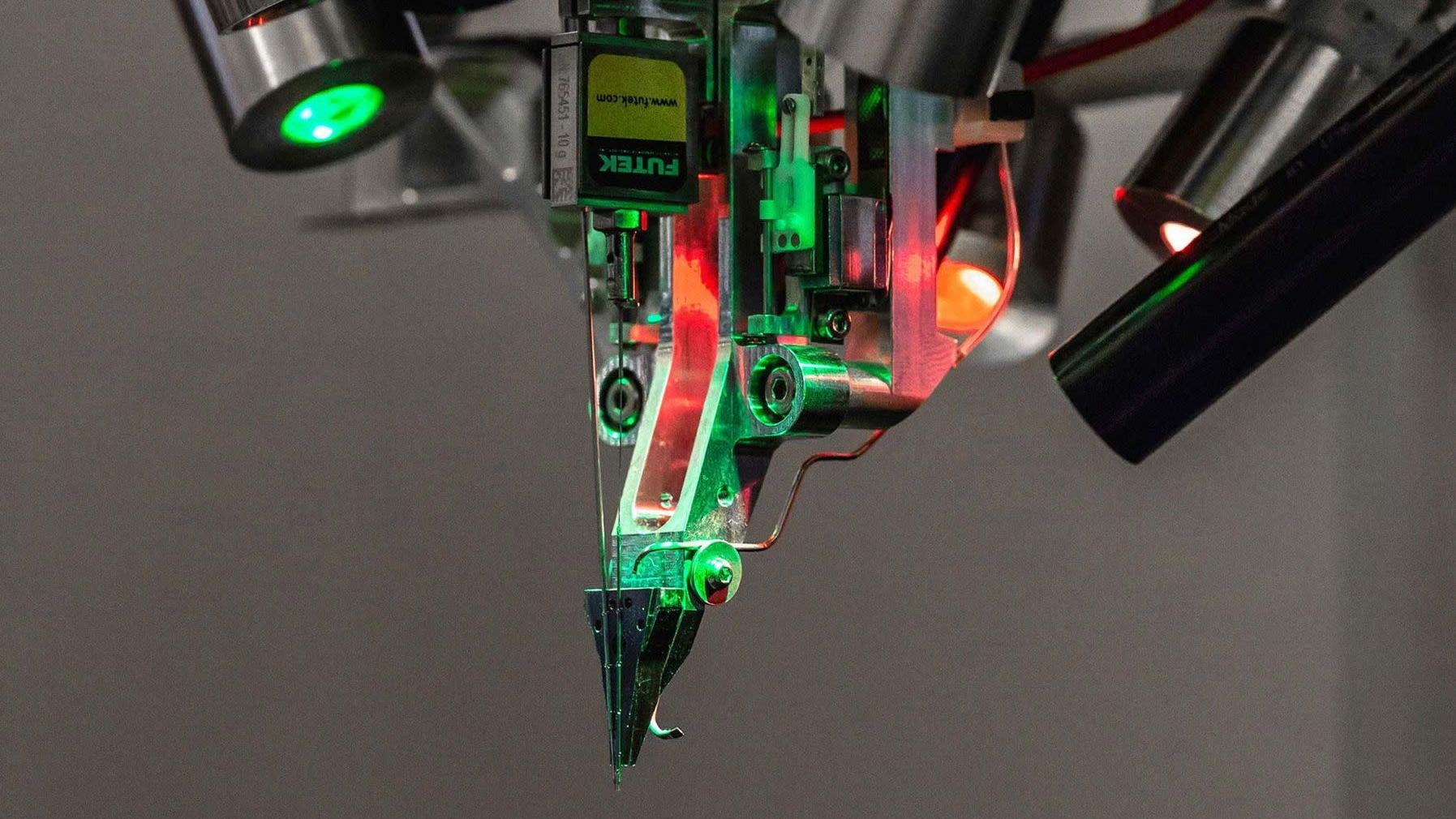 Neuralink’s aim is to eventually make this process as simple as LASIK outpatient eye surgery, Musk told the audience. That goal is not a short-term one. According to the New York Times, Neuralink president Max Hodak said the technique currently requires general anaesthesia and drilling a series of holes through the skull, though they eventually hope to switch to a laser and switch to localised anaesthesia.

“One of the big bottlenecks is that a mechanical drill couples vibration through the skull, which is unpleasant, whereas a laser drill, you wouldn’t feel,” Hodak told the Times.

Musk wants to start human testing of this system as early as next year. But the company hasn’t started the process of obtaining approval for such tests from the Food and Drug Administration, which has high barriers for human trials.

The Times reported that during a demo at the Neuralink building on Tuesday, the company showed off what it said was “a system connected to a laboratory rat reading information from 1,500 electrodes – 15 times better than current systems embedded in humans.” If successfully applied to humans, that would be sufficient for research and medical applications, the Times wrote, though it noted that many more steps will be necessary to demonstrate its utility:

Independent scientists cautioned that results from laboratory animals might not translate into human success and that human trials would be required to determine the technology’s promise... The flexibility of the Neuralink threads would be an advance, said Terry Sejnowski, the Francis Crick Professor at the Salk Institute for Biological Studies, in La Jolla, California.

However, he noted that the Neuralink researchers still needed to prove that the insulation of their threads could survive for long periods in a brain’s environment, which has a salt solution that deteriorates many plastics.

There are numerous other reasons to be cautious. Musk is well known for making big promises that often fail to pan out and offering up ambitious timetables for grandiose projects (i.e. Mars colonisation) that have attracted labels like “messianic huckster” and “the best used-car salesman on Earth.” Neuralink’s claims are all but certain to attract a great deal of scientific scrutiny in the coming days.

According to the Wall Street Journal, Neuralink’s research paper has not yet been peer-reviewed, as well as lacks critical data on how well it functions over time or whether it can cause brain inflammation:

The paper, which wasn’t peer-reviewed, didn’t include data on the long-term stability of recorded neural signals nor the brain’s inflammatory response.

“That is utterly critical” before any device can advance to human trials, said Loren Frank, a University of California, San Francisco neuroscientist developing brain-computer interfaces.

Neuralink has said it is doing those experiments but isn’t ready to make the data public.

Tim Harris, a senior fellow Howard Hughes Medical Institute’s Janelia Research Campus and neural interface developer, told the paper the system needs to be able to last at least five years in the brain to be worth implanting in a human.

The Journal noted that while Neuralink says the system was “in theory” designed to stimulate brain cells, a major next step, the paper says “we have not demonstrated these capabilities here.”

According to Bloomberg, Neuralink will also have to demonstrate not only that the implants function but that it can do “something safe and useful with them by providing therapies – something many scientists see as an open question.” For example, actually decoding nerve pulses and translating them into usable information is a daunting task. Per Ars Technica, researchers have already developed brain-computer interfaces like BrainGate, which has been used for limited control of computers and robot arms, as well as developed ways to stimulate nerves involved in hearing and vision. But “anything more sophisticated than these simple input or output technologies remains purely in the realm of science fiction,” the site wrote.

You can watch Neuralink’s presentation here.