Not even the oceans’ top predators can escape the ruinous embrace of humanity’s plastic waste, suggests new research. The study indicates that over recent decades, many hundreds of sharks have been reported falling victim to entanglement in fishing gear and other marine plastic debris.

Snarls of plastic waste adrift at sea are a menace for marine wildlife, ensnaring and potentially killing everything from sea turtles to grey whales. Elasmobranchs—sharks, rays, and their relatives—get caught up in the stuff too, but it’s a relatively poorly studied phenomenon, especially considering that the International Union for Conservation of Nature lists 31 per cent of sharks and rays as threatened with extinction. To fill this knowledge gap, researchers compiled data from accounts of entanglements in the scientific literature to better understand how sharks and rays were getting entangled.

“Being quite active on social media myself—particularly Twitter—I had seen reports of entangled sharks and rays appearing on my timeline, so wanted to delve into this a little bit deeper,” said Kristian Parton, a research scientist at the University of Exeter and lead author on the new study.

By scouring scientific papers from 1940 onwards, and Twitter from 2009 until this year, the team found reports of over 1,000 individual sharks and rays tangled in plastic waste. The scientific literature accounted for about half that number, but did so divided up into less than 50 reports. Despite Twitter only having a decade of data available, the team found nearly twice as many reports of entanglement on Twitter than they did over 80 years of scientific papers.

“We feel this demonstrates that entanglement of sharks and rays is happening at far higher levels than reported in the scientific literature,” Parton said.

Dozens of species were getting entangled, suggests the study, published earlier this month in the journal Endangered Species Research. Many of these were dogfish and reef sharks, but also great whites and makos. The gigantic and serene whale sharks were particularly prone to getting wrapped up, similar to this unlucky colossus in Hawai`i last year. 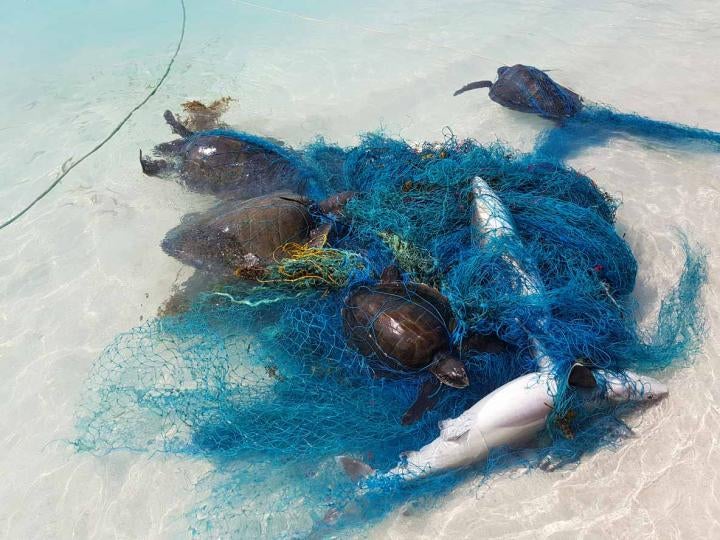 Species that migrated long distances or spent much of their time in open water seemed to encounter the plastic more readily, becoming stuck. Sharks and rays with weird body shapes or protruding features—like winged manta rays or spike-snouted sawfish—were also more likely to get trapped.

The clear majority of the sharks and rays were getting entangled in “ghost” fishing gear—lines or nets that have been lost to the sea or purposefully cut loose. An estimated 6.4 million tonnes of this derelict gear enters the oceans each year, continuing to capture wildlife long after being abandoned.

But while for individual fish, ghost gear is a hazard, Parton and his colleagues don’t think it’s an existential threat for sharks and rays.

“Looking at our data, we feel entanglement within plastic pollution is nowhere near the level of threat when compared to the likes of bycatch, shark finning and over-exploitation,” Parton said.

Parton says more data needs to be collected to know just how detrimental entanglement is for sharks and rays in the long term. If juveniles get entangled more often than adults, for example, that might be a problem for population growth. Working towards this goal, Parton and his team have set up an online entanglement report form—ShaREN / Shark and Ray Entanglement Network—so that anyone can submit information on observed entanglements.

Parton also stresses the need to deal with ghost fishing gear, perhaps by switching to biodegradable materials or placing electronic tags on gear so they can be tracked and pulled from the water. People in the fishing industry also need to be provided incentives to remove ghost gear, says Parton, and the facilities to properly dispose the junk for good.