Hey, Handmaid's Tale, I Have Some Questions About This Body Horror Thing

The latest episode of The Handmaid’s Tale sent the Waterfords to Washington, as they negotiate for the return of June’s baby and grapple with a new and harsher side of Gilead. The episode is filled with on-the-nose—or rather, just under-the-nose—metaphors about the silencing of women. But there’s one moment that needs to be unpacked in detail, because it represents everything wrong with The Handmaid’s Tale right now.

[Editor’s Note: A quick content warning as there is a graphic image lower down in this post.]

“Household” takes June (Elisabeth Moss), Aunt Lydia (Ann Dowd), and the Waterfords (Yvonne Strahovski, Joseph Fiennes) on a road trip out of Boston and into the Gileadean capital of Washington DC It’s a much-needed departure for the series, giving us a new perspective and glimpse at the wider world of Gilead. June and Aunt Lydia soon surmise that things are, well, different in this neck of the woods. The Washington Monument is now a cross, escalators are segregated by gender, and there are designated “Handmaid Waiting Areas” in public spaces, where they’re forced to kneel on the floor until beckoned by their families.

Oh, and handmaids all wear gags over their mouths—much to June’s chagrin, as well as Aunt Lydia, who prefers obedience over silence.

It’s a powerful piece of imagery, even if it’s one whose metaphor is so obvious it ventures into after-school special territory. The only time we’ve previously seen gags on the show was as a form of punishment. For example, Emily (Alexis Bledel) had a gag on during her trial so she couldn’t speak in her own defence, and June and the other handmaids were forced to wear them when facing a mass hanging.

In June’s world, handmaids have had almost everything taken away from them...except their voices. But in DC, you can’t even have that. It’s a terrifying thought and visual, one that was evocative enough on its own. Then, for no reason, the episode chose to go a step further. 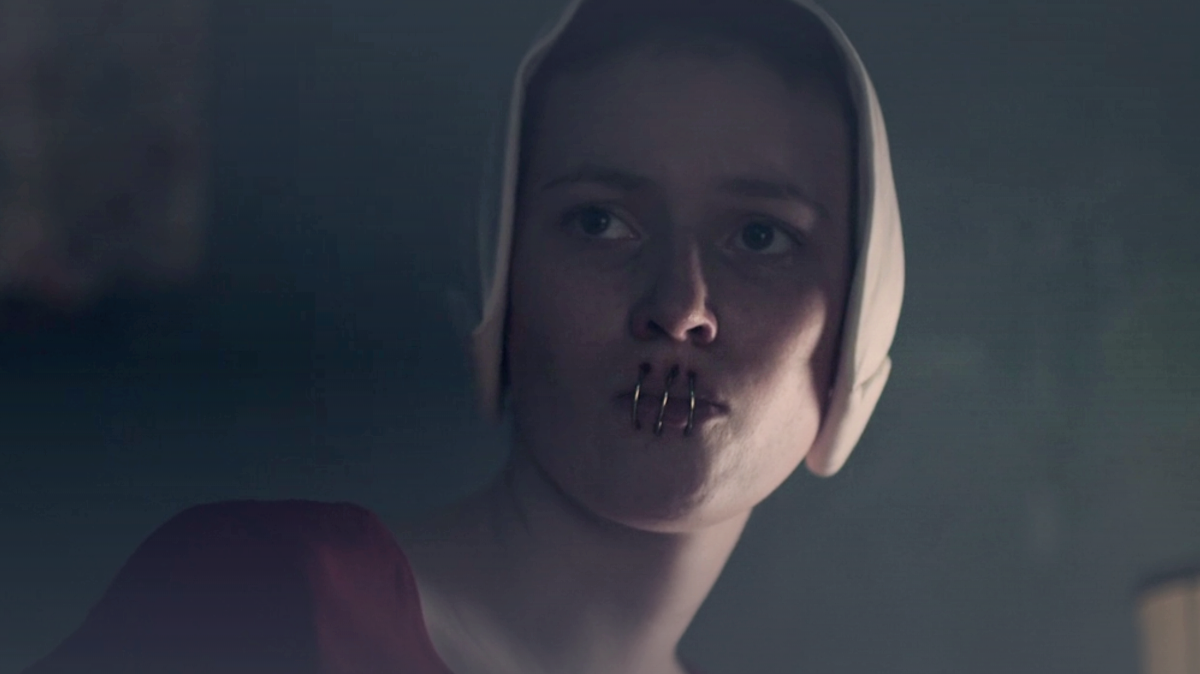 No, you’re not imagining things. The handmaids in Washington DC have hoops lodged in their lips. Not only does this prevent them from speaking, but from opening their mouths at all. It’s unclear whether these are permanent staples or ones that can be easily removed like piercings, but it seems the handmaids have no say when they’re in or out. It’s a shocking and practically unthinkable piece of body horror, where June’s repelled reaction matches our own. How could Gilead do this? How could they be so cruel? But there’s another question that’s even more significant:

How the hell does this make any sense?

It’s one thing to force handmaids to wear gags in public, or even in private, to ensure they never speak. It’s a horrifying change from June’s “norm” that makes perfect sense in their world. Stapling a handmaid’s mouth shut is something else entirely, a needlessly graphic shock device that starts to break down the moment you think about it logically.

These handmaids are unable to eat solid foods, something that puts their bodies and their potential babies at risk. They can’t brush their teeth, which means tooth decay and rot, and they’re under constant threat of choking. They cannot yawn, sneeze, or swallow without suffering immense pain or some kind of tear on the skin. And unless the handmaid and her staples are meticulously looked after by a medical health professional, those wounds are ripe for infection. A handmaid’s value is solely based on her ability to bear healthy children. In what world would it make sense to put their lives and bodies in such danger, especially when temporary gags perform the exact same function? 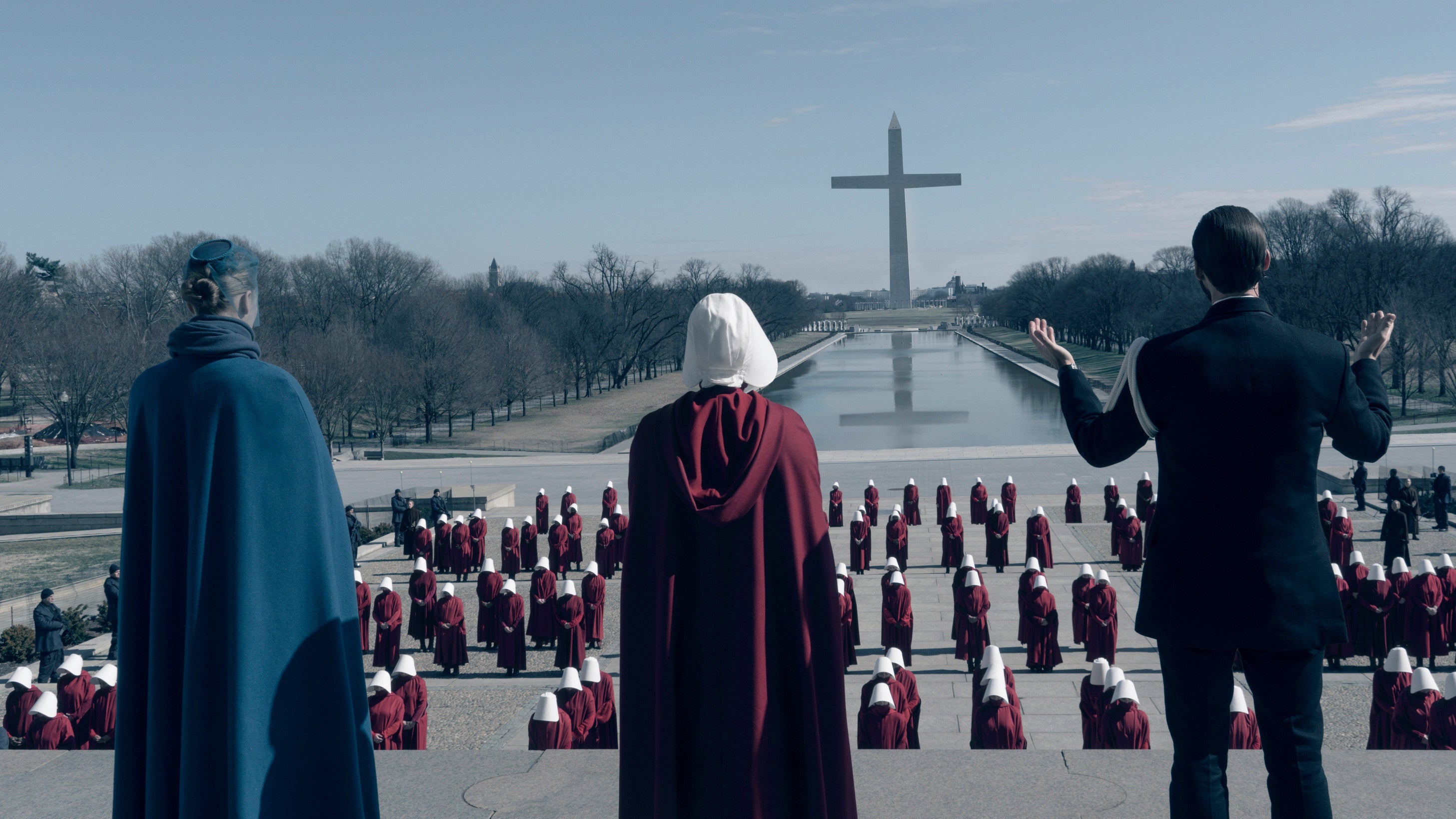 As far as we know, every one of those handmaids has a stapled mouth. (Photo: Barbara Nitke/Hulu)

The show is trying so hard to keep June alive, because Moss is the star, cloaking her in plot armour as she tries more rebellion with fewer consequences (the episode ends with June screaming at Serena as thousands of handmaids and Eyes stand by within earshot). It’s starting to disconnect us from the clear and present danger that the show used to be so good at conveying. Therefore, moments like the mouth staples, or when June had to bury a Martha’s body in the commander’s backyard, seem like attempts to make the audience feel just as terrified as we did during the inaugural season. But you don’t need to amp things up to make us worry: It’s 2019. We’re scared of everything.

I understand that stakes need to be raised, that the audience needs clear signals that the times in Gilead are a’changing. But guess what: The gags did that just fine. The Handmaid’s Tale works best when the fears it presents are real. When your dystopian reality starts to feel more like a sequel to Saw, maybe it’s time to rethink the world you’re trying to warn us about.