You may have noticed Google launching a succession of cut-down, lightweight, basic apps under the Go label. The idea is they’re intended for countries where a combination of spotty internet and tight data caps makes using all the cool apps on your phone a chore. Only those issues aren’t just happening abroad. Which means Android Go apps can be just as useful here.

It’s worth noting that not all these apps are going to be available to you through the Google Play Store, as they’re region-locked in some cases. The ones that you can’t get through the normal means can be sideloaded by visiting APKMirror in your mobile web browser and searching for the relevant app.

They’re all tied into the Android Go operating system, which itself is a cut-down version of the main Android OS intended for entry-level smartphones and less-than-reliable connections. Keeping clutter and bloat down to a minimum is the order of the day, and that means some of the usual bells and whistles get lost along the way.

Something to note about all of these apps is their small file sizes, often just a few megabytes (yes, that’s megabytes). Not only does this mean they download more quickly, but it also means they open up in a snap, even on older hardware. There are compromises along the way though and we’ll get to those.

It should be noted that the only app we weren’t able to get working on our phone, for no apparent reason we could figure out, was Google Assistant Go. As with the other apps here, it serves up a lightweight version of the Assistant—we weren’t able to test it, but smart home control and reminders are two of the features that are missing compared with the main app. 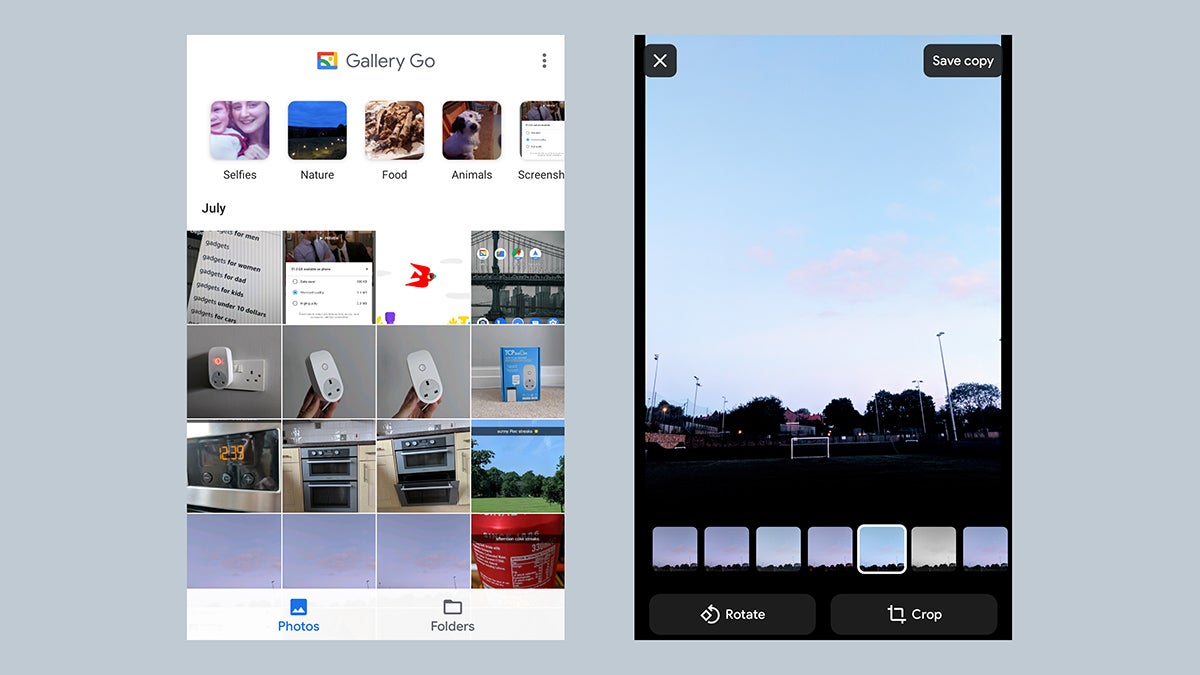 The most recently launched Go app is designed around photos. The key difference in this stripped-down edition of Google Photos is that there’s no online access—you can’t see your pictures and videos on the web, just what you’ve got stored locally on your device.

Despite that lack of access to the cloud processing that Google Photos offers, there is some local AI at work here, because your photos will get sorted into basic folders like selfies, animals, nature, and food. You can also create folders manually to make it easier to get around your library.

The app doesn’t include any menus or settings, just a Photos tab or a Folders tab. And editing is limited. You can rotate and crop photos, apply an auto fix, apply one of several filters, and that’s it.

Do you need to install it? It works well as a lightweight photo viewer and may even be easier to use than Google Photos in terms of getting around pictures actually saved to your phone. But if you have a web connection you’re always going to turn to Google Photos first. 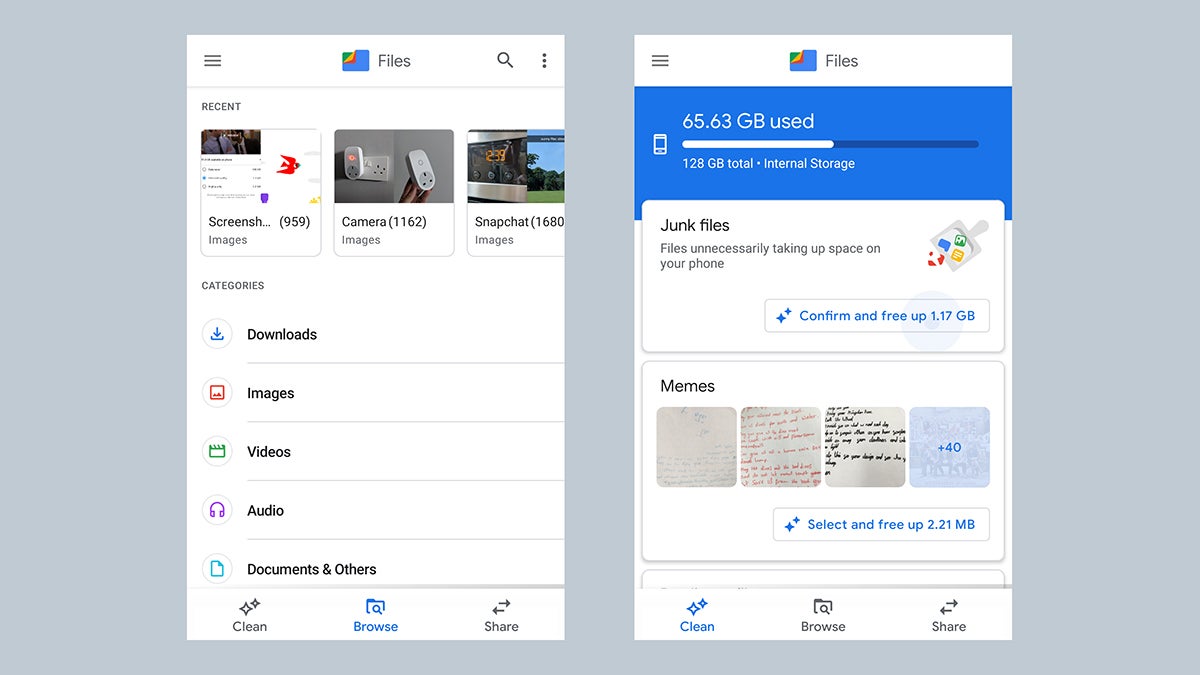 Files Go or rather just Files by Google is one of the more capable Go apps, and seems to be just as capable as the Files app you get as part of Android these days (though perhaps not as easy on the eye). You can dig into the folders on your device, as well as browse by file type (downloads, images, video, audio, and so on).

If Files Go does have a particular mission in life though, it’s helping you free up space on your Android device: It has a dedicated Clean tab just for this purpose, where you’re advised to delete duplicate files, junk files you don’t need, and files automatically backed up from instant messengers. This is all optional but the app shows you just how much space you can save in each case.

You can also use the Files by Google app to share files with other people nearby who also have the app installed. It works like an ad hoc wifi network, so no data is used up—it’s very much along the lines of the AirDrop feature you get with iOS.

This is very much an app that anyone can make use of (which might be why Google dropped the “Go” from its name): the clean-up and file sharing features are really useful, especially if you want those features to work with the minimum of effort on your part. The actual file browsing works really well too. 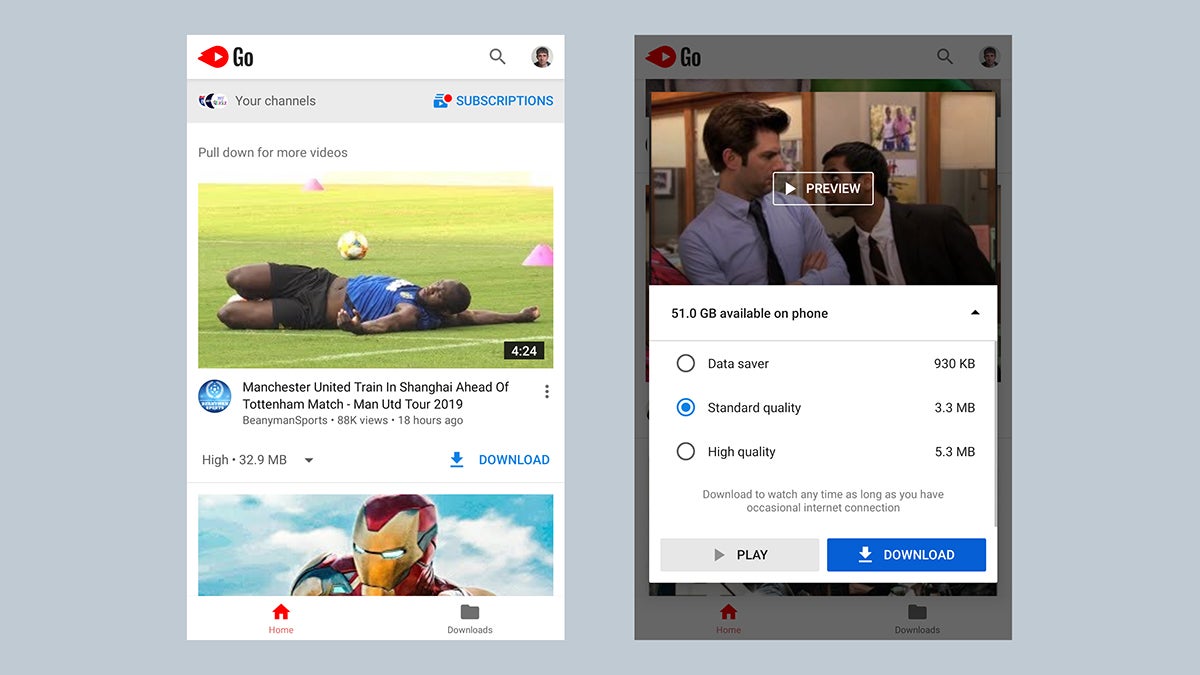 This is one of the Go apps that makes the most changes from its full-sized, fully-featured equivalent, and they’re actually really smart changes too. For a start the interface is much less cluttered, with no Stories, or links to YouTube Movies, or access to your own videos, or auto-play previews as you scroll.

You can basically see recommended videos, your subscriptions, and use the search function, and that’s it. But in terms of useful features, the key one is the ability to download videos rather than play them—you get the choice every time you tap on a video, to play it or download it for later.

Not only that, you get a selection of three video quality settings to choose from as well (data saver, standard, and high). The app shows you how much storage space each one will take up, and how much you’ve got left on your phone. You can also opt to stream the video right away at any of those three quality settings.

That makes YouTube Go very useful for travelling or taking to places with spotty wifi where a connection might come and go (you can do this on regular YouTube, but only with a YouTube Premium subscription). Extra features like high-quality 4K playback, the Google Cast button, and subtitles, are off the table, but you might be able to live without them. 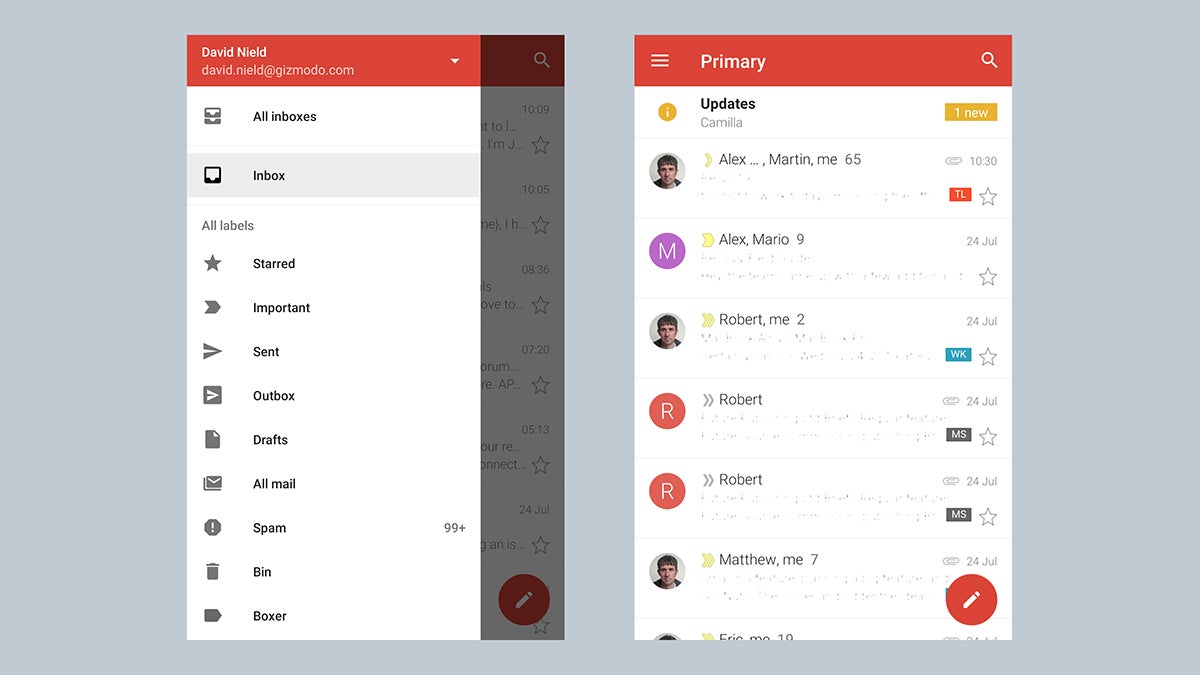 In contrast to YouTube Go, Gmail Go is very similar to the app it borrows from. Actually, it’s a lot like the main Gmail app used to be in terms of looks and functionality—there’s no smart replying, and no email snoozing, and no suggestions when you try a search.

You don’t get the big search box up at the top (it’s back to a magnifying glass at the side), and you don’t get inline attachment previews either. It’s like stepping back in time to before Gmail on Android last had an overhaul, but multiple accounts are supported, as are labels and categories and all the Gmail basics.

Cutting out all those newer features means the app is much more lightweight, and it’s quicker getting around (especially with a slower connection to the internet). You can also compose messages and reply to emails offline, but then you can do this in the main Gmail app too (based on our quick tests at least).

With all that in mind, there’s really no reason to install Gmail Go if you can use Gmail—it cuts out a substantial number of features for only one advantage, which is that the app is smaller and more lightweight. Unless you’re really struggling on an old and slow Android device, stick to Gmail proper. 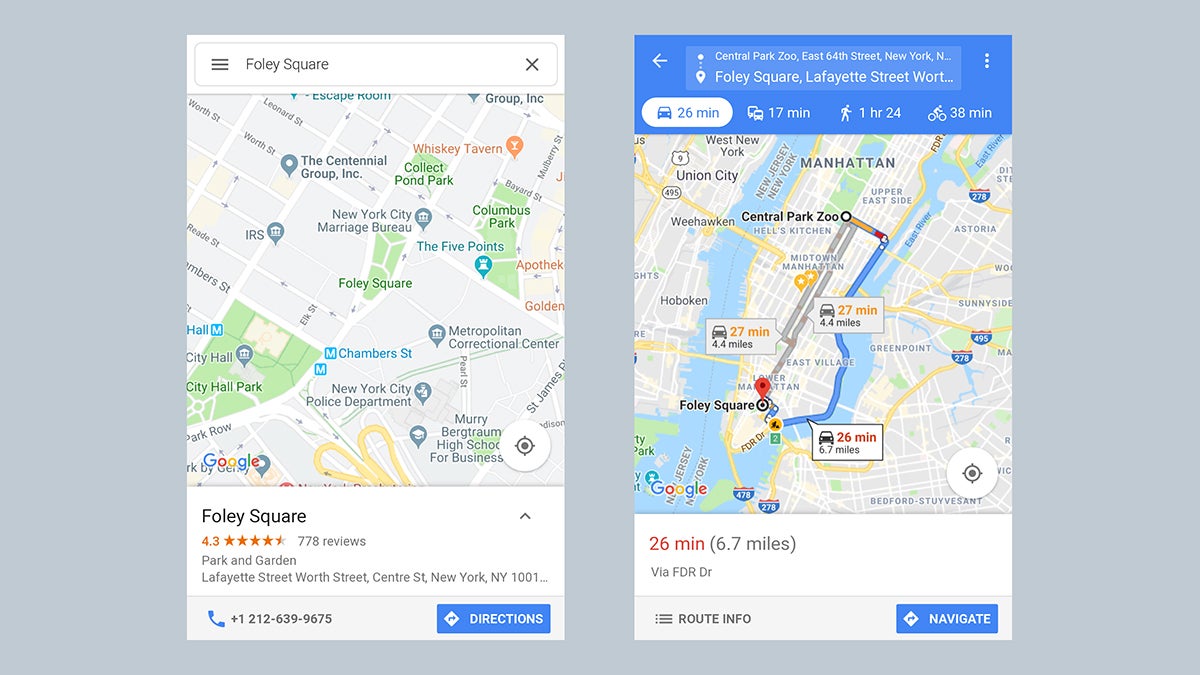 The lightweight Maps Go actually runs as a web app, though all signs of a browser window are hidden. The big benefit of that approach is that data is only downloaded as you need it—Google says Maps Go is around 100 times smaller in terms of file size than the main Google Maps.

All the key features are here (like directions and information on places), the interface is just more pared down. The Explore tab (for finding places nearby) and the For You tab (for recommending places to you) are gone, but you can still see traffic, and terrain, and times of the next bus to your destination.

Plot out a route, and Navigation for Maps Go takes over. This basically just focuses on the route, and tells you about traffic, and that’s it—you can’t search for places en route, you can’t see the directions in advance, and you can’t share your trip progress with other people. Recently added features like a speed reading are missing too. It’ll get you from A to B and that’s about it.

There’s really no need to install Maps Go and Navigation for Maps Go unless you struggle for storage space on your phone or data connectivity while you’re out and about—Google says both these apps are optimised to keep working on spotty connections. The full Google Maps has an offline feature that lets you cache map tiles ahead of time, and we think that might be a better option for people heading towards areas with crummy internet. 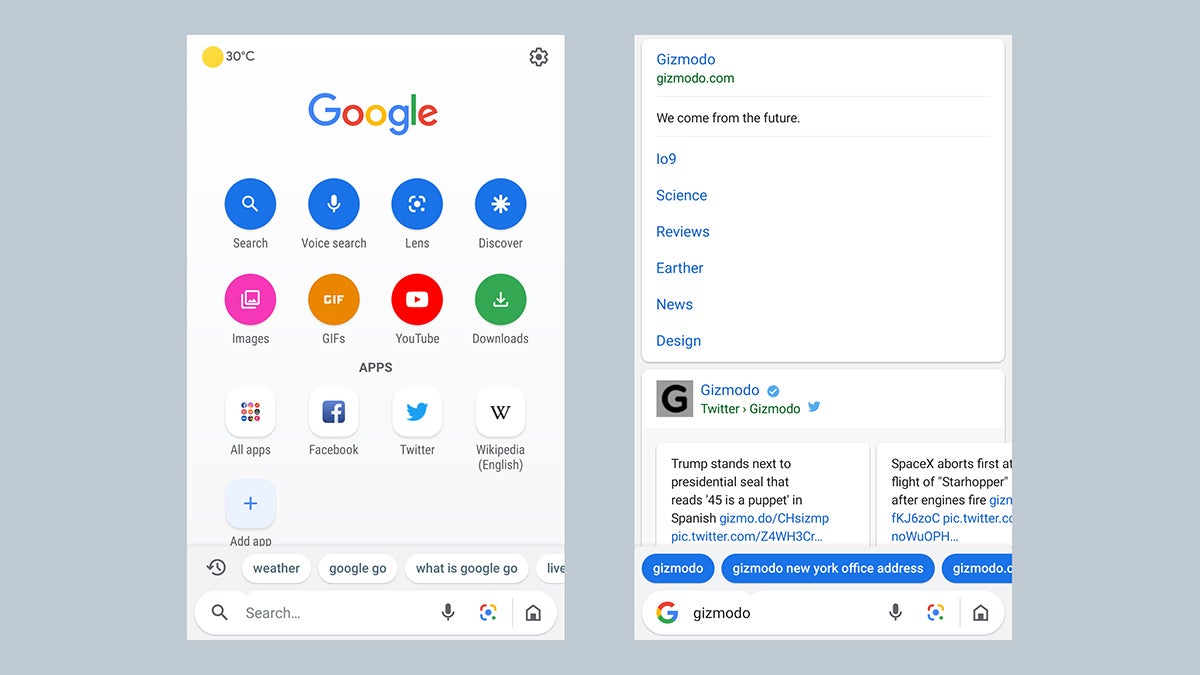 Last but not least, the Google Go app, which covers all the same jobs as the main Google app—searching the web, getting the weather forecast, opening up web links in a basic, built-in browser. Google says the search results are optimised to save “up to 40 per cent” of data and the app is certainly quick and slick based on our testing.

You don’t get all the news boxes and video results in Google Go that you get in a regular Google app search, so it’s actually a pretty good way of cutting down on the clutter if you want to get around the web faster. There’s also an interesting feature that will read aloud web pages to you if you want to give your eyes a rest. The app’s front screen isn’t taken up with recommended articles either, though you can find them with a tap.

Aside from the cut-down results and the reading aloud feature, the differences really are just in the minimal way the app is presented and coded, with bloat kept down to a minimum and a special emphasis on basic navigation that only takes a few taps. It’s less demanding on your phone and it’s less demanding on whatever connection you’ve got.

We’re not sure we’d necessarily recommend using it over the main app, even if you’re on your travels, but it might be handy to have around just in case you’re in a place where the main Google app (or your main web browser) is struggling to load—it’ll certainly help you get to your results fast. And if you’d rather Google stuck to the job of search rather than offering up personalised article suggestions every day, it’s worth a look too.