The mapping app on your phone isn’t always as reliable as you might hope, and despite all the advances in AI and street photography, Apple Maps and Google Maps can still benefit from some human editing. Here’s how to make your favourite maps app better for you, and everyone else who uses it.

Google Maps actively encourages interaction, even if it’s just leaving a star rating for somewhere you’ve visited. Those ratings don’t take long to leave but can improve your place recommendations next time, as well as help other travellers (Google will pick out phrases like “great cocktails” and match them with what other people are searching for).

Even better, leave a review and some photos: Just tap on a place on the map, bring up its info card, and scroll down to leave a review or a picture. Being able to take a look inside somewhere can really help other users when they’re choosing where to go next.

When it comes to the serious business of correcting or adding venue info, tap Suggest an edit below the address, phone number, and opening hours. You can request that places be removed (if they’re closed or fake), change the listed opening hours or the location category, add a website, and more. 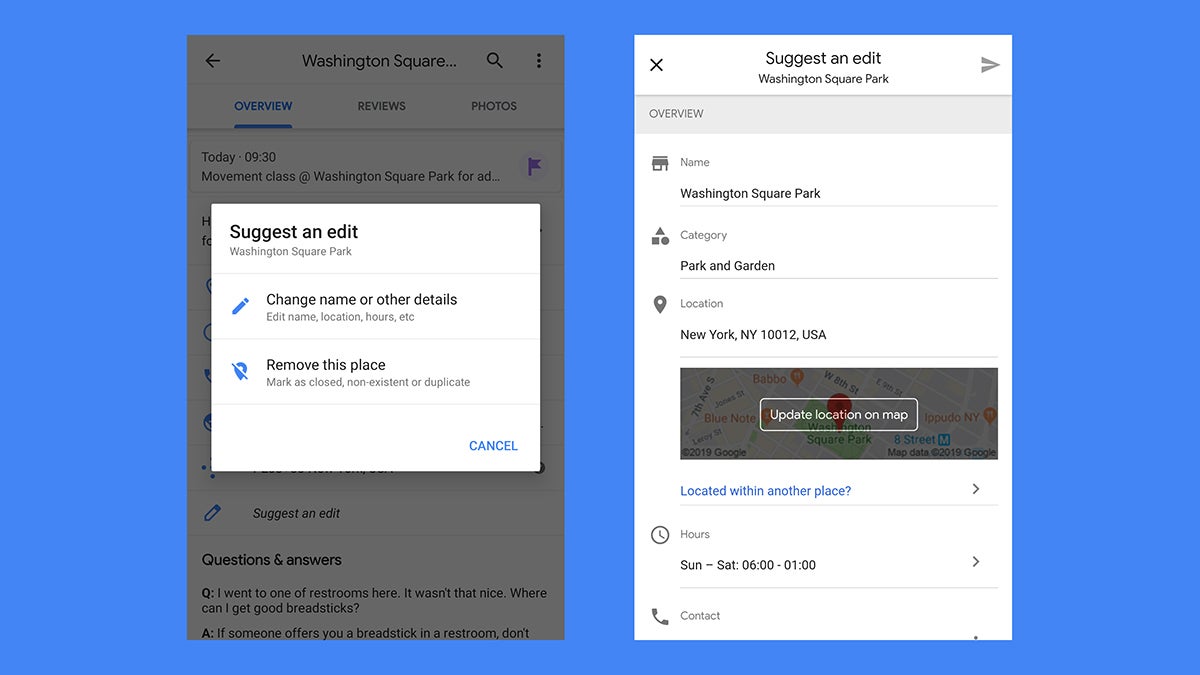 All of these suggested edits are reviewed by the Google Maps team, so it might take a while for them to show up in the app. Any corroborating evidence you can provide—like a photo showing a sign of the opening hours—can speed up the correction turnaround time. You can even shift the marker for a place by tapping Update location on map.

The Suggest an edit button appears when you select a place on Google Maps on the web too, so you can do this on your computer if it’s easier. You may or may not get an email about changes being approved, so don’t think your changes haven’t been applied just because you haven’t received any notifications.

Google doesn’t say how it weighs up which edits get applied—we’re guessing that the amount of detail you provide, how many edits you’ve suggested in the past, and suggestions from other users all play a part.

If you need to add a new place from scratch, open up the main menu in the mobile app or on the web, and choose Add a missing place. You can fill in the name, location, website, opening hours and more. Again this is subject to review by Google.

When it comes to the all-important routes for getting from A to B, if Google Maps has got it wrong, you can flag this too. You need to actually specify a route and then bring up the directions on the web (this reporting option isn’t available on mobile for now), then click Send feedback (bottom right). 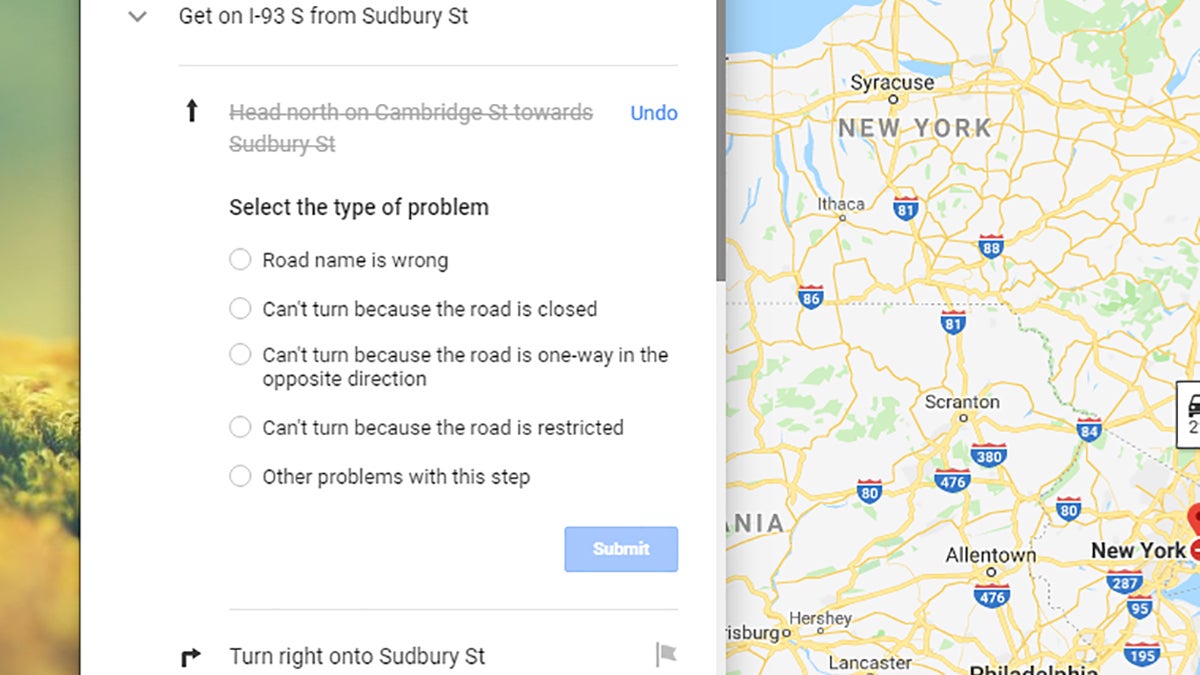 Google Maps asks you to select the specific part of the directions that are wrong, then give your reasoning: A wrong road name or a closed road for example. Click on Submit and again the report gets sent to Google for review.

You can still report issues while you’re on the move. When you’re in navigation mode on your Android phone (this isn’t possible yet on iOS), tap the estimated journey time to bring up the individual steps in the journey, then select Add a report—your choices are a crash, congestion, or a speed camera.

Finally, you can report issues with a particular road on Android or iOS by tapping on the road in Google Maps, then bringing up its info card, then choosing Report a problem. Road closures, private roads, incorrectly marked roads, and one-way roads can all be logged from here.

Apple Maps isn’t quite as inviting as Google Maps when it comes to user contributions and corrections, but you can still play your part. Tap on a marked place or indeed any spot inside Apple Maps on iOS, bring up its info card, and at the bottom, you’ll notice an option labelled Report an Issue.

Via this button you can let Apple Maps know about problems with a place’s location on the map, or about any of the details listed along with it (like opening hours or a contact number). These details will be reviewed by Apple, and you can add extra notes and a photo to support your suggested revisions.

Businesses that have closed down can be reported through the same menu. If you’re on macOS, meanwhile, the same Report an Issue button can be found on any place info card, which takes you through a similar process. 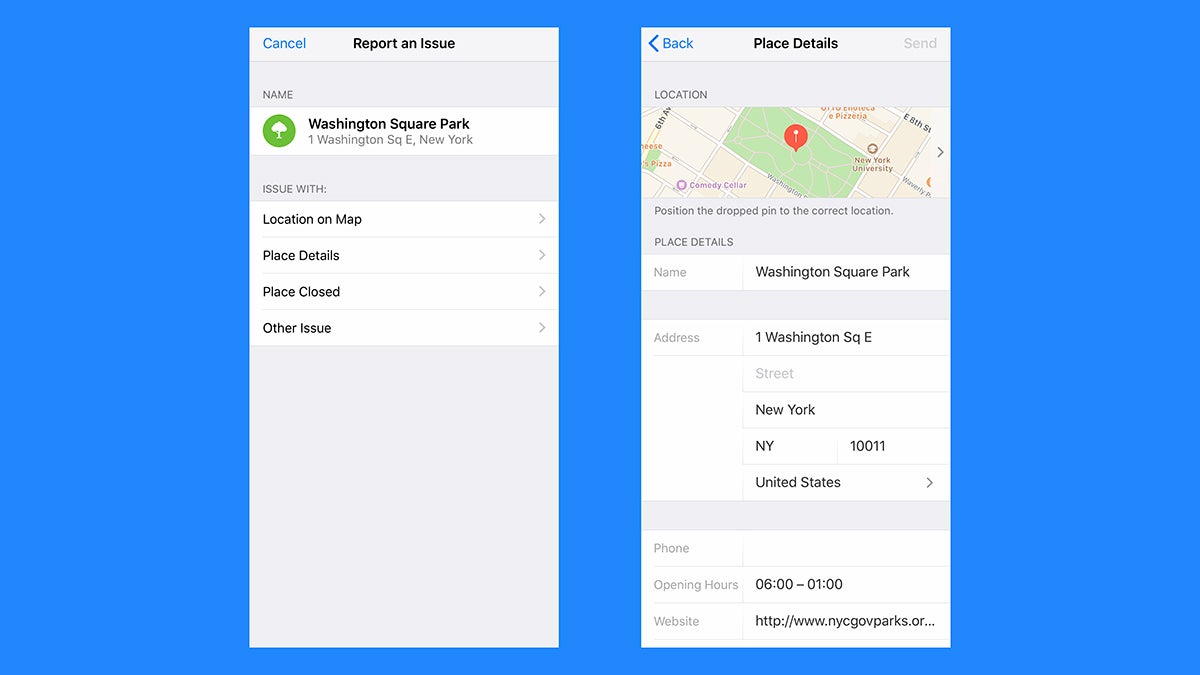 There’s no way to add photos or to leave a review of a place on Apple Maps—you need to head to the Yell or TripAdvisor website or app for that—but you can favourite particular places from their info cards.

If you tap the information button (the small “i”) in the top right corner of the Apple Maps interface, you can pick Add a Place to do just that. You’ll be asked to give details like a place category, address and phone number (where available), as well as pinning down the new location on the map.

From the same information menu you can choose Report an Issue to advise Apple about corrections in all kinds of areas: Map labels, step-by-step directions, public transit timetables and more. In the case of navigation directions, for example, you can point out the particular step that’s wrong, and add notes and a photo as evidence. 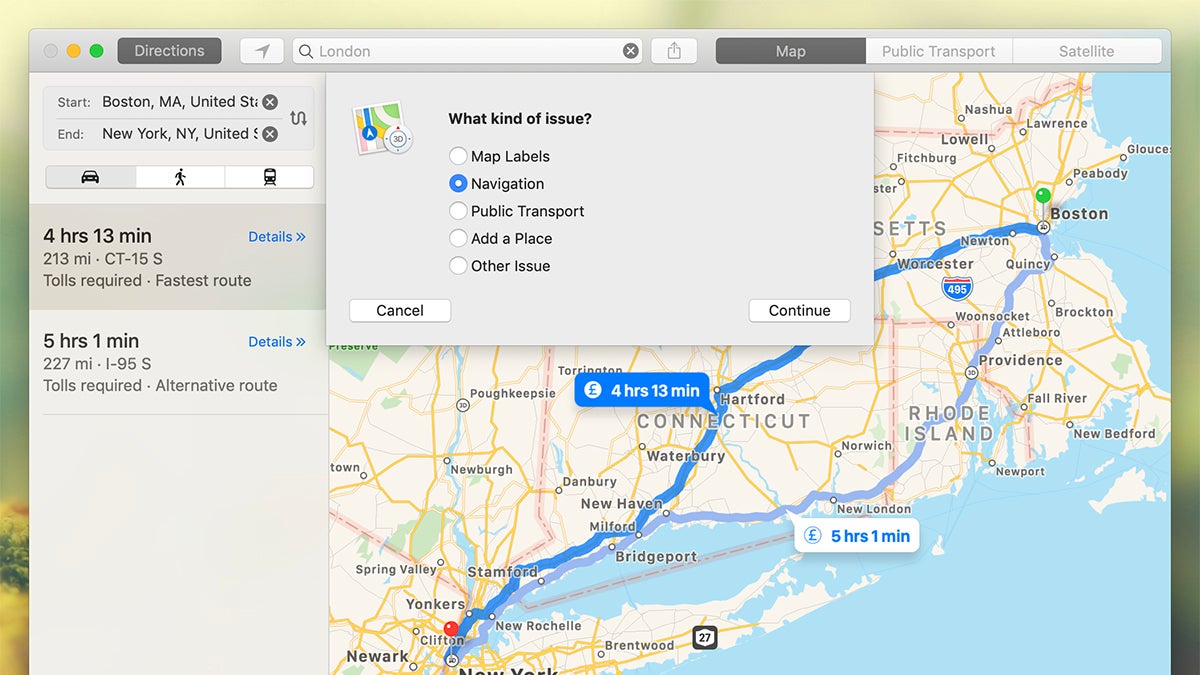 This ubiquitous Report an Issue button also appears on the step-by-step directions card (with the green Go) once you’ve loaded them in the iOS app. There’s one extra option here if you use this particular button, which is to suggest a better route other than the one Apple Maps has put forward.

The correction options inside Apple macOS are all behind the Report an Issue option on the Maps menu—the options will change based on what’s on screen and what’s selected, but again you can make suggestions about directions, add new places, and so on. Like Google, Apple reviews all the suggestions about the mapping data, and says it might contact you via email if clarification is needed.

It’s also worth noting that you can leave all kinds of feedback—from bugs in the Apple Maps software to road closures—via the feedback forms for Apple Maps on iOS and macOS on the web.