There’s a reason instant cameras died the first time around: They’re unwieldy, the film is expensive, and even if you’re a great photographer, you’re going to have a tonne of overexposed or blurry snaps in which no one looks good. Their recent resurgence is as much about nostalgia as it is about looking cool when you post a pic of your crappy-yet-artful shots on Instagram because let’s face it, while instant photography kind of sucks, the unpredictability is part of what makes using instant cameras fun.

What is it?: The smartest instant camera out there
Price: £150
Like: Cost effective. Lots of convenient features. Easy to carry.
No Like: Lacks that instant camera charm.

The Fujifilm Instax Mini LiPlay replaces all that analogue quirk with digital finesse. It’s Bluetooth-enabled and has a companion app which you can use to print photos from your smartphone camera roll. It does away with a viewfinder entirely, opting for a 2.7-inch colour LCD screen like your typical point-and-shoot. You can even record audio, and then print a QR code onto your photo. It’s a feature no one asked for but is gimmicky and fun to use—at least for one social media post. The result is a camera that’s way more convenient, but lacking soul.

Taking photos with a regular instant camera is simple. You get your friends to pose, you snap a pic and cross your fingers the photo turns out alright. The fun is waiting to see how the film slowly develops. At best, the photo will be mediocre, but candid. That makes the occasional gem all the more satisfying and precious.

Using the LiPlay is a much more controlled experience. You take photos, review them on the LCD screen, and then decide whether or not you want to print them. On the one hand, this is great for your wallet because there’s zero chance you’re going to waste expensive film on a dud shot. On the other, now that the LiPlay gives you the power of review, will you ever print an authentic but unglamorous photo ever again?

In my experience, the answer is no. If I weren’t reviewing the LiPlay, I would never have printed any of the janky photos I took while testing. Instagram has for better or worse, taught us all to value magazine-spread tableaus of ordinary life. I admit I’m a vain millennial. Left to my own devices, I’d probably only ever use the LiPlay’s smartphone camera printing feature. Honestly? I don’t think I’m the only one. At the LiPlay launch event, Fujifilm invited a bunch of Instagram influencers to share their experiences using the camera. Part of that was a mini-gallery of their photos, and trust me, there was nary a crappy photo in sight. Everything was gorgeously lit, meticulously composed, and actually, I’m pretty sure they just printed off their Instagram feed. There was none of the candidness that made instant cameras so delightful in the first place. One influencer told us how the LiPlay was the perfect tool for ‘documenting experiences,’ but that’s only true if your experiences are devoid of imperfection. 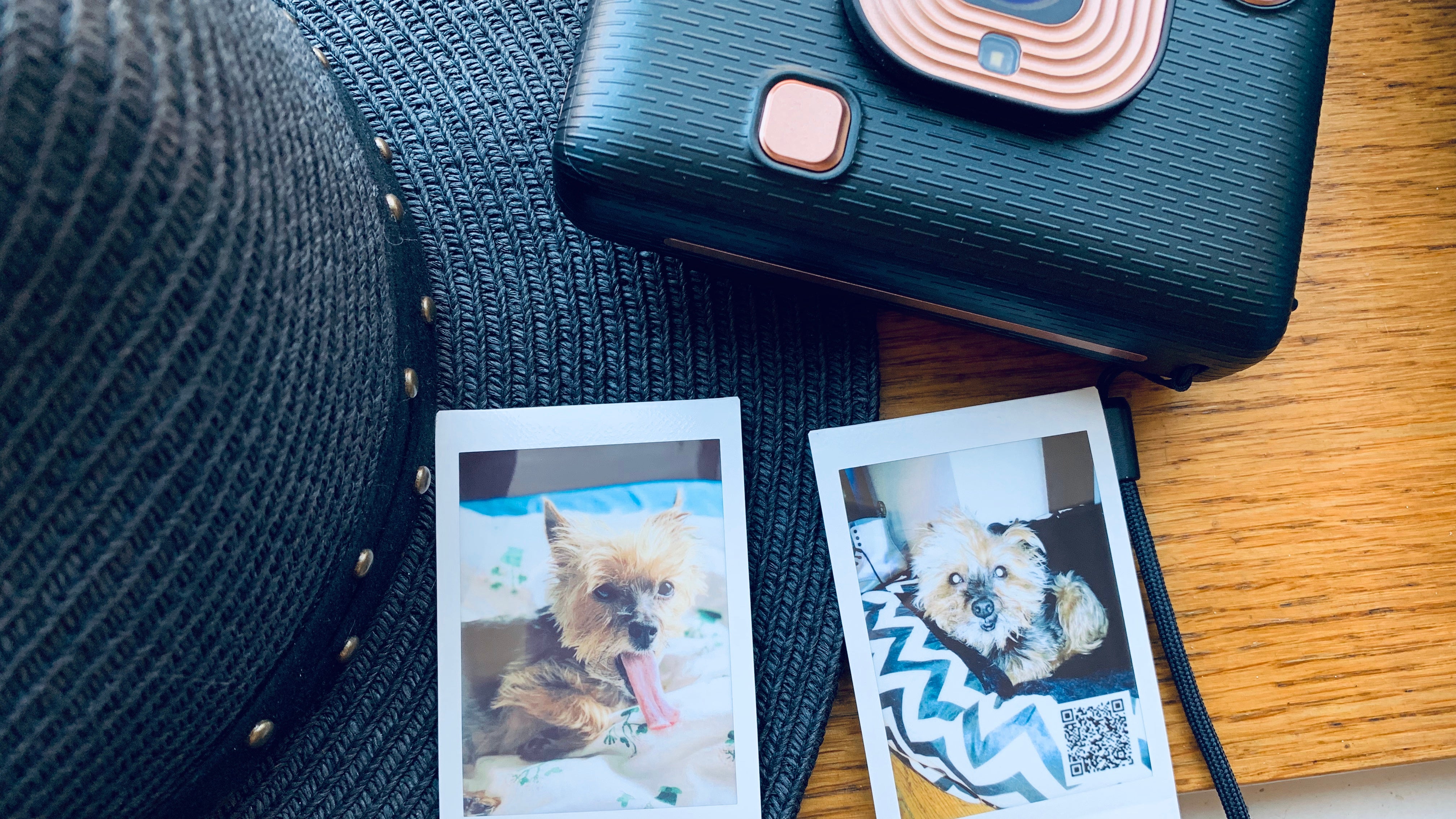 The pic on the left was from my camera roll. The one on the right was taken with the LiPlay. One is clearly better, but less candid, than the other. (Photo: Victoria Song/Gizmodo)

There are a few other features on the LiPlay that are also heavily Instagram inspired. You can pick from 30 filters and six frames. It’s weird because you’re adding a filter so the photo you’re taking on an instant camera looks like a photo taken on an instant camera. Via the app, you can also use your phone as a remote for the perfectly posed group shot—God forbid the squad look less than luminous. Everything about the LiPlay is geared to be an aspiring influencer’s best friend.

But is that a bad thing? Not necessarily. There’s a lot the LiPlay gets right. As I said earlier, using low-tech instant cameras gets old really fast. While filming our instant camera Battlemodo, we had to schlep all the cameras around in a duffel bag and some, like the Lomo’Instant Square Glass, were a genuine pain to use. Not only did it feel like I needed a Master’s Degree in engineering to unfold the Lomo’Instant Square, figuring out which button to press wasn’t straightforward at all. Larger instant cameras like the Polaroid OneStep 2, while retro chic, are awkwardly sized. That alone is enough reason to leave them at home. 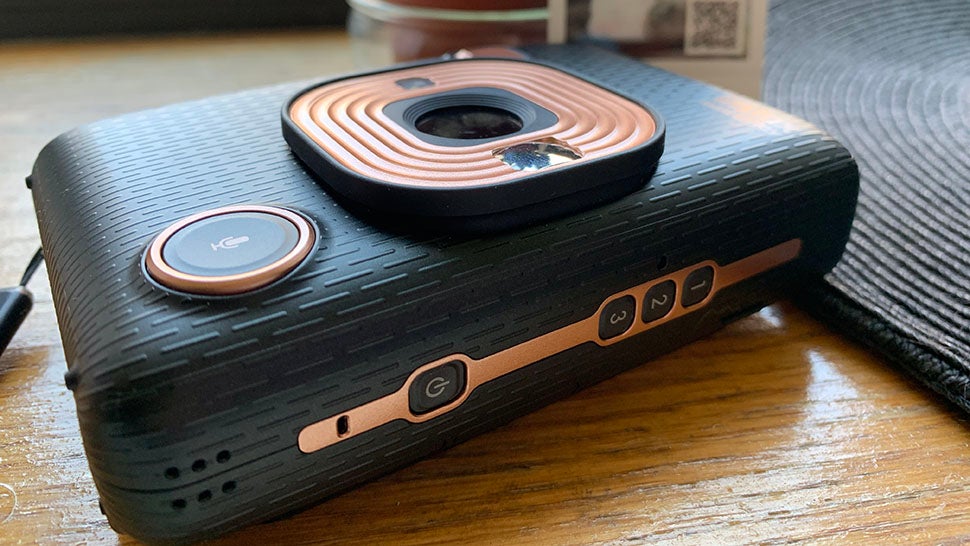 Here you can see the audio record button, the power button, and three shortcut buttons for your favourite filters. (Photo: Victoria Song/Gizmodo)

Conversely, I took the LiPlay with me on a trip to California and never had to take it out for inspection at airport security because it has a similar footprint to my iPhone XS Max (but it’s thicker). Its compact size also meant I could easily stick it in a purse and take it with me to a concert. I don’t have to wonder what buttons I have to press because they’re clearly labelled. Battery life is good enough that I haven’t had to charge it in two weeks. That’s objectively great.

Another plus with the LiPlay is you can print multiples of a photo, which solves a gripe I’ve always had with instant cameras: Who gets to keep the good photo? I happened to snap a great picture of a friend at dinner, and it was easy to print off two copies—one for me, one for her. That’s not something you can do with a typical instant camera.

I’m still perplexed by the audio feature. It’s simple enough—you just press the microphone button on the front, and when you go to print a photo, you’ll be prompted to place a QR code. The only catch is you need the companion app open at the same time to upload the audio. Sure, you could use this to record a special message to a loved one, but it’s more effort than the novelty is worth. I tried snapping an audio shot of my cat meowing, and all I got was ten seconds of ambient noise and me fake meowing in attempt to get him to do the same. I couldn’t delete the audio, or record a separate audio clip to print with that specific photo, so now I’m just stuck with my failure. Though, I guess you could say that’s the most traditional instant camera experience I had with the LiPlay. 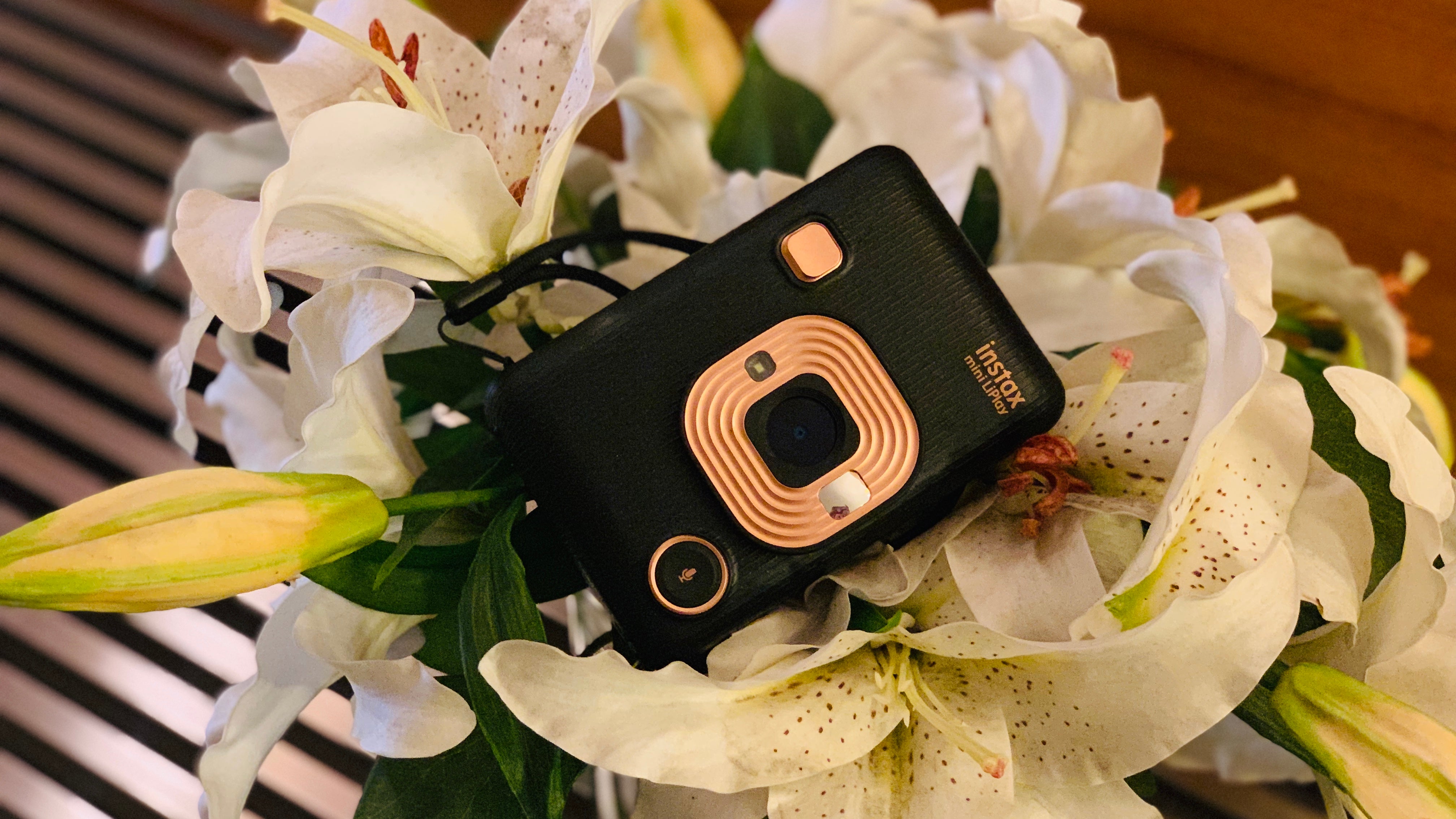 It’s a bit chubby, but size-wise the LiPlay is about the size of a smartphone. (Photo: Victoria Song/Gizmodo)

For the average person, the LiPlay is probably the instant camera that makes most financial sense. While it’s on the pricier side at £150—you can find the Instax Mini 9 on Amazon for around £70—its convenience and portability pay off in the long-run. You’ll never waste film with the LiPlay. It also uses Instax Mini film, which you can frequently find on sale on Amazon for an average price of less than £1 per photo. You’re also getting two devices for the price of one since it can double as a printer for your smartphone pics. Lastly, because it’s easy to carry around, you’re more likely to take it with you, and as the saying goes, the best camera is the one you have on you. In a way, it’s the most practical instant camera I’ve ever used.

And for me, that’s part of the problem. Instant cameras aren’t supposed to be utilitarian! They’re supposed to be spontaneous and whimsical. The LiPlay felt like a semi-analogue extension of social media, and the more I used it, the more I felt my curation instincts kicking in. There was no fun in waiting for photos to develop—I knew exactly how they were going to turn out. Instead, I spent more time stressing about getting a shot worthy enough to print. I’m sure some will continue to embrace fiddly retro gadgets and all their quirks. I have a hunch the rest of us have become image-obsessed monsters who would gladly trade imperfection for the type of control the LiPlay offers. That fits with how Instagram has changed my approach to personal photography—throw crappy shots into my Stories for the giggles and only post glamour shots on my feed. But maybe that’s just how photography is now. Maybe I’m a grumpy old biddy who’s wildly out of touch for expecting any degree of authenticity from an instant camera. Maybe the LiPlay is a roadmap of how instant cameras will evolve. At a certain point though, using the LiPlay stopped being fun. And what’s the point of if it’s not fun?