This honestly might be the best thing to come out of Solo: A Star Wars Story, given the movie managed to kill off most of the other good things about it.

Hot Toys has revealed a surprising addition to its line of incredibly detailed (and incredibly pricey) Star Wars figures with an interesting addition to its Solo line: not a Qi’ra, or a Dryden Vos, hell, not even a L3-37. In keeping with the current hype around the 20th anniversary of The Phantom Menace, the company has instead chosen to figure-fy Solo’s take on Darth Maul.

And given that Maul doesn’t really do much in Solo beyond add an intriguing fleshing out of his own personal timeline and briefly brandish a holo-lightsaber in Qi’ra’s direction, Hot Toys actually gave its 1:6-scaled version of the character a tonne of cool little extra details. Aside from being a blisteringly uncanny recreation of Maul’s appearance in Solo (where he was once again played by Ray Parker, and voiced by Clone Wars and Rebels veteran Sam Witwer), the figure comes with a bunch of accessories.

There’s the obvious, like the usual array of hands to pose Maul either relaxed or ready to fight, or his lightsaber, and even the seat he sits on in his holocommunique with Qi’ra in the film. But the lightsaber comes with additional blade pieces to replicate it swinging into action, and the chair? Even has space to hold two little hologram figurines of Maul and Qi’ra! They’re all fun, neat little bonuses that help flesh out what otherwise would just be...well, Darth Maul sitting down. Which is hardly exciting. 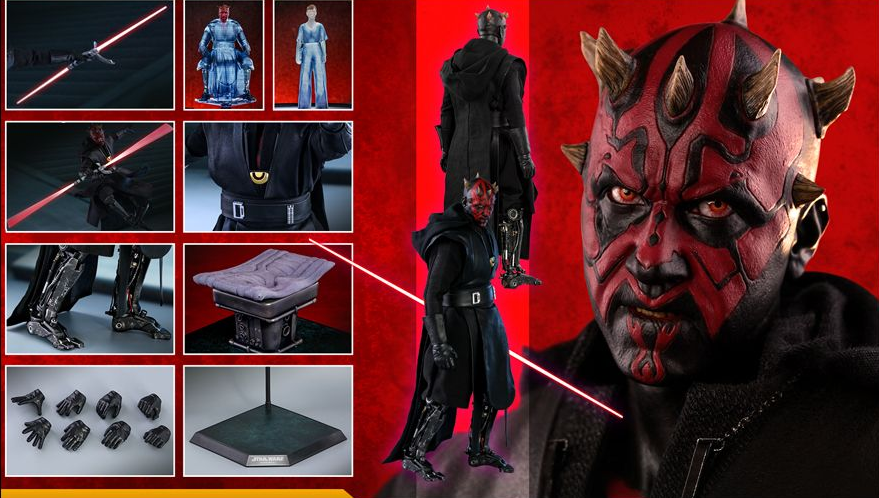 What is, though, is the chance to wonder what might have been, posing this older, wiser, and yet still rage-laden Maul with his lightsaber spinning about his body, ready to fight in a way we’ve never seen the character in live-action since his half-death in The Phantom Menace. Pair it with Sideshow’s also wonderfully lavish version of a post-Revenge of the Sith imagining of an exiled Obi-Wan, and you can almost do a 1:6 scale recreation of the pair’s fateful duel in Rebels.

That is, if you’re willing to plop down the usual few hundred pounds a Hot Toys figure costs, and wait until the end of 2020 at the earliest to get your hands on him.