Sony has been trying to crack a tough nut for the past couple of years. The company wants to translate the tremendous success it’s had making over-ear noise-cancelling headphones and shrink the technology down to something you can put in your pocket. The new £220 WF-1000XM3 represent its latest attempt at miniaturising its excellent noise-cancelling technology. They also represent some impressive progress, and the result is a terrific set of earbuds unlike anything else on the market.

The first thing I noticed about the 1000XM3 truly wireless earbuds is that they’re not that small. The charging case is almost the size of a pack of cigarettes, and the earbuds look like high-tech mutant hunks of caramel corn. That analogy might only make sense to me, but suffice it say that these things are not as small or as sleek as AirPods. I should also point out that the WF-1000XM3 earbuds are in the same product family as the Sony WH-1000XM3 over-ear headphones, and even borrow some design language from that popular model. However, the earbuds aren’t designed to be a smaller equivalent to the over-ear headphones, which have more microphones and more robust noise-cancelling. (To avoid any confusion, I’ll refer to the buds as the 1000XM3 earbuds and the headphones as the 1000XM3 over-ear headphones.)

Part of the 1000XM3's slightly bulky design includes a proximity sensor that, as with the AirPods, turns the earbuds on when you put them in your ears and turns them off when you take them out. In terms of wearing the earbuds, though, size ceases to be a concern.

The earbud itself is about a half an inch long and tucks tightly into your ear canal. The rest of the housing rests outside your ear, though not in a bulky way as with the Bose Soundsport Free. It’s also not an airtight fit, like the Jabra Elite 65t. In my hands-on post for the new Sony earbuds, I pointed out that the slightly loose fit meant that the earbuds struggled to keep out loud noises, like the passing of a train. After experimenting with the fit and different sized silicone buds, I managed to get them just right, and now my life is blissfully silent. 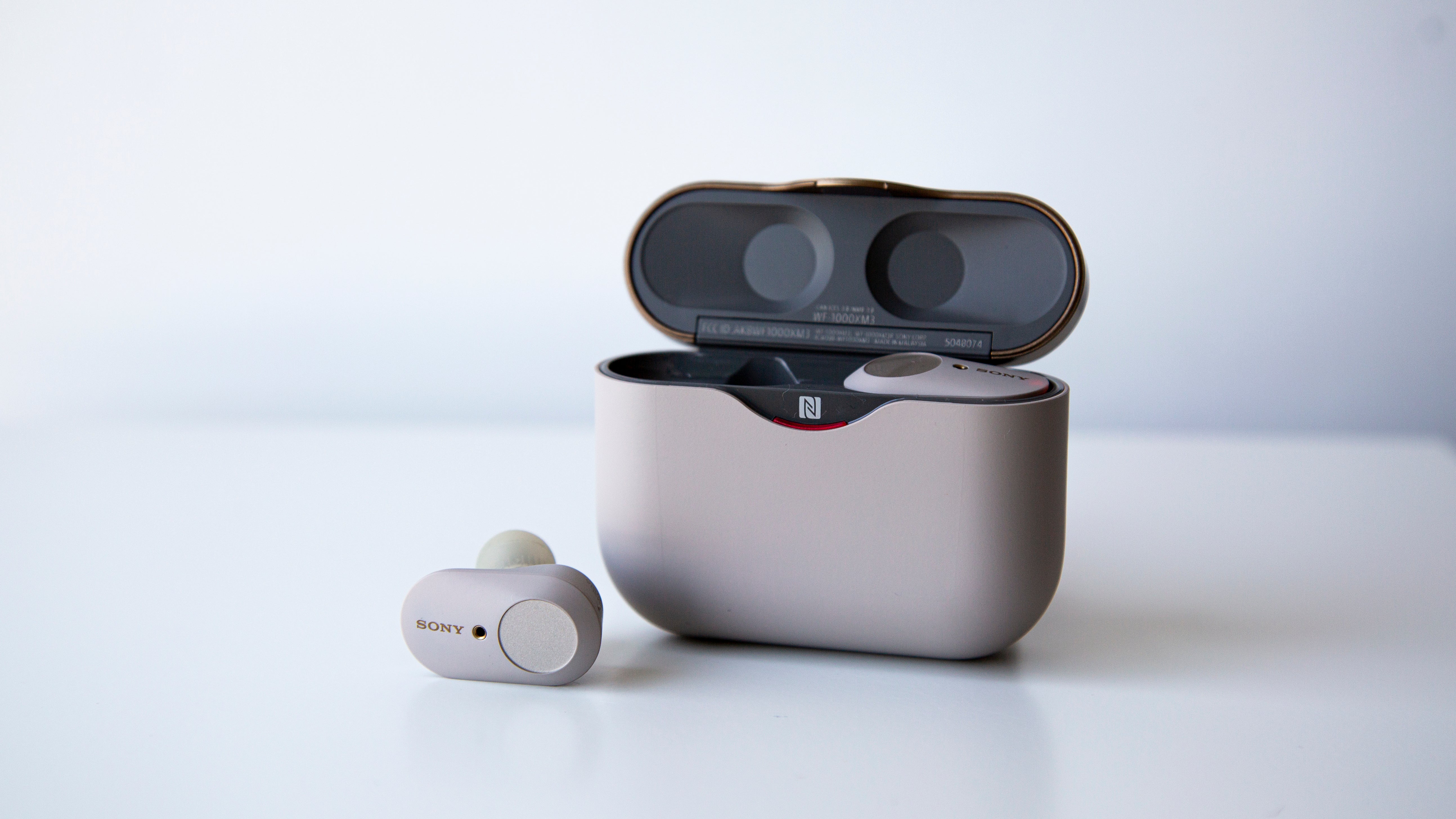 The charging case looks nice, but it sure is big. (Photo: Adam Clark Estes/Gizmodo)

This isn’t Sony’s first attempt at truly wireless noise-cancelling buds. The company released the original WF-1000X earbuds back in 2017, and in my opinion, the earbuds fell short in a few different ways. So in updating the model, Sony engineers told me that they included meaningful hardware upgrades that meant the earbuds inner workings started to resemble the lauded WH-1000XM3 noise-cancelling headphones. Like those over-ear headphones, each of the 1000XM3 earbuds features a dedicated noise-cancelling processor that also works as a digital-to-analogue converter (DAC) and an amplifier. This so-called QN1e chip also lets the earbuds communicate with your device independently, so you can just use one and shouldn’t have to worry about the earbuds cutting out. Finally, there are now two microphones on each earbud that improve not only noise-cancelling but also voice quality on phone calls.

All of this technical jargon seems excessive, I know. However, performance-wise, the difference between the old 1000X and the new 1000XM3 is dramatic. The noise-cancelling is good enough that, when I’m wearing them, people talk to me on the train, and I don’t even realise it. (This is often a good thing on the train.) My sometimes bustling office also becomes silent when I crank up the noise cancelling to max. Tapping the left ear bud lets you switch to Ambient Sound mode, which is convenient if someone’s trying to talk to you while you’re wearing the earbuds. Meanwhile, the Sony Headphones app has a slider that lets you adjust the noise-cancelling even more. I’m not sure I would need stronger noise cancelling than what the 1000XM3 earbuds offer, except if I were on an aeroplane. I didn’t get the chance to test the earbuds on a plane, but I know they can’t adjust for atmospheric pressure like Sony’s 1000XM3 over-ear headphones.

I don’t mean to oversell the 1000XM3 earbuds’ noise-cancelling capabilities, in general. They’re not as good as a lot of the over-ear noise-cancelling headphones I’ve tested. Over-ear headphones have the unique ability to completely isolate your ears while also using more microphones to process the incoming noise. If you’re looking for absolute silence, you should consider spending the extra money and getting the ear muff-style headphones. The sister product to these buds, the Sony 1000XM3 are my favourite such model, although the new Bose Noise Cancelling Headphone 700s are also excellent. I will reiterate that I’ve never tested earbuds that cancel noise as well as the Sony WF-1000XM3. 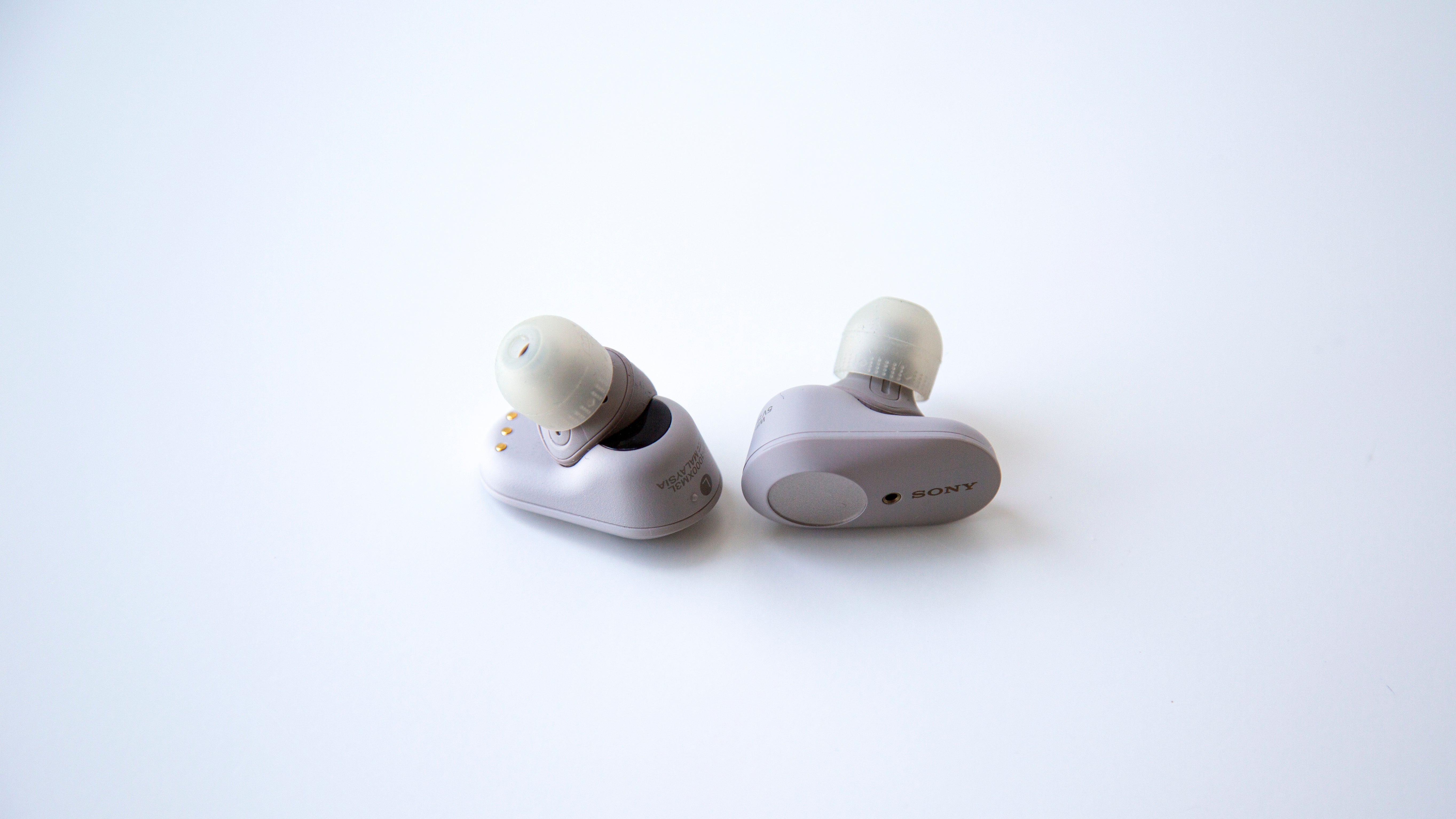 The 1000XM3 earbuds have a proximity sensor on the back, so they turn on when you put them in your ears. (Photo: Adam Clark Estes/Gizmodo)

Where I think the noise-cancelling on the new Sony earbuds really shines is in sound quality. When the distracting din of the outside world calmed down, the earbuds do a terrific job with audio fidelity, producing a balanced and detailed experience. The fast-paced percussion and piano on “Bad Man’s Song” by Tears for Fears sounds lively and precise. The glitch-pop classic “Such Great Heights” by Postal Service feels throaty and dreamy at the same time. For a Sony product, the bass response is pleasantly constrained, which I appreciated on “rockstar” by Post Malone. And while the tuning is great out of the box, the equaliser controls in the Sony Headphones app are handy. I should also mention that the 1000XM3 earbuds do not support the apt-X or LDAC codecs, which might annoy some audiophiles out there.

As many nice things as I have to say about the new 1000XM3 earbuds, I’d stop short of making these my daily headphones. For one, Sony makes no claims of waterproofness, so I wouldn’t feel great about wearing these at the gym. (A Sony engineer did say they’d probably be fine after exposure to some moisture, but I wouldn’t risk it with the £220 price tag on these things.) I’m also not crazy about the touch controls on the outside of each earbud. One tap should play or pause your music or adjust the noise-cancelling—you can program them to do a few different things—but I don’t think the touch surface is responsive enough. It seems like there’s a half-second delay any time I tap them.

There’s also something going on with the connectivity of the earbuds. Like other Sony wireless headphones, they can only connect to one device at a time, which gets irritating if you’re like me and constantly switching from a phone to a laptop. I’ve also noticed that both earbuds don’t seem to connect to a device at the exact same moment. So when I take the earbuds out of the case and put them in my ears, they turn on and connect at slightly different times. I know this because the robotic Sony voice that tells me I’m connected in each ear as soon as the proximity sensor recognises that I’ve put them in, and I never put them both in simultaneously. Once I’m connected, though, everything seems to work great, and the earbuds seldom cut out. Sony could fix something like this in a software update, but for now, it’s just a little bit annoying. 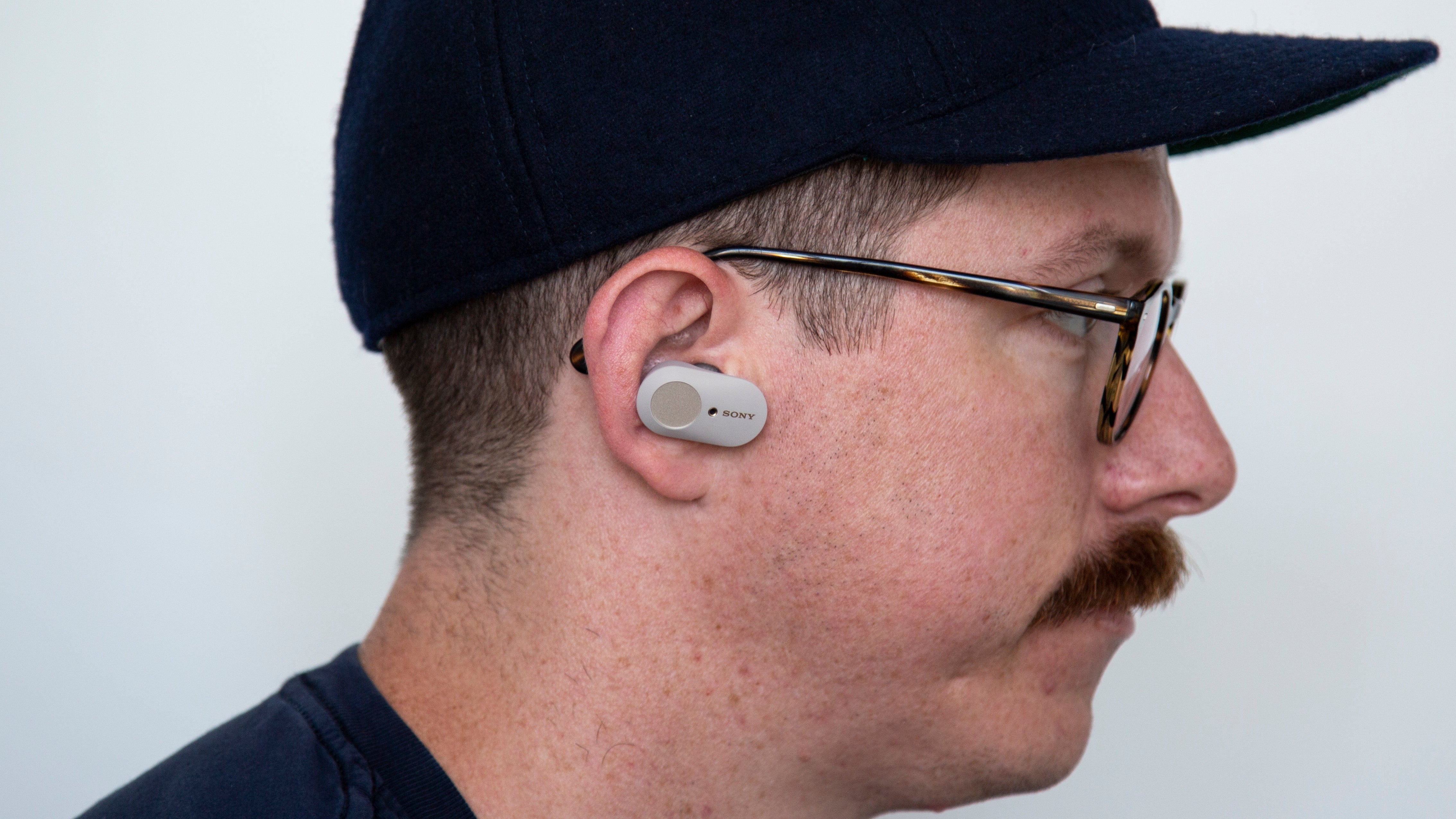 Then again, truly wireless earbuds can be an annoying gadget. The form factor is still incredibly new and even futuristic when you think about it. Sony is moving the ball forward by offering really effective noise-cancelling, and that would typically be enough to impress me. The fact that the 1000XM3 earbuds are so slick—they turn on when you put them in your ears and feel comfortable when you’re wearing them—makes me feel like Sony built something special with this model.

That £220 price point is special too. Sure it’s more expensive than £160 AirPods, but the AirPods don’t have noise-cancelling. If you’re a true audiophile, you might be willing to spend £280 on the Sennheiser Momentum True Wireless, which have incredible sound quality. But the Sony earbuds also sound great. As I just said, as impressive as they are, I would stop short of making the Sony 1000XM3 earbuds my daily drivers. I’m just too in love with my £170 Jabra Elite 65t Actives, which are waterproof. Sony says that the 1000XM3 earbuds are made for professionals and travellers. That makes sense. They look smart, and they cram a lot of great features into a small package. I mean, Sony puts noise-cancelling in your pocket. That convenience alone is enough for plenty of people.