Thanos Nearly Decapitated 2014 Cap and Other Things We Learned From the Writers of Avengers: Endgame

Their names are Christopher Markus and Stephen McFeely and the duo took the stage at Comic-Con to massive applause to talk about writing those movies, especially the one that’s oh so close to being the biggest film of all time.

The panel began with a description of a lost scene from Infinity War where, in the battle on Titan, Doctor Strange was going to send Thanos through a mindscape where he’d be faced with all his past crimes and, ultimately, be put up in front of the Living Tribunal, who would judge him guilty. The scene was apparently shot but cut from the scene because detouring a big fight for an LSD trip slowed it down too much.

Next, the writers were asked about a memorable note that Marvel Studios president Kevin Feige gave them. And the first thing that came to mind was “Stick the landing.” Markus explained that Feige said no matter what they had to do, cut characters, make it shorter, longer, didn’t matter. Just stick the landing like Mary Lou Retton did in the Olympics. That’s why the films, when under the code name “Mary Lou” and, after they came out, Mary Lou Retton herself actually filmed a clip for the Marvel executives where she congratulated them. McFeely has it on his phone and showed it to the audience.

Their darkest moment working on the movies was in mid to late 2016. They’d been working on the stories for several months and but no one liked the result. “The Thor storyline sucked rocks,” McFeely put bluntly. What they had was “too adventure related but insufficiently character-based,” said Markus. So, the story of Thor as it is now all came out of an all hands on deck meeting where they felt real pressure.

“Five years later.” The words were a massive reveal in Endgame and the writes explained that it really cemented the power of the story. It really put the characters through something. Plus, it allowed them to really put the original Avengers into a complex story because they knew a few of them would be dying, so it was a nice way to send them off.

Another plus of that was it was able to fix a mistake they made. Originally, in Infinity War, Hulk became “Smart Hulk” in the final act and he won a big victory against Thanos’ army. But they realised that was “tone deaf.” Too heroic a moment too late in the movie where everyone was about to die. So, it got cut. But...they’d already shot Endgame where he was Smart Hulk throughout the film. So they had to fix it’s beginning before the jump and then the jump made the footage that was shot work.

Things then got into the time heist. The writers talked to physicists about it and their main take away from that research was a line in the movie: “Back to the Future is bullshit.” The physicists explained the idea of one timeline is probably not how it would work. It would have branch realities. And that’s why they did it that way.

Of course, this was all very difficult to figure out so, the writers presented this photo, taken after Comic-Con 2016, where they were trying to figure out how it was all going to work.

Check out how the team behind Endgame and Infinity War worked out the time heist. pic.twitter.com/hlk7xaTC44

With all this talk of time travel and alternate timelines, could there be a multiverse? “It clearly exists,” McFeely said. “Doctor Strange has talked about it.” But how, or if it will come into play in the MCU, they don’t know. “I don’t know what Kevin Feige is going to do tomorrow,” he said. But, they said the idea of being able to just pull more Tonys or Natashas from other timelines doesn’t help stakes.

Moving on, they mentioned there was a scene in Endgame that got cut of Rocket explaining the quantum realm to scientist, Jane Foster, but again, that was cut. But they said Jane was very very interested in what Rocket had to say.

Having written The First Avenger, Markus and McFeely were excited to bring the Red Skull back into the universe. The idea came when they were brainstorming for the films and realised he was still alive and had some kind of connection with the stones. The never wrote a reunion with Captain America when he returns the stone, but they had an idea that maybe Cap had to collaborate with him because he knows so much about the stones. But again, that was just an idea, and never even written. 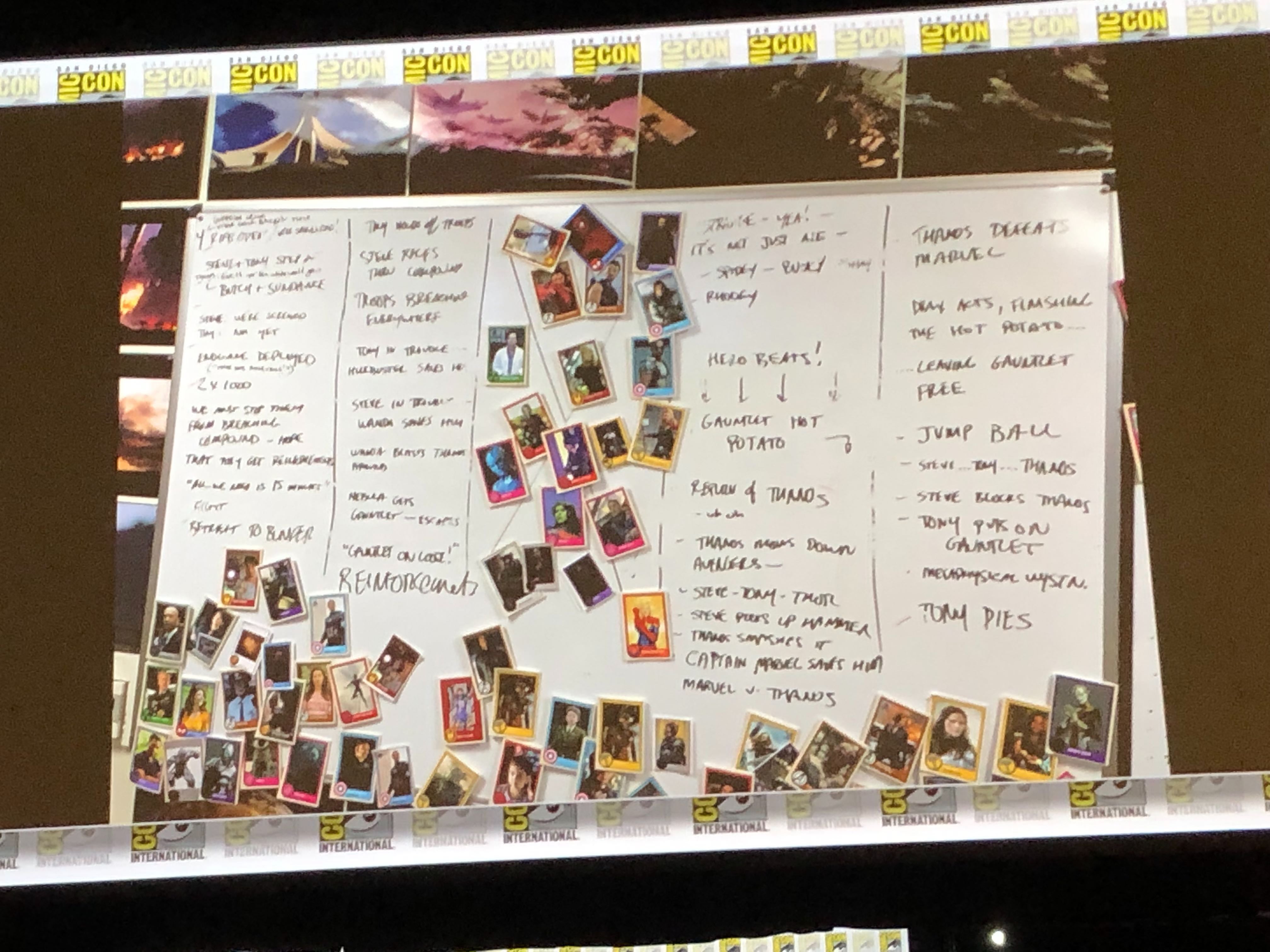 A higher resolution pic of the timeline for the Stones pre-heist.Photo: Germain Lussier (io9)

While trying to figure how to bring back Thanos after killing him in the first act, there were versions where Thanos returned with the head of dead Captain America from around 2014 to intimidate the Avengers in 2023. Apparently this gets explained more in the commentary track on the upcoming Blu-ray.

Finally, it came down to two of the biggest question from the movie. Are there two Captain Americas on Earth at the end of the film? “Pass,” says McFeely jokingly. And Markus asked “I’m entertained by that theory.” As to the whereabouts of Gamora, they wouldn’t say, but think it’s plausible that she just left at the end to go be on her own and that that’s a story they’d love to see explored in the third Guardians movie.

The panel was moderated by Jeff Goldsmith, the publisher of Backstory Magazine and host of The Q&A with Jeff Goldsmith podcast where you can hear this full Avengers: Endgame interview starting Saturday, July 20. And you should. It was a great conversation with much more than even we could summarise here.

Avengers: Endgame is still in cinemas and hits digital July 30th and Blu-ray on September 2nd.