The Real Punisher Wants Police to Stop Pretending They're the Punisher

Despite the many heroic things he’s done over the years in Marvel’s comics, Frank Castle is, at his core, a particularly deranged vigilante whose sense of justice is so extreme that the proper superheroes he often crosses paths with see him as a more of a problem than an ally.

Even the character’s creator, Gerry Conway, has gone out of his way to explain that the Punisher isn’t meant to be the kind of person people look up to. He’s a symbol for a very specific kind of brokenness that, when left unaddressed and untreated, can metastasize into an existential cancer with horrific emotional and psychological outcomes. The way the Punisher’s use of firearms evokes the imagery of mass shootings has made it impossible for Marvel to ignore that the character’s taken on a larger life outside of comic books where people, especially those in the armed forces and police service, make him out to be a symbol that represents them.

But in this week’s Punisher #13, from writer Matthew Rosenberg, artist Szymon Kudranski, and colourist Antonio Fabela, Frank Castle takes a moment to let the boys in blue know precisely how he feels about their belief that they are like him.

Because he isn’t busy sleeping or brooding, Frank Castle is on the hunt, this time for a very in-the-wind Baron Zemo who’s evading Frank’s detection by bouncing around New York City.

After coming into some much-needed information about what Zemo’s up to, Frank ends up walking through a dark alley at night and being suddenly accosted by a squad of police officers who, after a brief moment of alarm, are stunned that they’re meeting the Punisher. Rather than questioning him about the copious amounts of blood he’s still covered in from his last brawl – whose blood is that, Castle? Why are you drenched in it?, etc. – the men instead whip out their phones and ask to take selfies to share with their group of Punisher fancops within the force. 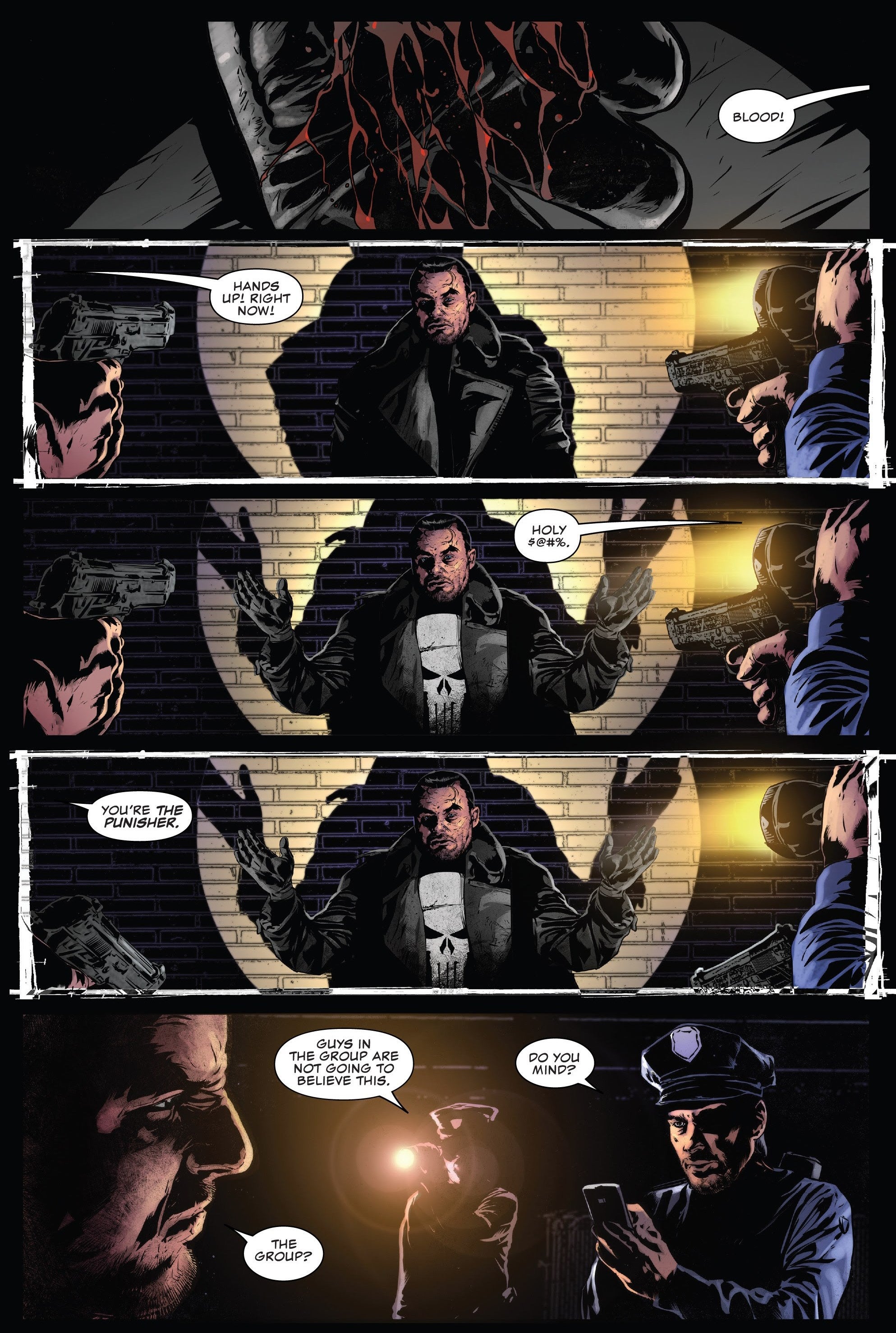 After a very awkward beat, Frank rips the Punisher decal from their patrol car and begins to patiently explain that whatever the hell they think they’re playing at, running around fancying themselves to be like him, is fucking immoral and unlawful. The cops warn Frank that by burning them, he’s losing some much-needed supporters. But he’s nonplussed and wants them to know that he means it when he tells them that he’ll kill them if they don’t cut out their weird worship. Unlike police officers, who swear to protect the public by upholding the law (even though they often do not), Frank Castle is a vigilante – which is to say, a person operating outside of the law.

You can try to get into all kinds of semantical detours about all vigilante superheroics qualifying as lawbreaking, and how that somehow makes the Punisher’s actions fair game for a hero. But the reality is that Frank Castle, as a character, is an idealised, hyper violent embodiment of a kind of unaddressed rage. Frank Castle doesn’t just “stop bad guys”, he murders people. He tortures them in gruesome, horrific ways unbecoming of any hero, let alone a police officer, and Marvel’s other heroes tolerate him because they are all comic book characters and not real people.

This isn’t something that should have to be explained, and yet. And yet.