Training sucks, especially if you’re a newly reformed couch potato. Your options are shell out for a trainer or gym membership—or cobbling together an ad hoc regimen with the help of apps, subreddits, a fitness tracker, and dubious YouTube personalities very keen on selling you their workout packages. The Polar Ignite is a casual fitness smartwatch dedicated to splitting the difference.

What is it?: A casual fitness smartwatch with lots of on-wrist guidance
Price: £175
Like: Tells you what type of exercise to do based on your recovery and fitness levels
Don't like: Finicky syncing. Touchscreen not as responsive as I'd like.

The Ignite comes with all the baseline features you expect from a fitness-oriented smartwatch, like activity tracking, built-in GPS, heart rate monitoring, sleep tracking, and multi-day battery life. The main difference is the Ignite also has on-wrist guidance for what exercises you should be doing day-to-day based on how well you slept, and your body’s current fitness level. While most fitness smartwatches claim to do some version of this, the Ignite presents it in a much more digestible format, with actionable recommendations. At £175, it’s not cheap—but compared to other smartwatches in the same price range, it’s a surprisingly good investment for newbies overwhelmed by the work that goes into building a training regimen.

Here’s a rundown of how the Ignite’s guidance works. The first aspect is its Nightly Recharge feature. Once you unbox and charge the watch, you need to wear it for three full nights of sleep for it to establish a baseline. After the third night, it’ll give you a readout of your ANS (autonomic nervous system) charge and sleep quality, which together will determine how well rested you are. Your sleep quality is presented as a score out of 100 based on a rolling 28-day average of sleep duration, time spent in various sleep stages, and how often you woke up during the night. ANS charge is a tad more complicated.

Your ANS charge is a set of heart-related metrics that Polar has lumped together to estimate how well your body’s autonomic nervous system has recovered from yesterday’s stressors. During the first four hours of sleep, the Ignite will measure your average heart rate, heart rate variability (HRV), and breathing rate. It’ll then compare these metrics to the baseline calculated on your first three nights of sleep, and spit out a number between -10 and +10 to indicate how ready you are to train on a given day.

If this sounds like pseudoscience, that’s because it kind of is. Your heart rate and heart rate variability are, in fact, controlled by your autonomic nervous system. According to Harvard Medical School, your HRV can indicate how quickly your body calms down after experiencing stress. Basically, a low HRV means you’re in fight-or-flight mode and probably won’t perform as well during a workout. A higher number suggests better cardio health, and that you’re ready to take on more intense activity. But while this may be fundamentally true, the Polar Ignite is not a medical device, and Polar hasn’t published peer-reviewed scientific findings about these readings and their impact on training regimens. 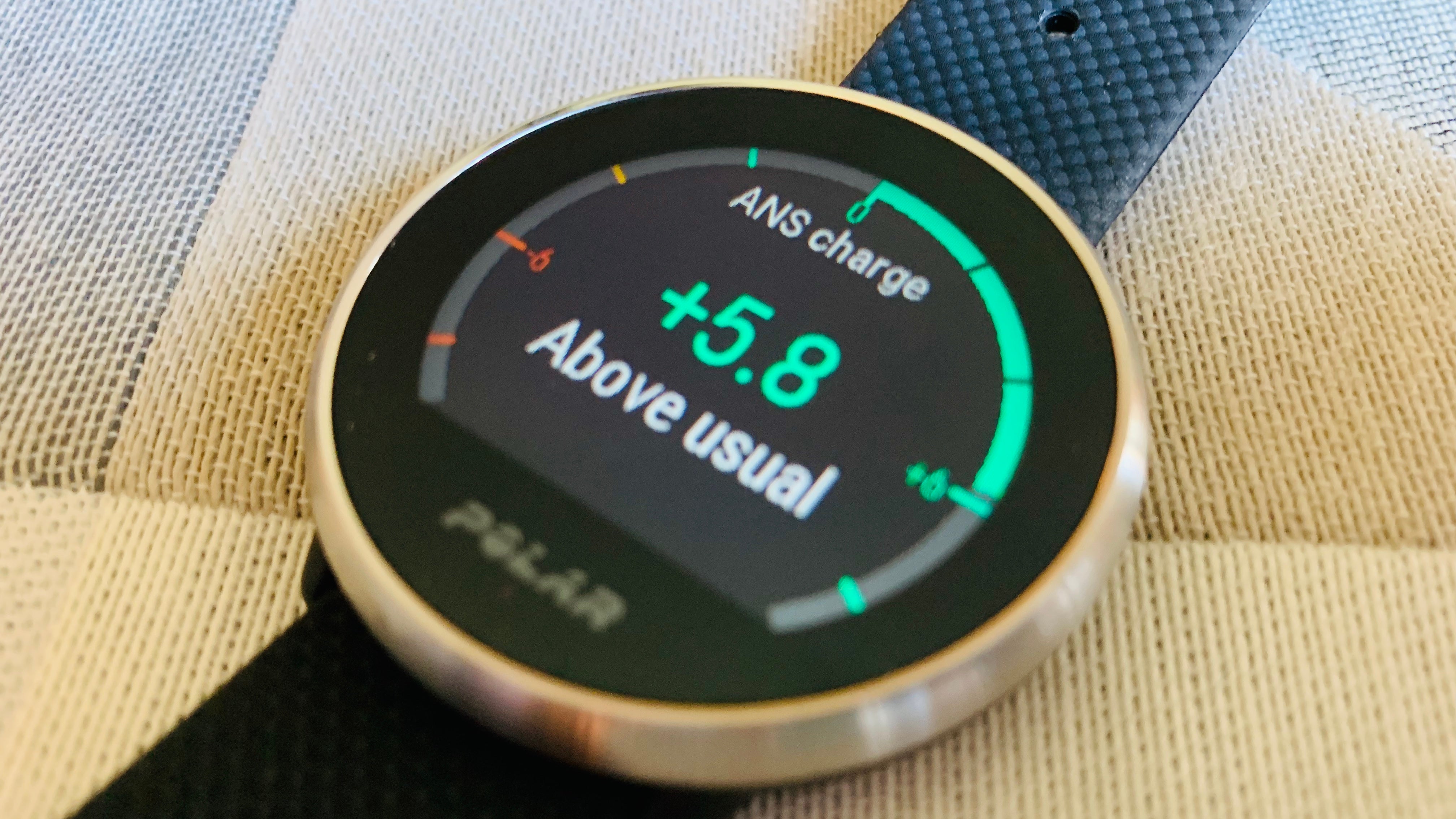 Your ANS charge is made up of three metrics: heart rate, heart rate variability, and breathing rate. (Photo: Victoria Song/Gizmodo)

Going into testing, I was sceptical about this feature. I’ve tested a few trackers that claim to measure how “recharged” you are and found it to be a useless metric. But after nearly two weeks with the Ignite, I’ve found, at least in my experience, the ANS charge—and the overall Nightly Recharge feature—to be a decently accurate predictor of my performance. After travelling out of town for a friend’s wedding, I got a good night’s sleep but a -10, poor ANS charge reading. Because I felt fine, I ignored Polar’s advice to “respect my body’s need to recover” and decided I was more than capable of running two miles. At an easy pace, that’s normally 20-22 minutes of running for me. That day, I was surprised I couldn’t manage more than run-walking the same distance over a half hour. The same thing happened after a long day of travelling back home. With another -10 ANS charge and a poor sleep score of 65, the Polar again advised I “give my body a chance to recover.” However, I stubbornly attempted my weekly 5-mile long run because I hate skipping days and refused to shorten my distance because, well, what did a smartwatch know? To my surprise, I again had a shockingly hard time, crapped out after three miles, and posted my worst time for that distance in months. I’m still not convinced this feature is 100 per cent accurate every time, but it turns out that twice, a smartwatch knew what was better for me than I did. 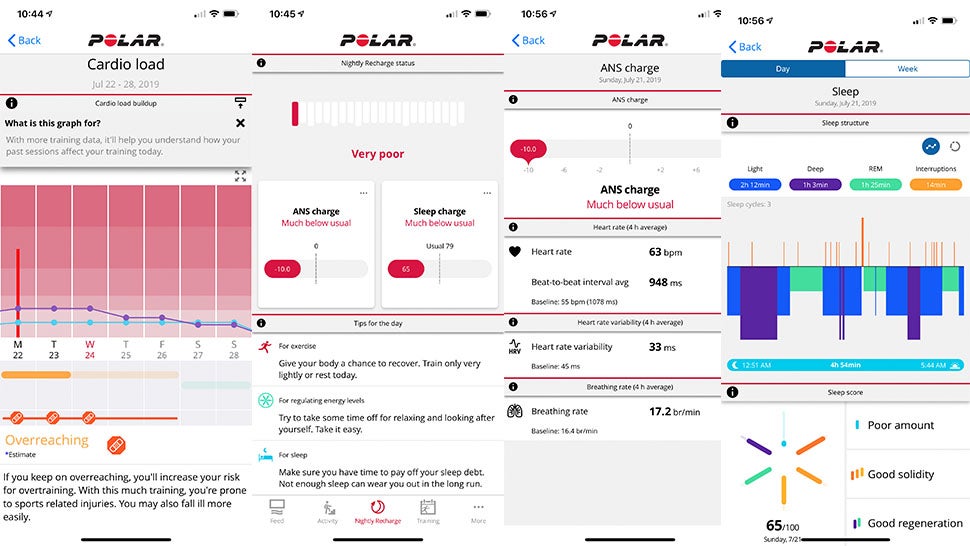 Okay, when I put all the screens together like this, clearly I should have listened and not tried to do a 5-mile run. (Screenshot: Victoria Song/Gizmodo)

Nightly Recharge is only the first half of the Ignite’s guidance features. The other half is what Polar dubs FitSpark. It’s a screen on the watch that based on your Nightly Recharge, recommends what type of exercise you should do on that day. So, if you’ve got a high ANS charge, it might recommend cardio and strength training because you can handle it. On the other hand, if your charge is lower, it might recommend supportive stretching.

To that end, FitSpark lets you choose from a series of preset exercises. There’s a little animated fellow that demonstrates how the exercises work, and the watch automatically tells you when you should move on to the next stretch or movement. You can also tap an exercise to read more detailed instructions on how to do it. This is nice in theory, though in practice, I found it hard to remember what I was supposed to be doing and when. Still, it’s more helpful than not, especially if you’re on the road. 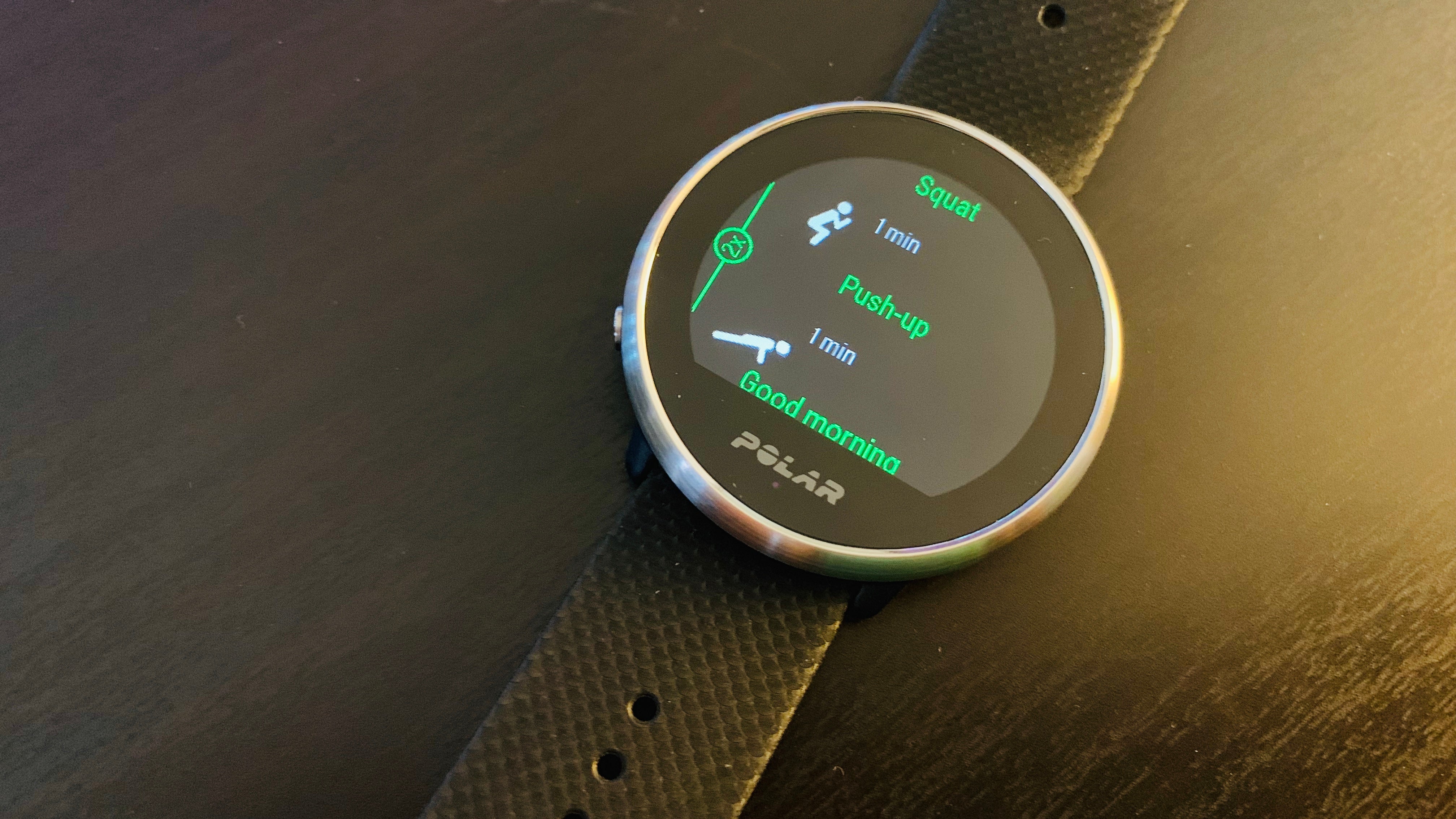 Polar’s FitSpark feature shows you on-wrist what exercises you should do. (Photo: Victoria Song/Gizmodo)

As for accuracy, I found the Ignite to be on-par with the Apple Watch Series 4. For outdoor GPS-runs, both devices over reported distance compared to my phone. That said, the Polar gave more accurate results. For example, on one run, my iPhone recorded a 3.96-mile distance via the MapMyRun app. The same run was logged as 4.17 miles by the Apple Watch, and 4.03 miles by the Polar. This pattern held up over six test runs I did with all three devices. Both devices were also within 5-10 beats per minute during exercise with my Polar H10 chest strap.

As helpful as the Ignite was for tweaking my training, it’s got a few drawbacks. There’s no onboard music storage, so if you want to leave the phone at home, this isn’t the smartwatch for that. Also, Polar’s running watches have always been finicky when it comes to syncing, and the Ignite is no exception. Fitbits and the Apple Watch will automatically sync once you open the companion app—to the point where you don’t really have to think about it. The Polar’s not so good in this regard. Sometimes it synced just fine, but I check my data frequently and ended up manually syncing at least two or three times a day. The process isn’t hard, but it’s clunky for 2019. You hold the back button for a few seconds, keep the Polar app open, and pray Bluetooth doesn’t disconnect over the minute or so it takes to sync. Occasionally the sync fails, and you have to do it all over again.

Battery life was also slightly disappointing. While Polar says you should get up to five days on a single charge, I never got more than three. I do about 2.5 hours per week of GPS running, but I suspect you’ll get more battery life if you mix in some non-GPS workouts. That said, three days between charges is still more than you get with the Apple Watch. 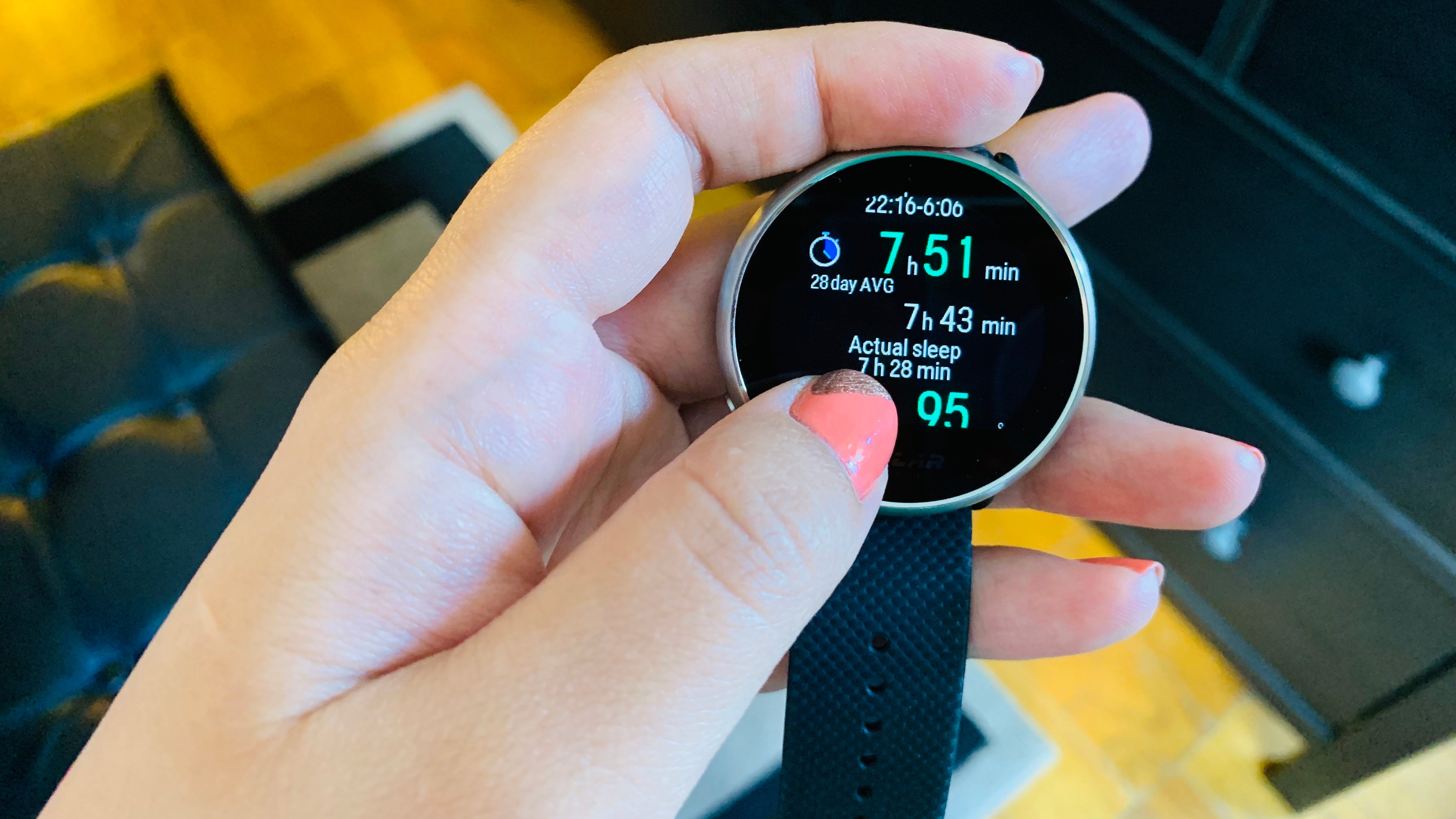 You can see quite a bit of data right on your wrist, though swiping through screens is a bit laggy. (Photo: Victoria Song/Gizmodo)

As for design, the Ignite is fine. It passes for an average watch, and the worst you can say is that it’s boring looking. (Though that could be because I got the plain black version for my review unit.) The main design issue I had was the touchscreen wasn’t quite as responsive as I’d have liked. Sometimes swipes didn’t register and switching between screens occasionally lagged. These weren’t deal-breakers, but mild inconveniences do add up over time.

While the Ignite is one of Polar’s more accessible smartwatches, it’s still not for everyone. It’s probably best suited for someone serious about training for a specific goal, like running your first 5K, but isn’t keen on breaking the bank for some higher-end fitness smartwatches. At $230, it’s a little too expensive to have as many design quirks as it does, but the trade-off is access to much more useful training data. If its finicky syncing and drab design aren’t a huge turnoff, the on-wrist guidance is one of the better thought out offerings out there. I admit I was thoroughly chastened during my time with the watch, and have since learned to take rest days more seriously.