This Hurricane Proof House Made From 612,000 Recycled Plastic Bottles Can Withstand 326 MPH Winds

If you’re looking to build a new home on coastal waters where hurricanes are known to roam, you might want to skip the two-by-fours and cement and instead start drinking bottled soda. A Canadian company has recently completed construction of a home with exterior walls made from recycled plastic, and it’s claimed to be able to withstand winds gusting at over 300 miles per hour.

Built by JD Composites, the three bedroom home is situated near the Meteghan River in Nova Scotia. Aside from a distinct lack of trees, gardens, and neighbours, the house looks like any other dwelling with a clean modern design and a minimalist facade. Inside it’s fully furnished and finished with drywall covered lumber walls, but the exterior is what makes the house appealing as a new, and seemingly much improved, approach to construction.

Wrapping the house, and providing its reinforced structure and extreme durability, are 5.9-inch thick panels made from somewhere around 612,000 plastic soda bottles that were shredded, melted, and then in injected with gas to create a sort of plastic based foam that has several key advantages over more traditional construction materials. They provide better insulation in both the winter and summer months, they’re moisture and mildew resistant, they help keep plastics out of waste facilities, and they allow a house to be assembled in a matter of days, not months, because the panels are first created offsite and assemble like a giant puzzle. 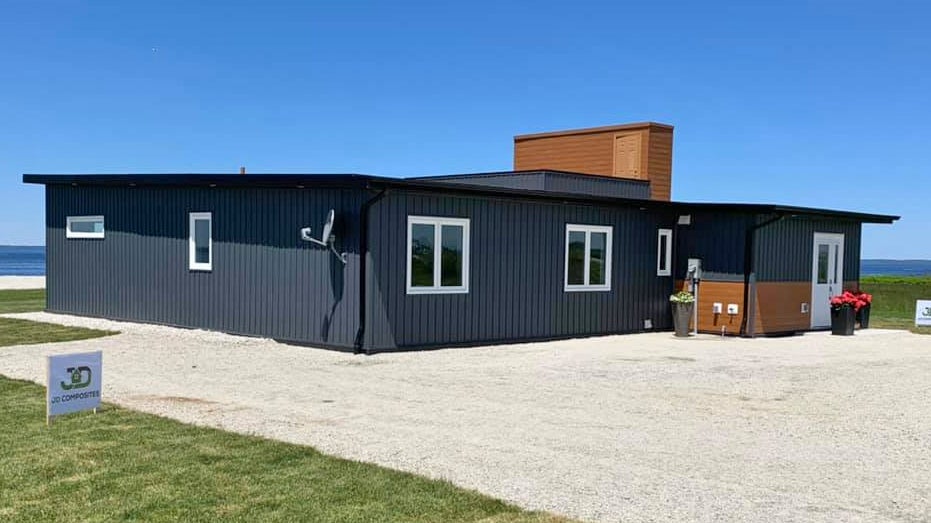 But it’s the extreme durability that intrigues many home builders, particularly those who work along the eastern coast of Canada and the United States where hurricanes pose a major threat every year. Samples of the plastic panels were sent to a certification facility who subjected them to conditions similar to what would be experienced in a category 5 hurricane. For comparison, in 2015, hurricane Patricia pummelled Guatemala with winds measured as fast as 215 miles per hour. It was considered to be one of the most powerful hurricanes ever recorded, but JD Composites’ panels were able to survive wind speeds up to 326 miles per hour in testing, and possibly even stronger, as the testing facility actually maxed out its wind tunnel’s capabilities.

It’s estimated that the house cost somewhere around $400,000 CAD (£244,000) to build, which is on par with traditional material and labour costs. But the durability of the plastic means there’s less repairs down the line, and the potential for avoiding a complete rebuild should a hurricane strike. It’s actually up for sale now if you’ve got plans to move to Canada, but if the builders can’t find a buyer they plan to list the property on Airbnb which should help spread the word about their accomplishment.