Two years after a mysterious cloud of radiation swept through Europe, a team of scientists has pinpointed the source of the leak to a nuclear reprocessing plant in Russia, which was preparing materials for an Italian physics experiment at the time.

In early October 2017, a cloud of radioactive material swept through Europe. Monitoring stations from across the continent reported an apparently sizeable release of radioactive ruthenium-106, though not at levels deemed dangerous to human health. The leak was attributed to a large nuclear accident of some sort, but the source of the radioactive cloud remained a mystery, as no country or facility took responsibility.

Soon after the incident, the French nuclear safety institute pinpointed the source to a nuclear facility in either Russia or Kazakhstan, with the Mayak nuclear complex in the Southern Urals being the most likely culprit. Russia denied the accusation, saying no radioactive soil samples could be detected in the area surrounding the Mayak facility. Instead, Russian officials blamed the episode on an unidentified satellite that burned up on atmospheric re-entry, resulting in the release of radiation from its radionuclide battery. A pair of inquiries held by the Nuclear Safety Institute of the Russian Academy of Sciences could not verify the source of the leak, citing insufficient data.

A new study published in Proceedings of the National Academy of Sciences is now claiming to have closed this data gap, providing new insights into the 2017 incident. The investigation was led by researchers from Vienna University of Technology’s Institute of Atomic and Subatomic Physics, and it involved nearly 70 experts from around the world. The work “presents the most compelling monitoring dataset” of the radioactive leak, according to the paper. The research included over 1,300 measurements of radioactive ruthenium-106 taken from monitoring stations in nearly 30 countries.

Analysis of the data suggested a release of radioactive ruthenium from 25 to 26 September over a period of about 18 hours. The authors described it as a “pulsed release,” which happened very quickly (by contrast, accidents at Chernobyl and Fukushima involved leaks that happened over the course of days). The first detection of radioactive particles came on 2 October 2017 in Milan, Italy, followed by detections in the Czech Republic, Austria, and Norway later that same day. Rates of radioactivity were measured to be between 1 and 10 millibecquerels per cubic metre of air. This “widespread detection in such [a] range immediately suggested a considerable release,” noted the authors in the new study.

Indeed, it’s now considered the “largest singular release of radioactivity from a civilian reprocessing plant,” Georg Steinhauser, a co-author of the new study and a professor at the University of Hanover, said in a press release. The leak wasn’t caused by an accident at a nuclear power plant, which would have produced a wide variety of radioactive materials instead of just one. This incident was unusual in that it exclusively involved ruthenium-106, which strongly hinted at a nuclear reprocessing plant as the more likely source. Radiation leaks can happen when nuclear fuel is reprocessed. 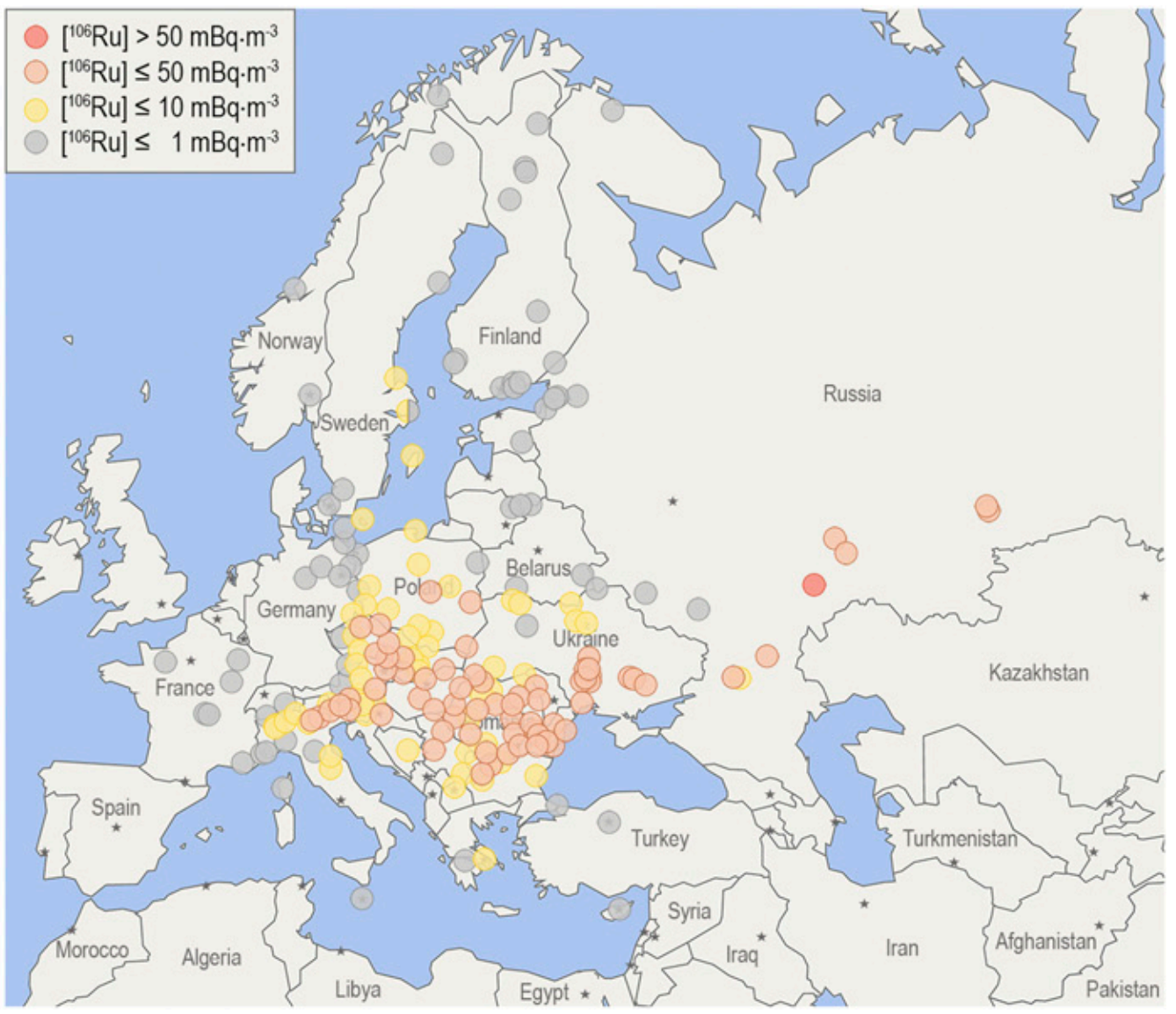 The highest levels of radiation detected reached 176 millibecquerels per cubic metre of air, which is around 100 times higher than concentrations measured in Europe in the wake of the Fukushima accident. The geographic extent of the leak was sizeable, with monitoring stations reporting unusual levels in Central and Eastern Europe, Asia, the Arabian Peninsula, and even the Caribbean.

The total release was estimated to be between 250 to 400 terabecquerel of ruthenium-106. By comparison, the 1986 Chernobyl nuclear disaster released around 5.2 million terabecquerel, while the 2011 Fukushima disaster produced around 900,000 terabecquerel.

Consistent with the earlier reports, the authors attributed to the source of the leak to the Russian Mayak nuclear facility in the Southern Urals. The researchers “were able to show that the accident occurred in the reprocessing of spent fuel elements, at a very advanced stage, shortly before the end of the process chain,” said Steinhauser. “Even though there is currently no official statement, we have a very good idea of what might have happened.”

Thankfully, ruthenium-106—a radioactive nuclide that’s produced during the splitting of atoms in a nuclear reactor—is one of the friendlier radioactive isotopes, with a half life of 374 days, making it useful in research settings. Interestingly, the researchers learned that an Italian research facility had ordered materials from Mayak prior to the incident in preparation for a neutrino experiment.

Importantly, the researchers ruled out a crashed satellite as a possible source of the radiation, saying no satellite went missing during this time period, and that a satellite was unlikely to introduce radioactivity to such an extent over the affected low altitudes, among other factors. Romania, which recorded some of the highest levels during the incident, was also ruled out as a source of the radioactivity on account of its geography and weather patterns observed at the time.

The alleged incident at Mayak is not the first to happen at this plant. During the Kyshtym Disaster of September 1957, a tank containing liquid waste from plutonium production exploded, causing serious local environmental contamination. It’s rated as the second worst nuclear disaster after Chernobyl, with even the 2011 Fukushima disaster ranking behind it.

That no country or nuclear facility has admitted to this incident is obviously very troubling. Nuclear accidents—no matter how small—need to be reported given the potential consequences to human health and the environment. Sadly, it appears that Russia has learned little since the Chernobyl accident, in which the Soviet government dithered for two entire days before it acknowledged the catastrophic meltdown to the world.