A New Processor Means Fossil's Smartwatches Might Be Getting Good

Remember when we were all hopeful that Qualcomm releasing the Snapdragon Wear 3100 chip would mean better, faster, longer-lasting Wear OS wearables? Well a year on, turns out it was just a dream as most Wear OS watches are still running that busted old 2100 chip. But today, Fossil is launching its Gen 5 smartwatches—all powered by the 3100, and featuring some new battery modes, a swim-proof speaker, and beefed-up heart rate tracking.

The Gen 5 smartwatches are basically all the same spec-wise, with some light stylistic tweaks and colourways, as per Fossil tradition. For £280, you’re getting a 44mm case with a 1.3-inch touchscreen, along with water resistance up to 3ATM. (Technically 5ATM is what you’re looking for if you want to hop in the pool, but 3ATM should be fine for showers, dishes, and other mostly wet activities.) For sensors, you get the usual suspects: NFC, heart rate, altimeter, accelerometer, ambient light sensor, microphone, and built-in GPS.

The main thing is this is Fossil’s first flagship smartwatch to run on the 3100 chip, which translates to much-needed updates. First off, with the Gen 5 watches, Fossil is introducing several battery modes—a welcome addition given the godawful battery life on 2100 watches. Fossil is now offering four presets that trade various functions in exchange for battery life. For instance, the new Extended Battery Mode will purportedly get you multi-day battery life while still getting notifications and heart rate data. You can also tweak battery optimisation yourself in a Custom Mode, while Time-Only Mode is meant to shut off all features except for time if your watch is on its last legs. You can also choose to just use your smartwatch as normal in Daily Mode, though that will probably only get you about a day’s worth of use on a single charge. 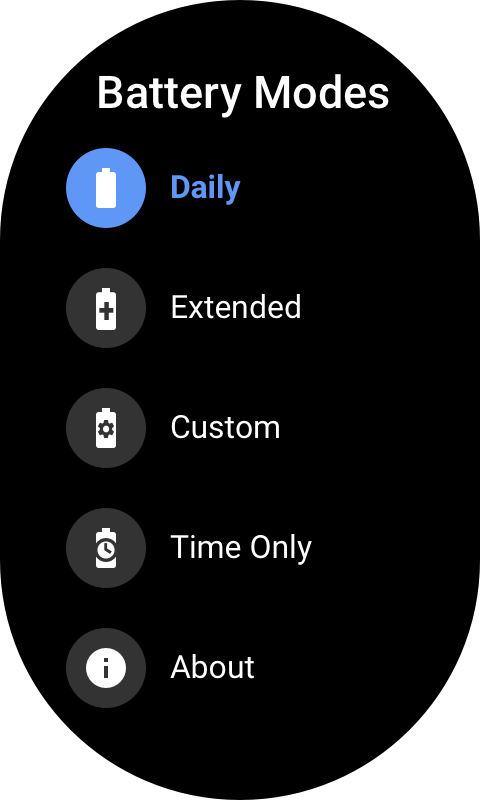 Longer battery helps, but this is mostly a move to mask some of Wear OS and the Snapdragon chip’s weaknesses. (Image: Fossil)

Another upgrade coming to the Gen 5 watches is a swim-proof speaker. According to Fossil, this will let users interact better with Google Assistant on the watch itself. Fossil also says it’s developed some proprietary tech to let iPhone users answer tethered calls directly from the watch. Android users have been able to do this all along, but it’s a first for a Wear OS watch to allow iPhone users to do the same.

Lastly, Fossil’s also added more advanced heart rate sensors and a built-in Cardiogram app. While Wear OS watches have always been able to track heart rate, Google Fit was pretty limited when it came to in-depth heart rate data. With Cardiogram, you’ll purportedly be able to access “interactive charts” and monitor how your metrics compare to other Cardiogram users for “signs of undiagnosed diabetes, sleep apnea, hypertension, and atrial fibrillation.” Those are some bold claims, and we’ll have to test out the Gen 5 for ourselves to see whether they hold any water. That said, any kind of update to Wear OS’s heart rate tracking is a welcome one.

There a few other tweaks—you get double the storage of previous Fossil watches (8GB total) and more RAM, which should translate to better overall performance.

These are all good things, but it’s still Wear OS playing catch-up to Apple, Samsung, and Fitbit. That’s not really Fossil’s fault; of all the Wear OS brands, Fossil is seemingly the most dedicated to the platform—one reason why Google recently bought $40 million (£33 million) worth of Fossil’s smartwatch tech. It’s just that Wear OS has been hampered time and again by that blasted 2100 chip, and despite earlier hopes, it doesn’t seem like the 3100 has resonated with smartwatch makers. That’s disappointing as Wear OS 2.0 and the 3100 chip made for a pretty decent smartwatch in the Fossil Sport. In any case, rumour has it Qualcomm is developing yet another chip meant to fix all these issues. But until that happens, the Gen 5 smartwatches will probably some of the most affordable 3100 options out there.