First announced last October, Adobe Fresco is the company’s next-generation painting and illustration app for tablets that harnesses AI smarts to allow artists to work with digital tools that behave and feel like traditional brushes and paints. We got an early look at the app before its release later this year, and while it’s missing a few key features, it’s still an exciting look at the next big evolution of mobile devices like the iPad.

The iPad started life as seemingly nothing more than an oversized smartphone. Apple positioned it as a media consumption device; better suited for reading and watching movies, but over the years the iPad has grown to be something more. When productivity apps like word processors and spreadsheets arrived the tablet soon became a viable alternative to a laptop, and when the Apple Pencil was released, artists were finally able to embrace the iPad as a genuine creators’ tool, and many wondered if their days tethered to a desk and workstation would be numbered. With Adobe Fresco, and the upcoming release of a full version of Adobe Photoshop for the iPad, it now seems inevitable—but there are going to be some transition pains.

I’ve been using Adobe software like Photoshop and Illustrator for over 20 years now, and the first thing that stands out when you open Adobe Fresco is that its interface feels very familiar; especially when compared to Adobe’s existing mobile apps which are lightweight versions of the company’s desktop creation tools, stripped down and optimised for tiny screens and finger taps. 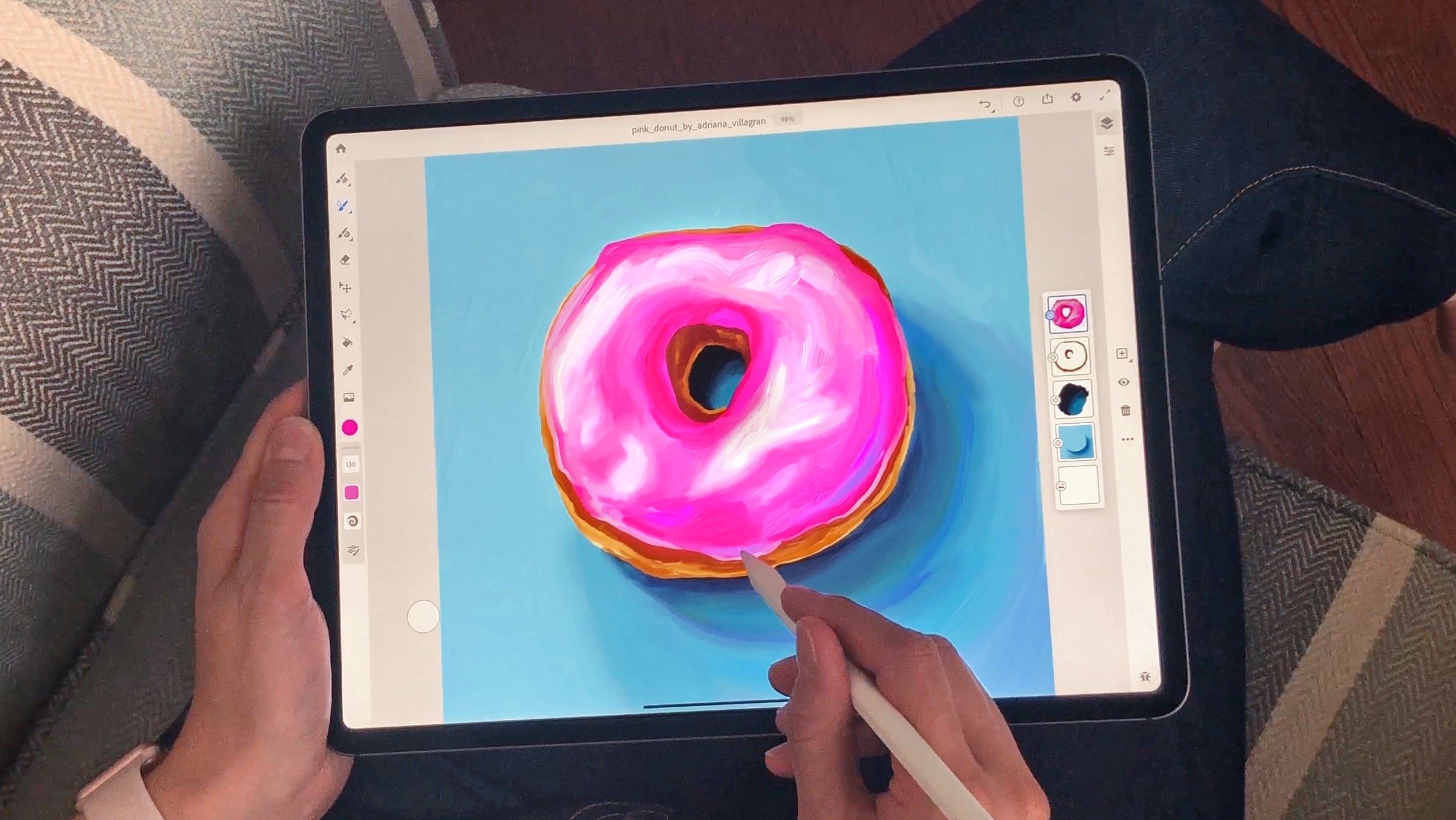 Fresco’s interface isn’t a direct copy of what you’ll find on Adobe’s desktop apps, but it’s still very recognisable and manages to balance the two approaches quite well. Adobe’s familiar vertical toolbar can be found on the left side of the screen, while a streamlined version of Photoshop and Illustrator’s layers stack is on the right.

Adobe Fresco isn’t designed to be a replacement for either Photoshop or Illustrator, but instead, compliment them as a better tool for creating painted or illustrated elements. To accommodate the workflows of Adobe’s desktop tools, Fresco allows users to work with both Illustrator-friendly vector-based brushes and Photoshop-compatible pixel brushes, in the same document. The pre-release version of Fresco I tested didn’t fully support Adobe’s Creative Cloud services yet, so I wasn’t able to easily pass projects between it and Photoshop or Illustrator, but Adobe promises that hopping into Fresco to edit or add elements will be a seamless process.

Fresco is more than just an add-on tool for existing Adobe workflows, however. It’s also an excellent standalone app for anyone who likes to paint or wants to try their hand at painting and illustrating without splurging on art supplies. Adobe leveraged the AI capabilities of its Sensei platform to create a new Live Brushes tool that simulates the experience of painting with oil paints of watercolours. The paints mix and bleed into each other on the canvas as you work, and even affect the colour and shape of previous brush strokes. The Live Brush feature is genuinely fun to play with, but it also allows traditional artists to carry overfamiliar workflows to the digital world, such as manually mixing paints on the canvas to create new shades.

What’s even more interesting about Adobe Fresco is that it gives us a first look at Adobe’s efforts to not just replicate its familiar UI on tablets, but advance it by taking advantage of the unique capabilities of a touchscreen device. You can quickly undo your last edit by simply double-tapping the screen with two fingers, and tapping the Apple Pencil twice brings up Fresco’s colour picker. Adobe has also introduced an extra on-screen shortcut button that can be reprogrammed and repositioned giving quick access to a specific function. In Fresco it was mostly limited to switching between your current brush and the eraser tool, but Adobe promises more customisation later on.

One thing missing from the version of Adobe Fresco I tested, however, was keyboard shortcuts. I use a keyboard with Photoshop like a concert pianist uses a piano. It’s all muscle memory for me at this point, and I didn’t realise how dependent I was on them until they weren’t there. That’s not to say they won’t be included once Fresco is finally available, but it represents one of the bigger challenges Adobe is facing when it comes to transitioning its software from a PC sitting on a desk, to a tablet sitting in a user’s lap: accommodating how the company’s existing user base works.

To make a robust app like Fresco work on the limited screen real estate afforded by a single-screen tablet like the iPad, Adobe has had to evolve its approaches to UI (gone are the endless drop-down menus at the top of the screen) but I found there to be a steep learning curve as I started to dig deeper into the toolset and work with more advanced features of the software like selections and masking. That’s not a bad thing, though. I’ve no doubt that when Photoshop finally arrives on the iPad there will be lots of users complaining about the changes Adobe has made to its interface and how its tools are used on a touchscreen, but after testing Fresco for a little over a week, I’ve come to realise that I’m eager to accept those changes and adapt to them.

It’s going to be a bumpy transition, but the freedom afforded by having these powerful tools available on a device as portable as the iPad will be well worth it. Adobe’s decision to finally transition full versions of its software to these mobile devices had me excited. Yet using what is arguably one of the most advanced digital painting tools available while sitting on a dock next to a calm blue lake was what sold me on Fresco. The iPad promised to set us free, and with Fresco, Adobe has shown that it’s a promise that doesn’t necessarily have to come with compromises.