Facial Recognition System for Getting Drunk More Efficiently Is Coming

Facial recognition systems have, to date, proven to be biased, unjust, flawed, and deeply powerful. They’ve been deployed as tools of surveillance, oppression, and authoritarianism. And now one is going to track your drunk face at the bar.

The system, called “AI Bar,” was developed by British data science company DataSparQ, and it uses facial recognition to identify when someone approaches a bar, logging their face on a video screen and adding them to a running queue. The service uses a standard webcam and a display screen, according to a press release from the company.

Here’s how it works: you walk up to the bar. A camera identifies your face, throws it up onto a screen that faces toward the patrons with a little green circle around it. It adds you to the queue, also visible on the screen, with your number in line and estimated wait time based on the drinks ordered ahead of you and the amount of time they’ll likely take.

Based on a video promoting AI Bar, there will also be an icon next to your face if the system flags you as appearing under 25, which will prompt the bar staff to check their ID. And the company stated in the release that another feature called “FaceTab” will add people’s faces to a bar tab so that only those identified can put drinks on that bill.

The system also memorises someone’s drink orders, the company claims, and can remember your face for “a short period of time” in the event that you briefly abandon your position at the bar. The company also claims in the video that “no facial images are stored,” but in a press release, states that faces and data aren’t kept and are “deleted within 24 hours,” implying that, perhaps for a short window, that information is stored somewhere. We have reached out for comment on where it is stored and how the company ensures it is stored securely.

The stated purpose of the technology is admirable—making lines at bars less hellish and helping pubs remain opened by getting more drinks into people’s hands (and in turn, more money in their pockets). John Wyllie, Managing Director of DataSparQ, said in the press release that they are in talks to roll out the system nationwide in the next year. 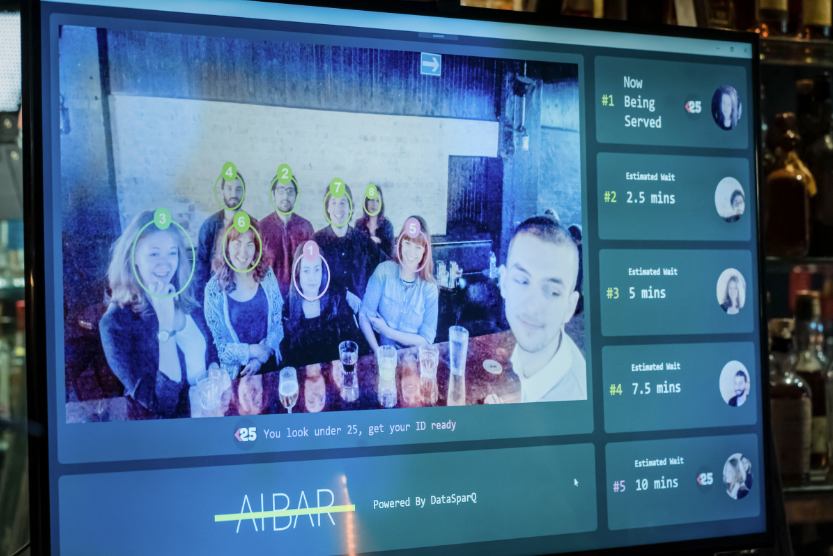 Queues do suck, and in a crowded bar, there’s hardly an orderly and fair system when it comes to who gets served first. But there’s nothing quite as sobering as seeing your thirsty face beamed onto a screen for all of your fellow bar-goers to see. Minimising chaos is not an inherently ignoble cause, but installing facial recognition systems at a place of leisure to achieve that goal is merely displacing an accepted social nuisance with an unsettlingly dystopian vibe.

Let’s also recognise this for what it is: The first step in automating bartending.

And, frankly, going out and getting a little shitty with your friends at the bars comes with the expectation of some disorder. While it might be a bit of a deep sigh elbowing your way to the front of the bar, it pales in comparison to a bleak new reality of powerful surveillance systems enforcing law and order.