Kealoha Pisciotta used to journey up Mauna Kea in Hawaii for work. A Native Hawaiian (or Kanaka Maoli), Pisciotta worked at the Joint Astronomy Centre for some 12 years helping tune and care for the telescope instruments. She liked her job and aspired to become a cosmologist someday, studying the galaxies for a living. Then, everything changed.

“I can remember the day that I really turned that corner when I started to realise that the human landscape was becoming dominant, and the sacred landscape being pushed down and suppressed and tampered with and destroyed,” Pisciotta told Gizmodo.

Mauna Kea – a mountain sacred to many Native Hawaiians who have been using it as a place of worship for centuries – was transforming before Pisciotta’s eyes. By the 1990s, she saw the cultural, natural landscape of the nearly 4.2-kilometre-tall mountain become more of what she called a “humanscape”.

That’s when she started speaking out to protect this sacred place. After 25 years, Pisciotta’s efforts have a renewed focus. The Thirty Metre Telescope, otherwise known as TMT, would be the world’s largest telescope and have the ability to gaze deep into space and time. But it has been opposed by Native Hawaiians and a growing number of academics who see it as a form of scientific colonialism. Hundreds of protesters have been gathering at the mountain since July to stop construction from starting on the TMT.

Mauna Kea is the latest manifestation of an energy has been bubbling for years now among indigenous activists. Indigenous communities from around the world are no longer sitting back and allowing corporations, governments rooted in colonialism or private interests to trample their sacred lands.

We’ve seen what these mobilisations can look like in Standing Rock, in Canada and the battle to stop the Trans Mountain Pipeline, and in Brazil where tribal nations have been protesting the loss of their land (especially now that they have a fascist in office). Indigenous people are demanding governments, developers and even academics respect their tribal sovereignty. And they won’t quit until they’re taken seriously.

In North Dakota, the movement of all movements dominated headlines in 2016. The Standing Rock Sioux Tribe brought thousands of people together, including some First Nations people travelling from as far as the Ecuadorian Amazon to challenge a massive crude oil pipeline that would cross their ancestral burial grounds and nearby water bodies.

This certainly wasn’t the first time indigenous people came together to combat a giant company, but Standing Rock signalled a breakthrough of this growing effort from indigenous people on an international stage. There was an urgency around ending fossil fuel infrastructure construction and consumption in the era of climate change. The protests also arose, however, around the issue of consent. The tribe alleged that developer Energy Transfer Partners never properly consulted them to build the 1,886-kilometre-long Dakota Access Pipeline across parts of their land, something the company disputed. Many tribal members didn’t want to see their prayer grounds overrun by fossil fuel infrastructure that could also threaten their water and resources should a spill happen.

The frontlines of the battle at Standing Rock against the Dakota Access Pipeline in North Dakota back in 2016. Photo: AP

“We’re trying to not only protect our sacred places,” Tara Houska, a tribal attorney with the indigenous organisation Ginew Collective, told Gizmodo. “We’re trying to prevent further desecration of these places, as well.”

Similarly, the Native Hawaiians who have rallied at Mauna Kea don’t want to see their lands degraded any further. As the first people to inhabit these lands, their opinion should count for something, right? Well, not everyone sees it that way.

The Dakota Access Pipeline was completed despite widespread opposition. And the TMT International Observatory – the group of partners behind the telescope – still plans to bring the project to the summit of Mauna Kea despite project leaders recently applying for permits at an alternative site in the Canary Islands. The Hawaiian Supreme Court has approved the telescope’s construction, so no real legal barrier exists to stop the project for now. Opponents are still filing lawsuits, but none has resulted in an injunction or pause to construction.

It’s important to note that the protests aren’t an attempt to thwart science. They’re about protecting a sacred place.

In addition to the legal battles, folks are betting on the power of prayer and protest to stop the construction of the massive telescope. If construction vehicles can’t reach the summit, then construction can’t happen. And if their actions open the world’s eyes to what this land means to Native Hawaiians, the outpouring of support could permanently put an end to construction.

That may not have worked at Standing Rock, but it almost did (until Donald Trump entered the White House). And since then, indigenous organisers have learnt many lessons. The fight at Mauna Kea is much more organised than the last face-off in 2015 over the telescope, said Noelani Goodyear–Ka‘ōpua, a political science professor at the University of Hawaii who studies indigenous sovereignty and has been protesting at the mountain.

“We’re at a moment where people are looking to indigenous people and seeing these struggles and understanding that we are protecting these sacred places and willing to put our bodies on the line.”

Some of the people who’ve come to Hawaii to protect the mountain spent time at Standing Rock. Others have participated in acts of solidarity with First Nations in Canada to protest oil pipelines.

“There are active networks and sharing of knowledge and solidarity with one another,” Goodyear–Ka‘ōpua told Gizmodo. “There’s the practical aspect of it, and there’s also the cultural and philosophical and ethical connections where we’re all in so many ways organising for similar causes against similar forces. It may not be exactly the same configuration of corporate power and settler-state governments, but essentially that’s what we’re all organising against: the combination of settler-colonial state government enforcing the interests of corporate powers over indigenous peoples.”

It’s hard to say exactly why these efforts have been growing in recent years. Social media has kept people more connected, Houska said. Platforms like Twitter and Facebook make it easier to find out what’s happening oceans away. Still, social media alone isn’t enough to explain the rise in concerted indigenous activism.

As Houska notes, a cultural awakening is taking place among tribal communities as they heal from the traumas of colonialism and genocide – histories that many living today still remember. And this awakening is happening alongside an urgent realisation that Earth is becoming unstable in the face of human activities. That, too, is a likely contributor to the newfound energy that indigenous people haven’t seen since the American Indian Movement of the 1970s, which also tried to push forth tribal sovereignty. 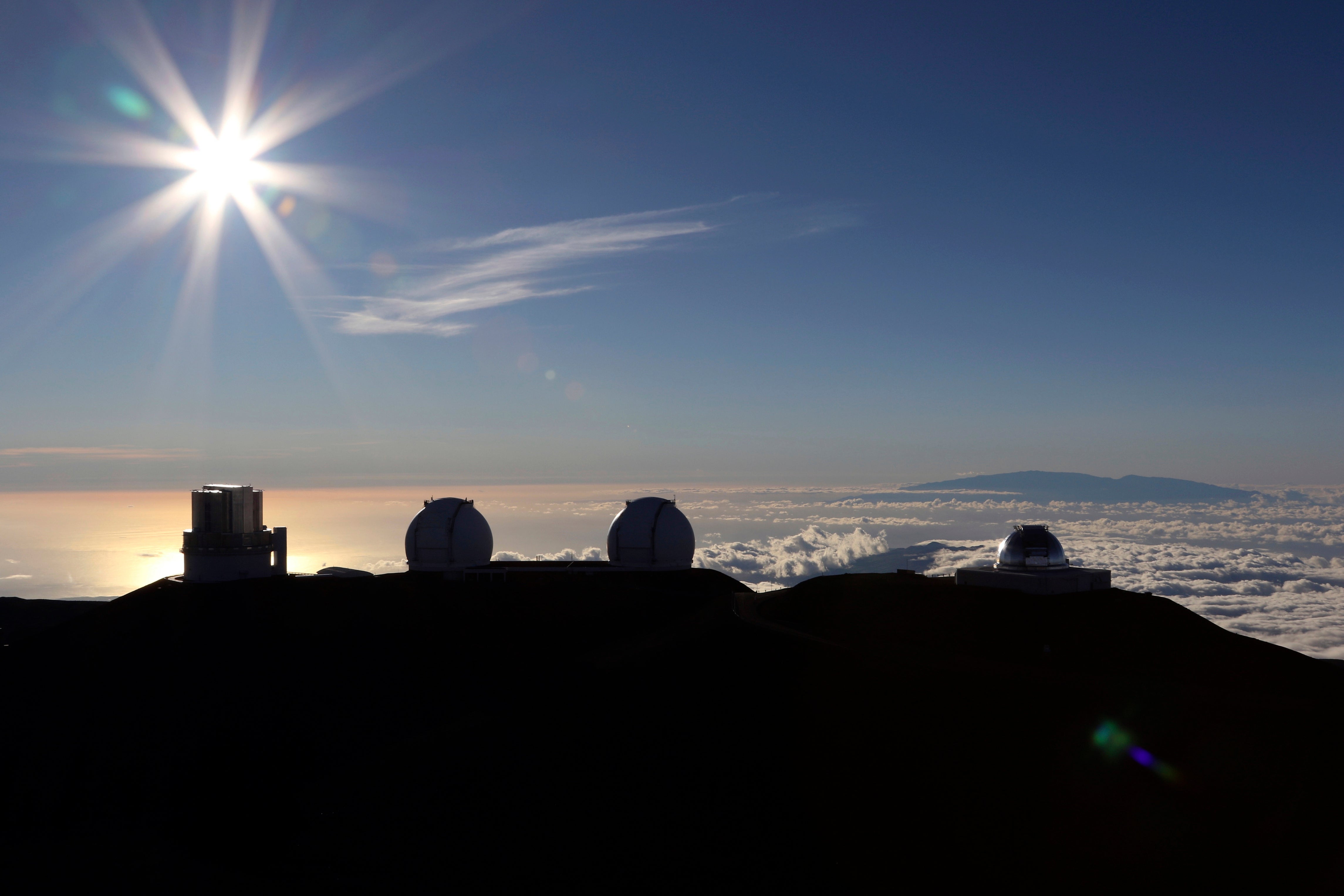 All these telescopes already sit atop Mauna Kea. Photo: AP

“So with all those things, we’re at a moment where people are looking to indigenous people and seeing these struggles and understanding that we are protecting these sacred places  and willing to put our bodies on the line,” Houska told Gizmodo.

And their bodies will remain on the line. From the top of Mauna Kea to the frozen Arctic where Alaska Natives are challenging oil and gas infrastructure on the pristine Arctic National Wildlife Refuge, indigenous people are rising up to protect what they hold sacred. If people around the world can cry about the burning of Notre Dame, why can’t they rally to save what remains of indigenous people’s land? For them, it’s not just dirt and grass. The land serves as temples, guides, relatives.