For most people, MSI is synonymous with big, powerful gaming laptops. But thanks to the number of aspiring video editors, 3D pros, and other digital artists, there’s a growing demand for systems with gaming-level performance, but tweaked for other applications. To meet this demand, MSI is announcing its new Content Creation Series laptops which are split into three general tiers: the entry-level Modern line, the mainstream Prestige line, and the high-end Creators line.

For all of these systems, MSI leans on its expertise making beefy gaming systems and then swaps in styling and components to suit customers who might not need or care about high refresh rate displays or flashy RGB lighting. 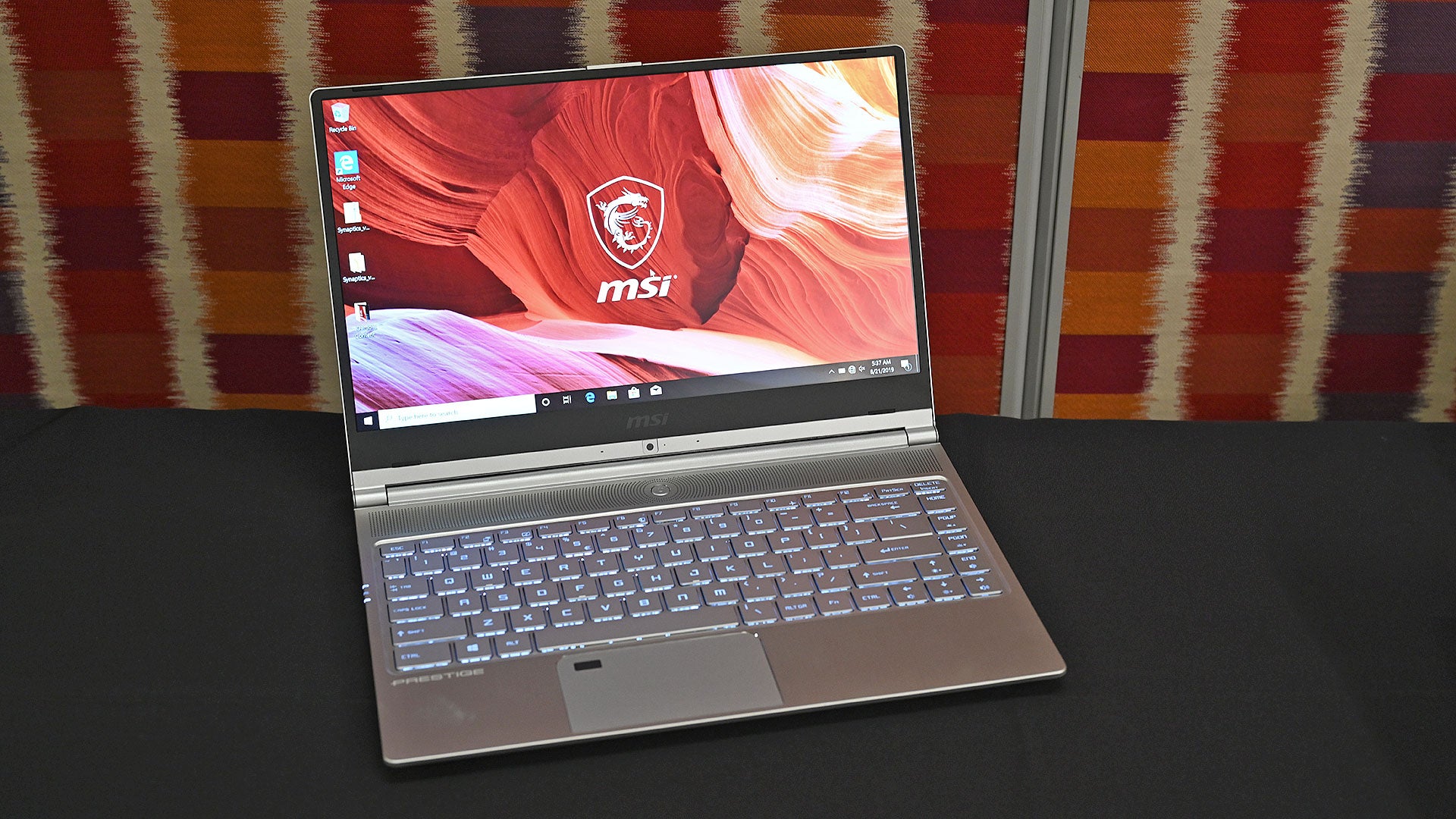 The Modern 14 is MSI’s entry-level offering, which starts at a very reasonable $750 in the US. (Photo: Sam Rutherford/Gizmodo)

So out goes MSI’s traditional red-and-black colour scheme and in comes a more subdued palette of silver and dark metallic blue, while the 144Hz and 240Hz displays found on MSI gaming machines make way for panels with wider colour gamuts and 4K resolutions.

Starting at $750 (£618; UK pricing and availability TBA), the Modern 14 looks to compete with systems like the MacBook Pro 13 and XPS 13 as a general-purpose ultrabook that can handle some more powerful tasks. The base model comes with a 10th Gen Intel Core i5 CPU, 8GB of RAM, and 256GB of storage, with an optional Nvidia MX 250 GPU and 14-inch 4K display if you want it.

All Prestige systems will also come with an included Ethernet dongle, so you won’t have to settle for wi-fi speeds when you need to upload a big video file. (Photo: Sam Rutherford/Gizmodo)

Including a full HDMI out port is a nice addition for on-the-go creatives too. (Photo: Sam Rutherford/Gizmodo)

The touchpads on all of MSI’s content-minded laptops are exceedingly wide. (Photo: Sam Rutherford/Gizmodo)

However, the real stars of MSI’s Content Creation Series are the new Prestige laptops, which consists of a 15-inch model that starts at $1,400 (£1,154; UK pricing and availability TBA), and the slightly more portable Prestige 14 (price still TBD). These machines feature brand new aluminium chassis with extra-wide touchpads (since unlike gamers, content creators won’t always want to tote an external mouse around), and support for up to Nvidia GTX 1650 GPUs, 10th-gen Intel CPUs, and MSI’s “True Pixel” displays.

True Pixel Displays are one of the most significant points of differentiation between MSI’s gaming machines and laptops made for content creators. Instead of delivering high refresh rates, True Pixel displays focus more on colour and image quality while also hitting four main criteria: support for 4K resolutions, a colour gamut that covers 100 per cent of the Adobe RGB spectrum, colour accuracy ratings with a Delta E of under two (lower numbers are better), and factory colour calibration certified by Calman.

The Prestige 14 and 15 get some welcome concessions to usability because instead of the barrel style adapter MSI uses on the Modern 14 and most of its gaming laptops, the Prestige line supports charging over USB-C. MSI also added a couple of quirky features like the ability to open a full 180-degrees, which allows it to transform into a weird presentation mode, with the laptop even sporting a dedicated screen rotation key. That said, right now, MSI doesn’t have any concrete plans to dive into the world of convertibles or 2-in-1s. 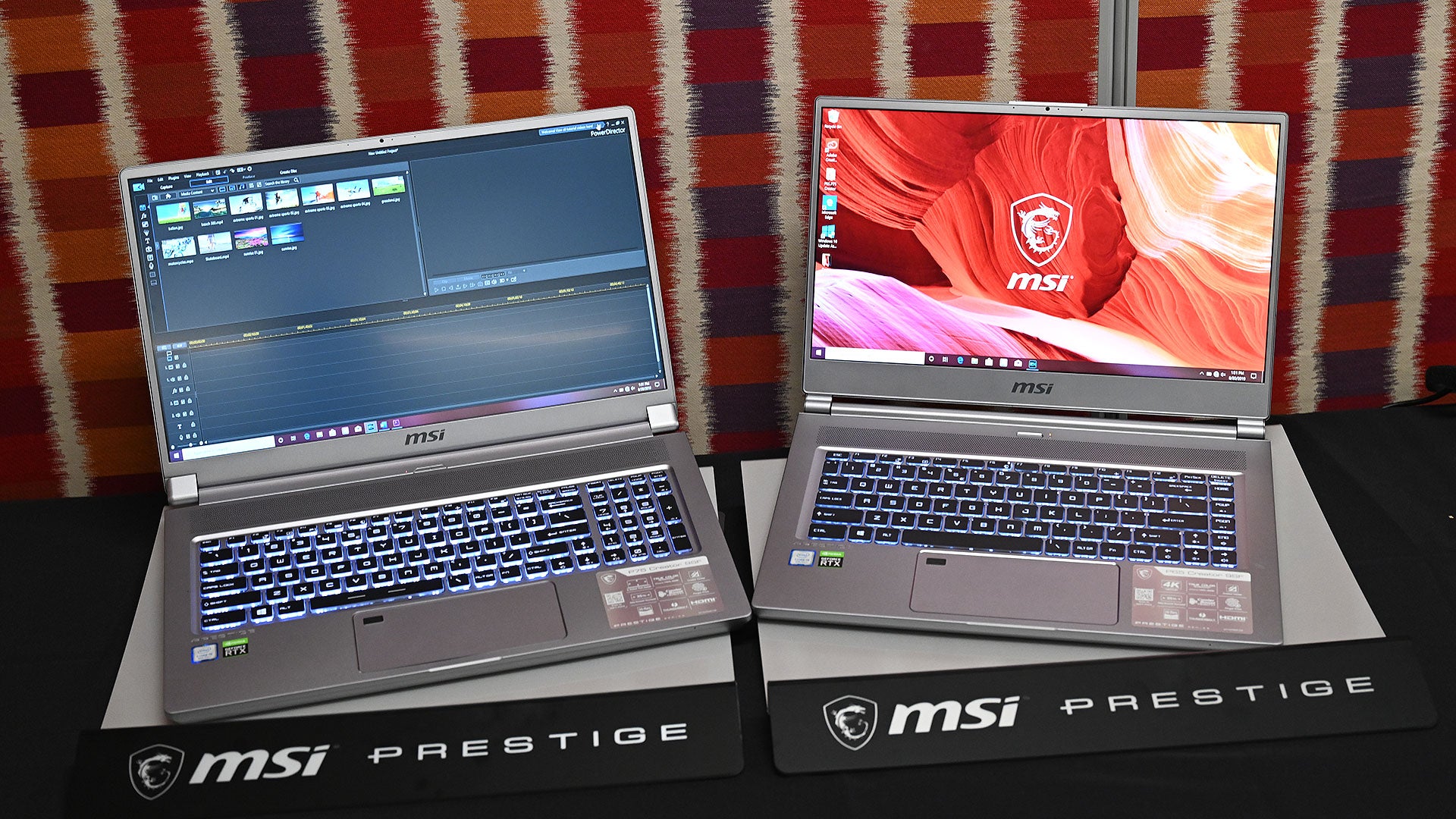 Finally, for anyone who needs even more performance, there are the 15-inch P65 Creator and 17-inch P75 Creator laptops, which are just revamped versions of MSI’s GS65 and GS75, but with more neutral, minimalist styling. Both models support up to 9th Gen Intel Core i9 chips and Nvidia RTX 2070 Max-Q graphics, along with optional MSI True Pixel displays. The P65 starts around £1,600, and the P75 starts at $1,700 (£1,402) in the US, with UK pricing and availability TBA.

From my brief time with MSI’s new line of laptops, the Content Creation Series certainly has the specs it needs to satisfy creators of all types. Additionally, MSI repurposed its gamer-centric Dragon Center software so that users can tweak the performance and priority of specific apps like Photoshop or Premier (right down to assigning a specific number of cores and threads).

But by moving into more general-purpose machines, MSI now has to contend with laptop giants like Apple, Dell, and others as the company looks to carve out a new niche in a very competitive market. And while MSI has done well by gamers, winning over the mainstream might not be so easy.

Most of MSI’s Content Creation Series laptops are available today, with the Prestige 14 and 15 scheduled to arrive later this autumn.